Mixed Results From the Climate Summit in Cancun, Mexico

The international climate talks in Cancun wrapped up with a deal that many categorize as a moderate agreement that helped put confidence back in the negotiation process. Alden Meyer, Director of Strategy and Policy for the Union of Concerned Scientists, tells host Steve Curwood about the progress made in Cancun and what negotiators will need to prioritize in South Africa next year. LOE also speaks with Grenada Ambassador Dessima Williams about the Cancun agreement.

CURWOOD: From the Jennifer and Ted Stanley Studios in Somerville Massachusetts, this is Living on Earth. I’m Steve Curwood. Next year’s climate summit is in South Africa. But what, in fact, was accomplished last week in Cancun? Well, there’s a deal to fast track lots of money to developing countries, and there’s a non-binding agreement to limit the warming of the earth to two degrees centigrade.

But the biggest accomplishment may have been renewed credibility for the UN process. As she boarded a bus after the summit, I asked Dessima Williams, she’s chair of the Alliance of Small Island States, for her assessment of deal struck in Cancun.

WILLIAMS: It’s a start. It’s a recovery mainly – it’s a recovery from the gloom and the pessimism of Copenhagen and what it does is that it restores our preparedness to work together, it prepares our faith in the multi-lateral system, and it puts some concrete initiatives on the table.

CURWOOD: For the first time a black nation will be chairing the climate negotiation process. How will South Africa do? 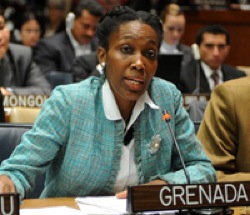 Dessima Williams is the Grenada representative to the United Nations. (AOSIS)

WILLIAMS: Well I can’t answer that until we go there, but I know that what has happened now, in the 21st century, is that there is a large group of middle-range countries, such as the Mexicos and South Africas of the world. And, they’re taking over control of certain strategic elements in international relations from the North. I expect South Africa will do very well. They have already a very strong set of initiatives for climate resilient development. So, we’re really looking forward to Africa benefiting, in terms of adaptation and financing from the conference that will be held in South Africa.

CURWOOD: How much do you believe the finance package here?

WILLIAMS: It’s only a start. We had a very bad year with the fast start, which was supposed to be ten billion dollars out the door – I don’t think any of that was really spent. So, I think financing remains critical because it has to correct the damage done, and it has to spark and get us out of poverty, so financials will be absolutely important for South Africa.

CURWOOD: Dessima Williams is Grenada’s ambassador to the UN. Alden Meyer of the Union of Concerned Scientists is a long-time observer of these international negotiations. He says the deal in Cancun left it up to negotiators in South Africa next year to tackle one central issue.

MEYER: There’s a huge gap between the level of emission reduction commitments and pledges that are on the table now from countries like the U.S., Japan, Europe, Canada, India, etc., China, and the two degree Celsius temperature increase limit that they established as a goal to stay below. There’s a huge gap there between what’s on the table and what’s needed to stay within that temperature limit, and they really didn’t make much progress on addressing that. 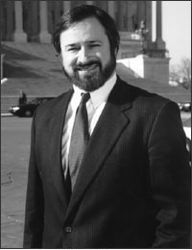 Alden Meyer is director of strategy and policy for the Union of Concerned Scientists.

MEYER: Well, I think on the legal form issue, it is fair, because I think even the administration had to acknowledge privately that the prospects of getting Senate ratification of any new treaty are pretty remote. The administration did continue to say though, that it will push for meeting the 17 percent reduction target the President put on the table in Copenhagen, even despite the absence of action by the Congress on a comprehensive climate bill.

They talked about how they would use existing executive authority in places like DOE, Environmental Protection Agency. I think obviously there will be a credibility issue on that over the next year if you see the Republicans and other opponents of Environmental Protection Agency actions succeed in handcuffing the administration’s ability to use that authority. The other big issue, of course, is climate finance, and there again the administration is struggling a little bit. They aren’t getting the increase they want, at least so far in the 2011 budget cycle, and of course when the Republicans take over the House next year, the prospects of getting a further increase in the 2012 budget request are pretty remote.

The interesting thing was, they came into this negotiation because of the failure of action in the Congress last year, in a weaker negotiating position than they were in Copenhagen last year. But, it didn’t seem to stop them from putting some pretty strong demands on the table for others, particularly for China and other developing countries.

CURWOOD: From what I saw in Cancun, it seemed that the U.S. and China were making nice. What did you see?

MEYER: I think that there was a clear shift between the atmospherics in Tianjin, which was the last meeting before Cancun in October, where there was a lot of rhetorical back and forth and bluster. For example, the head negotiator for the Chinese at the end of that week told a press conference that the U.S. was like a pig preening in the mirror. It got pretty down and dirty towards the end there. And, I think both sides consciously pulled back and tried to take a more constructive tone, I think both sides felt a little that the rhetoric that was getting overheated on climate was starting to affect the overall relationships.

But, the issues aren’t getting any easier. The problem as you know, Steve, is that the atmosphere doesn’t negotiate with politicians and we’re getting closer to some of those tipping points that scientists warn us about. So we have to accelerate the pace of change and action. Can we get enough done in time to really deal with what the science is telling us that we have to do, and there I think the jury is still out.

CURWOOD: Alden Meyer is the strategy and policy director for the Union of Concerned Scientists. Thank you so much, sir.

MEYER: Glad to be with you Steve.

[MUSIC: Boards Of Canada “Zoetrope” from “In A Beautiful Place Out In The Country” (Warp Records 2000)]