CURWOOD: From the Jennifer and Ted Stanley Studios in Somerville Massachusetts, this is Living on Earth, I’m Steve Curwood. Acting in response to a US Supreme Court ruling, the Obama administration began the new year by regulating global warming gases. The White House had hoped a cap and trade bill would make regulatory action moot. But a bill passed by the Democratically controlled House couldn’t get through the Senate in 2010 and with Republicans now controlling the House, prospects for such legislation are even dimmer.

The Court ruled the Environmental Protection Agency has the authority to regulate carbon dioxide as a pollutant under the Clean Air Act, and on January 2nd it started with vehicles. Regulations for power plants and businesses will soon follow. But some states call the rules an infringement of their rights. Pat Parenteau is a professor at the Vermont Law School.

PARENTEAU: EPA has set a new fuel efficiency standard which will reduce greenhouse gasses from light trucks and cars- the standard is 35.5 miles per gallon for the 2016 timeframe. So, this rule that just went into affect actually accounts for the largest single reduction in greenhouse gas emissions in the United States.

PARENTEAU: Well, it’s about nine trillion tons, actually, of CO2, as EPA has calculated it. 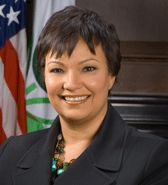 Lisa Jackson is administrator of the Environmental Protection Agency. (Courtesy of the EPA)

CURWOOD: Now, the EPA is set to launch into action regulations that would limit CO2 emissions from coal plants, electric companies, industrial emissions. How exactly would that work?

PARENTEAU: Yeah, that’s much more complicated, and obviously, more controversial. And, what EPA has done is developed what it’s called the tailoring rule, which is designed to apply their permit programs to the largest sources- those that would be in the 75,000 tons per year of CO2 emissions category. So, that would be large coal-fired power plants and oil refineries and perhaps cement plants and industries like that.

And, the way that rule would work is, if you are proposing to build a new source of that dimension, you have to get what is called a pre-construction permit, so you can’t even break ground until you’ve acquired a Clean Air Act permit. States will have to develop a program to implement these permits, and all of the states so far, except for Texas, have agreed to implement this new permit program for major new sources of CO2.

CURWOOD: What’s the beef with Texas?

PARENTEAU: Texas historically has resisted, you know, EPA running any of their air pollution, or water pollution programs. And, of course, Texas is very heavily dependant on fossil fuels. They have major oil refineries, they derive a great amount of their electricity from coal-fired power plants, so rules that are restricting of emissions from those sources are going to impact Texas industries, probably disproportionately, from many other states.

CURWOOD: Now, I understand that just Texas recently just took the EPA to court- what’s going on with that?

PARENTEAU: Yeah, this is very unusual because Texas has said, ‘we will not administer this new permit program, and, we don’t want EPA administering it.’ EPA adopted a rule right at the end of the year, on December 30th, literally, 2010, to allow EPA to issue these permits for industries in Texas that would be covered by this new tailoring rule. And, Texas is objecting to that- they don’t want these new rules to apply to Texas industries at all. And, I think it’s more about just creating controversy then it is about really expecting to win these lawsuits. If Texas prevails in this case, challenging EPA’s authority to actually issue these permits, the only thing they will have accomplished is that these sources in Texas that may need these permits won’t be able to get them. It’s hard to see how that’s a good outcome- for anybody.

CURWOOD: Now, the original Supreme Court ruling, Massachusetts vs. the EPA, mandates that the EPA regulate carbon dioxide if it is a threat to public health. It would seem to me that the agency is then legally obligated to make these regulations.

PARENTEAU: That’s exactly right. That’s EPA’s argument here, is, ‘we have a legal mandate under the Clean Air Act, to establish these rules. Now, we’ve tried to make them as flexible as possible, but we don’t have the option of not regulating them.’ So, that’s where the EPA is at this point.

PARENTEAU: That’s certainly what Texas and others are arguing. They have a very tough row to hoe there, because the courts defer to agency expertise on these scientific questions. The courts are not going to second guess the agency on a matter like that.

CURWOOD: What would be needed to overturn EPA’s mandate to regulate greenhouse gasses?

PARENTEAU: Ah, well, that’s when we get to Congress. And, certainly the House of Representatives under new leadership has vowed to block EPA’s attempts to enforce these new rules. In the Senate it’s less clear what’s going to happen. President Obama has vowed to veto any attempt to repeal EPA’s authority, and so we’re all just going to have to wait and see how this plays out politically.

CURWOOD: So, if you were running the EPA, Professor Parenteau, how difficult a scenario do you think you would be facing? I mean, how much would you be looking at in terms of budgetary cut backs and a lot of legal red tape as opponents to this regulation fight it?

PARENTEAU: Well, Chairman Upton, the new chair of the House Commerce and Energy Committee has told Lisa Jackson who is the EPA administrator that he’s reserving a parking space for her in front of the House of Representatives because he plans on having her up there, you know, virtually all the time in front of oversight hearings.

So, the EPA administrator is facing a really, really difficult political landscape. But I have to say, watching Lisa Jackson in action the last two years, I’ve been incredibly impressed with both how knowledgeable she is and how tough she can be in the face of pretty, you know, rigorous questioning from opponents of what she’s doing. She doesn’t lose her cool, but she’s not easily intimidated by that process.

CURWOOD: Pat Parenteau is an environmental law professor at the Vermont Law School. Thank you so much, sir.