Following this Deepwater Horizon disaster, President Obama set up a commission to investigate what went wrong. Host Steve Curwood talks with Frances Beinecke, president of the Natural Resources Defense Council and a member of the administration’s fact-finding commission, about the panel’s findings and what can be done to improve safety.

CURWOOD: When the Deepwater Horizon blowout spewed nearly five million barrels of oil into the Gulf of Mexico, President Obama put together a commission to investigate. The Commission has now released one key chapter of its final report - and it concludes that BP, Halliburton, and Transocean all used techniques that saved time - and money and - led to disaster.
What’s more, the commission says these problems are system-wide, making another blowout potentially right around the corner. With me is Frances Beinecke, president of the Natural Resources Defense Council and a member of the White House commission. Welcome to Living on Earth! 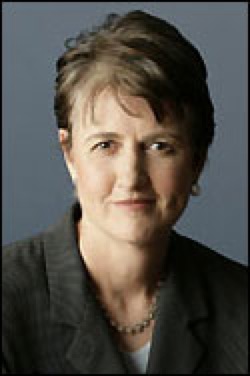 BEINECKE: Thank you Steve, pleasure to be here.

CURWOOD: First, I have to say, that’s quite distressing that your report says that, without major changes, another incident like the blowout in the Gulf, is likely. What changes in federal regulation should be made to prevent another accident, do you think?

BEINECKE: Well Steve, I think there are two things that have to happen. Part is the responsibility of the government and the other is the responsibility of the industry. Starting with the government, clearly the Interior Department didn’t have the capacity to provide the oversight required to ensure that the offshore operations were conducted as safely as possible. And, that goes to expertise and resources. You know, the industry has gone further offshore, and more complex environments, but the Interior Department has not received additional resources to deal with that more complex situation.

On the other side, it is very incumbent on industry to develop a series of standards and develop a safety culture, which ensures that the whole industry, every company operates at the highest level. And, I think what really surprised and shocked us was that that wasn’t the case. And, they don’t have a culture in the companies, or across the industry to ensure that a safety culture is the primary operating principle. And, that’s what the commission report is really focused on- how to change that.

CURWOOD: If the federal government gets more involved in regulating this, it’s going to cost dough. What are the prospects of getting that kind of support out of Congress for changes?

BEINECKE: Well, I think, of course, that’s a very, very important issue. Now, you have to remember that the offshore oil and gas leasing program provides the second highest source of revenue to the federal government after the tax dollar. This is an enormously lucrative program to the federal government totaling billions of dollars. So, it’s imperative, really, that the Interior Department have a few hundred million, literally, to deal and provide the oversight for a multi-billion dollar industry. You know, in this instance, federal government has to make the investment to make sure that it’s done safely.

CURWOOD: And, what about the argument that tighter regulations are going to lead to higher costs at the pump? We see gas prices going up, up and up as we’re speaking.

BEINECKE: Well, gas prices certainly are going up, up and up, and this is not the reason for it. How prices are set is independent of that. But, you know, my view of this is we can’t afford not to do this. I think that the American public expects that if we’re going to drill in the offshore environment after what we all witnessed this past summer, that we should be operating at the highest international standards, in fact, we should be creating them.

BEINECKE: There was no single mistake, there was a whole series of judgments as that well was being drilled, and particularly as they were trying to seal off the well, after the exploratory drilling had occurred. And, the complexity of it is enormous- I mean, you have to realize that they were basically drilling it at over 18,000 feet from where the rig sat- just imagine how complex it is to know what’s happening 12,000 feet under the sea floor.

And, in many different instances with cementing, negative pressure tests, closing down the well- there were judgments made that were sort of maybe the quicker, faster way to resolve the issue, but they didn’t do a full risk analysis of what each of those decisions resulted in. So, when the well started to kick, a lot of things went wrong. And, you know the safety procedures that one would think would be in place, really weren’t.

CURWOOD: Your commission is only issued one chapter out of its report so far, what should when we expect when we get to see the whole report?

BEINECKE: When you get the report as a whole, it will paint a broader picture, not only of what happened that day, but what the response was. You know, how long it took to contain it, what it took on the ground to control the oil that was coming ashore, and how devastating the economic and social implications were all across the Gulf Coast- what happened to the Gulf fisheries.
So, when you get the whole report it’s going to paint a much broader picture of what the experience was as a result of the Deep Water Horizon blowout and what needs to happen, not only from industry developing a much stronger safety culture, to what the Interior Department responsibility, to what kind of scientific research is necessary both in the Gulf and in new areas in which they want to explore, and how to improve the response should a spill like this ever happen again. And then, finally, how do you restore this incredibly productive and rich ecosystem- how do you make that Gulf coast resilient in the future so that its productivity is maintained?

CURWOOD: Frances Beinecke is the president of the Natural Resources Defense Council and a member of the White House fact-finding commission on the Deep Water Horizon blowout in the Gulf of Mexico. Thank you so much.

BEINECKE: Thank you, Steve, very much. A pleasure to be here.