What would have been the largest mountaintop removal coal mine in West Virginia history was denied a permit by the Environmental Protection Agency. Charleston Gazette reporter Ken Ward tells host Bruce Gellerman that the agency decision isn’t the last word in the process.

GELLERMAN: From the Jennifer and Ted Stanley Studios in Somerville, Massachusetts, this is Living on Earth. I’m Bruce Gellerman. In some places the fastest and cheapest way to extract coal is to blow the tops off of mountains, and then dig the seams exposed beneath the summits. It’s called mountaintop removal mining. The rock and rubble that’s left after the peak's been dynamited winds up in the valleys and streams below.

As you might expect the method has long been controversial. But now it’s come to a boil. In a rare move, the EPA recently denied Arch Coal permission to begin mountaintop mining at its Spruce Number 1 mine in Logan County, West Virginia. Ken Ward, a reporter for the Charleston Gazette in West Virginia, covers all things mining. He says Arch Coal had big plans for Spruce Number 1.

WARD: It’s the largest single mountaintop removal permit ever issued in the state of West Virginia. When it was originally proposed it was 3,113 acres. The new version of it, which was vetoed by the EPA, was just under 2,300 acres.

GELLERMAN: So what was EPA’s reason for denying the permit?

WARD: EPA said that the mine would have caused unacceptable damage to aquatic resources by burying something like seven miles of streams in the Pigeon Roost Hollow area of Logan County, West Virginia near the community of Blair.

There was a small bit of mining going on in that same area and EPA has been monitoring that small bit of mining that was going on under a court agreement and found that there’s already very high levels of conductivity in pollution in the streams down from where that limited mine was going on. So EPA was concerned that this mine, if it did expand, it would get even worse.

GELLERMAN: Now, I know back in 2009 EPA had warned Arch Coal that it was going to deny the permit if they didn’t make changes.

WARD: That’s correct. EPA from the start, even under the Bush Administration interestingly enough, has been very concerned about this mine. As have local citizens and statewide environmental groups and national environmental groups. The EPA has consistently raised questions about this mine and when the Obama administration came in they took those concerns to a new level and said, “We’re considering vetoing this mine using our very seldom used authority to overrule the Army Corps of Engineers decision to issue a Clean Water Act permit.”

GELLERMAN: Didn’t they make some changes?

WARD: Well they did, but this is a mining proposal that goes back to the mid to late 90’s when the mountaintop removal issue was really starting to heat up. And as a result of some litigation and EPA objections, Arch Coal did make some changes in this mining proposal, reducing its size from 3,100 acres down to about 2,300, and reducing the length of streams that would be buried. EPA said that that was not enough and EPA maintained throughout the last year or so, that there were other alternatives, and that there were things that the company could do. 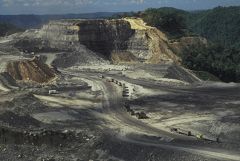 Mountaintop removal coal mine in Appalachia. (Courtesy of the Sierra Club)

And in fact, EPA paid a contractor, an engineering firm out of Kentucky -- Morgan Worldwide -- to do an analysis of the mine. And Morgan proposed a number of changes in which the company could have reduced the length of streams that they would fill by about fifty percent, at a cost of just maybe 55 cents per ton of coal mined. The company didn’t want to go along with these sorts of changes.

GELLERMAN: And now they’re not going to dig any coal from there.

WARD: Well the company hopes that it will. The company has a lawsuit filed in federal court in Washington against the EPA, challenging EPA’s authority to step in and try to veto this permit. Now that EPA has finalized its veto decision, what we’ll probably see that case start to heat up.

GELLERMAN: So here the Army Corps of Engineers signs off on it, says, “Okay, let ‘em go,” and the EPA turns around and says, “No, no no!” It sounds like they’re mis-communicating.

WARD: Well I don’t know if it’s miscommunication as much as maybe a different way of looking at things. And, you know, the Corps of Engineers has a long history of approving these sorts of permits and their actions have been criticized by federal judges and others that they’re going too easy on these companies and issuing permits that don’t properly consider the potential environmental impacts.

So that’s what EPA has done here -- stepped in on a rare occasion for thousands and thousands of permits that are issued every year under the Clean Water Act, this is only the thirteenth time that EPA has ever stepped in to veto a permit. It’s the first time that they’ve actually vetoed a permit that had already been issued by the court.

GELLERMAN: So, implications for other mountaintop removal projects that are in the works?

WARD: Well, we don’t know because at about the same time that the EPA was announcing that it was going to veto the Spruce mine, a federal judge in Washington in a somewhat related case ruled that the National Mining Association might have a point when it argues that some of EPA’s efforts to rein in mountaintop removal have been done contrary to law, by EPA issuing guidance documents and things like that without first allowing public input on those documents. The judge in that case didn’t issue an injunction against EPA, but did indicate that he thought that perhaps EPA might lose on the merits of the case. We’ll have to see what happens with that.

WARD: Good talking to you, thanks for having me.

GELLERMAN: Ken Ward is a reporter for the Charleston Gazette in West Virginia.