The Man Working on a Clean Energy Plan 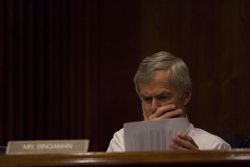 Host Bruce Gellerman talks with Democrat Jeff Bingaman, chair of the Senate Energy and Natural Resources Committee. His committee is charged with legislating a path to a “clean energy” future but he’s not convinced that should include nuclear power, “clean” coal, and natural gas.

GELLERMAN: Just as defining what’s renewable energy is debatable, so is the question: what’s clean energy? It’s a distinction with a big difference. In his recent State of the Union Address President Obama didn't mention renewable power once - but referred to clean energy no less than 5 times. He wants clean energy to generate 80 percent of the nation’s needs by 2035. The Senate Committee on Energy and Natural Resources will soon hold hearings on the president’s ambitious goal, and its powerful chairman, democrat Jeff Bingaman of New Mexico, thinks that's doable.

BINGAMAN: It is possible. There is a lot of action going on right now for conventional coal fired power plants that are being scheduled for shut-down. And some of that is just happening because of the economics – the price of natural gas is so low – we don’t have a clear path to get from where we are today to where the President wants us to be, but I think it is conceivable we could get there.

GELLERMAN: The President did mention 80 percent of our energy by 2035 from clean energy -

GELLERMAN: But he defines clean energy a little bit differently, it seems, than you do. You had your renewable electricity standard, and you don’t include some of the things the president does - he includes nuclear power and what he calls clean coal. 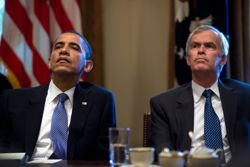 The President mentioned all three of those in his State of the Union speech. But I’m not proposing any of those at this point – what I am hoping we can do is to hear from some experts, to look at both how a renewable electricity standard operates, and then how that same type of system might work in the case of a broader defined clean energy standard like the President referred to.

GELLERMAN: The President in his State of the Union speech did not mention climate change, or greenhouse gasses - were you disappointed?

GELLERMAN: The President wants to support clean energy, in part by removing subsidies for big oil. That would be a real drop in the bucket - that’s like four billion dollars - that wouldn’t even be a down payment on some of the projects that, I think, you’re suggesting.

BINGAMAN: Uh, you know, I think that the truth is that the first two budgets that he sent to Congress since he’s been President, they also suggested that the various subsidies for the oil and gas industries be removed or eliminated. The Congress did not take him up on that suggestion. I’m doubtful that this current Congress will either. So there’ll be a struggle to figure out how to get the necessary revenue to do what the President is talking about.

GELLERMAN: Just a few years ago, the United States was a net exporter of green energy technologies and about eight billion dollars in the green, I guess you could put it, and now we’re about 14 billion dollars a year in the red in terms of importing green technologies. What can the US do to improve that?

BINGAMAN: Well, we need to do a whole range of things. And we clearly need to adopt policies that create more of a demand for clean energy products in this country. By doing so, we also attract the manufacturing for those products, and then we are in a position to export - so that’s one thing.

We need to provide more financial assistance to clean energy developers - people who are putting in wind farms and photovoltaic arrays around the country so that we can do better there as well. Other countries have just made this a very high priority. China in particular, has invested an enormous amount - is investing each year - an enormous amount in trying to capture this whole sector of industry - this whole clean energy sector.

GELLERMAN: Well, Senator, thank you very much. I really appreciate it.

GELLERMAN: Democrat Jeff Bingaman is Chair of the Senate Energy and Natural Resources Committee. Right after our conversation he met with President Obama in the White House to discuss energy issues - clean or renewable - we don’t know. Neither the White House nor Senator Bingaman talked to reporters after their meeting.


Click here for a critique of the president's clean energy strategy.