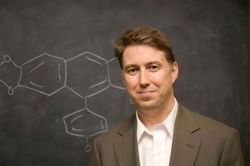 GELLERMAN: It's Living on Earth, I'm Bruce Gellerman. The Environmental Protection Agency recently turned 40, and like a lot of 40 year olds, the agency is taking a midlife look in the mirror - metaphorically speaking, anyway - and planning some big changes.
The EPA is undertaking what some call a 'seismic shift' in the way it works: making "sustainability" its central goal. To do that, the agency is counting on Paul Anastas. The EPA's top scientist has a long track record of putting sustainability to work. Living on Earth's Jeff Young has this profile.

YOUNG: The Environmental Protection Agency started in 1970, a time when smokestacks belched pollution and rivers occasionally caught fire. The problems were big and plain to see. EPA assistant administrator Paul Anastas says today's problems are big, but a bit murkier.

ANASTAS: When we start looking at complex problems like climate change, subtle problems such as endocrine disrupting chemicals - they are more complex, they are more subtle, and they're going to need a new approach, a new thinking. There's a great quote from Albert Einstein - he said, 'problems can't be solved at the same level of awareness that created them.'

YOUNG: Anastas leads EPA's office of research and development. He's also the agency's science advisor - in effect its top scientist. EPA's science has long rested on narrowly focused specialists deciding how much harm people and nature can tolerate. Anastas wants his scientists to think more broadly about systems and sustainability.

ANASTAS: Systems thinking means that we're going to be asking questions about how not only can we make things less bad - how do we make things better, more sustainable, more healthful. Sustainability is our true north.

YOUNG: So how might this approach that you're talking about make you better able to address a challenge like climate change?

ANASTAS: Well climate change is a key issue. Climate is inextricably linked to energy, energy inextricably linked to water, water to agriculture, agriculture to health, and we could go on and on. If we start saying that the entirety of our approach to sustainability is simply to reduce our carbon footprint or to look at any one aspect, then we will not be getting the power and the potential of the synergies of looking from a systems approach.

YOUNG: Now, forgive me if this is an unfair stereotype, but it's my impression that the agency generally goes about its business by - well, you have an expert who does water, and you have experts who do air. How do you get those different experts to all think horizontally as well as up and down?

Are they depleting, are they degrading of our natural ecosystems, are they benign to humans and the environment or are they inherently hazardous, are they resilient, or are they vulnerable? These kinds of questions are not easy questions. They just happen to be the questions that we must ask and answer if we're going to address these challenges systemically.

YOUNG: Anastas says the EPA is beginning to work this way in its assessment of toxic chemicals. That's the area where Anastas is best known. Terry Collins directs the Institute for Green Science in the Department of Chemistry at Carnegie Mellon University. He first met Anastas in the early 90's during his first stint at EPA.

COLLINS: He was a young chief of toxics at EPA, in his late 20's I think, and he'd been looking at the way the EPA functioned, which is really saying, 'No, you can't do that' or trying to say, 'No, you can't do that.' And he felt that the organization would be so much better off if it was instead encouraging industry to develop products and processes that weren't toxic in the first place. And he coined the name 'green chemistry,' and I really regard him as the father of green chemistry.

YOUNG: Anastas wrote many of green chemistry's most influential books and won the prestigious Heinz award for his vision of chemistry that eliminates toxic risks. He was director of Yale's Center for Green Chemistry and Green Engineering when President Obama tapped him for a return to service at EPA. A talk with Anastas makes clear that the sustainability effort at EPA owes a great deal to green chemistry.

ANASTAS: Green chemistry is the molecular basis of sustainability - recognizing that all we have in this world is energy and matter, energy and material, and how you redesign the material basis of our society and our economy so that they are sustainable and benign.

YOUNG: This does not sound like a tinkering-around-the-edges kind of change. You're talking about real, kind of, fundamental change about the way you guys go about business here.

ANASTAS: Yeah, this is a seismic shift. While I know that the public often doesn't think about the words 'EPA' and 'innovation' in the same sentence, this is not your grandfather's EPA.

YOUNG: Anastas knows the change he's after won't come quickly or easily. EPA has asked the National Academy of Sciences for help. Nearly thirty years ago the Academy helped shape EPA science with a publication called the Red Book.

It was a how-to guide on putting the principles of risk management to work at EPA. Now the Academy is considering a similar guide on how to incorporate the principles of sustainability. The academy's report, expected this summer, is already being called the 'Green Book.' For Living on Earth, I'm Jeff Young.


National Academy of Sciences panel on sustainability at EPA