Where the Antelope Played

Drill rig and well pad on the Anticline. At night the rigs sparkle like Christmas trees.

Recent natural gas discoveries in the eastern U.S. have changed the country's energy equation. But in the West a major gas rush has been underway for more than decade, and the conversion of landscape from rural to industrial continues there. Reporter Jason Albert tells this story of one corner of western Wyoming.

GELLERMAN: It's Living on Earth, I'm Bruce Gellerman. Sublette County, Wyoming is the size of Connecticut - but the population: just six thousand residents. Pinedale is the county seat and home to the Museum of the Mountain Man, which chronicles those who explored this vast, rural region in the 19th century. In the 21st century, it's the search for natural gas that draws attention to this part of big sky country.

The Jonah Field and the Pinedale Anticline are two of the largest gas fields in the nation. The deer and the antelope literally play atop the fields but the drilling is changing the landscape where they live'perhaps permanently. Jason Albert reports.

ALBERT: The mountain and sage lands in this part of western Wyoming are sometimes called the North American Serengeti.

BOTUR: There's a lot of country out there, and a lot of pockets for the antelope, the mule deer, sage grouse. ALBERT: That's Freddy Botur, a ranch owner outside of Pinedale. When winter snows pummel the big hills, herds of pronghorn antelope and deer come down to a broad table, or mesa, here. Winds brush aside the snow, exposing just enough grass and sage to sustain this big game.

ALBERT: Really important for the animals here because they burn crucial fat reserves once the Arctic air moves in. Rollin Sparrowe is a wildlife biologist with over four decades of experience. We meet in his cabin to escape the zero-degree cold.

SPARROWE: Winter concentration areas for mule deer in the Northern Rockies are the key to their future survival. The fate of the herd for that year is going to be determined by the condition of those animals coming off that winter range and heading back up to breed again.

ALBERT: But Sparrowe says he fears for this rhythm of big game that local hunters have tracked for generations. A decade ago, energy companies arrived. They call the mesa the 'Anticline.' It's rich with natural gas.

Some portions of the Anticline are off limits to energy operators during winter range closures. But operators may still drill and conduct maintenance year-round on many wildlife wintering grounds.

SPARROWE: In Sublette County about three years ago, there was 4 billion dollars of revenue from all the oil and gas and a lot of it was coming off the Anticline. And it was pretty clear that that was the big ticket to everybody.

ALBERT: Since then, this place has changed to its core.

ALBERT: On Pinedale's main drag, The Corral Bar and Grill and Stockman's Restaurant tell of the town's ranching roots. Weather, rain, and cattle futures used to be what mattered here - now, it's global gas prices. There's a rush hour here now, as heavy-duty 4x4's haul rough necks to the field. 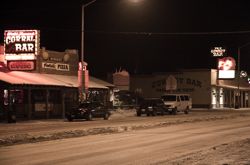 ALBERT: Williams hops into the company rig and heads to the gas patch. Beyond his windshield, mountains loom over vast sagebrush.

WILLIAMS: Well, the Anticline is basically an underground mountain. It was created when the uplift of the Wind Rivers and the Wyoming Range created a buckle in the crust that allowed for the gas to be trapped and not escape to surface and into the atmosphere. 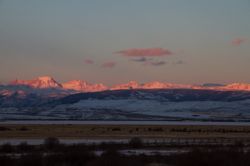 Sunset on the Wind River Range. A wild backdrop to the Anticline and its gas-drilling industrial din.

WILLIAMS: A lot of people liken it to a bowl of potato chips. You stick a straw in it, you only hit so many potato chips. Thus the need to drill more wells to be able to recover all the resource.

ALBERT: What he's alluding to becomes clear in a moment.

WILLIAMS: So you can see, you know about a mile and a half up is that rig, kind of same thing over there.

ALBERT: On squares of flattened earth known as wellpads, work crews drill while others prepare to 'frack' - the controversial practice used to 'fracture' bedrock to enhance gas extraction.

WILLIAMS: Red Halliburton trucks. You can see how they have piping coming off the back. So there's a pump - they're all manifolded together, getting ready to pump a frack job.

ALBERT: From here, it's hard to fathom the Anticline as anything but an energy patch. Yet Callie McKee from Ultra Petroleum has a trained eye.

MCKEE: You see the antelope out there.

Drill rig and well pad on the Anticline. At night the rigs sparkle like Christmas trees.

ALBERT: Energy operators have made concessions to wildlife here. In fact, many people point to this area as a model for progressive practices. One is a liquid gathering system. Wells here produce huge quantities of a gas by-product that liquefies at the earth's surface. This system captures the fluid in a lengthy series of enclosed pipes. Before, all this liquid had to be trucked to tanks - hundreds of them.

WILLIAMS: Between the three operators, we'll eliminate over 165,000 truck trips a year. So I mean that's a lot of trucks. And so you can imagine this is happening 24 hours a day, 365 days a year.

ALBERT: Thanks to gas, the coffers of Sublette County are fat. School classrooms are stocked with supplies. There's a gleaming aquatic center. Pinedale also boasts a new 'green' library, where solar panels capture sunlight and where I met Laurie Latta.

LATTA: To me, as a longtime Sublette County person who has watched communities die, when you see those young people coming in that are educated and have new ideas and they have good jobs and they can contribute to this community. I mean there are a lot of things about the oil and gas industry that you can say, 'Ooh that's bad,' but there are a lot of things that are good about it too.

ALBERT: For folks in Pinedale, like Latta, the radical landscape conversion is bittersweet.

LATTA: You know, my husband and my sons are hunters. They used to go south of Pinedale onto what is now the Anticline and hunt antelope, and it was a big family male-bonding experience, and they can't do that anymore. Because of course there's pipelines and roads and everything - it's not the way that it was before. My younger son - it particularly bothers him that he can't do what he loved to do as a child. Um, life is a trade off.

ALBERT: Once the wells are drilled and the rigs move on, the long-term tradeoffs are stark. Wellpads are bare. Federal and industry officials say sage-stripped hills will be replanted. Habitat will be returned.

But sagebrush ecosystems take decades to revitalize. Some here say, off the record, this area is a sacrifice zone for natural gas, and may never come back. In October, a report showed the population of mule deer down by more than half in the past decade.

ALBERT: But some places in the region, like that ranch belonging to Freddy Botur, who we heard from earlier, are being set aside.

Freddie Botur of the Cottonwood Ranches outside Pinedale.

ALBERT: Botur once feared his Cottonwood Ranches would be drilled. He does not own the mineral rights here.

BOTUR: My first year on the ranch, I was negotiating 3-D seismics, 2-D seismics, pipelines - I spent more time with lawyers than I did with anybody else. That was my first awareness that when you don't own mineral rights, you really are subservient to oil and gas companies.

ALBERT: But when the test drilling was done, it turned out there was no major gas on the ranch.

BOTUR: And my argument has always been, well there's very little gas here and so there's low energy potential and high wildlife potential. 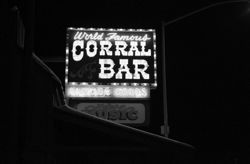 ALBERT: So Botur protected the ranch with a conservation easement, funded by energy companies. From a high place on the property, he looks down on crescent shaped Muddy Creek and miles of sage uplands.

ALBERT: In the new west, forever is not limitless. Botur squints and looks to the horizon.

BOTUR: To the east-southeast here, you can see a typical mesa. That's actually the Anticline. And if you were to come out here at night you can definitely see the lights. I mean this used to be one of the darkest places most people have ever been. And now it looks like Denver is on the horizon.

ALBERT: Up on the Anticline, a herd of forty pronghorn settle in deep, drifted snow. The reality is this stretch of western Wyoming offers highly concentrated gas under critical winter habitat. The antelope huddle close together. Not fifty yards away, gas wells gurgle and hiss. With a close listen, you can hear the breath of dinosaurs. For Living On Earth in Pinedale, Wyoming, this is Jason Albert.