Can REDD Work for the Amazon? 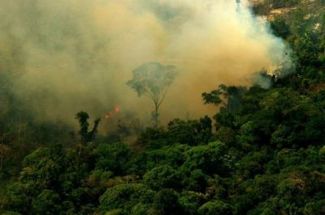 Historically, deforestation in the Amazon was attributed to slash and burn agriculture for raising soy or cattle. Increasingly, the forest is being degraded by drought, which stresses and kills trees. (Photo: Lou Gold)

Extreme drought has turned the Amazon rainforest into a source of carbon dioxide for two of the last five years. Brian Murray, director of Economic Analysis at the Nicholas Institute for Environmental Policy Solutions, talks to host Bruce Gellerman about what drought in the Amazon might mean for the future of REDD, the United Nations mechanism designed to Reduce Emissions from Deforestation and Degradation.

GELLERMAN: From the Jennifer and Ted Stanley Studios in Somerville, Massachusetts, this is Living on Earth. I'm Bruce Gellerman.

GELLERMAN: The Amazon is by far the worldâ€™s largest rainforest. In this remote corner of the forest, high overhead in the canopy, Akaki birds warn of intruders as our footsteps crunch dead leaves on the forest floor.

The vast Amazon is more than a rainforest--it's also a giant carbon storage system. Scientists call it a carbon sink. Rainforests, like the Amazon, absorb billions of tons of carbon dioxide from the atmosphere, and sink, or store, the climate changing gas in the standing trees. And thatâ€™s where the UN plan known as REDD comes in. Advocates say REDD is the fastest, cheapest way to save the forest from chainsaws and stall global warming.

The REDD scheme is simple. Make the carbon stored in the trees worth money, so farmers and timber companies have an economic incentive not to cut them down. Brian Murray, Director of Economic Analysis at Duke Universityâ€™s Nicholas Institute for Environmental Policy Solutions, thinks REDD can work.

MURRAY: The idea here is to change the economics because in many parts of the world, itâ€™s more economic to knock the tree down than it is to leave it standing. Deforestation and degradation are one of the largest sources of greenhouse gas emissions in the world. This occurs primarily in the tropical countries. 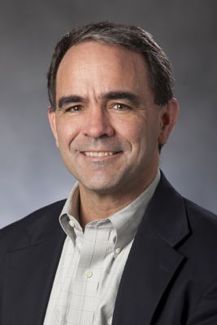 Brian Murray is Director of Economic Analysis at the Nicholas Institute for Environmental Policy Solutions at Duke University. (Duke University)

So, different policies, from international policies to national policies throughout the world, have tried to develop financing mechanisms for REDD that pay these countries to reduce their emissions below some baseline level. And the idea here is when they reduce these emissions below some baseline level, theyâ€™re helping solve the climate change problem and theyâ€™re receiving compensation for it.

GELLERMAN: Potentially, rainforest REDD could be worth a lot of green: a hundred billion dollars a year or more. Nations with rainforests would put a value on the carbon in their trees, and then countries or companies that want to offset their fossil fuel emissions could buy REDD credits.

The scheme could work as long as there's a forest to save. But we're losing the Amazon rainforest. Two devastating droughts in the past five years have turned it from a giant carbon sink to a huge source of climate changing gas. So what happens now to the REDD financial scheme as the forest dries and dies? Again, hereâ€™s Duke University professor Brian Murray:

MURRAY: Well, that is the question. Just like many investments in the world, you can think of it as a big investment, and sometimes those investments, pardon the pun, go up in flames. And the issue is, what have you done to protect yourself against that?

Under the REDD scheme to reduce carbon dioxide emissions from deforestation and degradation, polluting countries will pay rainforest nations to stop cutting down their trees. (Photo: Leo F. Freitas)

When these countries get paid for these emission reductions, theyâ€™re often translated into credits that others can use to offset their emissions. And if those credits are sold into the market, and somebody has used it and said, â€˜Iâ€™ve offset my emissions because Iâ€™ve saved these forests in the Amazon,â€™ then, you know, then a deal has been done. The problem is then if you come in later and those forests end up back in the atmosphere again because of fire, that original deal doesnâ€™t look like such a good deal. So how are you going to cover that?

Well, one way to do it would be to have something like insurance mechanisms set aside to say, â€˜Oh okay, well we issued a hundred million tons to this Amazonian country for reducing its emissions, but it turns out that 50 million tons ended up back in the atmosphere.â€™ Then you need to have some provision to, essentially, cancel out those 50 tons from the crediting mechanism.

GELLERMAN: But letâ€™s take a real-world example. In 2005, you had this drought in the Amazon, then in 2010 you have a worse drought. These are the droughts that arenâ€™t supposed to happen but once in a hundred years! Combined, they emitted more carbon dioxide into the atmosphere than the United States and China produce combined. If I was a country, or somebody paying to keep the carbon locked in that forest, Iâ€™d be out!

MURRAY: In a way, itâ€™s like many other insurable events. We have hundred year floods that occur twice in a decade as well, and it creates problems. And so, what the insurance industry does is they try to spread the risks across a lot of different areas and a lot of different types of risks, so that they can handle these big risks. If these risks turn out to be too frequent and too large, then yes, the mechanism may not be able to handle them, and another type of approach is going to be necessary to help save these forests.

GELLERMAN: Letâ€™s say you have insurance against the economic loss, but you still lose the overall carbon in the trees, which was, after all, the goal. I mean no amount of insurance is going to make up that carbon.

MURRAY: Well, one way of looking at it is: So if this is all part of credits that are trading in the market, and if your main concern is that by crediting a reduction in deforestation emissions in the Amazon, youâ€™ve allowed somebody else in the world to increase their emissions, say from a power plant. 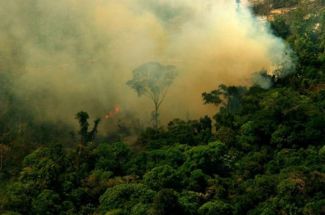 Historically, deforestation in the Amazon was attributed to slash and burn agriculture for raising soy or cattle. Increasingly, the forest is being degraded by drought, which stresses and kills trees. (Photo: Lou Gold)

Because this carbon does end up in the atmosphere regardless of whether it was paid for or not. So we have an economic situation weâ€™re trying to address through making sure that we replace those credits in the market, but we have a real potential environmental disaster at work here, which is to say, that these forests that used to be absorbing carbon dioxide are now introducing them to the atmosphere.

GELLERMAN: Under a REDD scheme, would Brazil be obligated to replace the trees that died in the drought?

MURRAY: That is an open question. The international mechanism thatâ€™s being proposed says that there must be safeguards against reversals. When you pay someone to reduce their emissions, but then those emissions go back up a few years later as a result of these influences, thatâ€™s considered a reversal. The mechanism has to find a way to deal with these reversals, or else those who have developed it, in the international community, realize that this problem could undermine the entire integrity of the system.

GELLERMAN: Brian Murray is Director of Economic Analysis at the Nicholas Institute for Environmental Policy Solutions at Duke University. Professor Murray, thanks a lot.

MURRAY: Thanks for having me, Bruce.