Few navigators have dared to travel the treacherous waters of Northern Canada that marooned Henry Hudson some 400 years ago. But as Mind Open Media’s Emily Corwin reports, a storyteller and a climate scientist have both taken on Arctic exploration as an interest and a challenge.

GELLERMAN: Four hundred years ago explorer Henry Hudson set sail from England in search of an Arctic route to the riches of Asia. It was an ill-fated journey that ended in disaster for Captain Hudson and his son - and they never did discover the fabled Northwest Passage. Even today, despite satellite maps and GPS, much of that same region in Northern Canada, remains an unexplored mystery. But still, there are those who dare to venture –and challenge the unforgiving place just as Henry Hudson did 4 centuries ago. Emily Corwin of Mind Open Media has their story.

MILLMAN: My name is Lawrence Millman, and I'm an arctic explorer, and I have an abiding interest in other arctic explorers who disappeared off the face of the earth.

CORWIN: On a modern-day expedition to the Hudson Bay, Larry Millman overheard an unusual story about the first white man to live among that region’s native Cree. The story had been passed down among the Cree for generations, and the white man was known as Firebeard.

MILLMAN: With very little research I determined that in all probability Firebeard was Henry Hudson, who was perhaps the best-recognized navigator of his day.

CORWIN: There are only a few things we know about Henry Hudson’s personal life.

MILLMAN: Here’s one of the things we know about Henry Hudson, that he had a great affection for bangles. Like jewelry - and males wore, in those days, lots of jewelry like bracelets - he liked golden wristbands, and rings. We know that and there's one source that mentions that he really enjoyed big meals.

CORWIN: Back in the early 1600s, navigators were tired of sailing down around South America, all the way across the Pacific to Asia. So a British trading company hired Henry Hudson to find a shorter route. 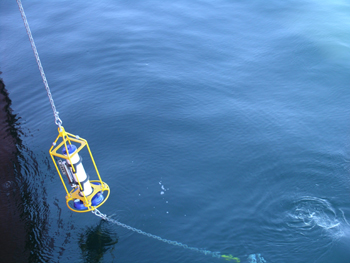 MILLMAN: Touches Iceland, gets some supplies and heads into the 'furious overfall' otherwise known as Hudson Strait. They thought, because of all these heavy currents, that it was close to the Pacific, it had to be a great ocean. No, it wasn't a great ocean, it was a long narrow strait.

CORWIN: This so-called 'furious overfall' with its counter-clockwise swirling chunks of ice was much, much colder than the guys on Hudson’s crew ever expected. Pretty soon their ship got stuck– it was mired in the ice.

MILLMAN: There's a feeling of complete and utter paralysis. You might like to go somewhere but you can’t go anywhere, you can't get your boat to move a bloody inch.

CORWIN: Hudson’s crew wanted to turn around. They said:

MILLMAN: 'As soon as we get out of this ice, Captain Hudson, we're heading home.' There was an interesting democracy among crews of that day. If the crew wanted to head home and the captain didn't, the crew got their way. He said ‘well look', he brought out a map, he showed his crew the map, 'we're a hundred miles farther West than any other known expedition. And you want to turn around.’ 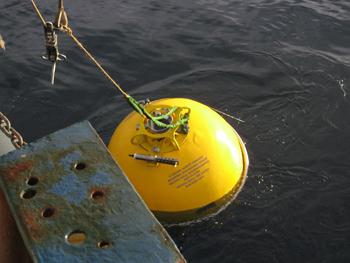 MILLMAN: Well they couldn't turn around and he was using that possibly as part of his ammunition.

[CLIP FROM FILM: We stand now on the edge of discovery. This great bay must open somewhere and yield a passage. Let us thrust westward in the common triumph of raising the Indies!]

CORWIN: That’s from the 1964 film “The Last Voyage of Henry Hudson.” Come November, it was too cold and icy to go on. Hudson and his crew would spend the winter camped on the shore of the frigid James Bay.

MILLMAN: It was just an absolute miracle that they survived the winter.

CORWIN: The crew was starving and it was freezing cold. Scurvy made their gums bleed and their teeth loose. When the ship could finally sail again, Hudson told his crew they would return to England. But there was a problem.

MILLMAN: Hudson wasn't going in the right direction for England. He was heading west, and he should have been heading north, up along the coast and out the same way they came in. And when one of the members of the crew noticed that certain individuals had cheese, and had more food than they themselves had— that was the spark that inspired the mutiny.

[CLIP FROM FILM: Arrh - now that you’re free of us master Hudson, you may sail westward for all you are worth! Hudson: Mr. Green– it is not too late. Reconsider!]

CORWIN: The crew threw Hudson and his son on a sailboat, and headed right back to England. Did Hudson go by “Firebeard” and live among the Cree, or did he freeze to death alone in the bay? We don’t know. 400 years later, another adventurous Arctic Explorer wanted her turn. The legend of Henry Hudson loomed.

STRANEO: Every time I brought up Hudson Strait everybody shook their head, it had this reputation for being a really tough place where to work. 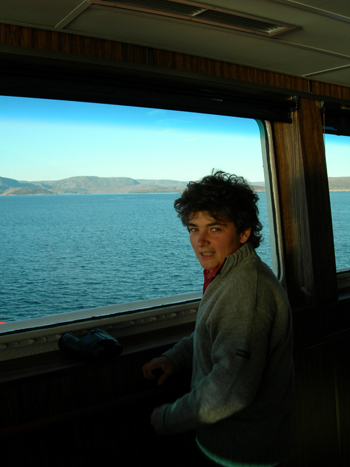 Fiamma Straneo is an ocean scientist at the Woods Hole Oceanographic Institution in Massachusetts.(Courtesy of Fiamma Straneo)

CORWIN: That’s Fiamma Straneo. She’s an ocean scientist at the Woods Hole Oceanographic Institution. Three years in a row Straneo has returned to the same place where Henry Hudson disappeared. She’s not looking for riches or spices or any of that. And none of her crews have ever threatened mutiny. See, Straneo is on a new kind of mission. She wants to understand climate change in the Arctic.

STRANEO: And so if we think of Hudson Bay and Hudson Strait as a small microcosm in the climate system, then if I can understand how they work, if I know what goes in and I know what comes out, then I can put this in a bigger model that has the entire planet, the entire atmosphere, and its going to help us predict future change.

CORWIN: As the planet heats up, moisture evaporates from warm places like the tropics. And then wind pulls that moist air over the arctic, where it rains and snows into the ocean. That fresh water is lighter than the saltwater, so it sits like a blanket on top of the entire ocean, getting in the way of the ocean’s usual temperature regulation and circulation patterns. Straneo is monitoring the water in the Hudson Strait, a bottleneck that connects the Hudson Bay to the Atlantic Ocean. This is the strait that Henry Hudson may have called the 'furious overfall' - with its massive 30-foot tides and swirling currents.

STRANEO: When you’re close to land you just see the entire landscape change. You know, your ship just goes up and down and you look and you thought oh there was an island there - well its gone. Because there are these super strong tides, the other thing that you see are these really fast currents, which switch every six hours or so and there’s so much mixing and turbulence the water literally boils.

CORWIN: Here is Straneo, in the same treacherous strait that brought about Henry Hudson’s demise 400 years ago.

STRANEO: And so if you read the old books and the old maps, Hudson Strait is actually indicated with a waterfall like the currents were so strong that ships had a really hard time navigating it.

MILLMAN: There are a couple maps that actually show Hudson bay long before Europeans ever went there. "Here Be Dragons, Here Be Monsters, or you fall off the edge at this point." 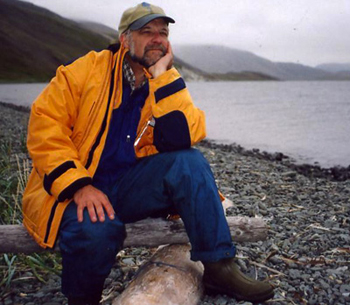 CORWIN: The legends of monsters that tormented Henry Hudson’s crew boded ill for Straneo’s expedition. Yet Straneo forged ahead. For her research, she put three chains of instruments down into the water. These chains – called moorings - are so big they have to be lowered in with a crane. What looks like a massive red fishing bobber sits at the top, while the instruments sink down, measuring water salinity, velocity, and temperature.

CORWIN: Straneo’s reward for taking on this challenge - is getting to be the first.

STRANEO: One of the reasons to work in the arctic is that it's an incredibly important place in the circulation of the ocean and the climate system and yet we know so little about it, and so you can go to so many places in the arctic and be the first person ever making measurements there, and so when you pull up this instrument that's been in the water for an hour, or for a year, and you look at these data, you think WOW, nobody's ever seen what's going on under the surface of the ocean here, you're sort of, hearing a story for the first time. 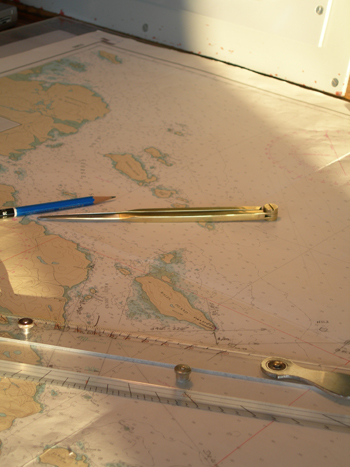 CORWIN: Kind of like when Larry Millman heard the story of Firebeard for the first time. For Millman, being in a place like the Hudson Bay gave him something else, too– a new kind of sensory experience.

MILLMAN: When you're in a place that you know, each wrong step will land you in if not trouble, deep doo doo, bear, caribou, or otherwise, then you're aware of the world around you. So I enjoy that all my senses are on the alert when I’m traveling in the Arctic.

CORWIN: Larry Millman left the arctic with a new kind of awareness and a story about Henry Hudson. Henry Hudson’s mutinous crew left Henry in the middle of the Hudson Strait. And Straneo left the Hudson Strait with the data she needed to build a predictive model of climate change in the Arctic. All of them did something that had never been done before, in a place no one – except for, perhaps, the native Cree – was meant to survive.