More Americans follow sports than science, and that enthusiasm could be put to good use. So says Allen Hershkowitz from the Natural Resources Defense Council. He tells host Steve Curwood how sports teams can encourage the public to become better environmental stewards.

CURWOOD: Now you might have noticed that the Olympic games are currently underway in London. And of course, as ever the Games spark grumbles, heartbreak, and triumph - and debate about the role of sport in national and international life. The London games are selling themselves not only as a way to revitalize a run-down part of the city, but also the greenest Olympics, with plenty of venues designed to be recycled.

But Allen Hershkowitz argues that sports can have a huge influence on environmental attitudes - whether or not it’s an Olympic year. He's a senior scientist at the Natural Resources Defense Council, and directs its sports greening project. Mr. Hershkowitz -- welcome to Living on Earth!

HERSHKOWITZ: Thank you, it's a pleasure to be here!

CURWOOD: Now, you point out that sports are enormously influential culturally, say the sports-boycott on apartheid-era South Africa, or, say, Jessie Owens, who was a spectacular success at the 1936 Olympics in Germany - but tell me, do you think they can change environmental attitudes?

HERSHKOWITZ: Well, it’s interesting. Clearly we need a cultural shift in the way we think about environmental stewardship. Congress, our government, is not leading the way on global climate disruption, on biodiversity loss. Based on past cultural shifts, it’s clear that Congress does not always lead the way - gender equality – it was not Congress that led the way on gender equality. 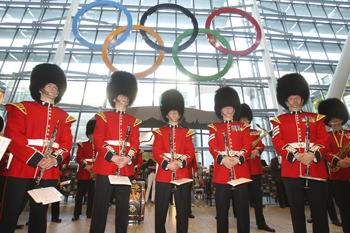 Civil rights- it was not the government that led the way, it was a cultural shift in the United States toward race relations and that forced Congress to act. So what we’re seeing is cultural shifts are led not by the government but by the people. The sports industry is enormously influential. 13 percent of Americans say they pay attention to science - 61 percent say they pay attention to sport.

CURWOOD: Which sports in particular do you think have the power to get us to change our environmental attitudes?

HERSHKOWITZ: Well, I think all sports can play a role. Obviously major league baseball, NASCAR, the National Football League, the National Basketball Association, the Major League Soccer Association, the U.S. Tennis Association, all of these sports leagues and their teams are now using some form of renewable energy - they have some recycling and composting programs.

CURWOOD: Now, what evidence do you have, Allen, that the green ideas of sports enterprises - and various officials - that their green ideas are rubbing off on sports fans themselves?

HERSHKOWITZ: Well, people don’t go to sporting events thinking about the environment. But when you show up at the U.S. Open Tennis Championships and you see a public service announcement by Billie Jean King and another one by Venus Williams and another one by the Bryant brothers talking about local food, organic food, recycling, using mass transit…do we know that this is having a transformative effect? - I don’t know.

But I tell you, the fact that these businesses, global businesses, with iconic participants, is encouraging people to think about environmentalism can only help us. And remember, outside the family, the most iconic role models are often athletes and entertainers.

CURWOOD: Well, now, a cynic would say: well, but they’re supposed to do that - it’s sort of like the 55 mile-per-hour sign there on the highway, and they’re there but who pays attention?

Given its cultural significance, it’s such an iconic industry, it’s one of the most culturally influential industries in the world - remember companies pay billions of dollars every year to have their brand name affiliated with professional sports. Coca Cola is one of the official sponsors of the Olympics and has been for 80 years. Clearly, they think that messaging affiliation with professional sports is good for branding. If it’s good for branding for Coca Cola, why is it not good for branding for environmental stewardship?

CURWOOD: Allen Hershkowitz, I’ve gotta ask you about the London Olympics - you were over there - how impressed were you, and how green are they compared to what they had hoped for?


The Cleveland Cavaliers versus the Indiana Pacers. (Photo: Flickr CC/zoonabar)

HERSHKOWITZ: The greening initiatives at the London Olympics are extraordinarily broad and diverse. And it ranges not only from reducing carbon emissions - they’re trying to reduce their carbon emissions by 50 percent - they’re trying to ensure that 20 percent of the energy is used from on-site renewable energy sources. They’re looking to reduce waste by 90 percent, they’re looking to provide 100 percent of the spectators with opportunities to arrive by mass transit or bicycling or walking. They have created the largest new park in Europe in 150 years. The housing is designed with sustainability and energy efficiency in mind.

This Olympics, really, I think, has one of the most ambitious environmental agendas of any sporting event in history. Are they achieving it all? Definitely not, but they’re saying that as well. They produced a report that critiques what they have done wrong and documents what they have done right. So, I have to give the London Olympics very high grades for their ambitions and also for their honesty in the way they are evaluating their accomplishments.

CURWOOD: Allen Hershkowitz directs the sports greening program at the Natural Resources Defense Council, thank you so much.