A team in England is taking speed to new levels. No, we’re not talking about Olympic athletes, but instead, the creators of the Bloodhound Supersonic Car. As IEEE Spectrum Radio’s Lisa Raffensperger reports, the Bloodhound is designed to go a thousand miles an hour, making it the fastest car on earth.

CURWOOD: The Olympics showcase the power, speed and skill of the world’s most elite athletes. But not too far from this year's main Olympic venue, a team of engineers is building a car that will also highlight power, skill and especially speed. It’s an automobile that will travel a thousand miles an hour. From the IEEE Spectrum Radio special “Fastest on Earth,” Lisa Raffensperger traveled to London to attend the car’s first public appearance.

RAFFENSPERGER: They rolled up in Porsches, Jaguars, and Ferraris. Middle-aged men wearing loafers and carrying backpacks piled out of cars. Antique roadsters and pristine Bentleys pulled up onto the grass to park. I, on the other hand, made my grand entrance to the London motorsports festival in slightly humbler fashion…

RAFFENSPERGER: …on the free shuttle bus. The Festival of Speed, held outside London every year, is a car lover’s dream.

FESTIVAL ANNOUNCERS: Festival of Speed radio on the way in, in association with The Telegraph, you’ll have heard my colleague Chris Druitt talking to some of the great characters from across the pond.”

RAFFENSPERGER: Vintage Indy 500 cars roared by on the racetrack. Slick Formula One racers stood on pedestals under the summer sun. A crowd began settling into the bleachers. One man poured himself hot tea from a thermos.

But the most stunning car on the fairgrounds that day wouldn’t grace the track. It won’t appear in a showroom. Only one man will ever sit behind its wheel. Tucked away in a tent off to the side was a car unlike any that’s ever been built. A car that will go four times as fast as the fastest car you can imagine. A car that will drive faster than the speed of sound.

RAFFENSPERGER: Just once in history has a car broken the sound barrier. That was in 1997. The car was the Thrust SSC
—for supersonic car—a slender black needle flanked by huge jet engines. It was built by a team of British engineers led by Richard Noble,
and its driver was Royal Air Force pilot Andy Green. In the Nevada desert, Green piloted the car to a land-speed record: 763 miles per hour, breaking the speed of sound. 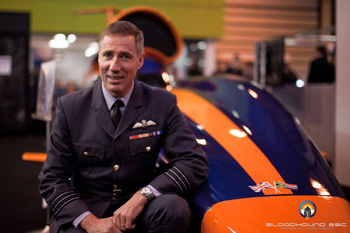 Andy Green will pilot the Bloodhound Supersonic Car.
(Courtesy of Curventa and Siemens)

RAFFENSPERGER: The shockwave knocked frames off the walls of houses dozens of miles away. Now the team is preparing to smash its own record with the
Bloodhound SSC.. The car has been in the works since 2007. And it’s currently being built in a workshop in Bristol. And when it is raced in the desert of South Africa, the Bloodhound will set a new land-speed record of 1,000 miles per hour.

For starters, there’s the rocket. Engineer Daniel Jubb has designed the world’s most powerful hybrid rocket to propel the car. It’s similar in size to the rocket powering Virgin Galactic’s SpaceShipTwo. And the “hybrid” part comes from its two components, Jubb explains.

JUBB: We use a solid fuel grain, which is very similar to the propellant in a solid propellant rocket, but it won’t burn on its own. It can only burn in the presence of a liquid oxidizer, which is stored in a separate tank. That gives you the ability to turn off the flow of oxidizer and shut the system down. So it’s the ideal candidate for use in a land-speed record car, because you have that element of controllability while retaining simplicity. 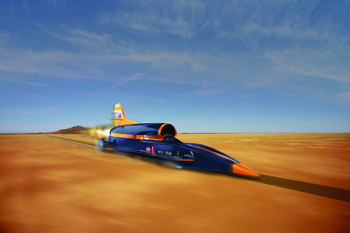 (Courtesy of Curventa and Siemens)

RAFFENSPERGER: The rocket’s built into the bottom of the car. And above it, just behind the cockpit, is the car’s other propellant: a fighter-jet engine.

JUBB: What we have with Bloodhound is a really quite elegant solution with the jet engine and the rocket. The jet engine is an EJ200, a proven well-established unit, and it’s very controllable. However, the drag from the air intake, and the size of the engine, meant that we wouldn’t get to 1,000 miles an hour simply by using two jet engines. So we need the brute force of the rocket.

RAFFENSPERGER: Though previous land-speed record cars have used rockets or jet engines, Bloodhound is the first to use both. And finally, the car relies on one additional engine—from a Formula One racer. But it doesn’t power the car. It’s needed just to pump the liquid oxidizer into the rocket, at a flow rate fast enough to fill a bathtub in three seconds. Putting all those components into one vehicle was the job of chief engineer Mark Chapman, and it came with its fair share of headaches.

CHAPMAN: The problem is, the lower altitude you go, the thicker the air becomes. Now, low aircraft do fly at twice the speed of sound. The Typhoon we got the engine from, it flies at twice the speed of sound. It cannot do that at the altitude we’re driving the car at. In fact, nothing has gone that speed at the altitude we’re going at. So we have to be very careful at how we get the flow into that engine.

RAFFENSPERGER: Wheels also do weird things at such extreme speeds.

CHAPMAN: So the way the car steers is like a conventional car: it’s got double wishbone front suspension. Andy’s only got a couple degrees of steering lock. So he’s got a rubbish turning circle, but he hopefully doesn’t need to park or anything like that.

Up to about 400 mph, these work like wheels on your car. They steer by sticking to the ground. And as Andy turns, it digs in and turns the car. Above about 400, they start to work like rudders. More and more, the aerodynamics of the wheel are what’s causing it to do the steering.

GREEN: There’s a tremendous sense of awe about enormous power and enormous quantities of almost anything. Particularly with vehicles for speed…

RAFFENSPERGER: But if you want to feel what it’s like to drive faster than the speed of sound—not just to observe it—here’s the closest I can offer. A video recording takes us back to 1997. Andy Green is settling himself into the cramped cockpit of the Thrust SSC. All you can see out the windshield is desert, with a white line stretching toward the horizon.

RAFFENSPERGER: The car responds slowly to the throttle but then starts picking up speed.

RAFFENSPERGER: Five hundred, 600. The car is fishtailing. It veers 50 feet from the line you’re driving.

RAFFENSPERGER: You enter the “measured mile,” where you will be timed. And the mile is over.

RAFFENSPERGER: Immediately you close the throttle, and all your weight plows forward.

GREEN: And that’s a huge physical change for me, from being pinned back in my seat to being thrown forward into the harness.

RAFFENSPERGER: When you’ve slowed enough, you apply the brakes.

GREEN: Then it all starts to happen in slow motion. By the time you get down to 200 miles an hour, it does actually feel so slow you could just get out and walk.

RAFFENSPERGER: And as you come to a stop, just two minutes after setting off, you’re 13 miles from where you started, and you’re the fastest thing that’s ever crossed the earth’s surface.
I’m Lisa Raffensperger.

CURWOOD: Our story on the Bloodhound car is from the I triple E-Spectrum Magazine special, “Fastest on Earth.” The publication received the 2012 National Magazine Award for general excellence.