Shell Oil to Drill in Alaska

CURWOOD: From the Jennifer and Ted Stanley Studios, this is Living on Earth. I'm Steve Curwood.

Shell Oil drilling ships are standing by at sea, waiting to sink
exploratory wells into Arctic Alaskan waters. The oil giant bought permits to drill in the Beaufort and Chukchi Sea over five years ago. Since then, Shell has faced hurdle after hurdle with regulators, lawsuits, and a federal moratorium on offshore Arctic drilling after the Deepwater Horizon disaster.

Even with their ships up in the Arctic, Shell is still struggling to get final approval to drill. Alex DeMarban is a reporter for Alaska Dispatch. He says Shell has
already reduced the number of wells they plan to drill this year.

DeMARBAN: Yeah, they cut down on the number because of problems with sea ice. It's lingering longer than usual. It's still, at this point, blocking access to their Beaufort Sea site so they still have not yet even begun to send up ships yet to the Beaufort Sea. And they're still having regulatory issues, as well. 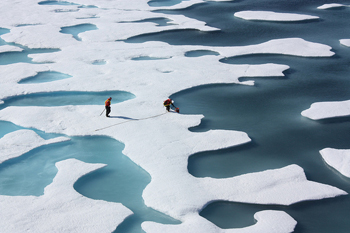 CURWOOD: So, there have been a lot of objections from environmental and Alaska native groups over oil exploration in the Beaufort and Chukchi. What do they say?

DeMARBAN: Well, they're worried, of course, largely about a spill. They believe that there's not enough resources up there to respond to it - a spill. We don't even have a deepwater port within hundreds of miles of where Shell will be drilling. There's no Coast Guard station the closest one is 900 miles away. So assistance for Shell in the event of a spill could be a long time coming. So that's the primary concern of environmental groups.

And of course, if there's a spill that could damage... could kill whales, the bowhead whale, as well as other iconic animals such as the polar bear that are already considered to be threatened because of climate change, then that could severely damage the subsistence cultures that exist on Alaska's coast that rely on primarily on the bowhead, but also on Beluga whales.

And when we say that it could destroy their culture, I don't believe that's an overstatement because their entire year is based around the effort to go whaling in the fall and spring.

CURWOOD: How much oil exploration has Shell already happened in these Alaskan waters?

DeMARBAN: There's been about 30 wells drilled and I believe Shell drilled most of them back in the 1980s and 1990s. Apparently they have a pretty good sense that they're sitting on something huge.

CURWOOD: Well, how much oil does Shell expect to get from these sites?

DeMARBAN: Well, from these particular sites, I'm not sure. But the overall Arctic potential oil is considered to be at least 25 billion barrels of oil. It is a lot. But when you consider the vast U.S. consumption, it would go rather quickly if it provided all of that U.S. consumption. . . two years or less is my understanding.

So, they need at least one billion barrels of oil to make it economically feasible...is one rule of thumb. So the economic hurdles are going to be huge because they've still got to figure out how to get the oil to market and, given that there's nothing up there, the cost for that is going to be tremendous. 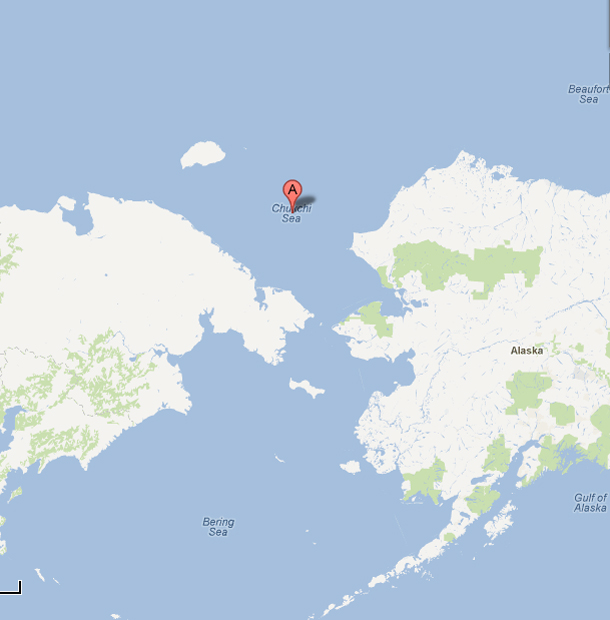 The Chukchi Sea (A) separates Alaska from Russia north of the Bering Strait.

CURWOOD: What do you mean that there's nothing up there?

DeMARBAN: Well, there's no pipeline. For example, offshore, they're going to have to build pipes under the ocean 70 miles in the case of the Chukchi to bring it onto shore in Alaska. And then they've still got many, many miles across Alaska to carry that pipeline to get to our single conduit that runs across the state.

In order to get the oil to a location from where it can be shipped, hundreds of miles of pipeline would still have to be built in a very complicated region with numerous threats including the underwater ice floes that can slash through pipes, so there's great costs and great concerns going well into the future here.

CURWOOD: Shell Oil is the first comer in this particular round of exploration in the Beaufort and Chukchi Seas. What does this mean for the future of oil and natural gas exploration in Arctic waters, in general? Anyone else looking to start drilling?

DeMARBAN: Yeah, I think some of the companies on deck are Conoco Phillips and Stat Oil. They're watching Shell closely to see what's discovered. If there's a large discovery, that's going to compel them to move more quickly. They're hoping to begin development in the next couple of years at some sites in the Beaufort and Chukchi Sea, as well. And, certainly, if Shell finds something huge, there's expected that there'll be a sort of oil rush to the Arctic.

DeMARBAN: Alex DeMarban, you've been following this story of Shell attempting to drill there in the Beaufort and Chukchi Seas there in the Arctic. How likely is it, do you think, that Shell will end up putting in these test wells before things freeze up this year?

DeMARBAN: Well, I think that there's a very good chance that they are going to get one done in the Chukchi, and they do have an opportunity to request an extension, so that may happen. There's a very good chance that that may happen. It may not be for long. The other thing is that they can also do preparatory work for next year by beginning to drill. They can't go down too deep, but they can go down a bit to prepare for next year. So they can still meet their original goal of drilling up to ten wells in two years as long as they can get enough preparatory work in this summer.

Scientists worry that drilling for oil in the arctic will disturb wildlife and add to climate change which already threatens animals like polar bears. (U.S. Fish and Wildlife Service Scott Schliebe)

CURWOOD: Alex DeMarban is a reporter for the Alaska Dispatch in Anchorage. Thank you so much, sir.

DeMARBAN: Thanks, Steve. Appreciate the time.