Marine biologist Greg Skomal dives deep into the ice cold Arctic waters to find out more about the behavior of Greenland sharks.

CURWOOD: Science research often takes place at the edge, along a frontier. For some researchers, like shark expert Greg Skomal, that edge is the very boundary between their own life and death. Producer Ari Daniel Shapiro reports on Skomal's search for one shark living in an extreme environment.

SKOMAL: There's a lot of things that drive human beings to do what they do. But for me, you know, it's that anxiety, that edge, that mix of emotions, the clashing of human logic with human heart. Like two currents smashing together. Until one wins, it's a roller coaster ride.

SHAPIRO: And there's one kind of creature that does this for Skomal that gets him on that roller coaster ride again and again.

SHAPIRO: Skomal is a biologist with the Massachusetts Division of Marine Fisheries. He's in the water with sharks every chance he gets. Case in point: the Greenland shark, or Somniosus microcephalus.

SKOMAL: The Greenland shark basically looks like a cigar - short fins, big nose. Not the most attractive shark I've really ever been in the water with. Due to the fact that this shark lives under six feet of Arctic ice for most of the year, we just don't know a lot about it. So our goal was to get up there in the Canadian Arctic and try to figure out how this animal behaves under the ice.

SHAPIRO: And why were you interested in this question kind of in the large picture?

SKOMAL: We live on a changing Earth where ice is breaking up, where global climate change is occurring. And we want to know what the implications are for the ecosystem in the Arctic region, and part of that ecosystem is the Greenland shark.

SHAPIRO: Greenland sharks are apex predators. Nothing eats them, but they eat ringed seals. And Skomal wanted to figure out how the sharks hunt down these seals. Because, from his perspective, there are two big obstacles for the sharks. First:

SKOMAL: It has a parasite that bores into its eyeball that renders it virtually blind. We think the eyeball operates more like a light sensor.

SHAPIRO: So the sharks can't see the seals very well. The second obstacle has to do with the water temperature. It's bitterly cold. The salt allows the water to plunge a few degrees below freezing without turning it to ice. 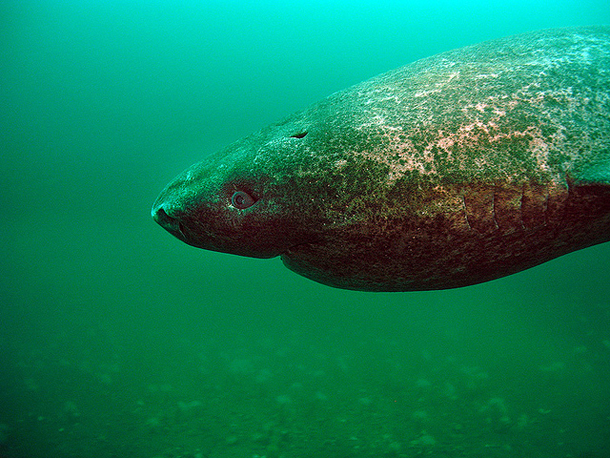 Scientists are trying to figure out how Greenland shark behave in the cold, Arctic waters. (Photo: Jeffrey Gallant, GEERG)

SKOMAL: Life in cold water, it tends to have very low metabolic rates. So these sharks reflect that - they're very sluggish, very slow.

SHAPIRO: Too slow, it seemed, to catch a fast-moving seal.

SKOMAL: This shark's taking half a minute to move its tail just from one side to the other. You know, you look at a dog, you get something, you look at even a snake - you get something - it looks at you, its tongue moves, something happens. You look at a Greenland shark and all you get is this sense of: I'm a completely lifeless individual that's gonna live my life the way I wanna live it, and I'm not betraying anything to you.

SHAPIRO: But Skomal wanted answers. He wanted to figure out whether these sharks ate only dead seals, or if they could hunt live seals. So he set out to spy on the sharks, to see if they hung out where the seals were living, in the thick ice layer.

SKOMAL: We used something called passive acoustic telemetry, which basically means you put a pinger on the shark, you let it go, and you set up listening stations around the area to find out what the shark does.

SHAPIRO: That is, where it moves underwater. To attach the pingers, he and his team dug holes in the ice, cast baited fishing lines into the water, and brought the sharks to the surface, one at a time. Which is when Skomal, wearing his scuba gear and dry suit, would descend down through the hole and into the icy water below.

SKOMAL: It's an incredibly eerie world to be in because there's no sound. You're in gin-clear water - it's like being in a giant martini. And there before me is an eight, nine or ten-foot Greenland shark. You can keep them from swimming away because they're so cold in this environment. And believe me, being in that water does slow you down as well. I was comfortable for roughly about 15 minutes. Once your body core cools down, you need to get out of the water. You're working in water that is deep so if you have buoyancy issues, you sink to the bottom, you're dead. If you can't find your ice hole, you get disoriented, you're dead. So there's always that gnawing at the back of your brain.

SHAPIRO: On numerous dives, Skomal did manage to stay focused and attach pingers to the dorsal fins of six Greenland sharks. And later, when he got the data back, he reconstructed their 3D paths. 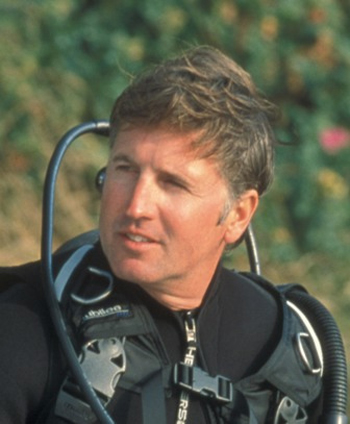 Marine biologist Greg Skomal goes to the Arctic whenever he can to find out more about Greenland sharks. (Photo: Clarita Berger)

SHAPIRO: Skomal thinks the sharks may use their big noses to follow a seal's scent trail to the surface, and their eyes to discern the bright hole in the ice ceiling where the seal would be living, and finally -

SKOMAL: These sharks have an amazing mouth. They have an ability to latch onto something, literally suck onto it, and feed on it. Unsuspecting, the seal may drown as the shark drags it under. We think that might be the mode that this shark is using. Never observed, but derived indirectly from our technology.

SHAPIRO: This research almost doubled what was known about the Greenland shark, and that pleases Skomal a great deal. But the fieldwork, the diving beneath the ice also brought him to that edge he so adores - the place where logic and emotion face off.

SKOMAL: When you reflect back on it, you say, "Wow, that was incredible!" Not only being in probably the most inhospitable environment I've ever been in, but getting to see a species that very few people on Earth have ever seen. Underwater with a live Greenland shark. That, in and of itself, just drives me forward to want to keep doing these things.

One Species at a Time