Sharks hold a special, dark corner in the English language. We’ve maligned this apex predator into all sorts of monstrous metaphors, but what do the sharks in water have in common with the sharks in speech? Living on Earth’s Ike Sriskandarajah compares the shark science with the sayings.

CURWOOD: Every year, around this time, we're reminded... to stay out of the water: 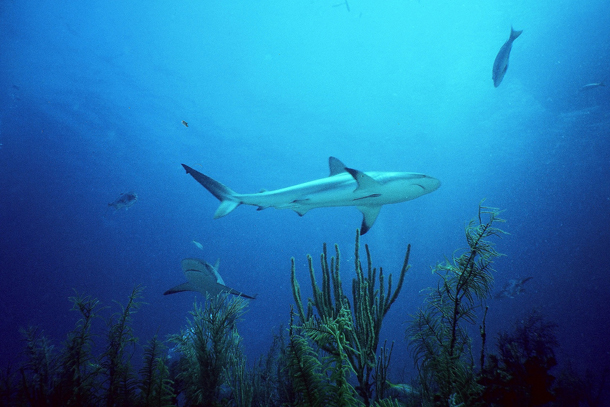 CURWOOD: For the past 25 years, the Discovery Channel has paid homage to that most fearsome of apex aquatic predators: the shark. But for centuries, sharks have captured our imagination... and our language.

Perhaps more than any other animal, we use sharks in common expressions and metaphors. Living on Earth's Ike Sriskandarajah separates the sayings from the science of sharks.

Shark Week has become something of a national holiday.

SRISKANDARAJAH: We use animals as metaphors all the time. Lambs are gentle, bees are busy and sharks... well, sharks mean a lot of things.

MCKEAN: Obviously, we wouldn't have nearly 25 years of Shark Week if they weren't so gripping and hard to tear your eyes away from. 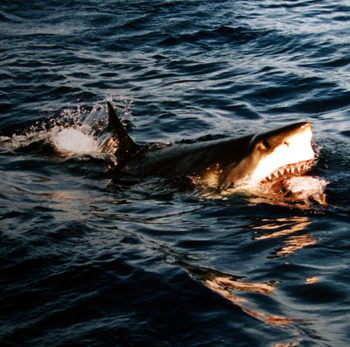 SRISKANDARAJAH: Erin McKean is here to help us understand how we use sharks in language. She's the founder of Wordnik, a large online dictionary and is a language expert.

MCKEAN: Lexicographer is the generic term.

SRISKANDARAJAH: And to tell us if our sayings have anything to do with the real life kings of the ocean, is a man who lives every week like it's shark week.

GRUBER: Yes, and I must tell you that I was on the very first one. They sent a group down to our research vessel and did the first shark week interview with us. 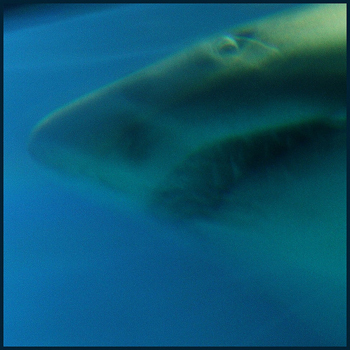 SRISKANDARAJAH: Samuel Gruber, better known as Doc, was on the cutting edge of shark research back then. He now runs the shark lab at the University of Miami. We gave a list of shark inspired phrases to our two experts. First up: "sharkskin." A shiny fabric that mimics the gray sheen reflecting off a shark, used to make suits.

SRISKANDARAJAH: A sharkskin suit became associated with a man who's dressed a little too slick to be trusted.

Sharks’ need for constant motion has drawn much comparison, but is a misconception. Many sharks can remain motionless.

MCKEAN: A low rent mobster in a sharkskin suit. Unless you're extremely odd, the fabric itself is not real sharkskin.

GRUBER: The first thing about sharkskin is it's an amazing structure. It's an armor plating of tiny little teeth.

SRISKANDARAJAH: "Dermal denticles"--- these tiny teeth let sharks swim faster and quieter. Though few people are cloaking themselves in real sharkskin, the material has been used all over the world.

GRUBER: They used to make gloves out of them. They would use the gloves as sandpaper to make fine furniture, and they also used the gloves to make billiard balls round.

SRISKANDARAJAH: Which brings us to our next phrases.

SRISKANDARAJAH: The pool shark, the loan shark, and the card shark.

MOVIE CLIP ROUNDERS: The game in question is no limit Texas hold'em, the stakes attract rich flounders, and they in turn attract the sharks.

SRISKANDARAJAH: But while the human sharks exploit power, Doc Gruber says, the real sharks use time.

The shark feeding frenzy has been used to describe the financial industry.

GRUBER: We call them the lords of time, because of their ancient evolutionary history and their survival for half a billion years, so they're playing the game in a way that most things can't because most things aren't that highly evolved.

SRISKANDARAJAH: A group of sharks is called a shiver. And if there's "blood in the water," that shiver might go into what's known as a "feeding frenzy."

TV: About 50 sharks were counted in this feeding frenzy.

SRISKANDARAJAH: This turbulent behavior, according to Erin McKean, has become a metaphor.

MCKEAN: And these metaphors, ff they're really successful, they take on lives of their own.

BANKER ON TV: Wow, it's like one of those Jacques Cousteau films where the sharks are in a feeding frenzy, except this time it's a bunch of bankers.

BANKER ON TV: There's allegedly a feeding frenzy that could happen on Wall Street.

GRUBER: If you look at the so-called feeding frenzy, if you analyze that, you find that there's a lovely ballet and that the sharks are not frenzied at all. They're very careful in where their mouths go so that they don't bite one another. They're very cautious when they do this apparent frenzy.

“Jump the shark” means running out of ideas and resorting to cheap gimmicks.

SRISKANDARAJAH: And our final phrase doesn't have anything to do with money or power. "Jump the shark." an expression originally derived from a landmark episode of the popular 70s TV show, Happy Days.

MCKEAN: There was this scene in Happy Days where Fonzie water skis and jumps over a shark to prove that he really is the coolest person in the universe.

MCKEAN: But of course, it was so contrived. So jumping the shark means to do something in a story that is so over the top that everything after it just seems dumb.

SRISKANDARAJAH: So the obvious question for shark expert Doc Sam Gruber: In this preposterous storyline, how high would the Fonz have to jump... if the shark jumped, too?

GRUBER: I love that question because I always say to people, 'alright, this is your chance to ask the shark doc about sharks. For instance, how high can a shark jump? Some sharks just can't jump but there are sharks that can jump 25, 30, 35 feet out of the water.

SRISKANDARAJAH: That could be a pretty risky stunt if it all lined up.

GRUBER: It would have to line up in a really weird way.

SRISKANDARAJAH: The Fonz made it but in doing so, it gave us another phrase that in some way shades sharks as big fish who've run out of good ideas. On top of being power-hungry, out of control, cheats.

GRUBER: You know, we love our monsters, we love to hate our monsters, so we make sharks into monsters for humans that emulate this nasty creature. It's just a myth but it works.

SRISKANDARAJAH: Maybe one reason why it works, is because maybe we're not so different after all. For Living on Earth, I'm Ike Sriskandarajah.