They're beautiful, delicious, all sizes, shapes and colors, and celebrated in the book "The Heirloom Tomato: From Garden to Table." Living on Earth's Helen Palmer visits the garden of author Amy Goldman who not only grows heirloom tomatoes but is passionate about saving their seeds.

CURWOOD: And when it comes to heirloom plants, perhaps none are as diverse and tasty as tomatoes, although when we asked Living on Earth's Helen Palmer to check into heirloom tomatoes, as an Englishwoman she prefers to say:
PALMER: Tom-ah-to.
CURWOOD: Well, anyway, Amy Goldman wrote a gloriously illustrated book about tomatoes called "The Heirloom Tomato." And a few summers ago we sent Helen off for the fields of Rhinebeck, New York where Amy Goldman writes and tends her garden. Not only does Amy grow heirloom tomatoes, she's also a seed saver extraordinaire, fulfilling the mission of what we just heard Janisse Ray talking about. 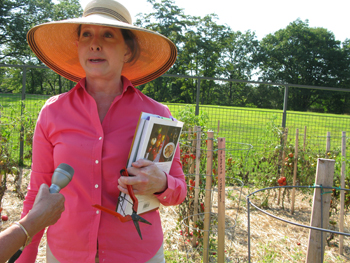 GOLDMAN: Tomatoes and I go way back. I started growing them when I was seventeen years old, and ever since then I've had my hands in the soil.

PALMER: Amy Goldman grows peaches and blueberries, melons and squash. She keeps ducks and chickens, and, of course, she grows tomatoes. Today she wears a long sleeved shirt and broad brimmed straw hat against the brilliant late summer sun as she shows off her crops.

[SOUND OF WALKING ON STRAW]

GOLDMAN: We're in the middle of Amy's Folly. This is an acre filled with 500 tomato plants, 250 different sorts, two of each. 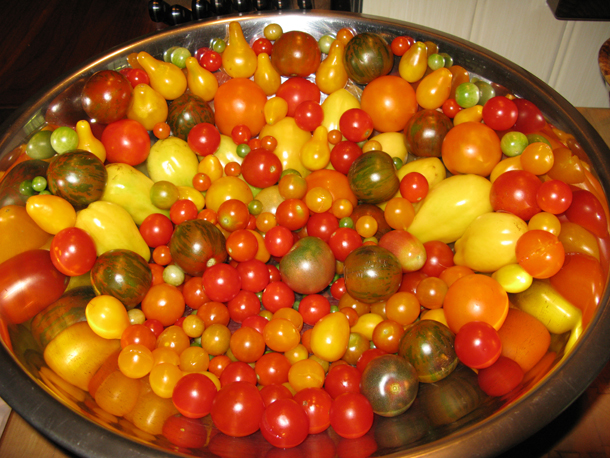 PALMER: And unlike the tomato plants most of us buy from the supermarket, those four-packs of reliable hybrid varieties like Early Girl or Big Boy or Sweet 100, Goldman grows heirloom tomatoes.

GOLDMAN: The term "heirloom" - it means a tomato of value, capable of reproducing itself true to type, from seed that can be handed down to next generation.

PALMER: My backyard's a thicket of tomato plants. Goldman's heirlooms are arranged in neat rows. The six-foot tall cages are all clearly labeled, widely spaced, surrounded by straw.

GOLDMAN: The biggest mistake gardeners make is crowding them. I plant my tomatoes five feet apart in the rows and seven feet between rows. They need - first of all, they need full sun. They need air circulation and that reduces the incidence of disease, and allows the plants enough room to grow and prosper.

PALMER: Goldman heads down the row to a tomato plant with tentacle-like branches sprawling out over the straw.

GOLDMAN: In this most horrible of tomato years this plant is going gangbusters. I mean it's moving across the garden at an alarming rate and, in fact, probably spreading out about eight to ten feet in diameter.

PALMER: This tomato's leaves are bright green, and it's laden with sprays of tiny currant-like fruits.

GOLDMAN: Alberto Shatters. It's a very primitive plant. It shatters, it drops its fruit when the fruit is ripe. The tomato quality is superb. In fact, it's high in acid, high in sugar, very crunchy, and just wonderful. It's probably, if not the smallest, one of the smallest tomatoes in the world, weighing in at about a gram. You know, you can't even weigh it in ounces. It's about a gram and the size of a garden pea.

PALMER: They taste good and you think they're...?

GOLDMAN: Well, try it for yourself.

PALMER: I guess I'll have to. Let's see if I can find a ripe one.

GOLDMAN: Just give it a shake and they'll fall off. 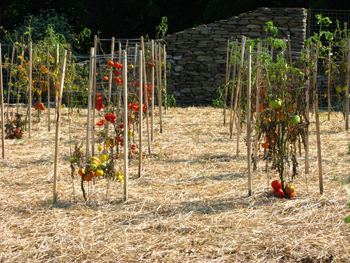 PALMER: These pea-sized tomatoes pack a powerful flavor punch, but that's not their only value for Goldman.

GOLDMAN: Not only are they flavorful and historic and beautiful garden plants, but it's been found that plants' wild relatives contain genes that, bred into modern tomatoes, can confer disease resistance and other fine traits.

PALMER: That's one of the important lessons Goldman wants her heirloom tomato book to teach. She says the earliest wild tomatoes from South America's coastal highlands were small ones like these Alberto Shatters. The plant was domesticated in Mexico and gradually bred and selected to create all the varieties we know today. Goldman points to a huge plant in the next row, bending with the weight of bunches of egg-shaped tomatoes.

GOLDMAN: Now, I've got a tomato right down here called King Humbert, or Re Umberto. It's the forerunner of the San Marzano tomato, which is arguably the most important industrial tomato of the twentieth century.

PALMER: Let's go look at it.

GOLDMAN: There's Re Umberto genes in every one of the plum tomatoes we know today. This was named in honor of Umberto I, King of Italy about 1878.

PALMER: One thing I'm noticing about it as I look at it is, it seems to be suffering less from the blight and the browning leaves than the others, and it's very, very heavily cropping. There are lots and lots and lots of tomatoes on it.

PALMER: Those generations of Italians - like peasant farmers across the globe - recognized the value of this crop, so saved some of the seeds to plant the next year. They passed them on to their children - and their grandchildren - that's the paradigm Goldman wants the rest of us to follow. Under many of her plants lie abandoned tomatoes, apparently rotting.

GOLMAN: I couldn't possibly eat all of the varieties that I grow and I joke I'm running a private CSA for my friends and family. But I'm a seed saver and advocate for biodiversity and those very ripe tomatoes, are destined for seed saving. That's next year's crop sitting there.

PALMER: Goldman's a board member of The Seed Savers Exchange, an Iowa based non-profit that's gathered over 25,000 varieties of heirloom vegetables in the last thirty-three years.

GOLDMAN: The mission is to stop the extinction of our food crops. We have developed a network of people who are dedicated to collecting, conserving and sharing heirloom seeds and plants, while educating the general public about the virtues of genetic and cultural diversity.

PALMER: Goldman wants to spread this knowledge. She says one to two percent of heirloom varieties disappear every year as hybrids take over, and we might need that genetic diversity for our food crops in the future. Her book also traces the history of some 200 luscious tomatoes. It includes taste tests and recipes, and celebrates their evocative names.

GOLDMAN: There's the Radiator Charlie's Mortgage Lifter, there's the Nebraska wedding tomato. You know, the heirloom tomato is the people's tomato. It's of, by and for the people. You know there's a tomato called "My Owna" because it's my own.

PALMER: And there's Black Prince, White Beauty, Silvery Fir Tree, Green Doctors, Plum Lemon, Purple Calabash, Sun and Snow. All shapes for all uses - cup-shaped ones perfect for stuffing, tiny cherries to pop like candy, mammoth meaty beefsteaks for sandwiches - and all sizes and all colors.

GOLDMAN: This tomato over here is the yellow peach tomato.

PALMER: It's not shiny.

GOLDMAN: It's not at all shiny - in fact, it's fuzzy like a peach. The yellow peach tomato. This is strictly garden to table - this is a rare treat that can only be grown by the home gardener. They're so fragile, but so wonderful. And I make a wonderful galette with the peach tomato and white peaches.

PALMER: So that's a kind of pie?

GOLDMAN: It's a kind of pie.

PALMER: Which goes to remind us that the chief joy of "to-mah-toes" - or "to-may-toes" - however you pronounce them - is to eat them. And though we nibbled our way up and down the rows, it's lunchtime.

[STARTING UP AN ENGINE]

PALMER: Goldman starts up the little garden cart she uses round the farm, to take us from the tomato field back to the farmhouse.

PALMER: The smell of garlic and basil wafts out through the open kitchen door. Inside a dozen bronze casts of huge, perfect tomatoes and squash line the kitchen counter. A restaurant-size fridge and freezer hum and on the table are baskets of multicolored tomatoes.

GOLDMAN: We're making Spanish tomato bread. We toasted the bread with a little brush of olive oil - then scraped some garlic on it -- and what could be simpler? Put a little bit of tomato on top, maybe some salt, basil and you've got a treat that you'll live for all year. There's nothing in the world like a homegrown tomato. And heirlooms - my 35 years of experience as a grower, plus considerable book learning, have taught me that heirloom tomatoes ripened on the vine in full sun are the most delicious tomatoes of all.

Amy Goldman’s book, The Heirloom Tomato: From Garden to Table.

PALMER: And the tomatoes Goldman offered, and we ate, were indeed delicious. Goldman sent me home with a huge basket of assorted heirlooms, and I saved lots of the seeds for next year. For Living on Earth, I'm Helen Palmer.


Amy Goldman's recipe for galette of white peaches and tomatoes