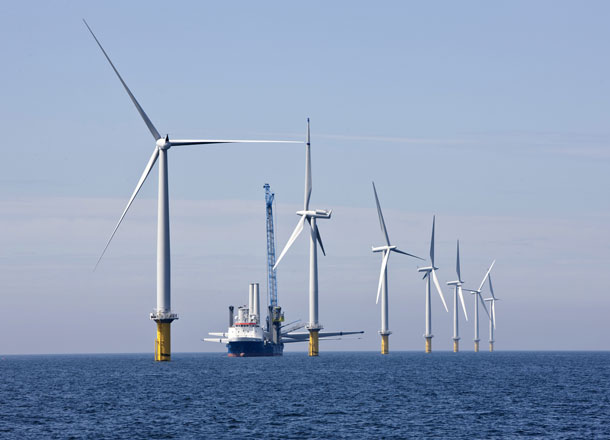 Wind turbines like these are proposed for the Cape Wind project in Massachusetts. (Siemens)

The Massachusetts fishing port of New Bedford was the heart of the whaling industry in the 19th century, and called "the city that lit the world". That industry has gone, and so has much of New Bedford's prosperity. But city managers see a new energy future, thanks to energy efficiency, renewables and offshore wind. Naomi Arenberg reports.

CURWOOD: It’s Living on Earth, I'm Steve Curwood. In Hermann Melville's classic tale of a whale, the narrator – called Ishmael – boards a schooner in the port at the heart of the whaling industry, New Bedford, Massachusetts. New Bedford was "the city that lit the world," back when whale oil was the chief fuel for lamps. Those days – and most of the whales – are long gone, but New Bedford has ambitions for a new and more sustainable energy future, as reporter Naomi Arenberg discovered on a recent visit.

ARENBERG: If you walk up the hill from the Port of New Bedford, through the cobblestoned streets of the downtown area, you’ll see some of the same buildings that Herman Melville described in his 19th century novels, but there’s a lot of 21st century, “green” change in New Bedford as well, as city officials are developing a model for environmental responsibility that they say could be copied all over the U.S.

MITCHELL: When I took office in January of this year, I thought it was important to set a tone about conservation and sustainability, and one way to do that was to continue the retrofit program that has been started by the previous administration.

MITCHELL: This is all with an effort, really, to save folks in the city money on energy, and we have a very needy population here. We have about 20 percent of our population, unfortunately, lives under the poverty line, and so every nickel for them counts.

ARENBERG: Poverty is key to the city’s environmental initiatives. The wealthy whaling captains and cotton mill owners -- the ones who built imposing homes and large, public structures -- they’re gone. Over the last half-century, the city’s population has shrunk by about a quarter, and unemployment has remained high. A new, city wide program aims to lower energy costs, create jobs, reduce carbon emissions, and help build community. Ken Ramos is the Outreach Coordinator for New Bedford Energy Now.

RAMOS: It’s really about all the people that I knew, just being able to call them up and for them to know me, and could trust me, that if I said “Free audits,” ya’ know, they would believe me.

ARENBERG: Ramos is known as a community organizer and electrician. Now he’s reaching out to all residents, both owners and renters, through numerous community organizations and schools, to make sure that everyone knows about energy audits, cost-free, through the state’s, Mass Save program. Adrienne Wilkins is Ken’s assistant.

WILKINS: There is no movement without our community’s involvement. And knowing someone for 30, 40, 50, 60 (How old are you Ken, 22??) 70 years is it’s so important because without that people are a little hesitant. You know, they want to know who you are, where you’re from. There is no outreach without the relationship to the community. 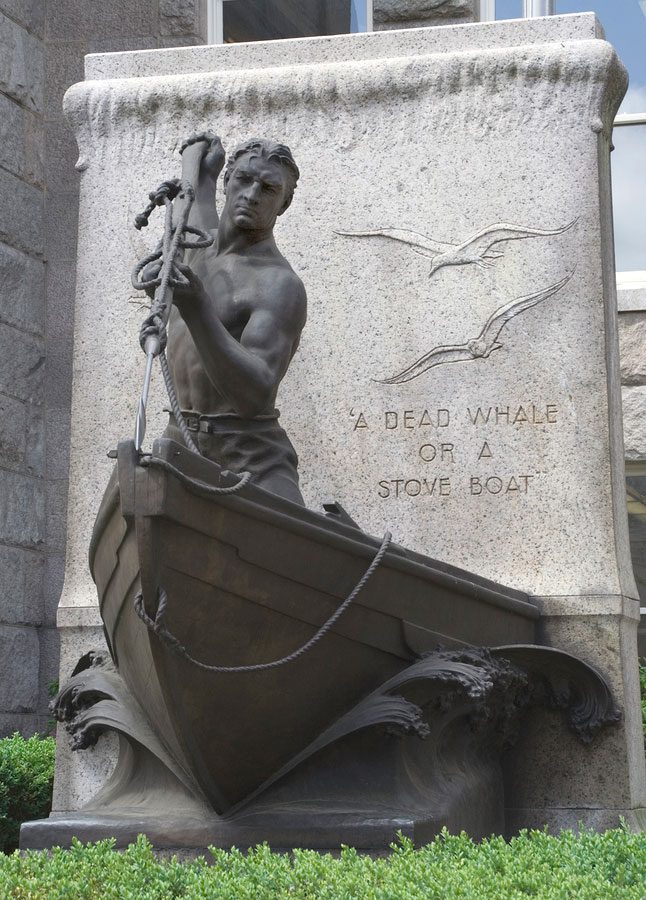 ARENBERG: Mass Save offers every household $2,000 worth of inspectional services and improvements – air-sealing the home, insulating the hot water heater and attic, and replacing incandescent lamps with compact fluorescent bulbs. And local 16 - 24 year olds, who've dropped out of school, are being trained to do the work.

WILLIAMS: OK, alright. Just gimme a… have a seat.

WILLIAMS: We have construction training. We have weatherization training. Several years ago YouthBuilds across the country, and particularly here in New Bedford, we’re experiencing funding losses and secondly our labor market is not really that strong for young people, so we’re trying to figure out ways we could increase job opportunities for graduates of the YouthBuild program. And at that time, “green” was on a new wave… so we decided to do weatherization as a service in YouthBuild.

ARENBERG: Her graduates earn fifteen dollars an hour as contractors for Mass Save, high wages for this region. But these days, business is down, and the program is running in the red. That’s unfortunate in a city with over 75-percent youth unemployment, and YouthBuild is likely to cut this program. But Ken Ramos, of New Bedford Energy Now, is upbeat. He sees a bright spot in the city’s solar outreach efforts, with current technology as an important tool.

RAMOS: Oh, we use Google Earth all the time. Our contractors use Google to go around and identify potential sites for solar. We look at housing placements. We look at the best houses, and we’ll actually identify those homes and go knock on a door of people and say, “We’ve been looking at your home on Google, excuse us. You have a perfect roof. You’re in a perfect position. We would like to you to consider solar.”

ARENBERG: And solar installation can be free for New Bedford residents. It works this way – the city partners with a privately-owned, national company, Real Goods Solar, which installs the arrays, at no cost, on any roof with clear, southern exposure. Real Goods owns the energy produced, and the solar array, for 20 years while the resident buys energy from Real Goods at a fixed price, below the average rate. Then, after two decades, the solar installation will belong to the building owner.

So far, only three homeowners have gone solar with this program, but two more installations are pending, and residents are signing up for solar evaluations. Public housing is going green, too. After retrofitting all of its 516 buildings, the housing authority outfitted 24 with photovoltaic cells last year. And the city's municipal buildings are becoming energy efficient as well, thanks to Scott Durkee, the city’s energy director, who was recovering from a cold when I met him. During his first few years in town, his office accomplished a lot, but there were problems.

DURKEE: When it came to the solar and really expanding these programs, because I was an outsider, a lot of roadblocks. When Ron took me under his wing, these doors have now opened and now you see the solar program really move forward.

LABELLE: My electric bill in the city is roughly four and a half million dollars. When I say the waste water collection system, that’s a treatment plant and it’s also pumping stations, so it’s a large mechanical operation. We have over 33 pumping stations citywide. So I became familiar with Scott Durkee and his program, and we started looking at solar. This building that we’re in right now, on a sunny day, our meters are turning backwards ‘cuz we produce more energy than we use… so we’re making money on this. It’s not a bad deal.

ARENBERG: Back at the harbor, some of the fleet of 300 fishing boats are preparing to go to sea. Within a couple of months, they’ll be plugging into electric stations at the pier, rather than running their dirty diesel engines to cool the catch or heat the cabin. And the harbor is set for a new green industry, as the nation’s first staging ground for wind farms, a project just approved by the E-P-A. Ron Labelle again.

DURKEE: It’s not just Cape Wind. New Bedford now will be the deployment of any offshore wind development in the Northeast. It’s one of the greatest economic benefits for the city in probably the last 50 years. And it’s truly exciting. You’ve got the foundation of the short sea shipping with the potential of the future of this country with wind, and we’re at the heart of it.

ARENBERG: And Scott Durkee says this is just part and parcel of New Bedford’s focus on new energy.

DURKEE: The goal was to tie what we did with the history and pride of this city, and the cultural pride in this location is unbelievable. They lit the world. At one point they were the first energy capital of the world. That’s huge! And what we said is, in the past we lit the world. Going forward, we’re gonna sustain it. We’re gonna teach how to do the right things. We’re not gonna generate to light the world ever again. Now let’s show ’em how to do it right, which is what we’re all doing together, trying to build that model that you can hand off – that incorporates everything.

ARENBERG: If New Bedford can once again provide a guiding light, then perhaps other communities will follow into a green energy future. For Living on Earth, I'm Naomi Arenberg in New Bedford, Massachusetts.