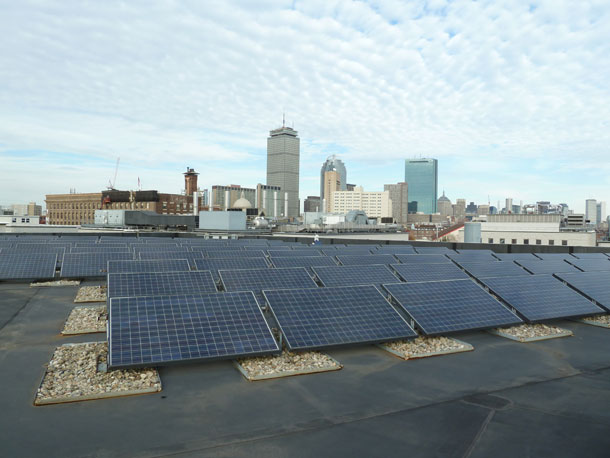 Colleges and universities across the country are investing in building efficiency and renewable energy to save money and the environment. Living on Earth’s Bobby Bascomb reports from Boston’s Northeastern University that small changes can add up to big savings.

CURWOOD: Northeastern University in Boston is the greenest college in America. 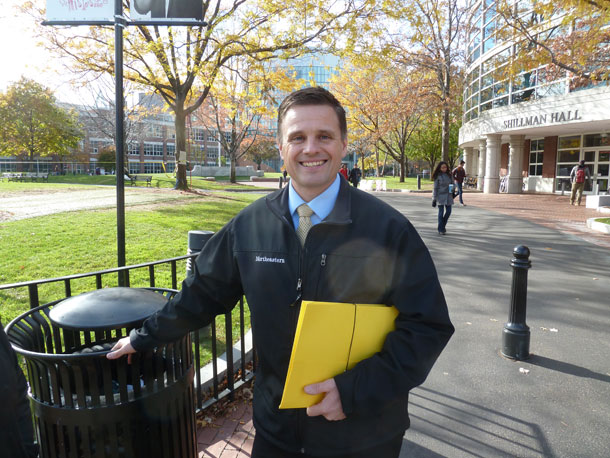 Living On Earth’s Bobby Bascomb took a visit to the Northeastern campus and has this story of how they have been able to score with efficiency.

BASCOMB: Northeastern University sits right in downtown Boston between Symphony Hall and the Museum of Fine Arts. I met Joe Ranahan, the energy manager for the university, next to the Ruggles subway stop right outside Shillman Hall. He greeted me on a wide green lawn, but it didn't always look this way.

RANAHAN: There used to be a highway that went through where the Ruggles station is. Now it’s a pretty open and green space where before it was a dirt parking lot and thousands and thousands of cars. 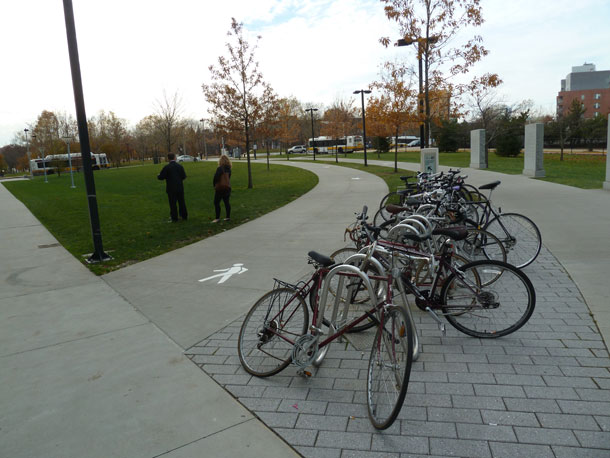 A green lawn and bike racks now occupy what was once a massive parking lot at Northeastern University. (Photo: Steve Curwood)

BASCOMB: Instead of paving the parking lot and building expensive garages the University planted grass and focused their development on public transportation. The school is now within walking distance of several bus routes, 5 subway stops, and is part of a metro bike share program.

RANAHAN: The carbon footprint has been reduced by a tremendous amount.

BASCOMB: And Northeastern says it’s on track to reach its goal to reduce their carbon pollution 80 percent by 2050. Joe led me on a walking tour of the campus to show off the work they’ve done so far. 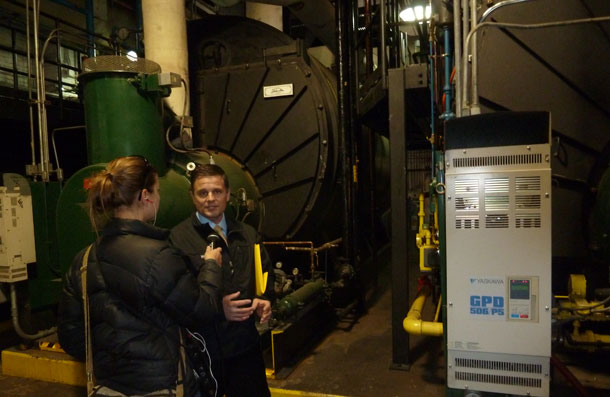 RANAHAN: We’re close to our steam plant, it’s a big energy feature on our campus. We feed steam through the ground to about 70% of our buildings. We use steam on campus to heat during the winter. We use it all year round to heat water for kitchens, for student dormitories. It’s an extremely clean plant and we’re actually very proud of it.

BASCOMB: Can we go see it now?

RANAHAN: Yes, we can.

RANAHAN: It is! It’s actually good that it’s hot in here. It’s more efficient to make steam using hot air as a combustion air than it is to use cold air. You have to heat the air up to combustion temperature and if it’s already warm you have a more efficient process.

BASCOMB: So, what are we seeing here? These are some big machines!

RANAHAN: Yes, we have 6 boilers in our plant. The reason we wanted to start making our own steam was because the steam utility would send us steam but we would take the condensate, which is the water left after the useful work is taken out of the steam. We would have to throw that condensate down the drain. 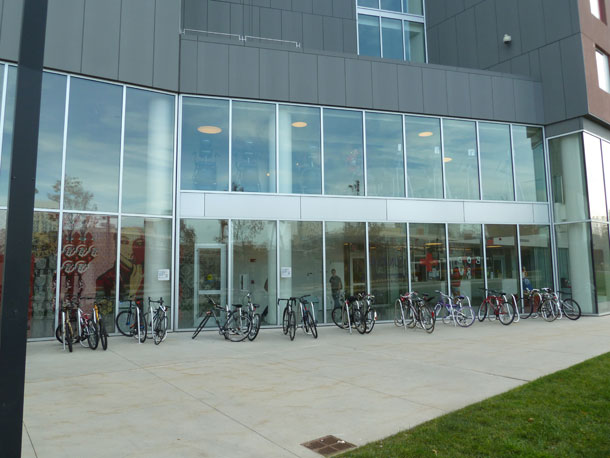 BASCOMB: Joe says these changes are saving the university several million dollars a year over what they were paying to buy steam. They are systematically looking at all the buildings to see if there are opportunities for more efficiency.

RANAHAN: One thing I hate is to see a window open in the winter because someone has a broken thermostat and the heat is stuck on.

BASCOMB: Or conversely we've all probably been in an office somewhere in the summertime where you wish you had a sweater.

RANAHAN: Right, right, and I mean, there's no need for that.

BASCOMB: Since 2005, building energy consumption on Northeastern University campus has fallen by roughly 21% but Ranahan says they’re not done yet. There’s a continual energy audit for each of the roughly 70 buildings on campus.

RANAHAN: It's sort of like painting the Brooklyn Bridge, where by the time we get to the last one it'll be time to start the first one again.

RANAHAN: So, this is the front vestibule of International Village and the feature that we're looking at in this space is the daylight harvesting. There’s large glass windows, which let in plenty of light when the sun is out. So, there are sensors on the roof that sense that light and when it's bright enough in this space it turns all the lights off automatically. 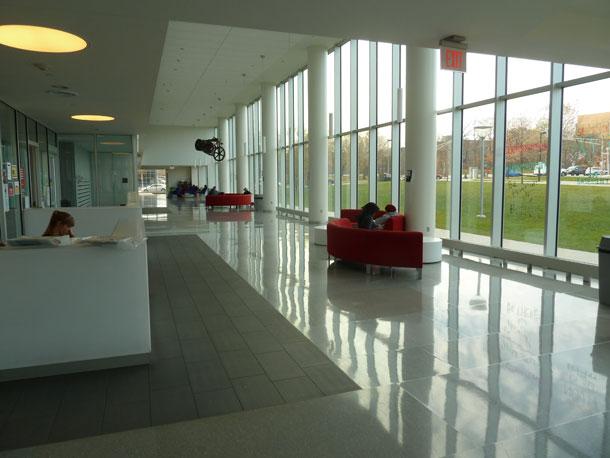 BASCOMB: So, where are we off to next?

RANAHAN: I think we’ll head up to the green roof, which is the next floor up.

[SOUNDS OF WALKING UP THE STAIRS]

RANAHAN: This is the first building that we decided to look at these… these are motion controlled stairwell lights. What these do is they dim the lights down to the code safety level but when someone comes walking up the stairs they'll turn on to full brightness so that they can see. It makes sense; why waste the power if nobody’s using it? But we still maintain the safety code. 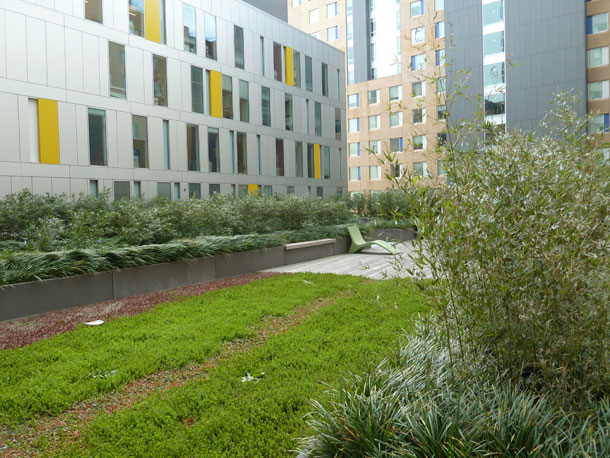 Vegetation on the roof reduces water run off during storms. (Photo: Steve Curwood)

BASCOMB: We leave the hallway and enter a gym with runners working out on a treadmill. Large glass doors open up to the roof of the cafeteria. But this roof looks more like a park. It has vegetated areas that absorb water run-off and bamboo plantings to provide shade in the summer.

RANAHAN: It's a beautiful place to sit.

BASCOMB: So was there a reason to put this in other than aesthetics? 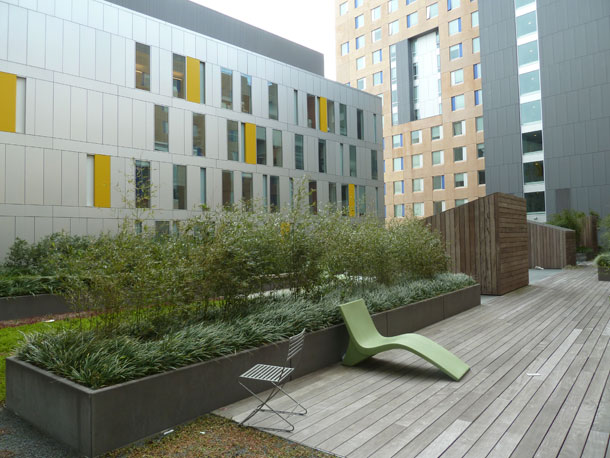 RANAHAN: Well, it does act as insulation on the roof below. In addition to that we have natural lighting for the cafeterias. If you look to my right, you’ll see two… what look like sheds. They're actually skylights which light the service area downstairs.

BASCOMB: Even the elevators here got an environmental upgrade.

BASCOMB: So, the University worked with the utility, Nstar to install LED lights in the elevators. By replacing incandescents with LEDs Northeastern saves roughly 41,000 kilowatt hours a year and roughly $5,000. 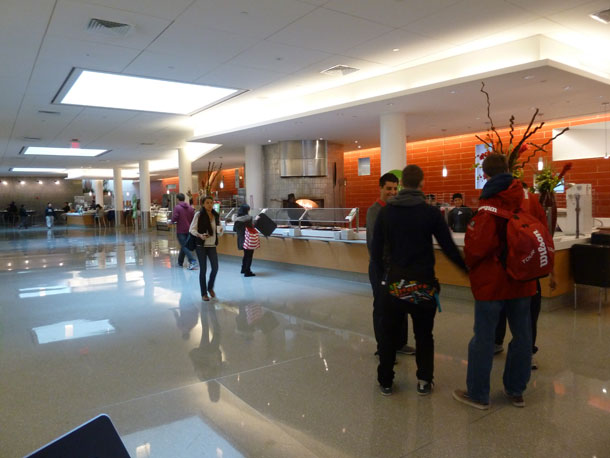 BASCOMB: It’s close to lunchtime and Joe Ranahan is eager to show the cafeteria in International Village. It’s bright with lots of natural light. It offers organic and vegan options and sources the food from local farms as much as possible. They compost six to 700 tons of food waste each year and send it back to farms for fertilizer.

RANAHAN: This cafeteria has the distinction of being the first Green Restaurant Association's green rated cafeteria that's in a LEED gold-rated building. It sounds like you're trying to shoe horn yourself into an award but it's actually a nice award to have.

BASCOMB: It’s a long climb to the top of the Curry student center where 90 solar panels were installed back in 1994 as an experiment. They still produce power but the math doesn’t make sense on a large scale.

BASCOMB: Just to power this one building?

RANAHAN: Just to power this one building. In a space-constrained area like an urban school we don’t have the space to put a large utility-sized array onto campus.

BASCOMB: Ranahan says efficiency is the way to go.

RANAHAN: The way that we look at it, you could generate clean power but then use it inefficiently or you could use less power through more efficient means. Either way the net effect is that you are creating less emissions.

BASCOMB: Northeastern has a relatively small endowment to make upgrades to the university, so they’ve made the conscious choice to save money by going green. In the last five years the school has reduced its power use by nearly 10.7 million kilowatt hours annually, saving the school nearly $1.3 million a year. Sam Solomon is the Northeastern University treasurer.

SOLOMON: Well I know that our overall utility cost has been able to remain stable or go down over recent years, even though obviously the overall campus has gotten larger and the overall footprint and square footage has gotten bigger. So, whether you can tie it to the new windows or to other energy saving features, we're obviously doing something right. 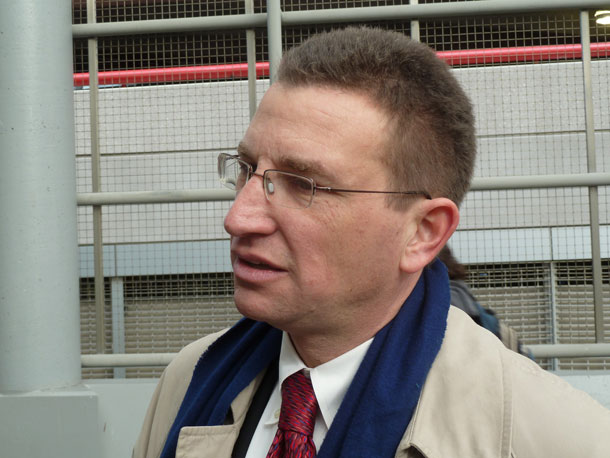 Sam Solomon is the treasurer and director of finance of Northeastern University. (Photo: Steve Curwood)

BASCOMB: Northeastern expects to be around for a long time so they feel they can afford to wait for dividends from energy efficiency investments.

SOLOMON: In the long run we look at any project we do on a cost-benefit analysis and anything with a reasonable payback period it's worth making the investment, even if it takes a couple years to get the money back.

BASCOMB: Northeastern is not alone when it comes to investing in sustainability.

THOMASHOW: I think we’re in the early days of a spectacular trend.

BASCOMB: Mitchell Thomashow is president emeritus of Unity College in Maine and a consultant to colleges and universities on sustainability issues.

THOMASHOW: If you look at all the sustainability initiatives that are taking place now in colleges and universities, it’s absolutely mind-boggling compared to what we were seeing, let’s say, at the end of the 1990s or early 2000s.

BASCOMB: Thomashow says colleges and universities across the country are experimenting with a wide range of innovations that work for them. In congested Boston, solar panels don’t make sense for Northeastern but in wide open and sunny Arizona that math works out differently.

THOMASHOW: Visit Arizona State University and you’ll see solar panels on the football stadium, you’ll see them on the parking lots. There are schools that are focusing on wind. The University of Minnesota put a whole bunch of windmills in. And then there are small colleges. Unity College, where I was president, has a tremendous focus on sustainability. We built the first LEED platinum president’s residence in the country. So we can go on and on and on. The list is just enormous.

BASCOMB: More than 700 colleges and universities in the US have signed pledges to reach carbon neutrality. They serve nearly 40 percent of the students nationally and Thomashow says these institutions are setting a good example for the students they educate.

THOMASHOW: When the campus models sustainability initiatives it sends a terrific message to the students; it says yes, life can be lived this way. You can think about this for your home or whatever business you’re going to work for.

BASCOMB: Back at Northeastern University, Joe Ranahan says he takes a lot of satisfaction in the work he and his colleagues are doing here, especially since Ranahan is himself a graduate of Northeastern.

BASCOMB: I should think too you must feel pretty good going to bed at night knowing you're saving energy and saving your alma mater all this money.

RANAHAN: I do. I drive my son crazy at home because I preach the same thing at home. I mean, it's really ingrained in me. It doesn't make any sense to waste resources when you don't need to. That's what it all comes down to, it’s whether you want to waste something or save it for the next generation, and I prefer not to waste it.

BASCOMB: Joe Ranahan, teaching his son how to conserve energy at home and putting the lessons into practice as energy manager at Northeastern University in Boston. For Living on Earth, I'm Bobby Bascomb.