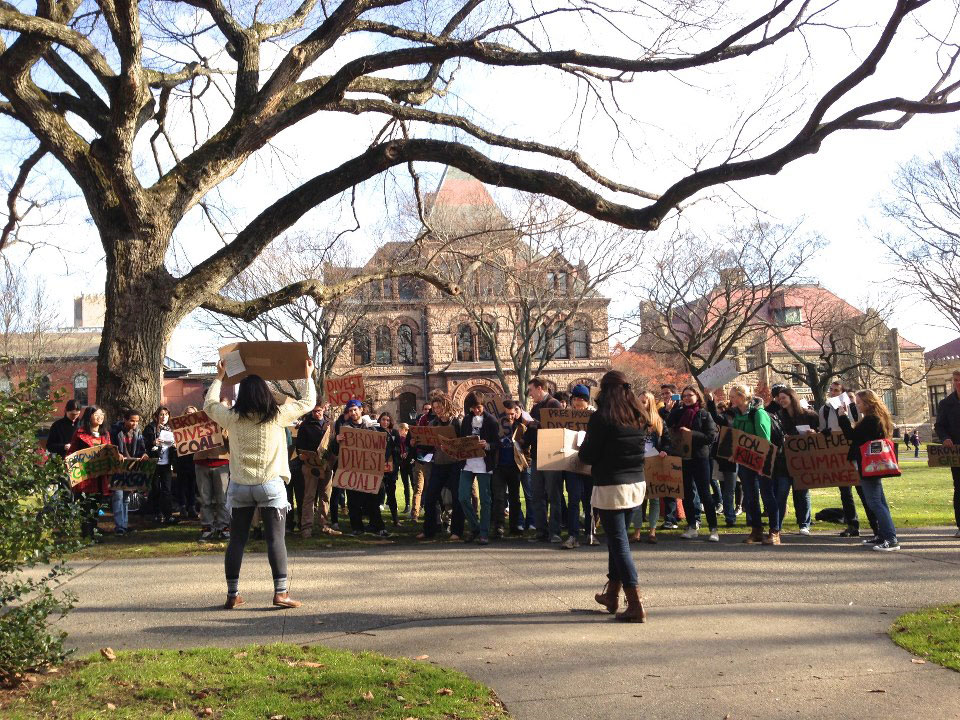 Bill McKibben maybe the closest thing the environmental movement has to a rock star. In November he took to the road, urging colleges to pull their endowments out of fossil fuel stocks, to pressure the industry to address climate change. Living on Earth's Emmett FitzGerald reports from Brown University in Providence, Rhode Island.

CURWOOD: Analysts at the Carbon Tracker Initiative in London calculate that the fossil fuel industry has about 28 hundred gigatons of reserves of oil and gas in the ground.

Trouble is, that’s five times the amount that humanity can burn if we want to keep the global temperature rise below 3.6 degrees Fahrenheit, the target set by the voluntary 2009 Copenhagen accord.

Writer Bill McKibben of 350.org highlighted that math in a story he recently wrote for Rolling Stone magazine, and now he's on the road with what he calls the Do the Math Tour, playing to sold-out crowds from Atlanta to Seattle. Living on Earth’s Emmett FitzGerald has our story from Brown University in Rhode Island. 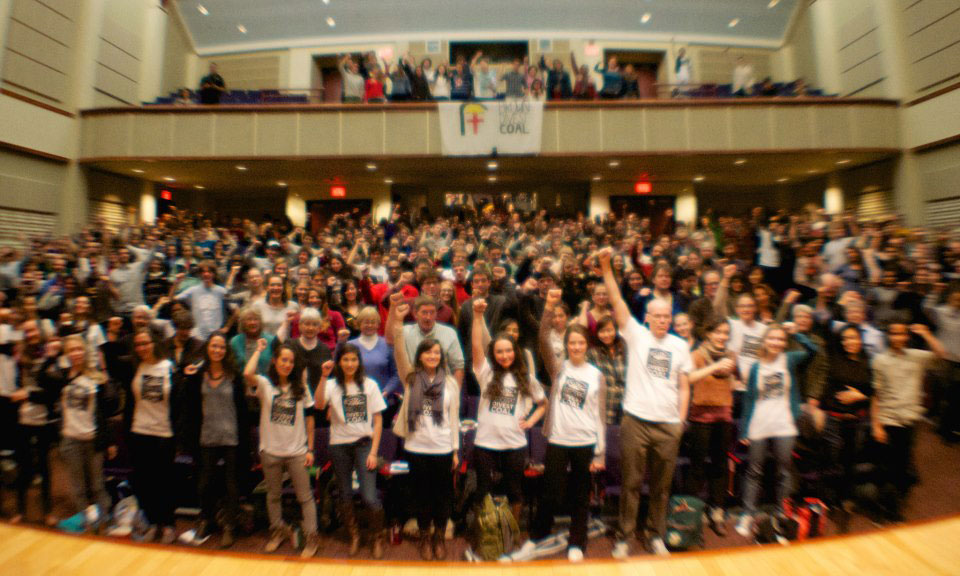 Bill McKibben and the Do the Math Tour at Brown University (Photo 350.org)

FITZGERALD: He wore old tennis shoes and a plain blue buttoned down shirt, the kind of clothes you might expect on a writer from Vermont. McKibben finds it a little funny that his Rolling Stone article went viral.

MCKIBBEN: It was in the issue with Justin Bieber on the cover, but two days later the editor called up and said ‘this is odd, your piece has ten times as many likes on Facebook as Justin Bieber’s’.

FITZGERALD: And Brown University liked him too. This was no ordinary Math lecture, environmentalists from Van Jones to Naomi Klein to the head of Greenpeace all made video appearances. And a group of students piled cases of beer onstage. McKibben compared the effects of binge drinking…

FITZGERALD: …With carbon pollution; a hangover lasts a few hours, carbon emissions, he said, last for geologic time. And he wasn’t only pushing the problem, he offered a way forward. On screen, Archbishop Desmond Tutu, a veteran of the anti-apartheid struggle in South Africa, spoke about how divestment campaigns run by U.S. college students helped to free his country from apartheid.

TUTU: The divestment movement played a key role in helping liberate South Africa. Climate change is a deeply moral issue too, of course. Once again, we can join together with the world and put pressure where it counts.

FITZGERALD: That’s Desmond Tutu, and for Bill McKibben, the only way to stop global warming is to attack the coal industry where it hurts, in the pocket book. He says that universities, with huge endowments invested in the stock market, have a key role to play.

MCKIBBEN: Colleges and churches and other places are where we think about moral issues. Colleges are where we learned about global warming, where the work was done, and if you go to any webpage of any university in America, there’s a long section outlining their commitment to sustainability—they’re greening the campus with new buildings, with bike paths, whatever it is. Well that’s good. We should be greening campuses, and if we are, then there’s no logical reason we’re not greening our portfolios at the same time.

FITZGERALD: In the months since the Do the Math tour hit the road, students at over 100 colleges have launched divestment campaigns. Tiny Unity College in Maine joined Hampshire College as the only schools to commit to divest entirely from the fossil fuel industry so far. The Brown Divest Coal Campaign was established this fall, and has been pressuring the administration to divest from what it calls the "filthy fifteen."

KIRKLAND: The filthy fifteen are basically the worst of the worst.

FITZGERALD: Emily Kirkland is a leader in the Brown Divest Coal Campaign.

KIRKLAND: They are coal mining companies or electric utilities that depend heavily on coal, and they are remarkable for their disregard for human health and the environment. Divesting from coal is something that Brown can do now. Coal is the largest global source of carbon dioxide emissions, and by divesting from coal, Brown can be a climate leader, starting right now.

FITZGERALD: The campaign organized a rally and gathered over 2,000 signatures on a petition in just a month. The student activists hope that the administration will take their demands seriously.

KIRKLAND: We’ve met twice with President Paxon. We’ve presented to a University committee dedicated to overseeing the social responsibility of the endowment. And we’re very optimistic that Brown’s administration will move quickly and make Brown one of the first schools in the country to divest. 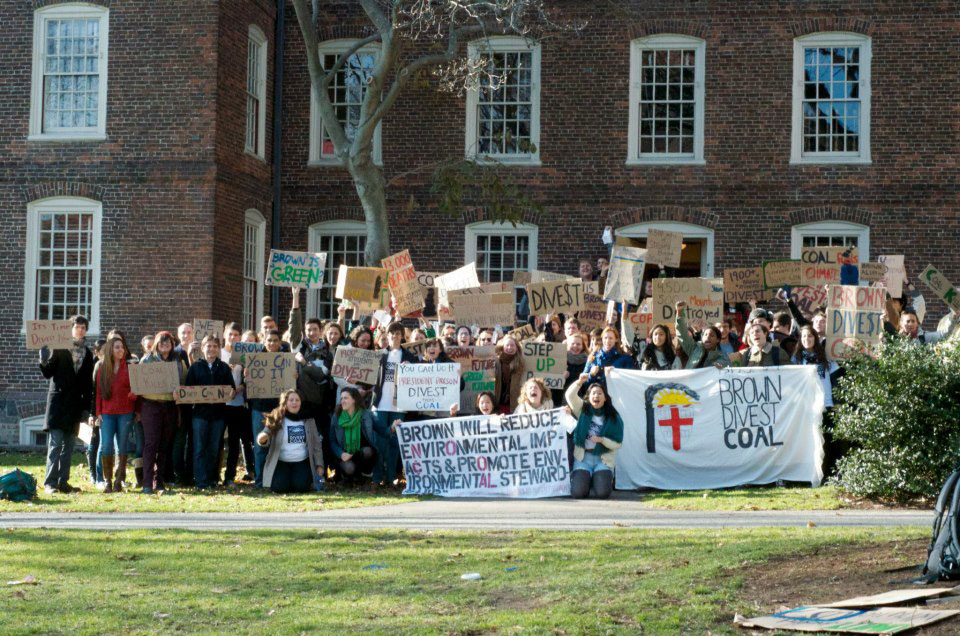 FITZGERALD: As for Bill McKibben, he says that while the tour has been exciting, the road life of a rock star is wearing.

MCKIBBEN: Truth be told, the traveling around in the tour bus is somewhat more romantic in theory than in practice, and I’m a little worn out. The main problem is I’m 6 foot 3, and the bunks that we’re living in are 6 feet. So… but here we are in this biodeisel bus powering down the highway and it is a beautiful, beautiful country. And to wake up every morning rolling down the mountains in a different part of the country is a very beautiful thing.

FITZGERALD: He may be ready for a quiet winter in Vermont, but on this tour, he’s shown that he can bring the crowds to their feet.


Do the Math Campaign

More about the coal divestment movement at Brown University