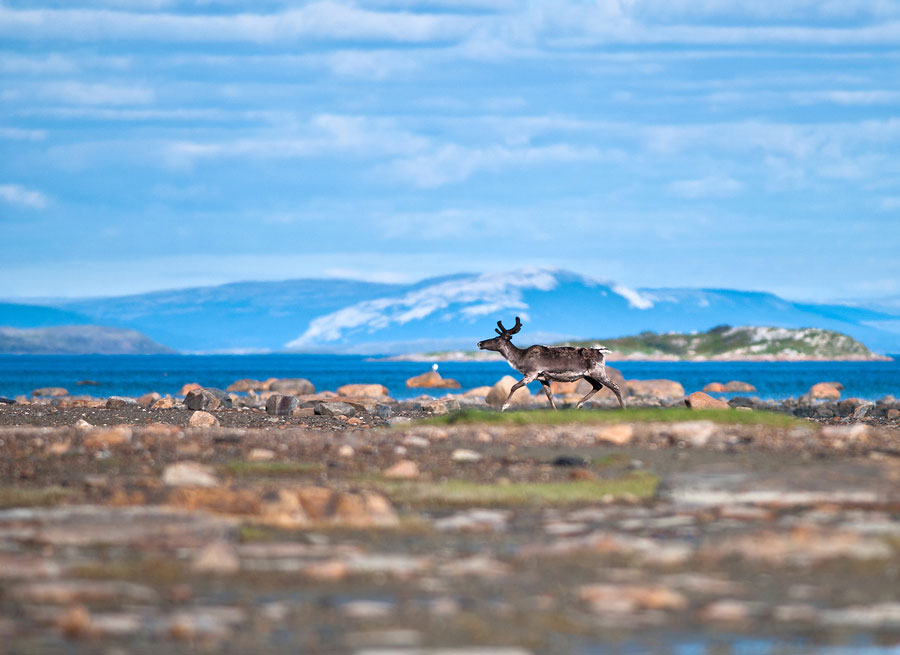 A reindeer near the Arctic Sea. (Bigstockphoto.com)

Reindeer, or caribou, are in dramatic decline in the far north. Jeff Flocken of the International Fund for Wildlife explains that changing weather makes food hard to obtain for some caribou. Also indigenous communities depend on the herds for food and as a cultural touchstone. George Rich, an elder of the Innu tribe in northern Canada, tells host Steve Curwood that he doubts his tribe can survive without a healthy caribou population.

CURWOOD: From Africa we turn now to the Arctic where iconic creatures are also under assault, including a favorite of this holiday season, the reindeer. This time last year, we reported on serious declines in the populations of reindeer or caribou - on Victoria Island in Nunavut, Canada, where the Peary and the Dolphin-Union herds live. Jeff Flocken, the head of US Policy for the International Fund for Animal Welfare, said he was worried about them.

FLOCKEN: They’re in serious trouble. Well, caribou across the world, they’re all found in the northern hemisphere in these cold temperatures, are declining. They think an average decline of about 60 percent from historic highs. And these in the most northern part are even in more trouble. During the last few winters, they’ve found mass die-offs of the Peary ones in particular. Up to 84 percent of the population they think to have been lost.

CURWOOD: And Flocken said he knew what was wrong. 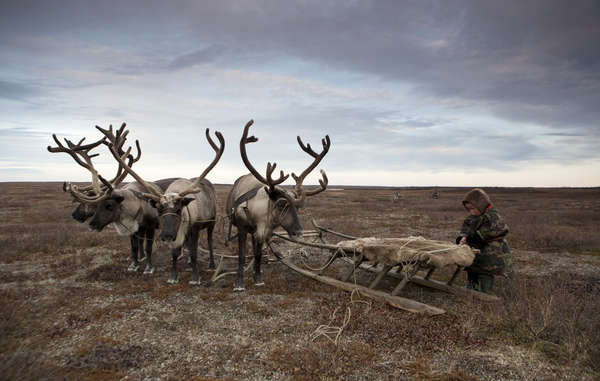 Tribes all around the world, such as Russia’s Nenets, depend on reindeer for their survival. (Photo: © Steve Morgan)

FLOCKEN: It’s climate change. The temperature, the weather and the landscape are all changing in the arctic. So, in particular, with this species - they’re a browsing species - and they need to have access to the different plants and native shrubs that grow in the tundra where they are in the winter. So usually, in past times, there’s kind of a light, fluffy snow that falls in that region, but now, because of the temperature change, they tend of have a heavy, icy rain.

So what’s happening is, it’s freezing over these plants so the reindeer can’t access them for food. What’s happening - they’re starving or they’re spending too much energy trying to find food. As a result - starvation, malnutrition, low-reproductive rates, and that’s causing these die-offs.

CURWOOD: Now, one solution, said Jeff Flocken, would be for the US Fish and Wildlife Service to list these two herds of caribou under the Endangered Species Act.

Well, the Service announced last spring that listing "may be warranted" but no further decision has been reached.

But those aren't the only Canadian caribou that are in decline - the George River herd further east in Labrador is also in trouble, and that's affecting native people who rely on the herds for meat and clothing. A population once estimated to be up to 900,000 reindeer has now been reduced to less than 28,000, and changing seasons are implicated in this decline as well. George Rich is an elder of the Innu tribe. He lives in a community of just 850 people in an indigenous village 150 miles north of Goosebay, Labrador.

RICH: Living in the same environment as the caribou, you notice that the caribou has a lot of problems with black flies in northern Labrador. Climate change which created the early thaw and early spring. Caribou rely on cold weather in the month of June, to able to bear calves. Apparently once everything is nice and warm, black flies will come. And it’s also attractive to the mineral exploration. Once the snow is gone it’s more attractive to the mineral exploration once it’s going on, you know?

CURWOOD: What happens in terms of the mineral exploration? What are they doing?

RICH: Well, ever since the big giant nickel find in 1993, in our territory, it’s been like a tornado of mineral explorations going on. 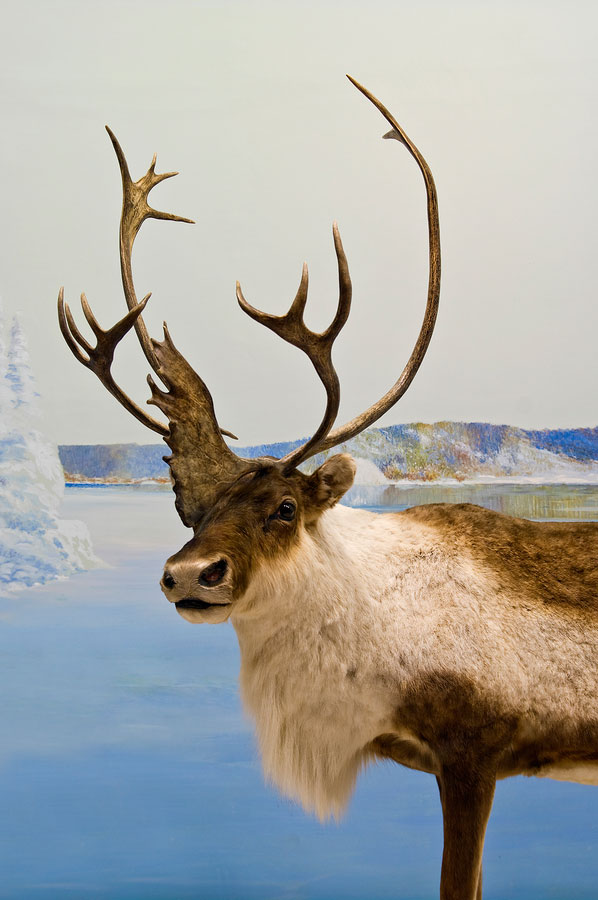 Close up of a caribou. (Bigstockphoto.com)

CURWOOD: Why is the mining so bad for the caribou, in your view?

RICH: In order to get the mineral exploration, you have to have choppers to go from one place to another. And the sound of the choppers really is a devastating sound because they don’t know where to look, all these choppers are going flying all over the place.

CURWOOD: So, it spooks them.

CURWOOD: So, what are you seeing now, have you noticed a difference in the caribou populations?

RICH: Yes, they’ve gradually decreased the last four or five years. We noticed when we went to our hunting grounds, we noticed that there are hardly any caribou -- only one or two showed up. The decline itself has been kind of devastating to the Innu.

CURWOOD: How do the caribou fit into your traditional way of life?

CURWOOD: What’s your favorite story about the caribou?

He married and he went hunting and he left his bow and arrows in the mountain. And his father was very anxious and his brothers were very anxious looking for him everywhere and his footprints were leading towards the caribou herd. Then after that he wasn’t seen at all. The man who married the caribou was living among the caribou just like a human being. As always with the stories that we are told that the caribous are human beings, and this one shows I think that there’s a lot of respect in our culture.

CURWOOD: You sent us a recording of a caribou hunting song that I want to play now:

RICH: The elder that was sharing this song that was passed on by his brother to him, and this song was probably passed on for many generations. It’s a kind of a hunting song, you are so far away, I cannot reach you, I’ll catch up with you and call my friends… in that song.

CURWOOD: Tell me about your culture, what particularly do you do with caribou for rituals among the Innu.

RICH: Well, the main source of things that we do with the caribou once hunting is successful, all the hunters will gather the caribou hindlegs, clean the meat then pound the caribou bones and to what we call the mukushan, which is a feast, for all of the people to attend. I don’t know if you’re familiar with the Catholic church when the priest will hold comunion and give the holy bread to the people -- that’s the kind of sacred thing we do with the caribou.

CURWOOD: How has the scarcity of the caribou herd affected your people and your culture?

RICH: Innu people used to follow caribou all along, a lot of exercise. We used to store maybe one or two caribou in the freezer…

CURWOOD: What do you eat these days, if not caribou?

RICH: We are forced to eat the store-bought food. We live in a very isolated community. Labrador…the only access to that is through by plane and by coastal freighter in the summer time. And when most of the frozen food comes in there, it’s not in a very good situation at all. And then that’s created a lot of problem in diet and eating junk food. And all that has created the problems… a diabetes epidemic is one of the things that we are facing right now.

CURWOOD: A lot of diabetes, you say?

RICH: 30 percent of people in my communities have diabetes. A lot more with the kidney failures.

CURWOOD: How will your community be affected if the caribou disappear from your region altogether?

CURWOOD: I do hope the caribou come back soon.

CURWOOD: George Rich is an elder of the Innu tribe in northern Canada at Labrador. Thank you so much, sir.

RICH: Thank you very much.


More about the Innu

Innu Stories From the Land