Predicting the End of the World 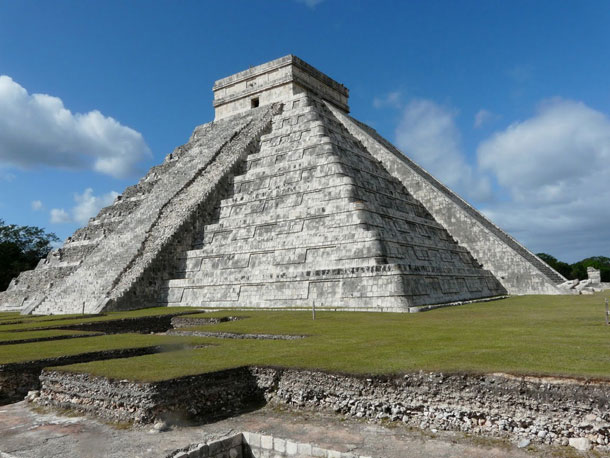 The Mayan Long Count Calendar comes to the end of its 5125 year cycle this month. New age prophecies, based on the ancient calendar, warn the world will end when the cycle concludes. Living on Earth's Bruce Gellerman travels to the Mayan ruins of Chichen Itza to track down the truth.

CURWOOD: It's approaching the end of the year - a time when many of us look back - and look forward. But predicting what's going to happen in the future has often included predictions that there may not be much future - indeed, since the beginning of recorded time there have been predictions of the end of time. And as Living on Earth's Bruce Gellerman reported, that happened in May last year.

TAPE: On May 21.2011 …the date of the rapture…each and every saved person goes to heaven…. How can anyone dare to dispute the bible that the absolute truth that the beginning of the day of judgment together with the rapture will occur May 21, 2011.

GELLERMAN: Of course, in the end, the end didn’t occur; the apocalypse was delayed due to matters of biblical interpretation and math errors. 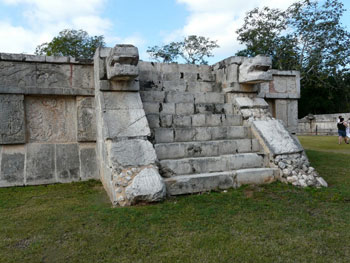 GELLERMAN: But wait! The end is near – again. The internet is filled with fire and brimstone videos and books prophesying the approaching apocalypse, based upon the exquisitely precise astronomical calculations of the Ancient Maya:

VIDEO: According to the Maya calendar this cycle of creation will cease to exist at precisely at 4 ahoo, 3 kencan; Sunday December 23 2012.

GELLERMAN: According to this new age interpretation of ancient Maya time telling, Doomsday is just around the corner.

VIDEO: Will you be ready?

GELLERMAN: Well, it depends. Seems there’s some dispute even among Maya end-of the world watchers. Doomsday could either be December 23rd, 2012, when a cosmic collision with Planet X Nibiru destroys earth - or our demise could come on Dec. 21st at exactly 11:11 universal time. That’s the winter solstice and, for the first time in 25,765 years, the sun will align with the center of the Milky Way.

[SOUNDS OF WALKING ON GRAVEL AND WIND]

GELLERMAN: But before abandoning all hope and earthly possessions I decided to find out what’s behind the Maya Doomsday prophecy. So I traveled to the Maya ruins of Chichen Itza, on Mexico’s Yucatan peninsula. 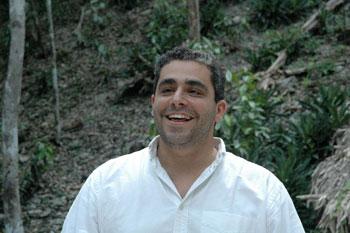 VENTURA: Chichen Itza was a religious capital for the Mayas. It was one of the most important cities of the whole Mayan territory of the pre-Hispanic time.

GELLERMAN: By the time Spanish conquistadors arrived at Chichen Itza in 1526 the city had been abandoned for nearly 500 years. The collapse of the Maya Civilization at Chichen Itza, and the disappearance of their ancestors who lived centuries before in the lowlands of Central America, comprise one of the great archeological mysteries of our time. Scientists have searched these ruins high and low looking for answers. So did I:

Whoa, look at this….

VENTURA: This is the pyramid of Kukulkan or Quetzalcoatl, and both words mean the feathered serpent.

GELLERMAN: The pyramid at Chichen Itza towers over the landscape. Sound echoes as tour guides clap to demonstrate the extraordinary acoustics of this sacred place. At the equinox, a shadow of the feathered serpent can be seen slithering down one of the 4 staircases.

Each has exactly 91 steps. Added together with the top platform, that equals 365, the days in a solar year. The Maya had only stone tools and lacked the wheel, yet they were master mathematicians, architects and astronomers.

VENTURA: What happened is the pyramid, it was working as a calendar, and at the same time was an astronomical observatory.

GELLERMAN: Was it accurate?

VENTURA: Oh yeah, definitely yes. Mayan calendar, I dare say it was the most accurate calendar that a human being ever had. Right after the Maya, the next one is our calendar, the Gregorian calendar. So these people had a great knowledge of astronomy.

GELLERMAN: The Maya had not one calendar, but three – the solar calendar, a religious calendar of 260 days, and the Long Count: precisely 1,872,000 days, or 5,125.36 years, starting from the time the Maya believed the world began. The Long Count ends - in December 2012.

GELLERMAN: Well, I searched for, and found, an expert who really should know.

SATURNO: I’m William Saturno. I’m an archeologist at Boston University, my specialty is the ancient Maya.

SATURNO: I wouldn’t bet on it. That’s unlikely. I mean, I guess it’s as likely to end on that date as any date before it or after it, in reality.

GELLERMAN: Professor Saturno says time is relative. It’s all a matter of which calendar you use.

SATURNO: Now there may be different calendars, you might be in year 5264. The Jewish calendar uses different numbers. The Chinese calendar uses different numbers. But all of them represent a count since we started counting. And the Maya Long Count is just that. Now the Maya Long Count is sort of interesting to us because it works sort of like an odometer in your car.

Now, just as in a car you used to only have enough digits in an odometer for 100,000 miles, although that marks a great passing, most of us are pretty sure that our car isn’t going to vanish in 100,000 miles; that a car doesn’t in fact come to an end. Right? That, “Oh my God, I’m approaching 100,000 miles, it’s going to explode, it’ll disappear, I’ll be in it, what if my kids are in it?” We don’t bother ourselves with that. We know that even if all of the zeros go back to zero, we know that it’s not going to disappear.

GELLERMAN: Actually, scientists believe 65 million years ago much of life on earth did disappear when a giant meteorite struck the northern Yucatan coast, not far from Chichen Itza. Jorge, my guide, says the cataclysmic impact also helped create the cenotes, or underground limestone sinkholes, that today store most of the water on the arid peninsula. 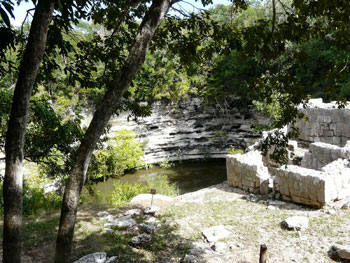 VENTURA: This is the sacred cenote. They believed that the rain god was living at this cenote. Actually at the Chichen Itza area, there are about eight of them. Eight!

GELLERMAN: In this dry place with no above ground rivers or sizeable lakes, the water filled sinkholes were life sustaining. And some were sacrificial sites, as archeologists discovered when they drained the sacred cenote.

VENTURA: In this one the archeologist took out 251 human skeletons so far. They were sacrifices, sir. They would jump alive into the sinkhole.

GELLERMAN: An offering to the god ---?

VENTURA: An offering to the god, to the rain god Yun Chaac that they thought was living in this sinkhole here.

GELLERMAN: Apparently, the sacrifices weren’t sufficient. The rain god didn’t deliver. Around the 9th century, the Yucatan suffered a severe drought, made worse by deforestation. The Maya had cut down the forest, clearing the land to grow crops for their cities.

VENTURA: You know the drought would bring a lot of problems like no food, and fights, you know, invasions, and at the end of the season the people went away looking for a better place to live.

SATURNO: When we talk about the collapse of Maya what they’re really talking about is the collapse of government. There’s evidence for drought, you know, a few drought years would lead to big problems on a social level. Is it the cause? Well, it’s not the drought that causes the collapse. It’s the human response that causes collapse.

GELLERMAN: So what is the lesson, if any, that we can learn from the Maya?

SATURNO: The lesson is a very poignant one. The lesson is really that we need to be more flexible, that we need to have the flexibility that enables us to see the writing on the wall and then react to it. Because if we can’t react, all the lessons we can learn are simply lessons for the next generation - the generation that rebuilds after collapse.

GELLERMAN: Boston University Archeologist William Saturno ending that report by Living on Earth’s Bruce Gellerman. And as the Maya Long Count completes its cycle, a reminder that all things come to an end, and navigating the time left for our civilization is in our hands.