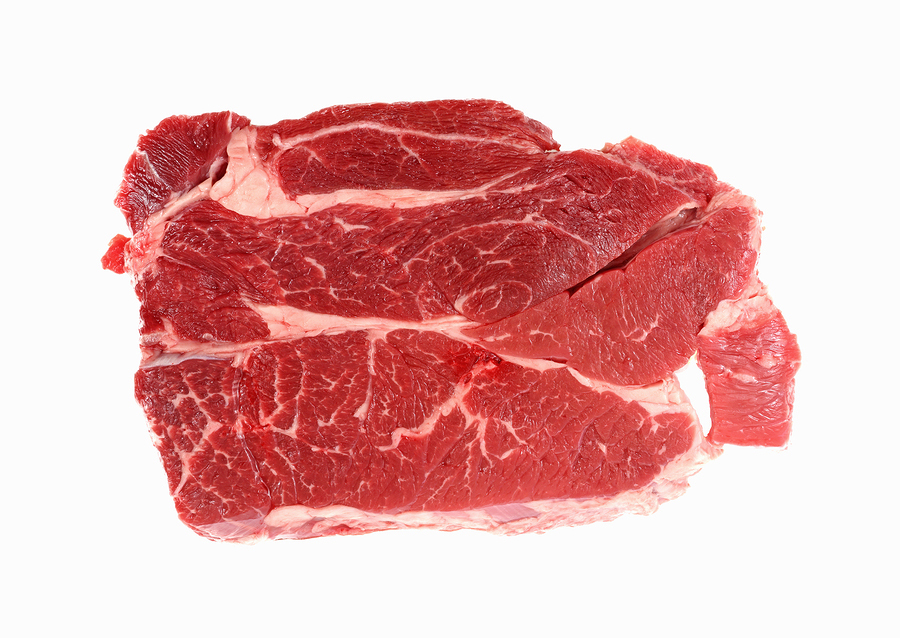 Some research suggests that up to 90% of beef sold in the US has been mechanically tenderized. (Bigstockphoto.com)

To make cheaper cuts of beef less tough, processors mechanically tenderize it with small needles or blades. Sarah Klein from the Center for Science in the Public Interest worries that the practice can insert dangerous pathogens like E-coli into the interior of the meat. But Auburn University professor of meat science, Christy Bratcher tells host Steve Curwood that mechanically tenderized beef is safe as long as it is cooked to appropriate temperatures.

CURWOOD: By the way, dairy and meat farmers get little or no federal subsidies… and drought can make for a tough beef market. And talking of tough - the Kansas City Star recently investigated mechanically tenderized beef. A year-long probe of the practice found it's pervasive throughout the American beef market.

And while it may improve the texture, mechanical tenderizing can create a hidden host for life-threatening pathogens. Sarah Klein is a Senior Food Safety Attorney at Center for Science in the Public Interest.

KLEIN: You know, many of us think of tenderizing as something you used to do in your kitchen with a mallet, but the process that they have now is not at all like that. We’re talking about hundreds if not thousands of tiny little needles or blades, very very small, making a bunch of teeny tiny little incisions into the meat. It’s supposed to make it a little more tender, as the name suggests. Meat today is a little more tougher because of the way we’re raising cattle. 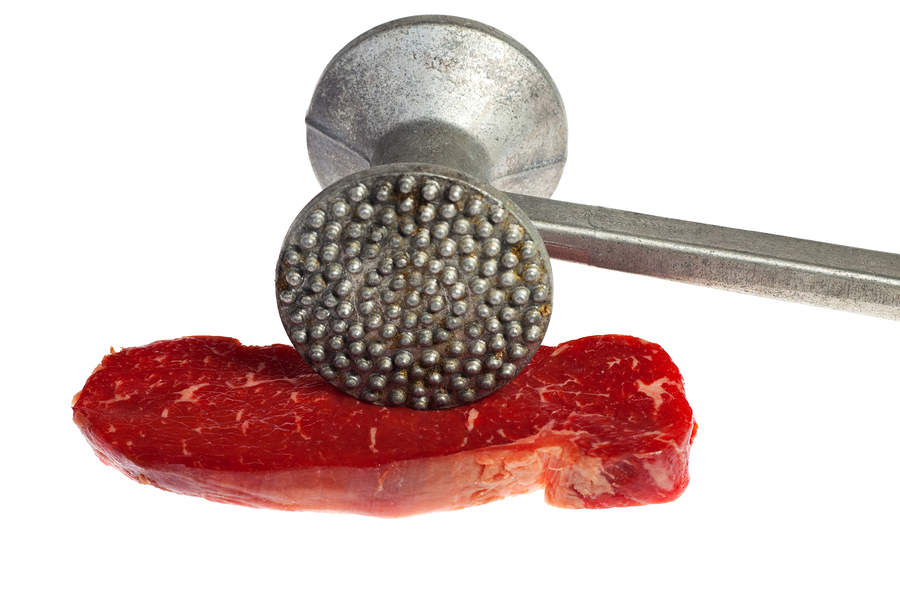 The life-cycle has been compressed and we’re giving animals growth promotants so that we can pack more meat on them in a shorter period of time. And the theory is that that makes the meat tougher in the end. So, the beef industry has found a way to tenderize the meat rather than changing the raising practice.

CURWOOD: Why is mechanically tenderized beef more dangerous than beef not tenderized in a mechanical fashion?

KLEIN: Typically, the pathogens that we’re concerned about with beef… they exist on the hide of the animal, they come in the form of manure, and they’re transferred to the interior of the animal during processing. Sometimes the bacteria become aerosolized or bits of the manure will fly onto the carcass. Those things get trimmed off into steaks. And if you left that steak alone when you cooked it, you’d almost always sear off that contamination even if you left the interior of that steak rare or medium rare.

CURWOOD: What are the pathogens that you’re concerned about here?

KLEIN: We’re primarily concerned about E.coli. These are pathogens that don’t cause generally a mild gastrointestinal illness, the kind of thing, you know, where you stay home for a couple of days with diarrhea, these are serious, serious food borne illness that can result in everything from kidney failure, long term consequences like arthritis, or even paralysis or death.

CURWOOD: How many people do you think come down with these afflictions from eating beef in the United States in a given year? 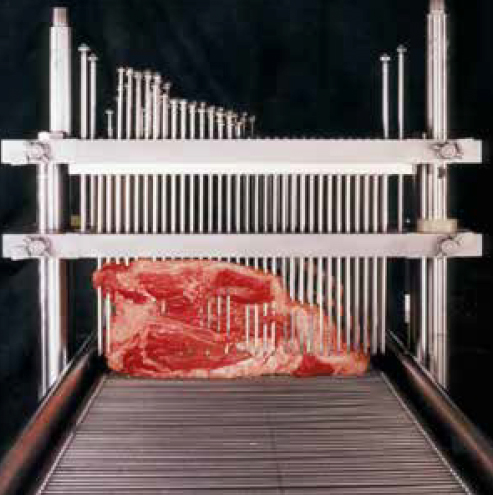 A typical blade tenderizer like this breaks down muscle fibers and connective tissues. (American Meat Institute)

KLEIN: It’s hard to know exactly because the way that we report foodborne illness to the Centers for Disease Control means that all we know is kind of just the tip of the tip of the iceberg. What we do know is 48 million Americans are getting sick from foodborne illness every year. 3,000 American are dying every year. It’s hard to know exactly how many are those are attributed to beef, but we know that the number is not insignificant.

CURWOOD: So, there I am now, I’m looking at my organically-fed, grass-fed beef. Am I running the risk of… if I were to bite into that… of having it been mechanically tenderized?

KLEIN: Yes. I think it’s important for consumers to know that organic and grass-fed are judgments of humane treatment. They’re judgments of the antibiotic use that has gone into the production of that animal. They are not themselves indicators of any greater safety protection from acute illness.

CURWOOD: Please give me an estimate of how much of beef consumed in the US has been mechanically tenderized, and where a consumer might be most likely to run into it.

KLEIN: Unfortunately it’s difficult to know how widespread this process is. Some estimated it could be as much as 90 percent of the intact product that’s sold in the US, is not intact, that it to say that it’s been tenderized or blade tenderized in some way. I think it’s fair to say that any time a consumer is eating steak – whether they’re eating it in a restaurant, in a cafeteria, in a hotel, or in their own kitchen where they purchased a piece of meat from the grocery store, it is highly possible that that meat has been needle tenderized. Because there’s no labeling, there’s really no way for a consumer to know.

CURWOOD: So, as I understand it now in this conversation, you’re saying that the vast majority of beef in this country has been mechanically tenderized but the US Department of Agriculture doesn’t require that beef producers label it as such, why is that?

KLEIN: USDA is actually now considering labeling. I think the Agency has finally come to recognize that this is a gaping loophole in food safety. An organization that works with the retail sector, that is with restaurants and grocery stores, has also asked for the labeling, so that their members can comply with rules that require them to cook ground beef products differently than steak products.

CURWOOD: So the vegetarian folks don’t have to worry about this, but what about those who do want to consume beef. What should be done, in your opinion, to make beef more safe for them?

KLEIN: The most important thing for consumers to do is to practice defensive eating. And that is make sure that you’re handling your meats carefully to avoid cross contamination, if your raw meats are carrying pathogens you want to make sure that those don’t spread around your kitchen.

So, we don’t use the same cutting board for meats that we’re then going to use for raw produce items, and most importantly, cook your meat thoroughly using a meat thermometer. Check to make sure that it’s reached the correct internal temperature. It’s far better to adjust your palate to a more well-done meat then it is to suffer from a serious foodborne illness.

CURWOOD: Sarah Klein is a Senior Food Safety Attorney at the Center for Science in the Public Interest, in Washington. Thank you Sarah!

CURWOOD: We called up the American Meat Institute for their response to the Kansas City Star articles. They referred us to Christy Bratcher, an assistant professor of Meat Science at Auburn University in Alabama. Christy Bratcher, Welcome to Living on Earth.

CURWOOD: Now, can you estimate for me, just how much of the beef produced in the US has been mechanically tenderized?

BRATCHER: I don’t think I could put a percentage on that number. Typically a product that is going to go to restaurant that is a select or lower grade, is tenderized if it’s a steak cut.

CURWOOD: How much of the select beef do you think there is proportionally in the US? Is this more than half, do you think, or three quarters?

CURWOOD: How safe is the process of mechanical tenderization? There’ve been questions raised that it promotes the spread of E. coli if the meat isn’t properly cooked.

BRATCHER: You know, I don’t consider it a large problem at all. Obviously there have been recalls and serious illness of concern associated with mechanically tenderized beef. But those are very unfortunately incidences that happen on a very low incident occurrence. Those people have gotten sick and it has, you know, affected the rest of their lives or unfortunately people have lost small children to them, and those are horrible events that have happened. However, if we are cooking our beef to a safe temperature, you shouldn’t have problems with bacterial growth.

CURWOOD: Now, the Kansas City Star has published a series of articles that have looked into the beef industry. And they raised a number of concerns about mechanically tenderized beef – they say look, this creates a perfect host for E. coli and they pointed to cases where people had gotten sick. The Kansas City Star - overreacting in your view?

BRATCHER: You know, I believe that they are overreacting. I think they’re also doing a good job of trying to educate consumers, but I also think that they need to look a little bit deeper and get some scientific information before going out and trying to scare the general population about practices that are very safe within the meat industry and that has had a lot of research done to prove that they are safe.

CURWOOD: Cristy Bratcher is Assistant Professor of Meat Science at Auburn University in Alabama, thank you so much.

BRATCHER: Thank you for your time.