Playing for Animals and Humans 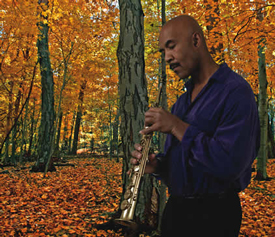 Musician Stan Strickland has played his saxophone for animals at the zoo, and for humans in many clubs. He tells host Steve Curwood about how gorillas respond to jazz, and leads the audience in an African chant to call back the light.

CURWOOD: Donna, I want you to stick around while we talk to Stan Strickland, who's been making the music here for us today. And he's also been trying to spread his message to the animal kingdom, I mean literally. Now you used to work at Boston's Franklin Park Zoo. You're not allowed to feed the animals there but I understand, Stan, you have been playing to the animals. How did that gig come about?

STRICKLAND: Colleen Kelley, who works with the zoo, had this idea that the animals needed to have a little entertainment, something to break up the boredom from looking at all these silly people. (AUDIENCE LAUGHTER) So she started a series of music performances and I was asked to do one.

CURWOOD: Hmm. So, how did the animals respond to all this?

STRICKLAND: Well, it's kind of interesting. You know, you don't really know what an animal is thinking. You have to kind of project. I played for 3 different animals. The first was zebras.

CURWOOD: Can you show me what you played for the zebras?

STRICKLAND: Well, I had my trusty soprano saxophone. And in the very beginning it was a photo shoot to sort of give some publicity. So we just pretended to play -- I was blowing air sort of like (SOUND OF AIR ESCAPING). And just to make sure they wouldn't get too spooked out. But they seemed to not mind our being there, so we started playing a little bit, a little bit like... (SAX AND DRUM BEATS) Then we went over to and met Koby. You must know about Koby.

CURWOOD: Oh, the gorilla. I've met him, and Kiki, too, there.

STRICKLAND: And Kiki. Koby is really pretty cool. At first, Koby was back somewhere, we couldn't see him. And Kiki was out sort of bathing in the sun. So I gave out a big call on the saxophone to see if I could get his attention, like: (TREMOLO ON SAX) And Koby kind of walks out like Yo, what's up man? (AUDIENCE LAUGHTER) Really. (GRUNTS) And one thing I learned, though, about at least the gorillas is that one of their ways of communicating is by throwing things, right? (AUDIENCE LAUGHTER) And they throw whatever is around, so there are 2 areas of the Franklin Park Zoo for the gorillas. The outside area, there's some branches and some things, and occasionally Koby would throw some branches. But when we went inside, the other male gorilla, what's his name?

STRICKLAND: Yeah. So I was there the 2 times with musician friends Bob Moses, a drummer, and the second time with Wesley Wirth. So Wesley and I had seen Koby throw stuff. So when we went inside, Vip?

STRICKLAND: Vip was like standing there and he reached down to grab something to throw, and Wes and I knew it was coming, so we kind of like, kind of ducked a little bit. And unfortunately some of the other people in the audience didn't quite know what was happening, and as Vip sort of tossed little gorilla poop out (AUDIENCE LAUGHTER) it kind of splattered on a little girl's leg, and that was kind of yucky. (AUDIENCE LAUGHTER)

CURWOOD: Is there a tune that they seem to like?

STRICKLAND: Oh yeah, so, we kind of played something like this for Koby: (LIVELY SAX AND PERCUSSION)

CURWOOD: That was a great concert for them. Donna, is there any way to tell whether the animals really liked the music that Stan was playing?

FERNANDES: Well, I think probably the most positive sign is that the animals generally approached the exhibit barriers to try to get as close to the musicians as possible. It's still hard to decide whether that's just a novel situation or a novel noise and they're curious, or whether they actually like it. But if the musicians continue to come and the novelty wears off, yet they still approach the barriers, I think it suggests that they really do enjoy the music.

CURWOOD: Well thanks for playing what you did for the animals, Stan. I'm wondering if you could play something for us, now? I think it would be appropriate for us to honor the winter spirits and call for the return of the sun, huh?