Fracking With Recycled Mine Water 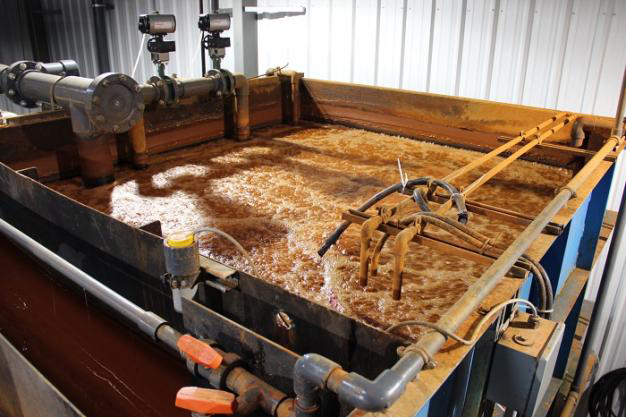 Thousands of abandoned mines in Pennsylvania are full of polluted water. Now the fracking boom is is being seen as a way to pay for cleaning up that water by reusing it. Reid Frazier reports.

CURWOOD: One man’s trash is sometimes another man’s treasure, and that may be the case when it comes to water quality issues in Pennsylvania. There are also thousands of abandoned mines that leach metals and other pollutants into the state's streams. And now it appears that fracking could actually be one way to clean up this water, and some in the gas industry are pushing legislation to allow it. Reid Frazier of the public radio program the Allegheny Front caught up with some folks who are demonstrating the potential of recycling old mining water through fracking.

FRAZIER: Bill Sabatose stands in a small industrial building. He’s on a platform, next to what looks like a big hot tub, filled with really dirty water.

SABATOSE: We’re aerating it, we’re trying to oxidize the iron, so you can see how blood red it’s getting.

FRAZIER: The liquid is abandoned mine drainage, or AMD. This AMD came from a mine just up the hill. Sabatose has spent much of his life cleaning up this dirty water. He’s president of the Toby Creek Watershed Association, a local group that built and now runs this facility in northwestern Pennsylvania. The facility passes the AMD through a series of treatments. At the end of the line it flows into a tank the size of an above-ground pool.The water here is clear.

SABATOSE: In this particular tank we’re raising brown trout. A lot of people just love to come up here and just look at them, I guess it mesmerizes them. They just look like a big aquarium.

FRAZIER: The fish will be used to stock streams around the state. The clean water in the tanks eventually runs into the Brandycamp Creek, a tributary to the Allegheny River. Sabatose grew up here, near the town of Brockway. The region has a long mining history. The streams all used to be the color of rust.

SABATOSE: There wasn’t a fish within 100 miles of this place, so it was pretty bad. 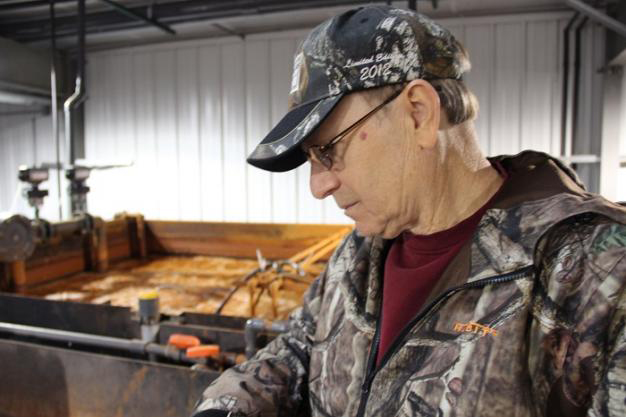 FRAZIER: Since the group built this treatment plant in 2005 with a state grant, the Brandycamp started getting cleaner. But there was a problem. The watershed group had no idea how it would pay to keep the plant running.

SABATOSE: It was scary because we didn’t have a plan.

FRAZIER: Then around five years ago, a potential solution emerged: fracking. Drillers use millions of gallons of water, along with sand and chemicals, to frack natural gas out of underground rock formations. Frackers typically use freshwater, but a few companies approached Sabatose with an idea. Could they use his cleaned up minewater?

SABATOSE: Well, I thought “there’s all this water, and I need more money to treat all of it”... and I thought, “well, they were looking for water,” and I said ‘try it.’ And they tried it.

FRAZIER: And it worked. The gas companies paid Sabatose’s group for the water, although technically it’s a donation. And with the money the group could treat more abandoned mine drainage. This idea of using old mine water to frack is picking up steam in Pennsylvania. Regulators faced with a $15 billion abandoned mine problem want to see more of this. They see it as one way to get AMD out of streams by putting it in fracked wells. Some companies have already started doing it, but others are balking. Andrew Paterson of the Marcellus Shale coalition say the issue is liability. 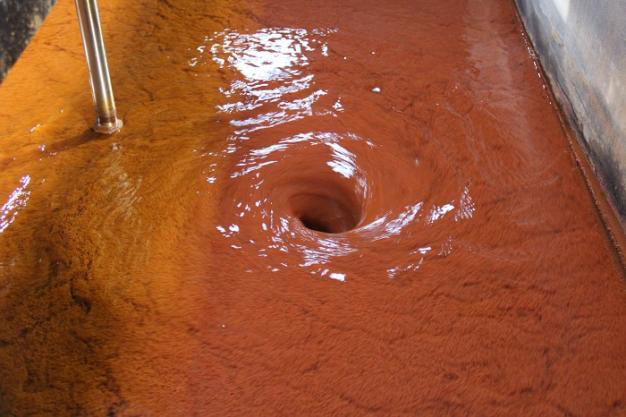 After iron oxides and sulfates are taken out of the mine water, it is discharged into Brandy Camp Creek (Photo: Reid R. Frazier)

PATERSON: The “you touch it you own it” concept.

FRAZIER: He says drillers are worried that they’d be held liable for the condition of the abandoned mine in perpetuity, even if they only used the water for a few months.

PATERSON: It’s not clear on a state or federal basis that if you were to use that water, that by using it you have not inherited the long?term treatment of that source of water.

FRAZIER: Watershed groups like Sabatose’s don’t have to worry about this ? state law protects them from lawsuits over the minewater they treat, because they’re considered good samaritans. A bill being pushed by the gas industry and the DEP would add gas companies to that list of good samaritans.

CARLUCCIO: Well, we see this as a “lose?lose?lose”.

FRAZIER: Tracy Carluccio is with Delaware Riverkeeper, an environmental group. She says gas companies are not good samaritans. Under the bill, companies wouldn’t have to clean up the minewater or buy it from groups like Sabatose’s. They could simply withdraw the water they need from a polluted mine.

CARLUCCIO: They’re not cleaning it up. They’re taking very polluted fluid and making them more polluted.

FRAZIER: But some see this as a way to peck away at the state's historic abandoned mine water problem. Radisav Vidic, an engineer at the University of Pittsburgh, says allowing frackers to use mine water polluted from mines keeps that water from polluting the rivers.

FRAZIER: Even if the bill passes, no one is promising that fracking will solve the state’s abandoned mine water problems. At current funding levels, cleanup of the thousands of historic coal mines in Pennsylvania is projected to take up to 50 years.

CURWOOD: Reid Frazier brought us that report from the Pennsylvania public radio program the Allegheny Front.