Beyond the Headlines ‑- Noisy Oceans and Wind Power in Spain 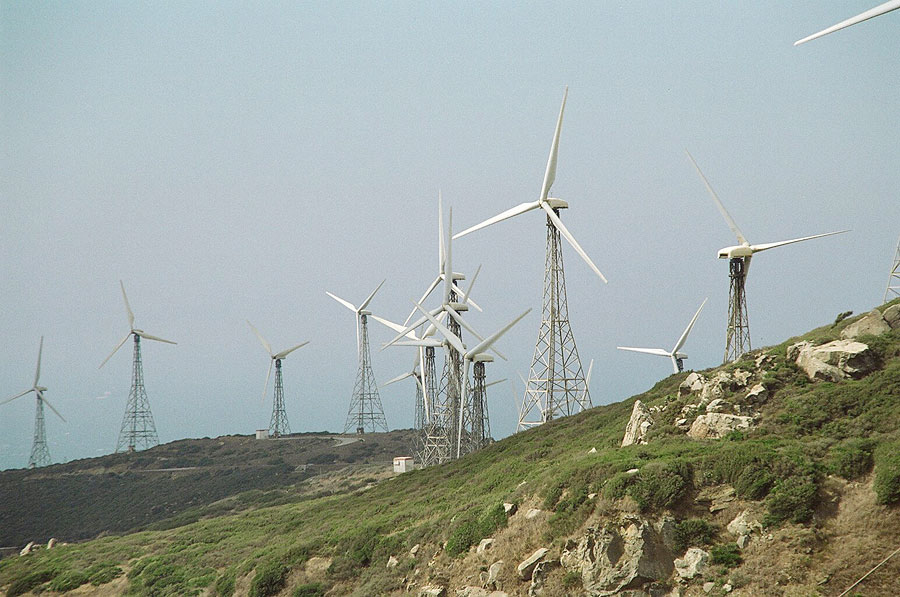 In a trip beyond the headlines today, Peter Dykstra of Dailyclimate.org and Environmental Health News, ehn.org, discusses with host Steve Curwood how wind power reigns in Spain, how the oceans are getting noisier, and recalls the inspiring environmental words of Richard Nixon in the State of Union speech 44 years ago.

CURWOOD: Time now, to peer behind the headlines with Peter Dykstra, who publishes the Daily
Climate.org and Environmental Health News. He joins us now from Conyers, Georgia. Hi there,
Peter.

CURWOOD: So what have you got for us this week?

DYKSTRA: Well, how about we start off with a little good news: wind power. Wind power reigns
in Spain. There was a government report, a Spanish government report out that says Spain got 21.1
percent of its electricity last year from wind power. That edges out the number two source: nuclear.
There’s also been an increase in hydropower in Spain, the hydropower because they had a wet
year and, of course, if you’re in Spain, and you have hydropower, the source of hydropower is, of
course, is the precipitation in Spain.

CURWOOD: Ah, yes, how precipitous was Spain about this? I mean, is this conscious, or just a
result of Spain’s bad economy, and the fact that factories aren’t using as much conventional power
these days?

DYKSTRA: Well, it’s a little bit of both. The coal and nuclear for electric generation declined
in Spain last year. That’s certainly partly due to the fact that the slower economy needs less
electricity. But Spain has also built windpower in as part of the path out of a bad economy. It’s a
booming business in Spain just like it is in other European countries like Denmark and Portugal.

CURWOOD: So, that’s our dose of good news for the week, that’s Spain’s top source of energy is
wind, but, Peter, I suspect you have some of that other kind of news, huh?

DYKSTRA: I’m afraid so. As we aggregate the news each week at EHN.org, we picked up a story
from a mid-sized newspaper, one that deserves a lot of credit for doing a great job of consistently
covering the environment, that’s the Wilmington News-Journal, the biggest paper in the tiny, very
low-lying state of Delaware. And a reporter there named Molly Murray filed a piece on our noisy
oceans. That’s not a totally new topic, but with marine mammals and fish species so dependent on
sound - they use it for communication and they use it for navigation - the increase in ship noise and
other human activity is a big deal and a potentially big change in the marine environment.

DYKSTRA: That’s right. Molly Murray, the reporter, called it the urbanization of the ocean. I
think that’s a pretty apt phrase. Because we’re not just dealing with ship noise, there’s military
activity, including weapons testing, and on the East Coast, off the coast of Delaware, there’s the
possibility of oil exploration using seismic testing. Seismic testing is the use of these immense,
noisy cannons that shoot airbursts at the sea floor, and they read the signals they get back from
the sea floor and figure out whether or not there’s oil beneath that part of the ocean. The scientists
don’t know how much ultimately this noise is going to impact whales and dolphins and some fish
species and all the marine life, but they know it’s going to have some kind of impact so we’ll just
have to wait and see.

CURWOOD: It doesn’t sound good to me, Peter, I have to say. And, well, finally, bring us
something from the environmental calendar, would you please.

DYKSTRA: You know, one of my favorite environmental things ever said by an American
President: 1970 State of the Union speech, 44 years ago this week, and I quote, “Restoring nature
to its natural state is a cause beyond party and beyond factions. It has become a common cause of
all of the people of this country.” Those words spoken by President Richard Milhous Nixon. 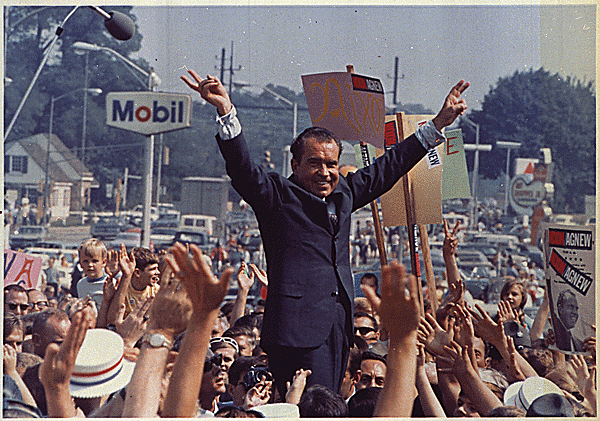 Richard Nixon on the campaign trail in 1968. He used environmental issues to his political advantage, but privately he was scornful of environmentalists (photo: National Archives)

CURWOOD: Richard Nixon. And before he was forced out of office, he signed the Clean Air Act,
the Endangered Species Act, and he founded EPA. But, tell me. Peter, was Richard Nixon really a
tree-hugger?

DYKSTRA: No. Richard Nixon wasn’t a tree-hugger. You've got to remember that he also vetoed
the Clean Water Act. He said it was too costly. Congress overrode his veto and made the Clean
Water Act law. Nixon was a shrewd politician. He needed an issue to blunt the unpopularity of the
Vietnam War which he inherited. He needed to get a little cozier with an environmentally-minded
Congress. But when the cameras were off in the privacy of the Oval Office - and we know this
thanks to that Oval Office tape recorder that later got him in a whole lot of trouble - he gave a very
different view of environmentalists. He met with auto executives, and he said, environmentalists
wanted to make Americans live “Like a bunch of damned animals,” but when the TV cameras were
rolling, he told us to play nice with each other, and with the planet.

CURWOOD: And thank you, Peter, for playing nicely today. Peter Dykstra is publisher of
Environmental Health News and the DailyClimate.org. ‘Til next time, Peter.

DYKSTRA: My pleasure, Steve. Thanks.

CURWOOD: You can find links to all these stories at our webpage at LOE.org.

Peter Dykstra is the editor of ehn.org

In the 1970 State of the Union speech, President Richard Milhous Nixon: said “Restoring Nature to its natural state is a cause beyond party and beyond factions.