There are not enough pipelines to carry all the oil being produced in North Dakota to refineries. Much of the oil now travels by train, but carriers aren't required to warn communities that oil trains are traveling through. As Ashley Ahearn reports, recent accidents have lawmakers in the northwest planning to introduce regulations.

CURWOOD: Well, one substance that's not in short supply in the American Midwest is oil. The booming Bakken fields of North Dakota have created a glut that's looking for ways to move to refineries. There's not enough pipelines, so that's led in turn to a huge increase in the number of trains carrying oil across North America. And there have been several spectacular oil train accidents since the boom began, including one last July in Quebec that cost the lives of 47 people. These accidents have prompted calls for regulations to improve the safety of oil trains and better protect the communities the trains traverse. From the public media collaborative EarthFix, Ashley Ahearn reports.

Two Washington refineries are handling Bakken oil, with several more terminals in the permitting process. In Oregon, at least one site is receiving trains of Bakken oil. But state agencies in the Northwest aren't getting the information they need to prepare for an oil train accident. Oil and rail companies aren't required to tell state officials how much oil is on the move and what kind of oil it is. Nor do they have to reveal the details of their emergency response plans.

GILLES: They've got their own geographic response strategies put in place for their rail lines that they haven't shared with the folks here in Oregon.

AHEARN: Bruce Gilles is the spills manager for the Oregon Department of Environmental Quality. He's in the same boat as Dale Jensen, who handles spill response for the Washington Department of Ecology.

JENSEN: There's certainly that concern that we don't know exactly what's in their plan and what their response strategies are.

AHEARN: Jensen says that in Washington, oil refineries have worked with state agencies to prepare for an oil spill on the water, but there's an information gap when it comes to rail. BNSF Railway declined to be interviewed for this story but a spokesperson emailed responses to questions. The spokesperson said the company trains personnel and local officials to respond to spills of hazardous materials. BNSF Railway is investing in new equipment along the Columbia River and in Klamath Falls.

Another issue is the rail cars. Companies don't have to tell state agencies what kinds of rail cars they're using to move the oil. Jensen says he's been told that in Washington oil companies are moving their product in what are called DOT-111A cars.

JENSEN: It's the highest level of safety of the rail cars that are being manufactured right now so that's good news for us here in Washington.

AHEARN: But is it? DOT-111As are the same kind of cars that exploded in Quebec. A federal board sounded the alarm on these cars in a report they released more than 20 years ago. The report found that the DOT-111A rail cars were about twice as likely to be punctured and release their contents as other tank cars tested. 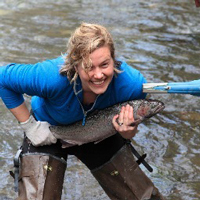 And the design of the DOT-111As has not substantially changed, according to a spokesperson from the National Transportation Safety Board. Federal agencies are in the process of upgrading tank car standards. In the meantime, the DOT-111As are rolling through cities and towns in Washington and Oregon. But politicians are taking note.

FARRELL: Fundamentally communities have a right to know when a substance that potentially is very dangerous is coming through the community.

AHEARN: Jessyn Farrell is a state Representative from Washington's 46th district. She's introducing new legislation this session that will require oil and rail companies to regularly update state agencies about oil train routes and quantities of oil moving through the region. She knows it won't be an easy sell in the state legislature.

FARRELL: It's going to be a really hard bill to push. Whenever we are taking on interest groups, particularly the oil industry, it's really hard to win.

AHEARN: Oregon Congressman Peter DeFazio has called for a hearing in the U.S. House of Representatives about oil train risks.