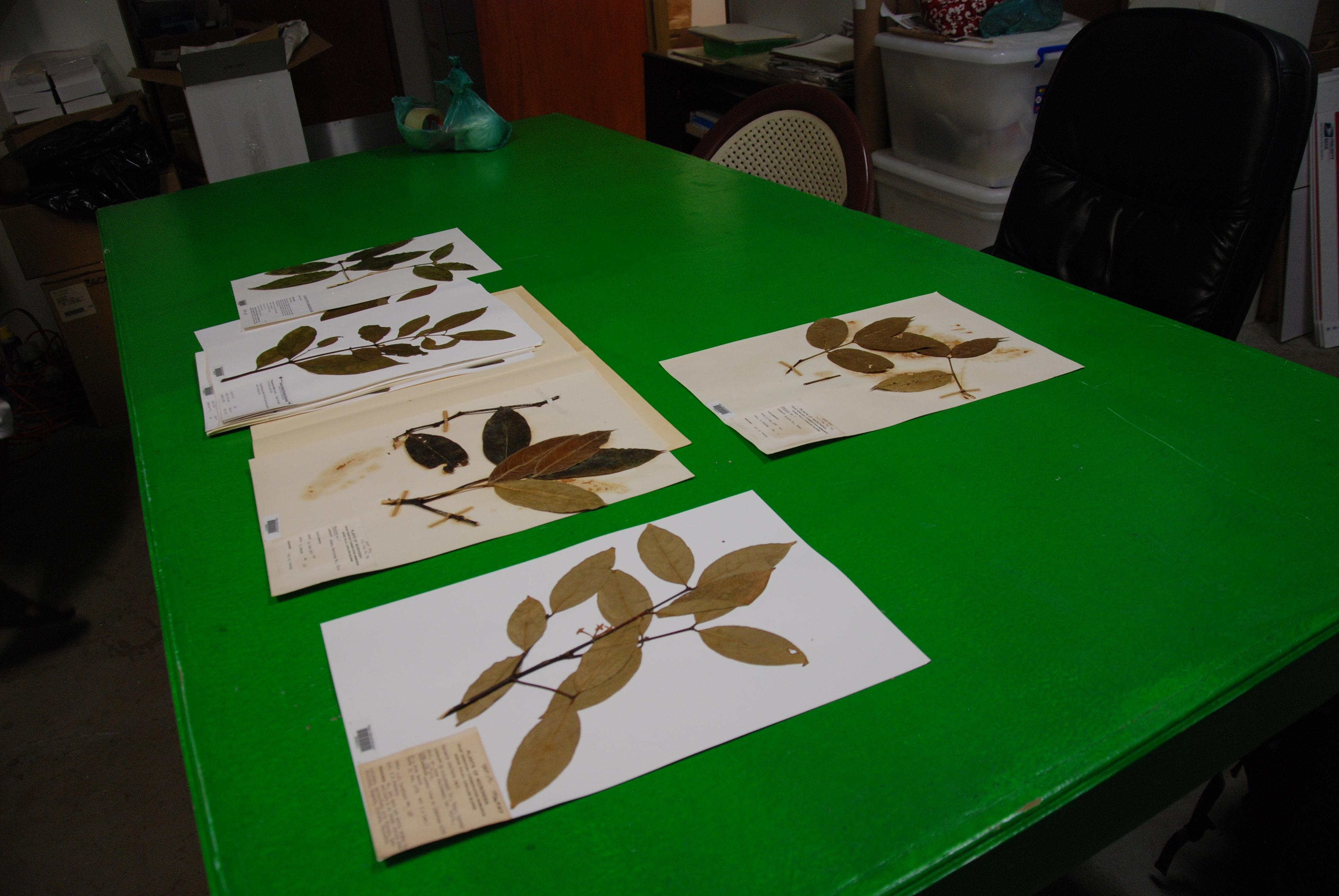 On the Pacific island of Palau, the modern world rubs shoulders with the traditional, and as the inhabitants eat a more Western diet, they often develop diabetes. But a traditional tree that grows there, known as the mother of medicine tree, promises a treatment, as Ari Daniel reports.

CURWOOD: Back to the tropics now, to the Pacific archipelago of Palau. Palau is renowned as a destination for diving and snorkeling round its many reefs and wrecks and its people depend on tourism, fishing and subsistence agriculture. But there's potentially a new and exciting development in Palau, and it could be an invaluable medical Godsend. Ari Daniel brings us this report.

DANIEL: This is a story of a dangerous collision between two worlds – in a particular place and inside a particular person. And how, after that collision, those two worlds might just rescue one another.
The place is Palau, a country in the western tropical Pacific, near the Philippines. It’s made up of over 700 little islands. And the person is Christopher Kitalong.
KITALONG: My father’s from Palau. And my mom’s from New Jersey.
DANIEL: Kitalong is athletic and easy to be around. He grew up primarily in Palau, the backdrop for some of his earliest memories.
KITALONG: Most of my free time was spent, like, feeling the mud between your toes while racing through the mangrove forests, or climbing 80-foot trees, and knowing which tree you were jumping on so you knew it wasn’t poisonous. 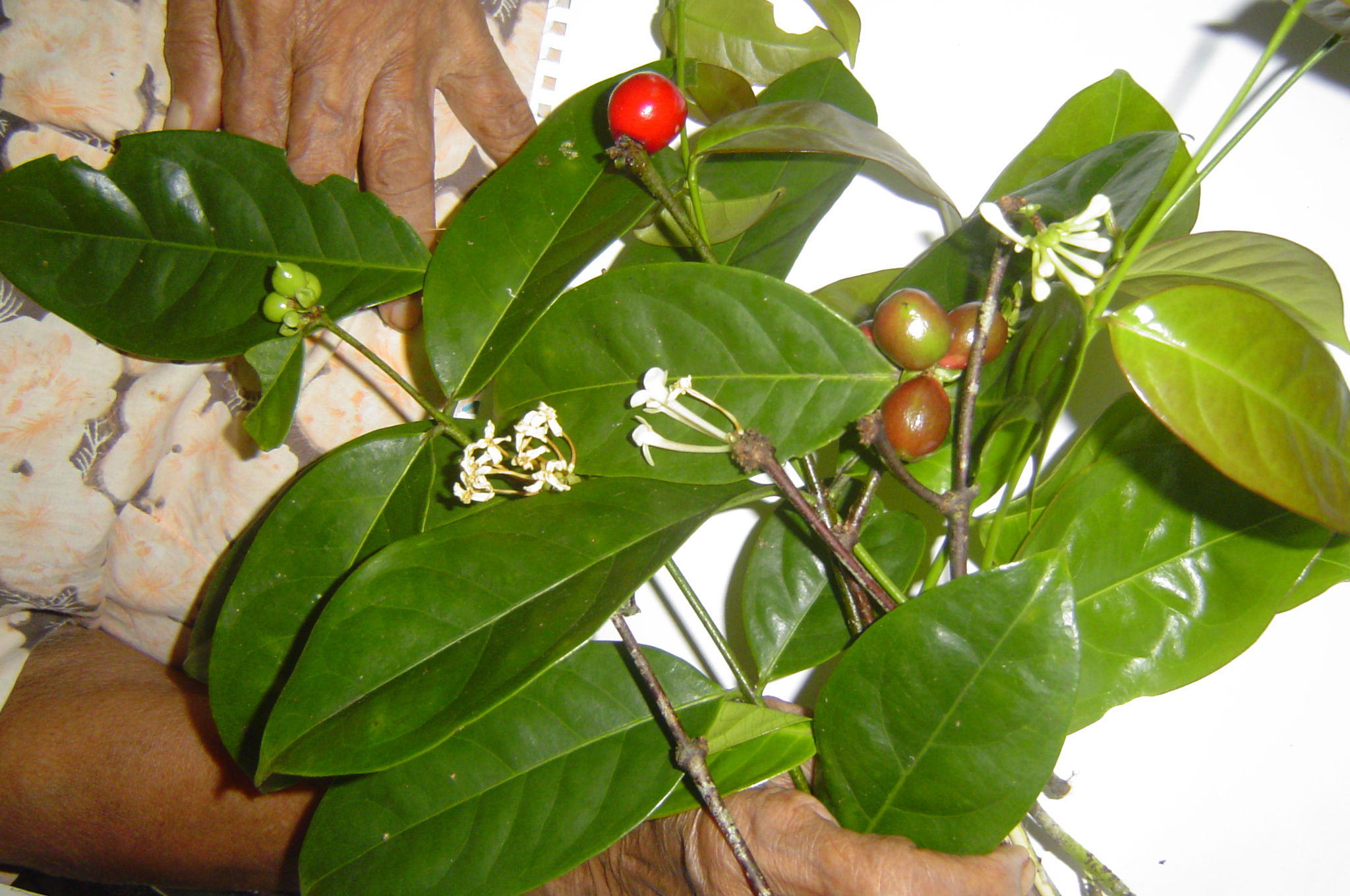 The fruits of the mother of medicine tree (photo: Christopher Kitalong)

DANIEL: It was Kitalong’s family that helped him discover the details of his natural surroundings.
KITALONG: My father, my grandmother, my uncles showed us, the beauty of what was around us.
DANIEL: This notion of honoring what the land has to give – in terms of food and shelter, it took root in Kitalong...and it’s become more and more important to him as he’s watched this tradition...erode.
KITALONG: It’s a very rapid change from when my father was born to when I was born. People don’t connect as much with nature, it’s become a metropolitan lifestyle. So we’re totally pushed towards this society where it doesn’t stress the value of our identity as people, and what is around us.
DANIEL: This is the concern that’s given Kitalong a mission – to help his fellow Palauans find a way to embrace modern life and their traditional culture at the same time.
It’s no easy task, but Kitalong has an unexpected partner at his side – a plant that goes by the scientific name Phaleria nisidai.
[CABINET OPENS]
KITALONG: We’re looking in the family Thymelaeaceae.
DANIEL: Kitalong pulls a few dried specimens out of a cabinet at the Palau National Museum, stems of elongated leaves glued to pieces of paper. The samples come from trees that are 8 to 10 feet tall – trees that have been planted everywhere in Palau.
KITALONG: It was in our yard.
DANIEL: And in the yards of Kitalong’s relatives, his neighbors and his friends. But nobody eats the plant. Nor is it particularly decorative. 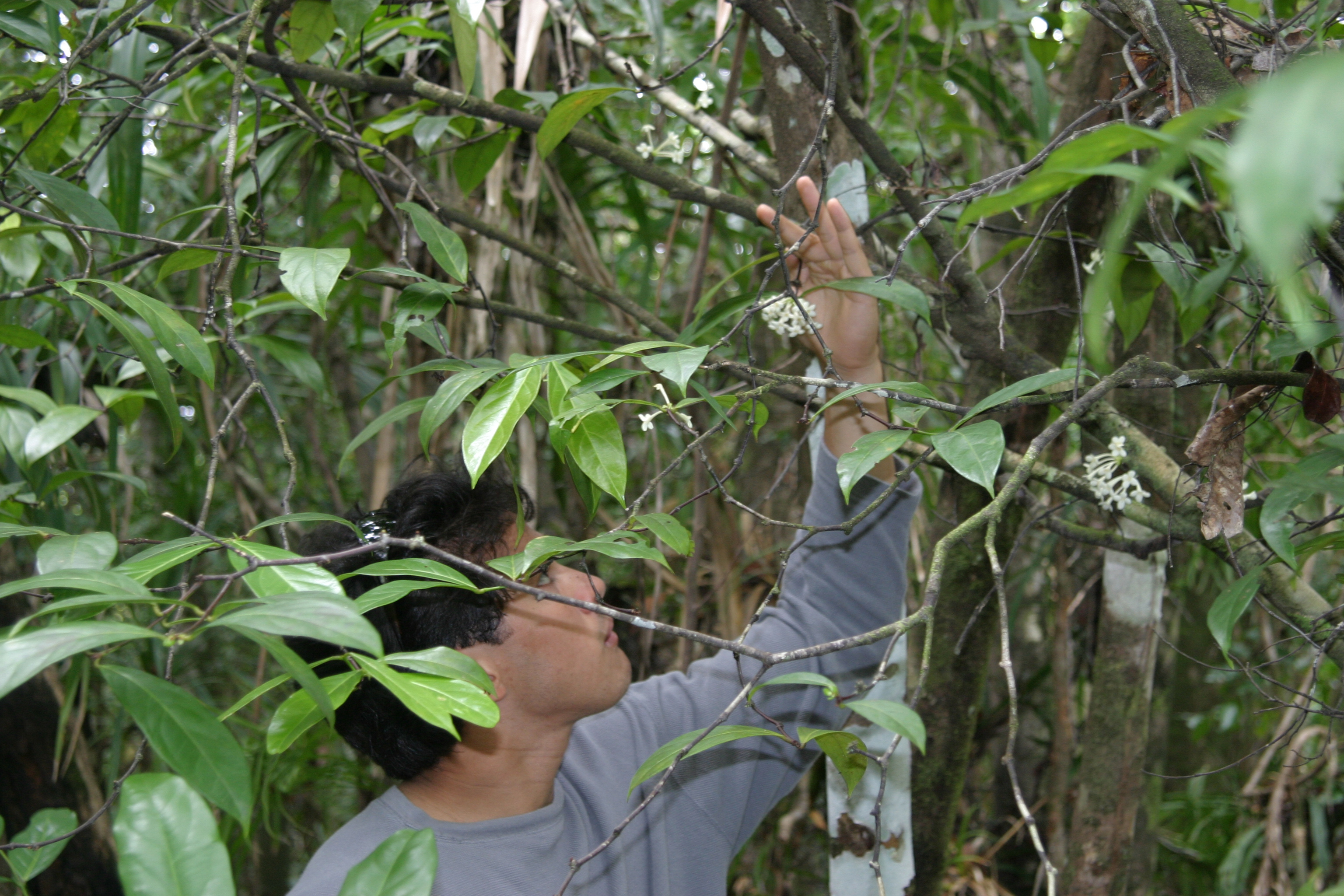 Inspecting the mother of medicine tree in the wild (photo: Christopher Kitalong

KITALONG: You couldn’t climb it either. So as a child, I was like, “Well, what’s the use of this tree?”
DANIEL: It turns out the answer to that question has to do with this plant’s local Palauan name:
KITALONG: Delal a kar. And that means “mother of medicine.” Just like the mother to a child, it took care of the Palauans.
DANIEL: Historically, delal a kar has been used as an energy booster and as the base in a variety of traditional medicines. Even now, as Palauans age, they often drink a tea made from the leaves of the plant. And Kitalong thinks delal a kar may continue to help his people, this time in the face of a modern medical foe – diabetes.
Two worlds – one being Palau and the other being the West, in the form of processed foods and a more sedentary lifestyle – have collided, and the result is a surge in diabetes in this part of the world.
KITALONG: It’s been declared a national emergency. So this is something that is an immediate threat to our lives.
DANIEL: There’s some preliminary evidence, though, that delal a kar – this mother of all medicines – may actually help fight diabetes. And Kitalong, who’s a PhD student at CUNY and the New York Botanical Garden, is currently organizing a clinical trial – a double blind, placebo-controlled Western clinical trial – in Palau to test it.
BALICK: Chris’s work is really path breaking in Palau.
DANIEL: This is Kitalong’s PhD advisor – Michael Balick, an ethnobotanist at the New York Botanical Garden. And he says that by demonstrating the medical importance of a plant like delal a kar, Kitalong is helping rebuild respect among Palauans for their environment.
BALICK: Going back to ancient ways – knowing in this forest what you can eat, how you can heal your wounds – gives a culture a greater sense of self-reliance and pride. And that is the antecedent to conservation.
DANIEL: Christopher Kitalong still has to run his clinical trial. And it’s not clear how responsive Palauans will be to his case of fusing old and new. But when I was in Palau, I saw Kitalong not just in the lab, but out in the community too. He relates easily to people. He speaks two languages – the language of western science and the language of traditional remedy. And he’s using his bilingual ability to reconnect Palauans with their roots.
KITALONG: You know, maybe, maybe taking a step back is the best way to move forward in health, and happiness...by promoting the fact that traditional remedies in Palau are valid. And that our culture and our knowledge from before is important to preserve.
DANIEL: Kitalong is a product of the same two worlds that have collided on Palau. He’s found a way to merge them inside himself, and he’s hoping he can help this tiny island nation do the same.
I’m Ari Daniel.
CURWOOD: Our story on the mother of medicine tree is part of the series, One Species at a Time, produced by Atlantic Public Media, with help from the Encyclopedia of Life.


Check out more of Ari Daniel’s stories at his website