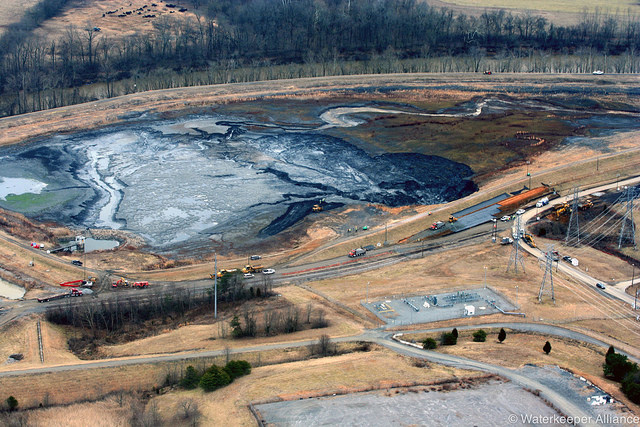 Huge Coal ash waste ponds are commonplace at power plants in Appalachian coal country, but environmental watchdogs say state and federal oversight is poor and lax. A recent spill on the Dan River in North Carolina dumped thousands of tons of toxic coal ash into a river. Amy Adams of Appalachian Voices discusses her call for reform better with Steve Curwood.

CURWOOD: From the Jennifer and Ted Stanley Studios in Boston, this is Living on Earth.
I’m Steve Curwood. Fresh water has been in for some hard times recently in the US. Not long ago a toxic chemical leaked into the Elk River in West Virginia, fouling the drinking water for hundreds of thousands of people. Then on February 11, about 100,000 gallons of coal slurry blackened miles of West Virginia's Kanawha River. Meanwhile in North Carolina, a storm water pipe under a containment pond at a Duke Energy power plant broke, dumping over 80,000 tons of toxic coal ash into the Dan River. That pipe's now blocked, but questions remain about the safety and regulation of coal ash ponds. Joining us now is Amy Adams, an activist with Appalachian Voices. Welcome to Living on Earth, Amy.

ADAMS: Thank you very much for having me.

ADAMS: Coal ash is full of many toxic metals, including arsenic, selenium, boron, lead and mercury, and so anytime these pollutants get into your groundwater or your surface water, you’re potentially contaminating your drinking water and the swimability and fishability of those public resources. 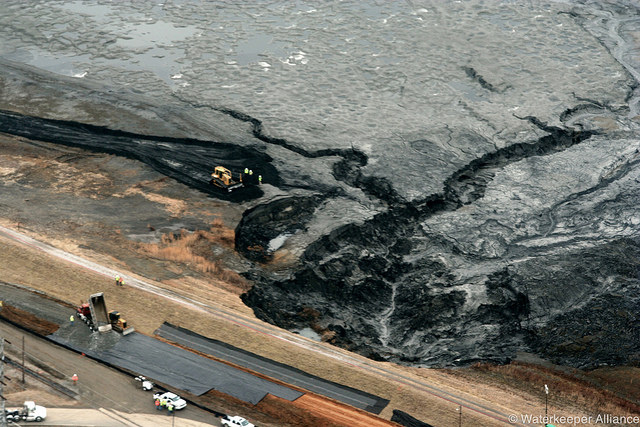 CURWOOD: Now, how surprised are you that there was this massive spill. I think it’s over 80,000 tons of coal ash from the Duke Energy facility.

ADAMS: Environmental groups from the beginning have been stating that these coal ash ponds are an inherent risk because they’re located along major waterways, and they’re storing ash in unlined holes in the ground they call ponds; like the Kingston spill in Tennessee in 2008, this is the outward visible spill that the public’s eyes can see, and they can readily recognize. What’s much more insidious about these ponds is that every one that sits there that doesn’t have an open spill is still contaminating the ground water.

CURWOOD: Just how many coal ash ponds are there in North Carolina, and what’s their condition? 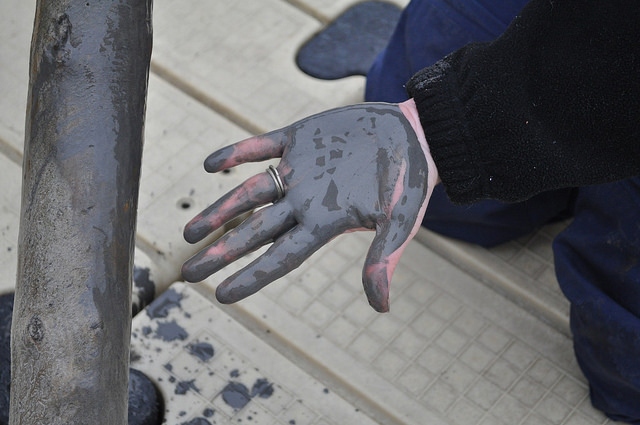 ADAMS: There are 30 some ponds at 14 different plants, and they are all outdated, antiquated ponds that most of them were built between the ’50s and the ’60s. Those earthen dams were only meant to have a lifetime of about 50 years. So, basically, every one of these ponds is a ticking time bomb for a big break like this. But, going back, saying again that every day these things contaminate ground water even if they sit without a break or without a leak, this is one of the reasons the environmental groups have been working so hard, to try and have Duke Energy remove the coal ash from these ponds and store them in more appropriate lined landfills away from our surface waters.

CURWOOD: Now, the government in North Carolina is supposed to regulate health and safety for things like coal ash ponds. What’s their record on this?

ADAMS: Unfortunately, when Pat McCrory took office in 2013, he appointed a secretary called John Skvarla to the Department of Natural Resources... 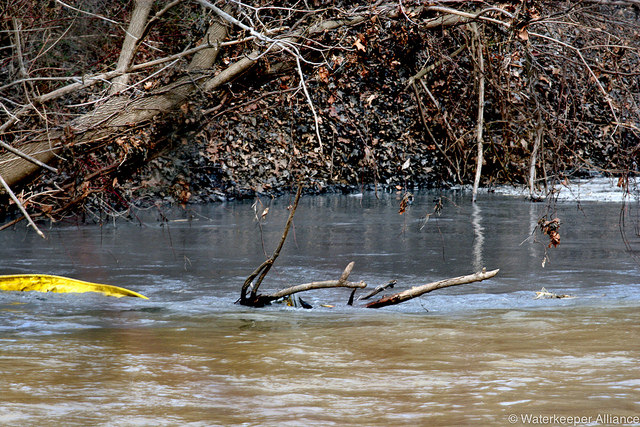 CURWOOD: Let me just interrupt you there; Pat McCrory is the governor.

ADAMS: He is the governor, and he is also a 28-year employee of Duke...

ADAMS: Duke Energy. Yes, Sir. And so when Pat McCrory and John Skvarla became the new lead administrators of the state environmental agency, one of the first things that Skvarla did was redefine the agency’s “customer”, and we’re no longer viewing the public and public’s resources as our customer, and the customer is now defined as the industries which we regulate. That in itself means that we’re pushing away from protection to assistance of industries, which is not the role of a state agency.

CURWOOD: Now as I understand it, you worked for a good while for North Carolina’s environmental agency. Why did you leave?

ADAMS: I was nine years with the state environmental agency, and it was the change in the focus. I went into environmental protection because I loved the state of North Carolina and its citizens, and I wanted to be able to protect the resources so that the citizens’ rights to clean air and clean water were protected. I could not in good faith continue to work where I was being asked to protect industry instead of protect the public and the resources that I loved.

CURWOOD: What federal regulations, if any, affect the coal ash ponds? 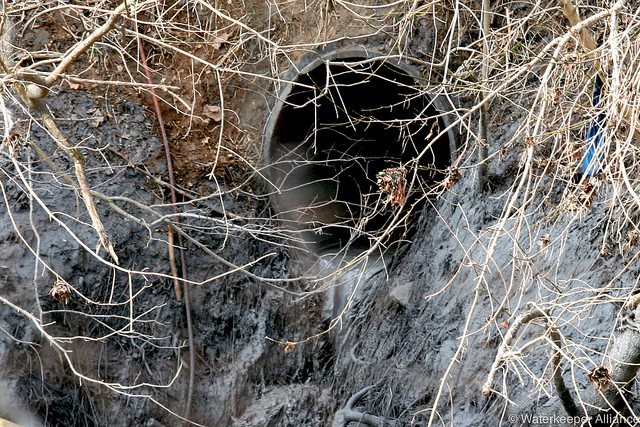 ADAMS: That’s another thing environmental groups have been working very hard on, and it actually also took a lawsuit against the EPA to push them to issue regulations. After the coal ash spill in 2008, the EPA made the promise that it would enact strong federal regulations on coal ash. Here we are in 2014, we’ve had multiple spills, we’ve had more groundwater exceedances, and we still have not received any federal guidance or rules from the federal government, from the EPA. So we are still awaiting EPA’s decision on how to regulate not only the storage of coal ash, but also effluent or the discharge that come from these coal ashes.

CURWOOD: Now how many people live near these coal ash ponds or in the watershed of where you’re concerned there are releases of toxic materials?

ADAMS: Well, I’ve said there are 14 sites across North Carolina. There are over 100 sites across the southeast. There’s hundreds of communities, thousands of people throughout the southeast and the United States that are in danger of health concerns just from living near a coal ash pond. The EPA put out a report a couple of years ago that said if you live within three miles of a coal ash pond, you have a one in 50 chance of getting some form of cancer, which is above the EPAs own health standards.

ADAMS: It’s not a matter of if the next coal ash failure will occur, it’s when. And so there is one surefire way to solve all of this, and that is to dig up the coal ash ponds and move the ash to lined landfills away from our surface waters. It’s the only guarantee we have that they will no longer contaminate our ground and surface waters.

CURWOOD: And how much will that cost?

ADAMS: It only actually costs a fraction of what the industries say that it does, and one of the supporting facts for that is that in South Carolina, both Santee Cooper and S.C. Energy have agreed to remove all of the coal ash from unlined ponds adjacent to surface waters in South Carolina. So if two of the three largest utilities can do it, certainly Duke who is one of the most profitable utility companies in the nation has the resources to do the same as its smaller partners in South Carolina.

CURWOOD: Well, I want to thank you for taking the time with us today. Amy Adams is the North Carolina Campaign Coordinator for the environmental group, Appalachian Voices.

CURWOOD: We called Duke Energy. Spokesperson Lisa Hoffman told us Duke has yet to make a final decision about relocating coal ash into lined ponds, but assured us the company constantly monitors water quality near its operations.