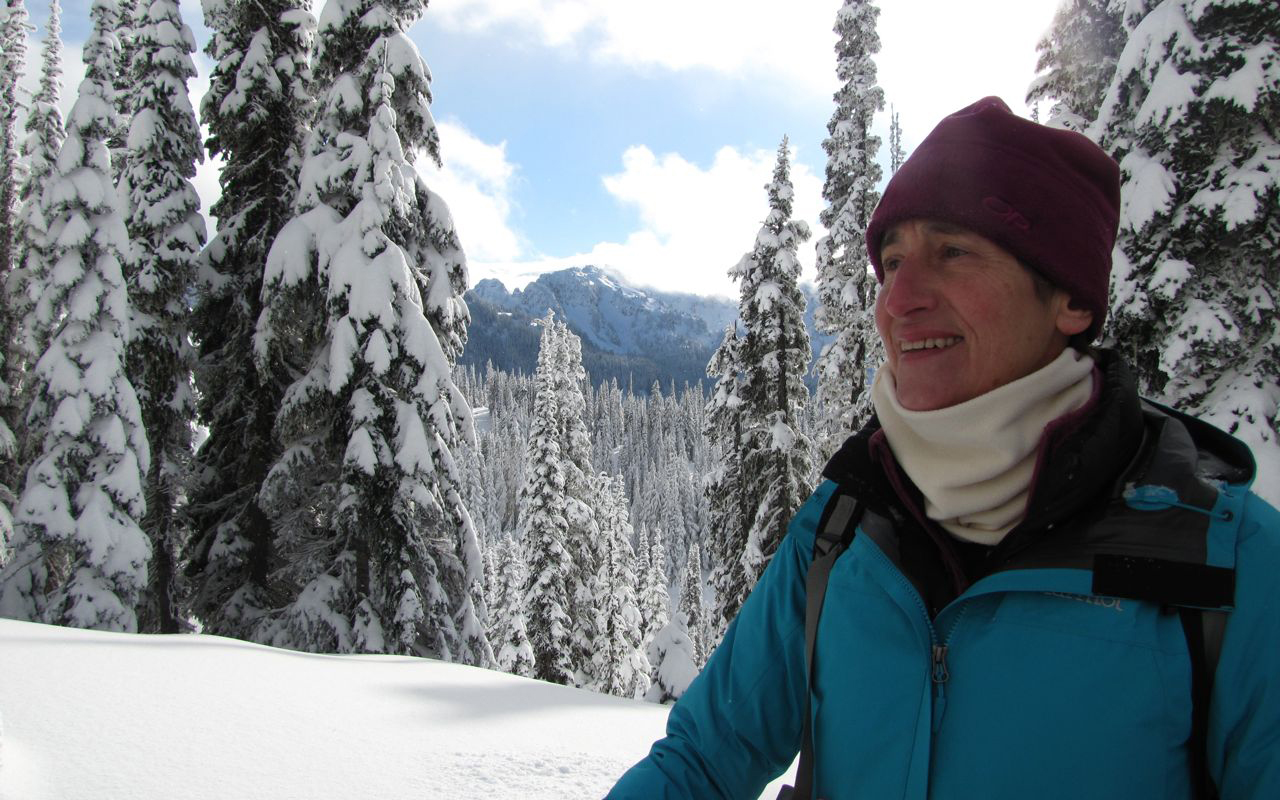 As Interior Secretary, Sally Jewell has a tough job. She needs to both protect and preserve the US natural heritage, and advise on granting mining leases on federal lands. The Secretary talks shop with EarthFix’s Ashley Ahearn as they trek up a snowy peak in the Pacific Northwest on snowshoes.

CURWOOD: Sally Jewell, one-time CEO of outdoor gear company REI, is now Interior Secretary, and she will undoubtedly be part of any discussions of new National Monuments. She’s not talking about those options publicly, but she has been meeting with government scientists to discuss the impacts of climate change and visiting some of our protected lands, including Mount Rainier National Park. And while she was there she did some snowshoeing with Ashley Ahearn, of the public media collaborative EarthFix.

JEWELL: Alright Ashley, retire the microphone, it's time to suit up.

AHEARN: So how many times have you done this hike, Secretary?

Secretary of the Interior Sally Jewell listens as Paul Kennard of the National Park Service, talks about the Nisqually floods of 2006. (Photo: Ashley Ahearn, EarthFix)

JEWELL: This particular hike? I don't think I've ever done this hike, at least not on snowshoes.

AHEARN: You come up here and go straight to the top.

JEWELL: Well I've done that a few times. I've wandered all around here with my kids. It's so different in the wintertime.

AHEARN: What's the hardest part of your job?

JEWELL: You know Ashley there were times when I thought running REI was difficult. It was so easy compared to this job.

JEWELL: The fact that every decision we make is a conflict of some sort. You're going to make somebody mad, maybe somebody happy. You have to pay attention to the facts and just do the best job you can with the best science available and it's complicated. I mean, Indian tribes, water, Fish and Wildlife, energy development, obviously national parks at a time when budgets are tight. Everything at a time when budgets are tight is just making a lot of really difficult choices.
And we're dealing with a very large board of directors, 535 members.

AHEARN: That don't agree on much.

JEWELL: It's just more complicated than a 12-member board of directors. I think I’ll stop there. In the federal government you're not always rewarded for taking risks. In fact, it's about the opposite from the private sector. So sometimes people take risks and they get accused of wasting money but what I've seen here is good creativity that's trying to make these landscapes more resilient in the face of increasing challenges and it's places like this that help us understand what's happening in the ecosystems because you do have long term science and long term monitoring and people that are out here that are paying attention to even small changes in the ecosystem and the habitat.

AHEARN: It's interesting just within your department the world forces around climate change are almost being wrestled out. The Department of the Interior issues the leases to mine coal and other fossil fuels that are the root, a big part of the problem if you ask the climate scientists in terms of contributions to global greenhouse gas emissions. We're here looking at the symptoms today and you're issuing the permits for the cause at DOI. What do you think about the connection there?

JEWELL: Well the President has made clear that you can't switch from a fossil fuel based economy to a renewable energy based economy over night but we can all conserve starting now and many people are conserving and we have been supporting grants for example, in water conservation and so on. We've also been issuing permits for renewable energy projects on public lands but you can't just snap your fingers and go out of a fossil fuel economy over night so it is understanding that but also standing up other forms of energy.

AHEARN: Everyone that's worrying about climate change is asking for a price on carbon. Is that a pipe dream at this point from what you're hearing in Washington, DC?

JEWELL: I think if the public believes that a price on carbon is a way to address climate change then they should be making that clear to their elected officials. This is the sort of thing that's done by Congress. It's not a thing that can be done through the executive branch so if people feel strongly about that they should make their voices heard with their elected leaders.

AHEARN: What does the President say to you when you get to talk to him about this stuff. What's he like, what's going through his head on this stuff?

JEWELL: The President is very committed to making a difference in his administration and climate change is one area where we really have to look to the future and look to the kind of planet we're leaving to our kids and our grand children. He has been quite forceful in his climate action speech and again in the State of the Union and in meetings that he's had with members of his cabinet, including me, wanting to know what we hear about from the scientists that we have out on the ground, what can be done, how can he be helpful to us, and he's looking for answers from people like the people we've met here on Mount Rainier, who've got great answers, who have been working on developing a more resilient infrastructure, who have been paying attention to what's been happening on the resources and the President is asking us to channel those great energies up through him so that he can help use his executive powers, where they’re appropriate, to make a difference.