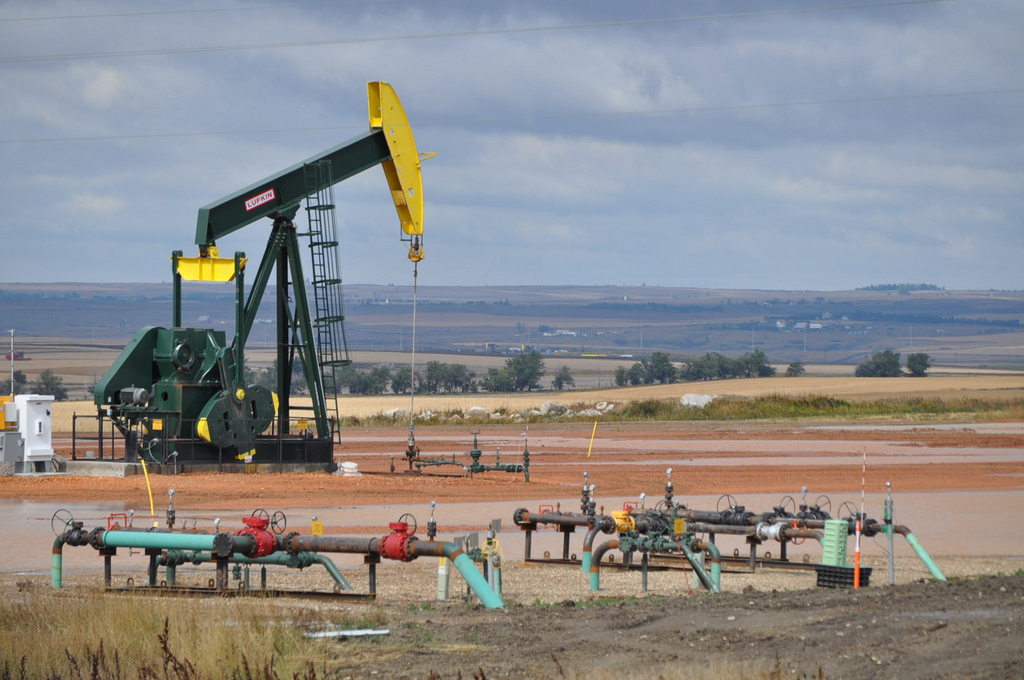 North Dakota is now the most dangerous state in the US for worker safety. Journalist Tim McDonnell tells host Steve Curwood that a dramatic rise in workplace deaths since 2007 has coincided with the Bakken Shale’s boom in oil and gas drilling and fracking.

CURWOOD: In just a few short years North Dakota has surged to become the second largest producer of oil in the US after Texas. People are flocking to the Bakken Shale region for high-paying jobs in the oil boom. Truck drivers can earn as much as $90,000 a year, but that prosperity comes at a price. North Dakota now has the highest rate of workplace fatalities in the US. Tim McDonnell of ClimateDesk.org says there is a direct connection between the oil boom and the epidemic of workplace deaths.

MCDONNELL: So if you go back to 2007 in North Dakota they were producing just a little bit under five million barrels per month. Now, as of February ’14, it was just under 30 million barrels per month. So it’s gone up several times, and really it’s right around 2009, 2010, is when you really start seeing that big uptick. That was the beginning of the boom in North Dakota really. And that’s really the same year right around 2010 when you start to see this uptick in workplace injuries and fatalities. 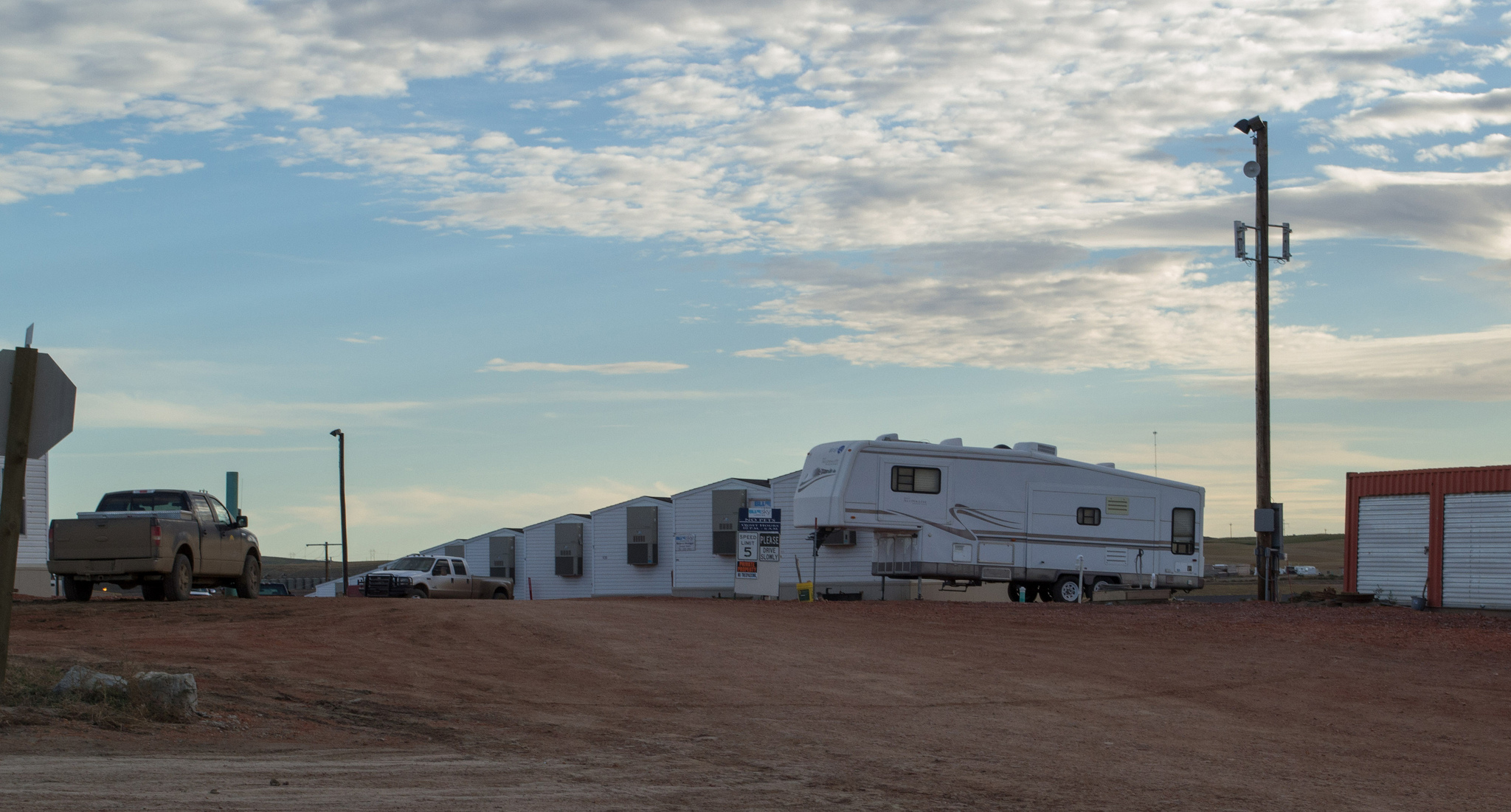 CURWOOD: So, just how dangerous is it to work in North Dakota?

MCDONNELL: So what’s reported in this new compilation of federal data that’s just been put out by the AFL-CIO is 2012 statistics that are new, the rate was just over 17 deaths per 100,000 workers, which is by far the highest out of any other state. The national average is just over three. And what’s particularly interesting about North Dakota is not just how high the number is, but how quickly it’s come up to be that number. It’s more than doubled from where it was in 2007, so just in the last five years it’s been on this incredible uptick. 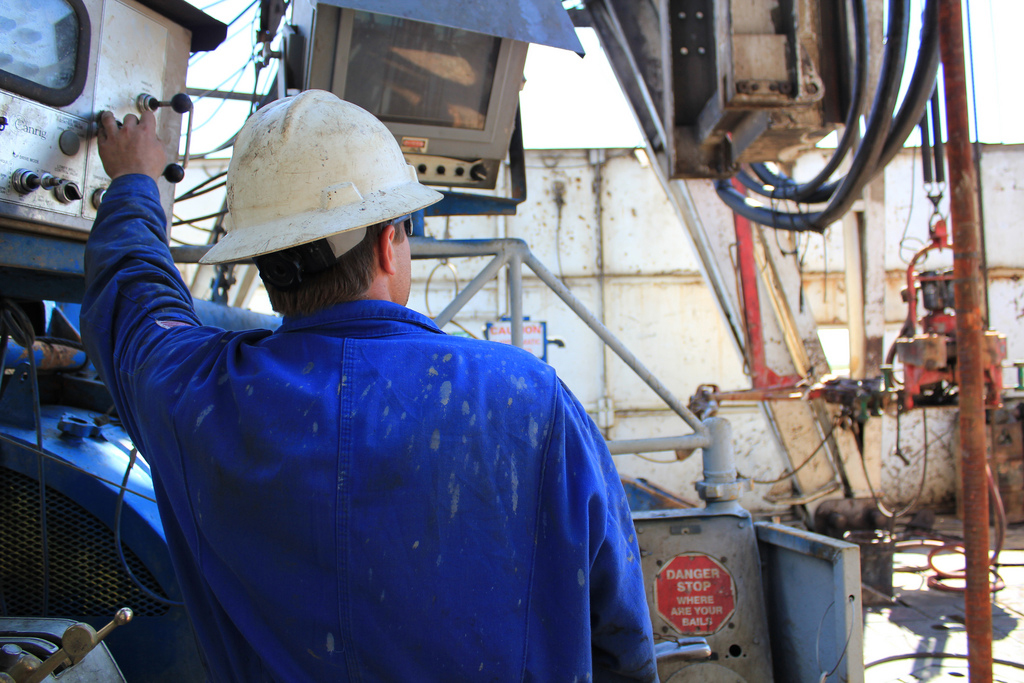 An oilrig worker on the job. (Lindsey Gira)

CURWOOD: Tim, where specifically in the workplace are these fatalities happening?

MCDONNELL: Most of these deaths are taking place in transport-related activities. This could be related to any number of different industries, but that’s this sort of activity that people tend to be doing. Now, as far as which industries tend to be the most accident-prone, construction and mining, which includes oil and gas extraction, those are the two big ones.

CURWOOD: Now, transportation, that seems a bit surprising. Why is it so dangerous to drive in North Dakota?

MCDONNELL: So one reason for that is really just the pace, the sheer speed at which this boom is taking place. There’s huge amount of truck traffic, thousands and thousands of trucks that are bringing in water and chemicals and sand for the fracking operations, and then bringing out oil which is all mostly done by trucks. Also, these are on poorly maintained or brand new roads, and you have drivers working in trucks who have to work long 12-hour shifts on poor quality roads, and there’s kind of no incentive to stop working.

CURWOOD: Now, this oil and gas boom is relatively new to North Dakota. How well trained are the people who are working there?

MCDONNELL: Yeah, what’s interesting here is that there’s so many job openings, and many of them pay quite well, that you have people coming from all over the country to take these things, and in a lot of cases, they’re coming into the industry for the first time. And so, compared to a place with an established industry like Texas or Alaska, you have a lot of people coming in who are quite inexperienced. They’re not trained, and then you combine that with the fact that you have a lot of companies that are growing quite quickly who don’t have the resources or their own experience to be able to train people, so it’s kind of this combination of those things that can contribute to making this kind of unsafe atmosphere.

CURWOOD: How much of the death rate do you think is attributable to the frontier mentality that’s there...it’s a macho thing...gotta go for that gold right now?

MCDONNELL: I think that’s absolutely a big part of it, and I’ve heard that from people that I’ve spoken to over there. I mean, it has the feel of a gold rush, you know, the Klondike, Alaska, or California gold rush, it’s very much that same type of attitude that most of the people who are working there taking these jobs are men, they’re away from their families, you’re living in a camp with 100 other guys, so there is very much a macho attitude. Nobody wants to admit that they are exhausted or that even that they have injured themselves and don’t want to report it because they don’t want that to reflect poorly on them or their company.

CURWOOD: Now the data for these workplace safety records comes from the union group AFL-CIO, and according to their research, the states with the most workplace deaths are: North Dakota, Wyoming, Alaska, Montana, and West Virginia. And I notice that all of these states have a lot of extractive industries. Coincidence?

MCDONNELL: I think it’s probably safe to say it’s not a coincidence. If you look kind of broadly across all states, you find that mining, which includes coal mining like you said in West Virginia, it also includes oil and gas drilling, is the second highest number of fatalities, or the second highest rate of fatalities for all industries. Actually, agriculture and forestry tend to be higher. I think people working with farming equipment is also quite dangerous. So I think the data is quite clear between workplace safety and states that have a large robust oil industry. It’s obviously, relative to other industries, is quite a dangerous one to be in.

CURWOOD: So, if a worker is five times more likely to die in North Dakota than in the rest of America, what should be done to make North Dakota safer for workers?

MCDONNELL: Every time I ask this question, whether it’s to someone at the AFL-CIO or truck drivers themselves in North Dakota that I’ve spoken to, everyone basically agrees that the main thing here is that it’s all just happening too fast. People need to slow down, and you need to have protections in place so that truck drivers, for example, which clearly is one of the most dangerous things you can be doing out there, are working shorter shifts, making sure they have a place to stay so they can get a good night’s rest and be refreshed and ready to go back on the job the next day, and not driving when they’re exhausted and tired. It’s almost kind of basic stuff like that, but when you have a boom kind of context like in North Dakota, I think those are the things that get glossed over quite easily and could be kind of the easiest types of things to do to make the place a lot safety.

CURWOOD: Tim McDonnell is an Associate Producer at ClimateDesk.org. Thanks so much for taking the time, Tim.

MCDONNELL: Thanks very much, Steve, appreciate it.