The Wetland that Saved Highway 101 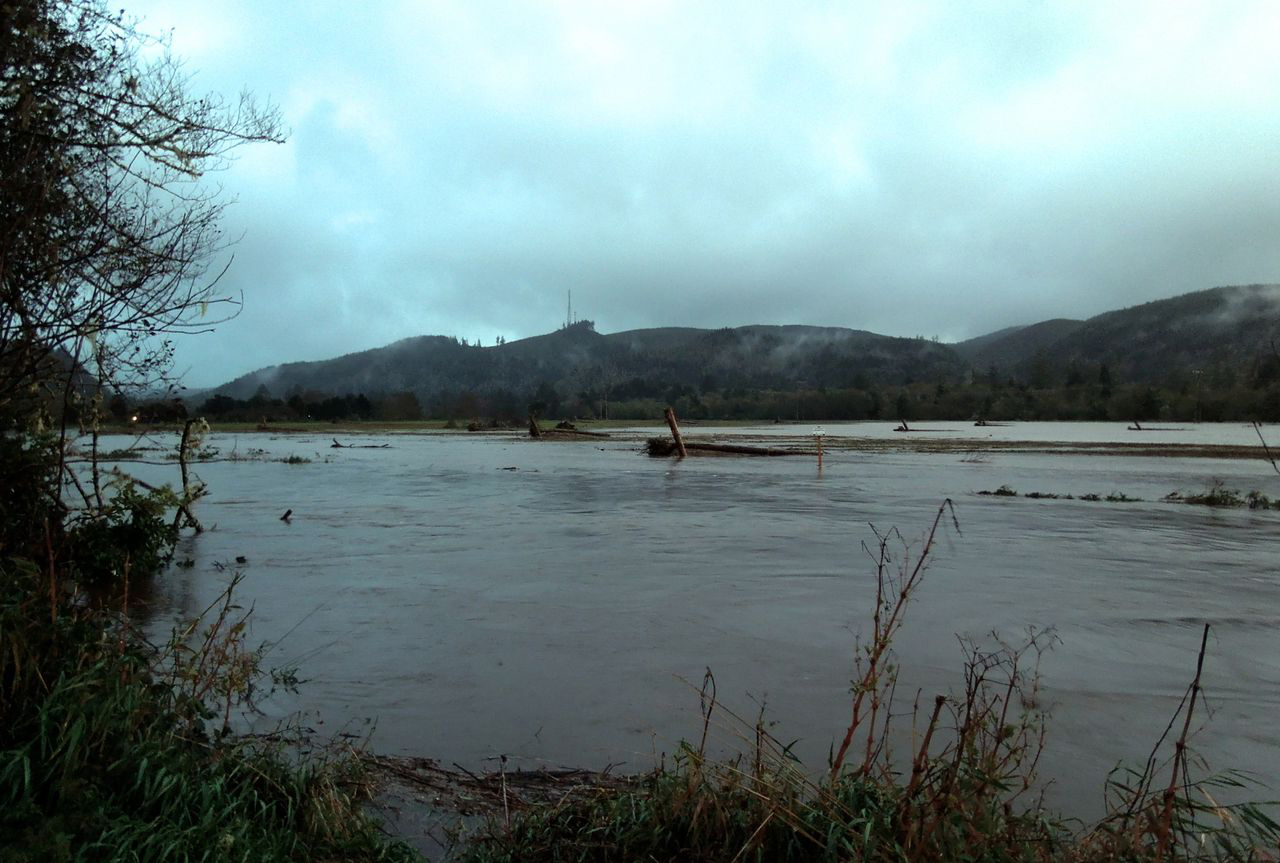 Every winter on Oregon’s north coast heavy rains cause the Necanicum River to flood part of Highway 101. But as Earthfix reporter Cassandra Profita explains, a local land conservancy has restored a field to a wetland to keep the highway dry.

CURWOOD: The Balkans aren't the only part of Europe that's been drowned under unprecedented rains. Earlier this year record floods in parts of the UK inundated villages and farmland for weeks. The atmosphere can hold more water vapor as it warms, and what goes up, must eventually come down, often in the form of torrential rains that don't let up. Climate change is changing the business of flood control.

In Holland, where masterful engineering has protected low-lying land for centuries, planners are now looking to give some areas back to the sea. And the idea seems to be catching on in places in the US. On Oregon's north coast, there’s an infamous stretch of Highway 101 where every winter, during heavy rains, the Necanicum River spills out over its banks and swallows the road just south of Seaside. This happens at least once and up to seven times a year. But this year, as Cassandra Profita of the public radio collaborative EarthFix explains, highway officials have teamed up with a local landowner to use a nearby wetland as a natural sponge for floodwater. 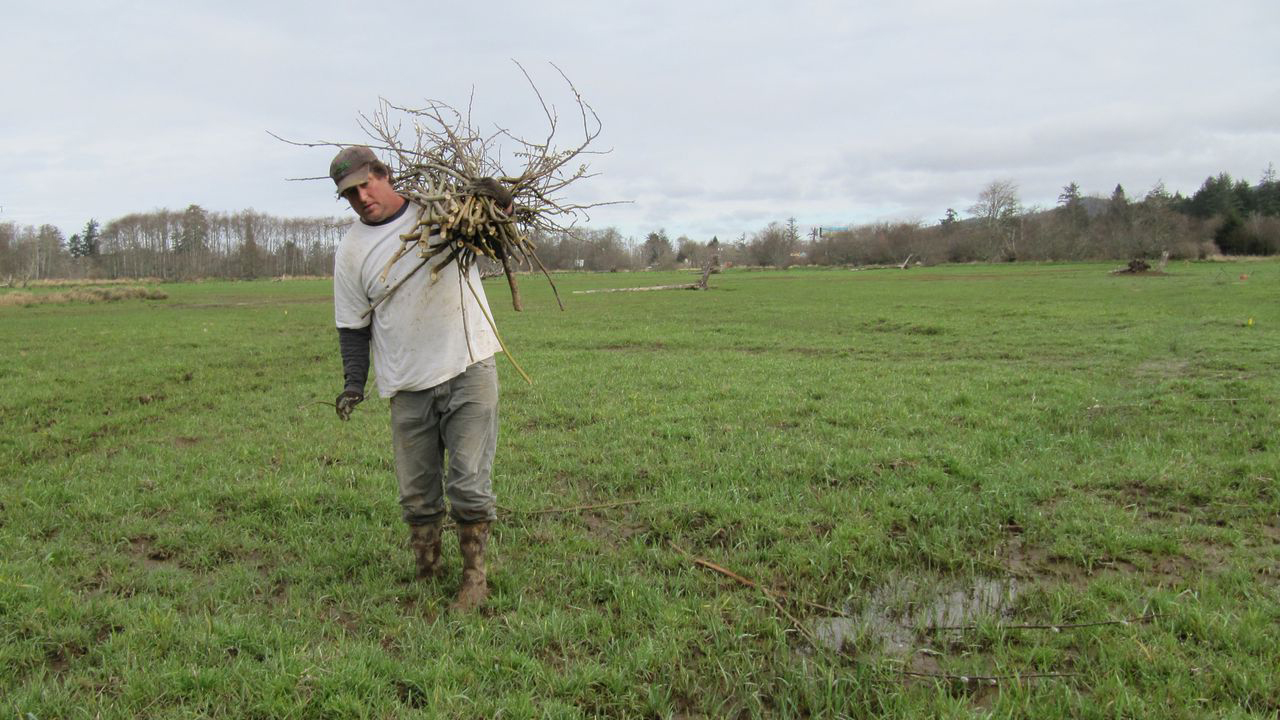 [VOICE ON VIDEO: “HERE WE GO, THROUGH THE WATER!”]

PROFITA: You can see the extent of the Highway 101 flooding in YouTube videos made by people driving through it. In this one, the car radio plays a local commercial while a woman in the front passenger seat films the view from the dashboard. It’s all water.

PROFITA: At one point, she turns the camera to the right. The water level is almost as high as the passenger window.

PROFITA: Larry McKinley is the regional manager for the Oregon Department of Transportation. He says sometimes crossing the lake is actually too dangerous. His agency is in charge of closing the highway to cars that aren't big enough to make it across. Otherwise, they could float away when flood waters reach a foot or higher. 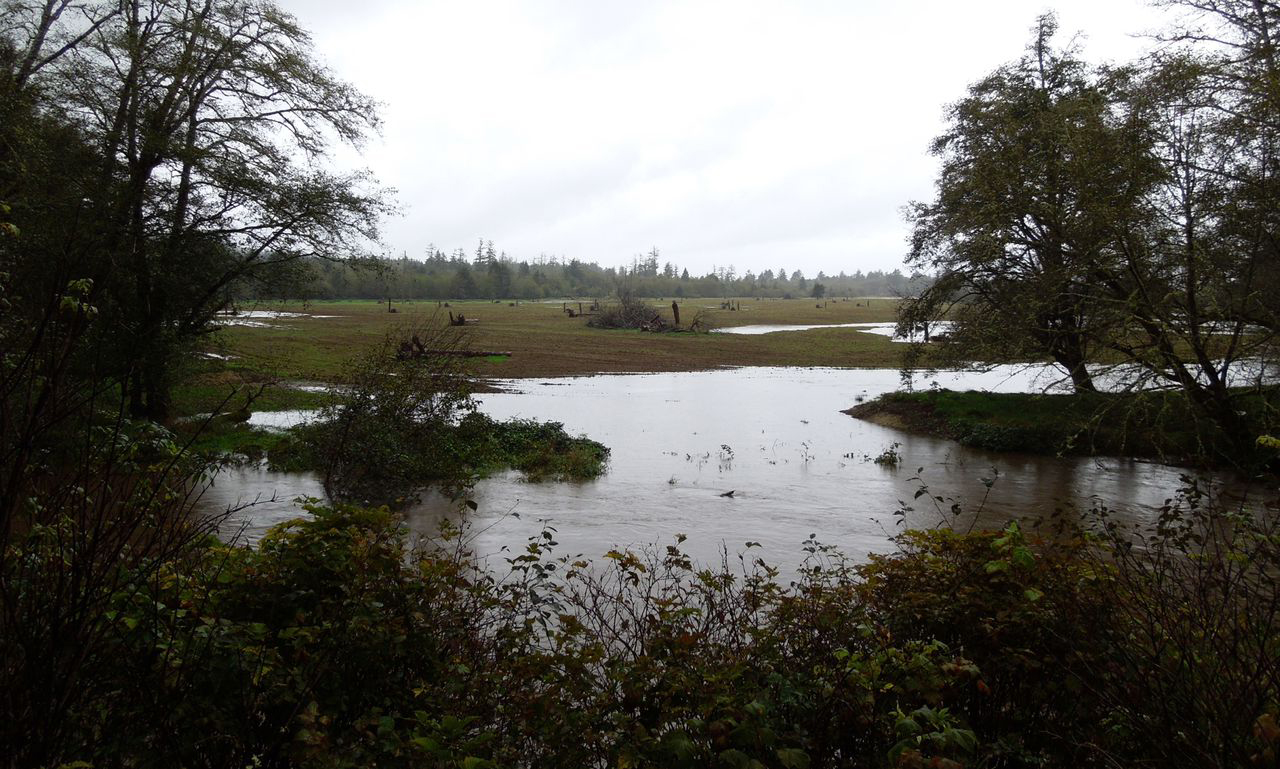 MCKINLEY: When you get that flowing water – and it would move very quickly across there – it would actually pick them up off their wheels and they’d start moving onto the other side. And there’s a very deep ditch on the other side.

PROFITA: Studies identified two culprits for the flooding problem. One: the highway was built in the Necanicum River floodplain. And two: the rest of the floodplain was walled off by a berm – a four-foot mound of dirt that trapped the river against the highway for about a mile.

Engineers presented three solutions. Two of them involved raising the highway above the floodwater. The third, much cheaper option, was to remove the berm and let the flood water spread out over 100 acres of pasture land on the other side. 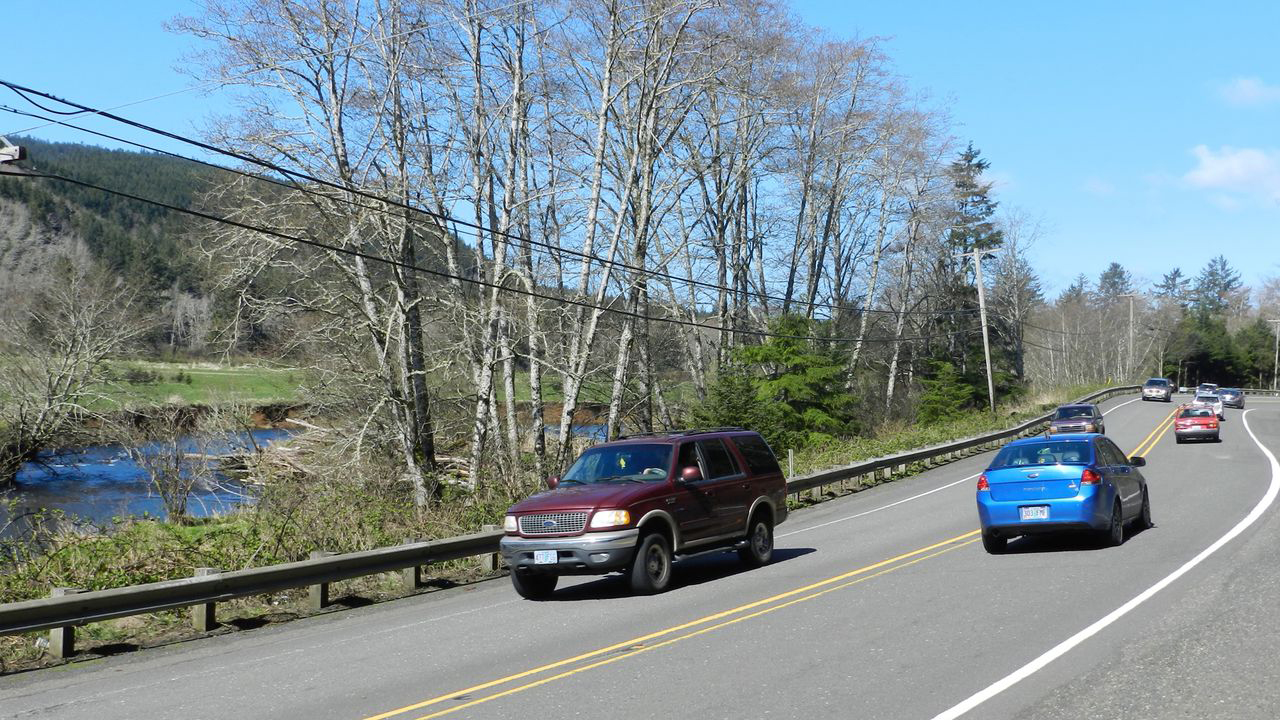 The best part of that plan? The owner of the pasture actually wanted it to flood.

VOELKE: We said bring it on. We’ll take as many flood waters as you want to give us.

PROFITA: That’s Katie Voelke. She’s the director of the North Coast Land Conservancy. The group manages 3,000 acres of habitat in the region – including 300 acres along Highway 101. Turns out, she was dying to turn that pasture back into what it used to be.

PROFITA: As transportation officials weighed their options for fixing the highway, she assured them that, yes, really, they could – and should – flood her property.

VOELKE: I was like, ‘Don’t be afraid. I know you never do this, but we want you to.'

PROFITA: For Voelke, floodwater is like a habitat delivery service. It carries nutrients that feed native plants and nurture the base of the food chain.

VOELKE: It's like augmenting the soils. Bringing the compost to the garden.

PROFITA: To turn a cow pasture back into a natural wetland, Voelke says, her land needs those nutrients. But taking out a mile-long berm was too big a job for her land trust. A plan snapped into place when ODOT realized it could use Voelke’s flooded property as a wetland mitigation bank. That’s a place where the agency gets credit for restoring wetland habitat. Later, it can cash in that credit to offset damage to wetlands from roadwork in the area. 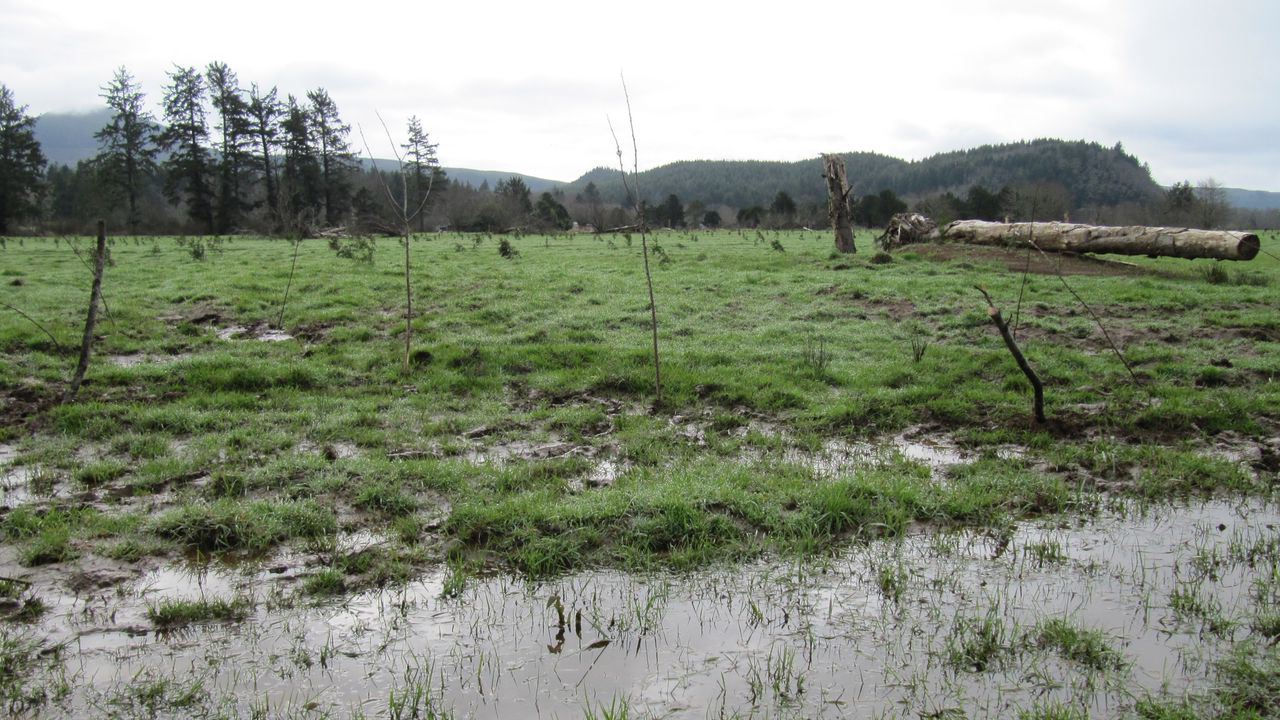 McKinley says one day he got a call from one of ODOT's wetland mitigation specialists.

MCKINLEY: They had money to do wetland mitigation banking. At that point the light went on. I said, 'We've got a site out here.'

PROFITA: So, last summer, ODOT paid to remove almost a mile of berm along the highway and start turning the pasture into a wetland. And this winter, everyone’s been watching to see whether the river’s floodwater would now flow into the pasture instead of covering the highway.

MCKINLEY: This year we’ve had two flood events. The last one, in February, was a very major high water event, and in the area of Circle Creek Campground where it’s always flooded before, it didn’t flood this time.

PROFITA: Voelke compares the solution with allowing the river to fill a bathtub instead of a sink during high water.

VOELKE: So, it’s the same amount of water, the same power, but you have a bigger bathtub. That’s what our floodplain is.

PROFITA: Mike Morgan is the mayor of Cannon Beach, the next town south of Seaside on the coast. During heavy rains in February, he drove up and watched as the pasture flooded while the highway stayed dry. He says for him it drives home the idea that people could let nature handle flood control more often.

MORGAN: I think the lesson in the long run for engineers who like to bury pipes and install pumps is that natural engineering really works.

PROFITA: As part of the project, workers have planted thousands of trees in the pasture this spring. When they grow up, Voelke says, they’ll make the wetland even more valuable to highway drivers through what she calls vertical water storage. I’m Cassandra Profita reporting.