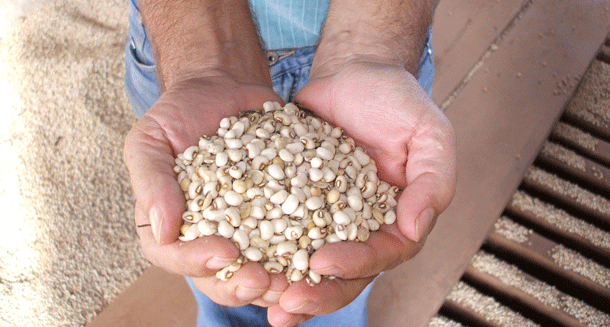 A Brazilian farmer holds a handful of soybeans, one of the largest historical drivers of deforestation in the Amazon. (Photo: Bobby Bascomb)

Brazil may be struggling to be a “green” host for the World Cup, but Dan Nepstad, director of the Earth Innovation Institute, tells host Steve Curwood that Brazil is already a top winner in tackling global warming emissions, as it has reduced its tropical forest deforestation by 70% since 2005.

CURWOOD: That loud, raucous trumpet called the vuvuzela, dominated the soundtrack of World Cup Soccer in South Africa in 2010. This year, in Brazil, the Ministry of Sports promoted a different noisemaker.

The caxirola, a small plastic shaker, was unveiled as an environmental symbol by Brazil's President Dilma Rousseff.

VOICEOVER: ...this green and yellow image of the caxirola, this fact that we are talking about a ‘green’ plastic, about a country that has the led the world in sustainability. And at the same time, it is an object capable of doing two things: combining images with sounds and taking us to our goals.

CURWOOD: But the caxirola turned out to be an effective missile for angry fans, and the objects have been banned from the matches. Thousands if not millions of caxirolas were made, and they now serve as a symbol of wasteful excess spending.

That's much the same criticism leveled against the massive stadia erected in cities like Manaus where their value is unclear once the World Cup's over, while promised infrastructure and transport improvements for the country have yet to be built. But Brazil still has something to celebrate.

CURWOOD: Along with the World Cup, there's news of recent success in protecting forests. Brazil used to clear nearly 8,000 square miles of rainforest every year, an area the size of Massachusetts. But since 2005, the rate of deforestation has dropped 70 percent, now it's about 2,000 square miles, the size of Delaware. Keeping that forest standing prevents 3.2 billion tons of carbon dioxide from entering the atmosphere—about two years worth of emissions from all cars and light trucks in the U.S. Dan Nepstad, the Executive Director and Founder of Earth Innovation Institute, says several factors explain Brazil’s success in cutting deforestation.

The Caxirola was invented by Brazil to be the sound of the World Cup but it turned out to be a convenient missile for angry fans and was quickly banned in the stadiums. (photo: captiv8 promotions)

NEPSTAD: There’s a really fascinating story here about how big industries, like soy industries and meat packing industries came together with non-governmental organizations to basically work out a deal so that soybeans grown on fields that had been cleared after a cut-off date, July 2006, would no longer be acceptable. This is called a soy moratorium. And it started with a Greenpeace campaign that targeted some McDonald's stores in Europe and really put Cargill and McDonald's and other groups like that up against the wall. More recently in 2009, there was something called the cattle agreement. Not quite as many companies involved, but once again companies wanting to be protected from the reputational risk of buying from farmers who might be clearing forests, and therefore vulnerable to the sort of attacks that Greenpeace does.

NEPSTAD: The deforestation blacklists basically said, listen, if your county is clearing more than 40 square km of rainforest every year, then your farmers can no longer access the big public agricultural credit programs. One farmer, who’s clearing a lot of forest, that farmer puts entire county at risk of losing its access to credit. In some countries that wouldn't be a big deal, but Brazil makes $50 billion available to its farmers every year through credit. When that policy was put in place, suddenly all of these counties started to organize and the mayor’s office got together with the beef sector with the soy sector and they said, “Let's fix this problem.” And they did it through collective action. About 11 of the 36 blacklisted counties have come off the list. They’ve gotten their deforestation below that 40 square km threshold.

CURWOOD: The Brazilian Amazon's huge, and the government has what, some 400 federal agents to patrol the area to see that there's not improper deforestation going on. How does that work?

NEPSTAD: They’ve developed some really amazing approaches. One is these hot spots that appear on the MODIS satellite sensor that are indicative of deforestation sets up a whole alert system and sometimes a helicopter full of armed men will go out to a big deforestation clearing and grab people and put them in handcuffs. The trick there though is: who owns that land? It’s been very difficult. Everyone knows when the helicopters are coming, or the jeeps on the ground. And often those teams of workers will scatter into the bush, and that's why another innovation is equally important if not more and important. It's called the Rural Environmental Registry. Basically it says that if you own land you've got to submit the parameters of your property to the government. It means that if you can see on the map, oh, here's a new patch of deforestation, you see whose land that deforestation took place on, and then you can cut them off from credit—even embargo their property—meaning that it's illegal for them to sell whatever they're producing on that farm, so that the instruments for enforcement are really getting much more powerful.

CURWOOD: Now, the overall trend in Brazil over the last eight years or so has been this 70 percent reduction in the deforestation rate, but over the last year or so that deforestation has increased. Why are more trees being cut down? How many more and why? 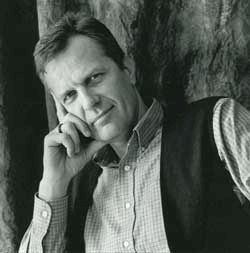 NEPSTAD: We tend to think of Brazil, we think of the Amazon, and not its shorter brother to the south or sister maybe is a better way to put that called the Cerrado. These are the woodlands and the savannas and native grasslands. Since 2010, deforestation has begun to inch back up in the Cerrado. And I think part of what we’re seeing there is because these voluntary supply-chain interventions of cutting farmers of soy or beef off of markets, those have been really focused on the Amazon. They haven't yet been applied to the Cerrado. So I think we're getting to point now where we need to expand and build upon the success in the Amazon to have a truly national agenda.

CURWOOD: Dan Nepstad, how important is it to the government to Brazil to be seen positively when it comes to tackling deforestation, especially in light of hosting the World Cup right now. 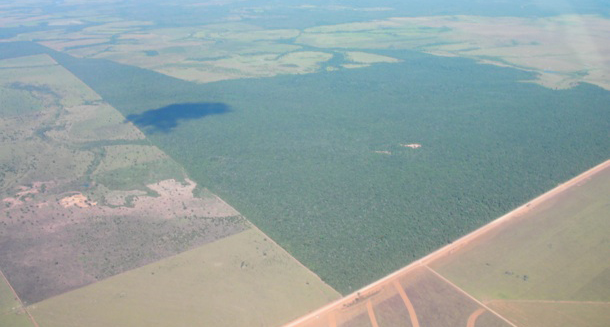 Farmers in the Amazon are required to keep 80% of their land forested. (Photo: Bobby Bascomb)

NEPSTAD: It's fascinating to me how little the Brazilian government has made of the fact that they've reduced deforestation 70 percent and have reduced emissions more than any other country. Brazil really could very legitimately say to the world, “We're not just the best in soccer, we're the best in agricultural growth, but we're also doing our part to keep forest standing, protect indigenous lands and greatly lower greenhouse gas emissions.”

CURWOOD: Dan Nepstad, is the Executive Director and Founder of Earth Innovation Institute and one of the authors of the article on deforestation in Brazil in the current issue of Science. Thank you so much.