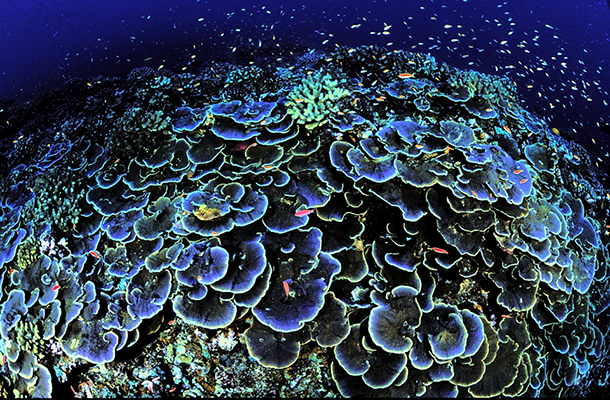 U.S. TO CREATE WORLD’S LARGEST MARINE RESERVE: President Obama has announced plans to expand the size of the Pacific Islands Marine National Monument nine fold, to make it the largest marine reserve on the planet. Jackie Savitz from the environmental organization Oceana tells host Steve Curwood it's a big step for ocean conservation.

CURWOOD: From the Jennifer and Ted Stanley Studios in Boston and PRI, this is Living on Earth. I’m Steve Curwood. President George W. Bush created a huge marine sanctuary in the Pacific Ocean, and now President Barack Obama says he wants to make it the biggest marine reserve in the world. For the President, protecting the ocean is a personal as well as an environmental imperative.

OBAMA: You know, growing up in Hawaii, I learned early to appreciate the beauty and power of the ocean. Of course we also know how fragile our blue planet can be. Rising levels of carbon dioxide are causing our oceans to acidify. Pollution endangers marine life. Overfishing threatens whole species, as well as the people who depend on them for food and their livelihoods.

CURWOOD: President Obama made the announcement as Secretary of State John Kerry convened diplomats, experts and advocates from around the world to work on ocean conservation by addressing marine protected areas, illegal fishing, false-labeling and ocean acidification. Jackie Savitz is the Vice President of U.S. Oceans for the non-profit, Oceana, and joins us now. Welcome to Living on Earth, Jackie.

SAVITZ: Thanks, Steve. Glad to be here. 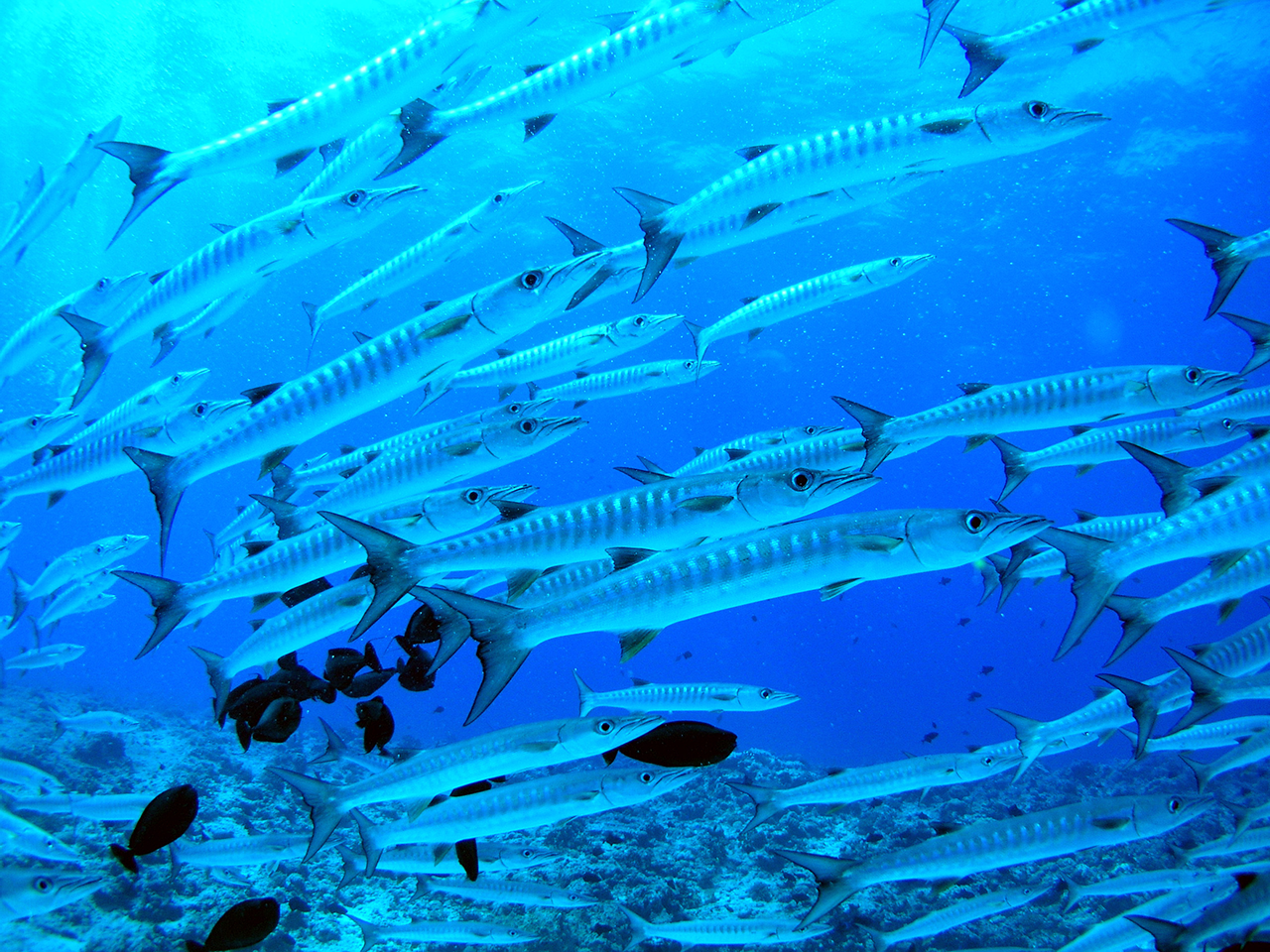 CURWOOD: So, President Obama says he wants to create a new marine reserve. What exactly is he talking about and how big would it be?
SAVITZ: Well, it’s actually a very exciting proposal. He's proposed to expand the Pacific Remote Islands Marine National Monument from about its current size of about 87,000 square miles to nearly 780,000 square miles. It would make the Pacific Remote Islands Monument nine times the size it is today.

CURWOOD: How hard is it going to be for President Obama to make this enormous marine reserve happen? Who might be opposed to something like this, and what could they do to try and stop it?

SAVITZ: Well, we hope it won't be too hard. What he's supposed to do is to use the summer as a public comment period where he'll be able to take input from all of the stakeholders that might be interested, and that would include fishermen, both recreational and commercial fishermen, tourism interests, as well as environmental organizations like Oceana. Typically, what you see is, commercial fishermen are often opponents to this, and so they’ll have to take a look and see whether they feel it is a big imposition on them or not, but we have to keep in mind that these protected areas actually have benefits to fisheries. A lot of fish have larvae that are planktonic, which means that they kind of drift with the tides and the currents, and even sometimes the winds. And so what that means is that larvae that are spawned by fish in a marine protected area can actually end up growing up and living most of their lives far away from that area, and so that’s something that could benefit fishermen in the future. 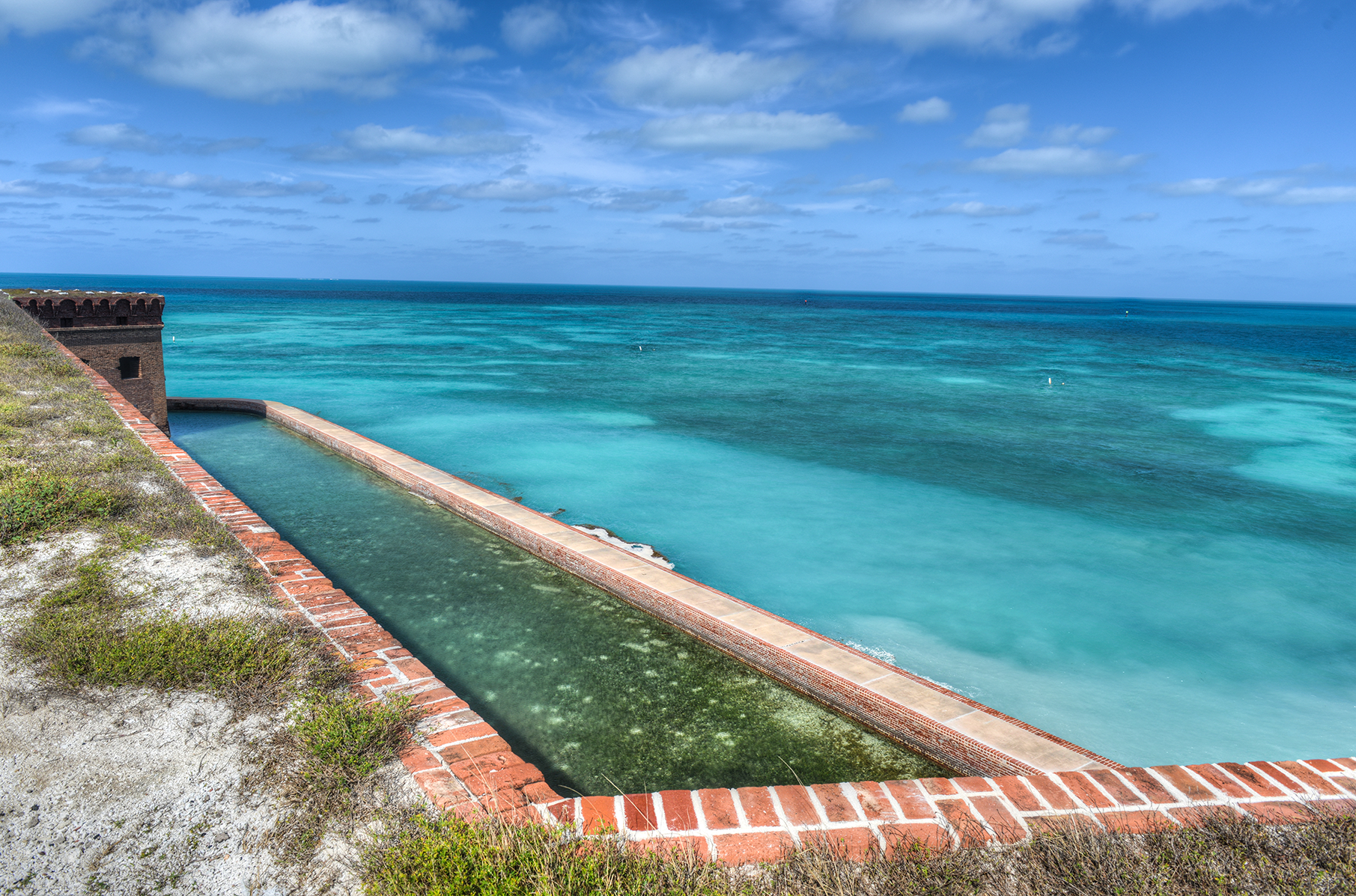 While relatively small in size, the Dry Tortugas marine area in the Florida Keys has improved fish stocks throughout the region. (Photo: big stock photo)

CURWOOD: How effective is it to protect large tracks of ocean in terms of conserving marine species?

SAVITZ: Well, it’s been shown to be very effective. What they find is that you see an increase in both the number of animals that are in the area and also the diversity—the different types of species that are present—and diversity, of course, leads to a more stable community. A community that can be more resilient to impacts, like the impacts of climate change, for example, but the thing that people don't realize is that the protected areas can actually have impacts much further from the protected area than you might expect. And a really good example of that is, there was a study done in an area called the Dry Tortugas, which is just west of Key West in Florida, which is a marine protected area. And what they found there was that the entire region benefited, so not just the area west of Key West, but also all throughout the Florida Keys and even around to the east of the Keys on the way up to Miami.

CURWOOD: Now, there are a number of marine protected reserves around the world, some of them people say are really just lines on a map and not particularly well enforced; others do better with protecting the species there that they promise to protect. How does the United States enforce a protected area like this way off in the middle of the Pacific? 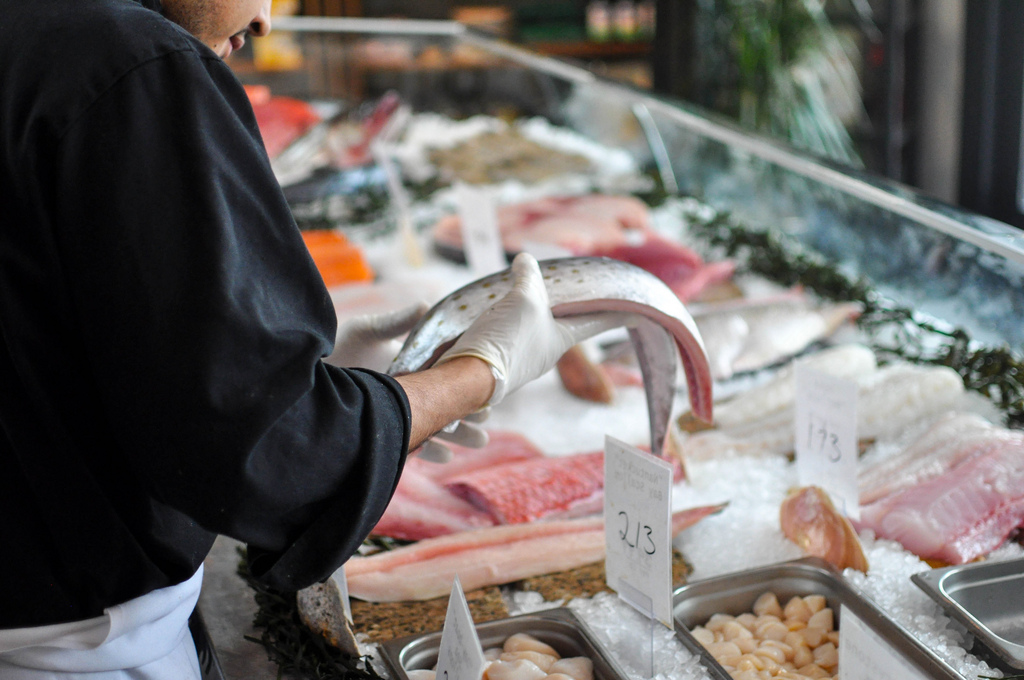 As much of a third of all fish sold in the United States is labeled as something other then what it is (photo: Oceana)

SAVITZ: That’s a very good question, and a very good point. Once an area’s designated for protection the next challenge becomes enforcement. It’s a big challenge, and people are starting to use things like satellite technology, radar, local knowledge—all kinds of new tools tied to technology. And I actually think in the next couple of years we’re going to see major advances in fisheries enforcement.

CURWOOD: Now, Secretary of State John Kerry invited a number of other countries to talk about conservation. What were the most important voices outside the United States that you heard at the Secretary’s gathering?

SAVITZ: You know, Secretary Kerry really did something unprecedented with this conference. At the very beginning, he opened the conference by saying, “I don't just want to talk. I want to actually get things done.” It led to a very long list of commitments that were made by the U.S. government, by President Obama and also by foreign governments that were here at the conference. A number of countries stood up, especially some of the island nations like Kiribati and the Bahamas, the Cook Islands, Palau, and they talked about the importance of protecting their fisheries, and many of them designated extremely large areas of their exclusive economic zones, in some cases their entire exclusive economic zones as marine protected areas, some of them with very strong restrictions on industrial fishing. And I think when you add them all up, you start to see a really important trend in protecting areas that can lead to great increases in the long run and fishery abundance in our ability to feed people protein from the ocean. 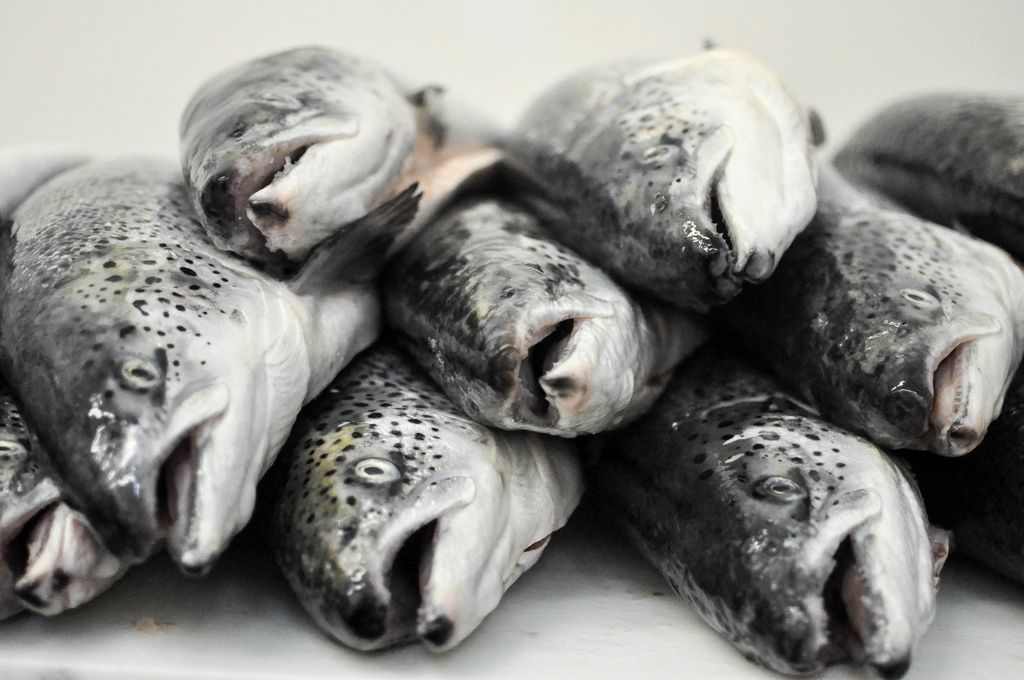 These are definitely salmon, but where did they come from? (Photo: Oceana)

CURWOOD: Now, President Obama has also announced that he wants a new federal program aimed at stopping illegal fishing and also seafood fraud. What would such a program like that do?

SAVITZ: Well this is a really important issue. As you know, what you're purchasing when it comes to fish may not actually be what you're getting, and we know this because Oceana did a study where we looked at 1,300 samples of fish, and only about two thirds of them were what they were marketed to be. And so the President announced that he'll set up a task force to curb illegal fishing and seafood fraud. And that’s something that Oceana is very happy to hear, and something that we've been very concerned about for some time.

CURWOOD: How big a deal is seafood fraud, do you think? 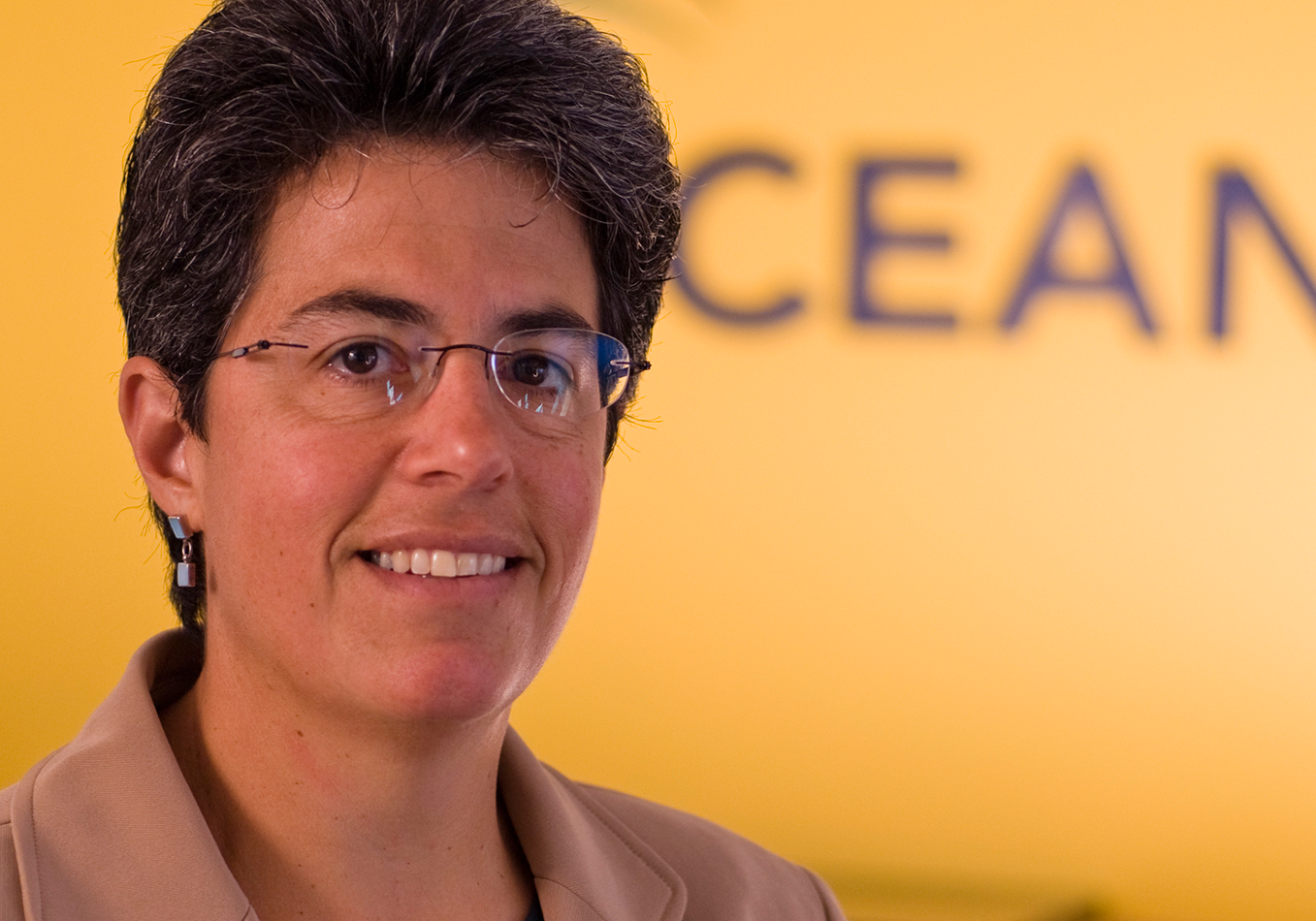 SAVITZ: Well, it depends on how you look at it. From a consumer standpoint, a third of what you order may not actually be what you're getting. That could have health implications, for example, if you're a woman of childbearing age and you try to order a low-mercury fish like grouper, but you’re served a high-mercury fish like tilefish, then it affects your health and potentially you’re baby's health. Similarly if you're a consumer that’s trying to order sustainable seafood and they serve you something that’s not sustainable, then it's taken away your ability to use your consumer power to promote sustainable fishing. The other big concern is that illegal fishing is responsible for as much as a third of the fish that are actually coming in, and that’s a big problem. 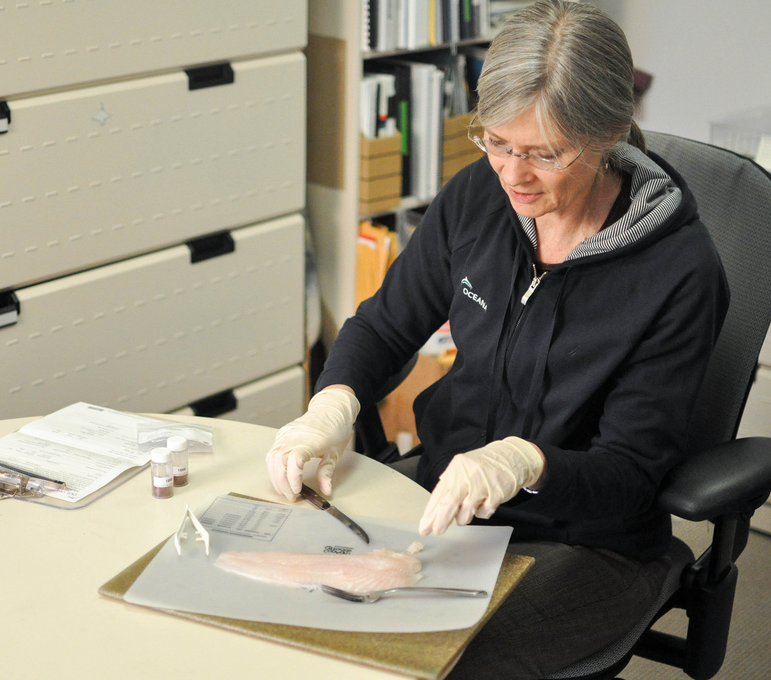 CURWOOD: Defined for us what's an illegal fish?

SAVITZ: Well, if someone is fishing in an area where there's no fishing allowed, like in a marine protected area, or if they're using gear that is not allowed, such as driftnets which are very harmful to marine life and have been banned in a lot of areas, or they could be fishing without a permit, or they can be taking more than their limit. So there's a whole variety of different ways that fish can be caught illegally, and anytime that happens it undermines the management measures that have been put in place on purpose to make sure we take just enough fish so that the populations can continue to produce fish for the future. Now if we set up a traceability system so that all fish that comes into United States can be traced from boat to plate, we can make it so that there’s QR code, which is one of those codes that you see you can scan with your phone, and you can scan it, and you should be able to find out everything about that fish—what it is, where it was caught, when it was caught, what gear was used to catch it, and how it travelled from the boat through the supply chain to your plate. And you can see some of these QR codes at stores like Whole Foods where they actually sell some of these fish that are being voluntarily labeled with all this information, and that shows us it can be done. And it can be done throughout the entire fish market.

CURWOOD: Jackie Savitz is Vice President for U.S. Oceans for Oceana. Thanks so much for taking the time, Jackie.

SAVITZ: Thank you, Steve. It's my pleasure.

Jackie Savitz is the Vice President of U.S. Oceans at Oceana