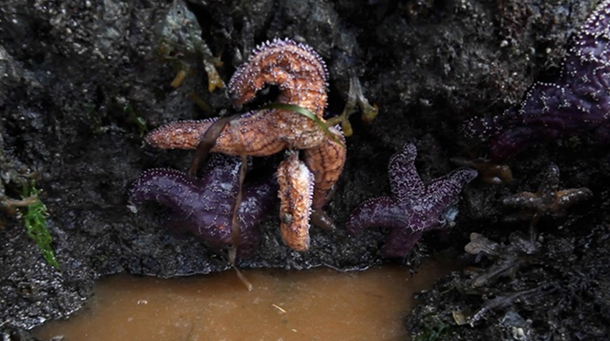 An ochre star's arm dangles by a thread, one of the signs of sea star wasting syndrome. (Photo: EarthFix/ Katie Campbell)

The sea star population off the Pacific Northwest coast is in trouble. Researchers suspect that warming waters and a pathogen in the food chain could cause this sea star wasting syndrome, as Ashley Ahearn reports.

CURWOOD: Protecting vast areas of the Pacific Ocean round far-distant U.S. possessions may be an important key to conserving ocean species and biodiversity, but right on the Pacific Northwest coast, some beloved ocean-dwellers are in serious trouble. Scientists have been puzzled and alarmed to watch sea stars sickening and dying with a peculiar malady that makes them rip themselves apart. But now, as Ashley Ahearn of the public media collaborative EarthFix reports, science is getting a better handle on what exactly what is going on.

AHEARN: The village of Eastsound on Orcas Island draws thousands of tourists in the summer months. They come to see whales, bald eagles and, for avid beachcombers, sea stars. In fact, the little beach in Eastsound is a sea star hotspot. Thousands of them cluster in the nooks and crannies of this rocky patch of island coast. But that may not be the case for much longer.

HARVELL: Oh, boy. Well I’ll tell you, Ashley, it’s a lot worse than it was last week, which is what we expected but it still doesn’t help to see the future when you see it. Look at all these. 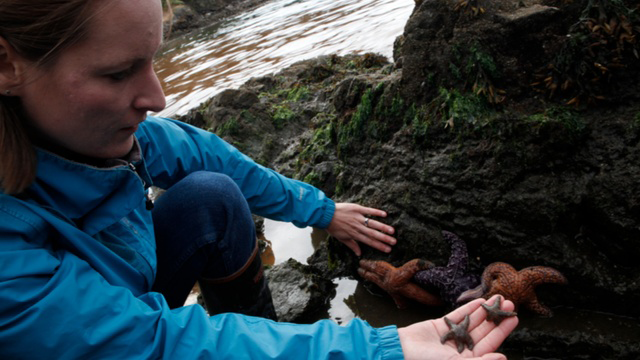 Morgan Eisenlord holds two juvenile starfish, one with abnormal limbs. She's looking for signs of how the next generation of young stars will be impacted by the wasting disease. (Photo: EarthFix/ Katie Campbell)

AHEARN: Drew Harvell has been studying marine disease for decades. She’s a marine epidemiologist with Cornell University and the University of Washington.

The Sea Star Wasting Syndrome has just arrived in the San Juan Islands after decimating populations up and down the west coast. Scientists think the cooler waters and swift currents surrounding these islands may have been protecting the population.

But now, the sun’s out. The water’s warming, and the sea stars are getting sick. Harvell points at a handful of orange and purple stars nestled into the rocks nearby. One’s arm is hanging on by a single gnarled string of flesh.

HARVELL: It kind of just looks dried out, wasted, thin, deflated. Sea stars are not supposed to look like that. 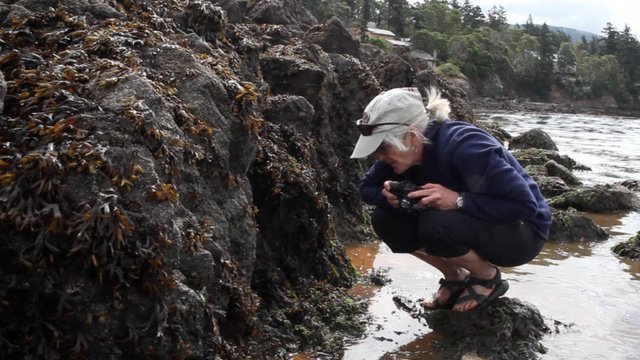 AHEARN: Last week when Harvell’s team visited this site they found one out of every ten stars was sick. Now almost half of the sea stars here are showing signs of the wasting syndrome.

HARVELL: Here’s a lesion on this one. Let’s get a picture of that. So that’s, kind of the next stage, is the appearance of lesions. And then, of course the bad part is the arms start to tear off.

AHEARN: Harvell says this is the largest documented marine epidemic in human history. Scientists have confirmed that there is an infectious agent to blame, but they’re not sure if it’s a bacteria or a virus. It appears to be transmitted through the water, or through physical contact.

HARVELL: Most of the stars in our waters probably have already been exposed‚ because if we bring them into the lab, and expose them to temperature stress, they get sick. 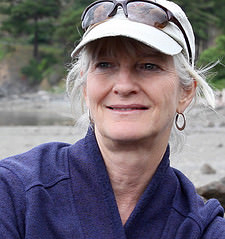 AHEARN: Warm water stresses out sea stars, sort of like when you’re fighting a cold and you get overtired, and then the sickness takes hold. So the hypothesis is that warmer waters may not cause the disease, but they can exacerbate it. That hypothesis seems to hold true further down the coast. Carol Blanchette is a research biologist at UC Santa Barbara whose been following the disease outbreak there.

AHEARN: But there’s another new hypothesis that Blanchette wants to explore. She thinks there could be a connection to what sea stars are eating. UC Santa Barbara has an aquarium right on the ocean. The tanks are filled with seawater that’s pumped in, and the aquarium’s sea stars got sick at the same time as the nearby wild population did.

BLANCHETTE: I don’t want to make too much of this because it’s a very small sample size, but it is interesting that there may be a link to acquiring the disease through the food that they’re eating. 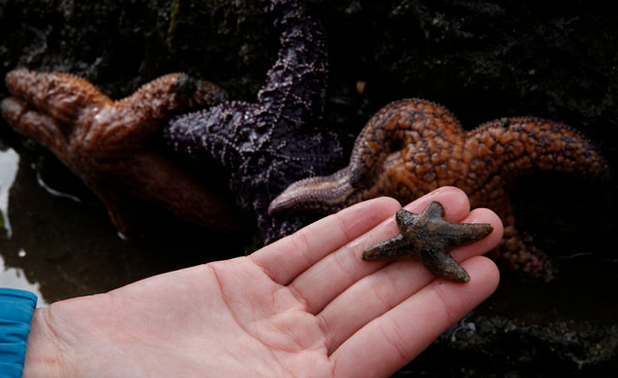 AHEARN: As filter feeders, mussels could be concentrating the pathogen in their flesh, and sea stars eat a lot of mussels. So what happens if all the sea stars die off? They’re an apex predator—a keystone species.

BLANCHETTE: Losing a predator like that to the system is bound to have some pretty serious ecological consequences. And we really don’t know exactly what the system is going to look like in the absence of having these predators around, but we’re quite certain that it’s going to have an impact.

AHEARN: Scientists at Cornell hope to identify the pathogen behind sea star wasting syndrome in the coming weeks. Their findings will be submitted to the journal Science. Sea stars have survived mass wasting syndromes in the past, but no one has ever seen a die off as big as the one taking place on the west coast now. 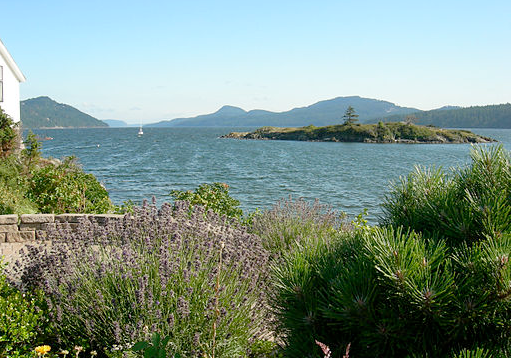 
Read more about the Sea Star Wasting Syndrome on EarthFix