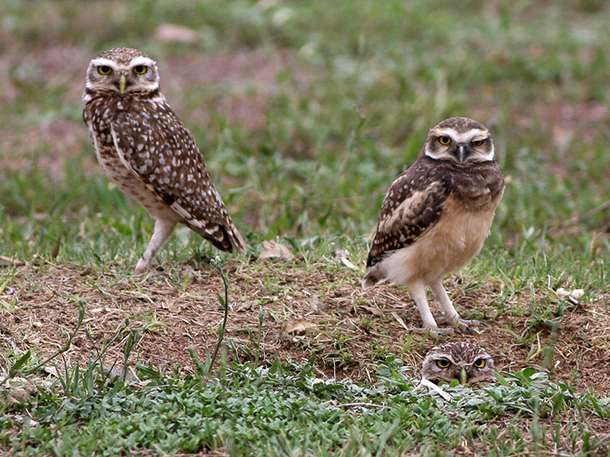 How many owls do you see? Two? Look down. (Photo: Ron Knight)

The rare burrowing owl lives underground and has numerous vocalizations, including a call that mimics rattlesnakes to scare off predators. From southern Idaho, producer Jeff Rice reports on his trip with a biologist to dig for the tiny owls.

CURWOOD: But before you do, take a listen to a story from Idaho where one biologist has been studying these owls for years. Jeff Rice has our report.

RICE: It's well over a hundred degrees out on the Snake River plain in southern Idaho, and biologist Jim Belthoff is digging for owls.

RICE: This is a study site on the Snake River Birds of Prey National Conservation Area, a few dozen miles from Boise. The vast expanse of tan-colored soil and sagebrush has one of the densest populations of nesting raptors in North America. Today, we're hoping to find some rare burrowing owls.

BELTHOFF: The owls will be down here in this chamber.

RICE: Western burrowing owls are one of the smallest owl species and live in abandoned ground squirrel or badger holes in wide-open areas like this one.

RICE: The field is next to a highway and seems barren—mostly clay soil and hardly even any grass—exactly the way the owls like it. 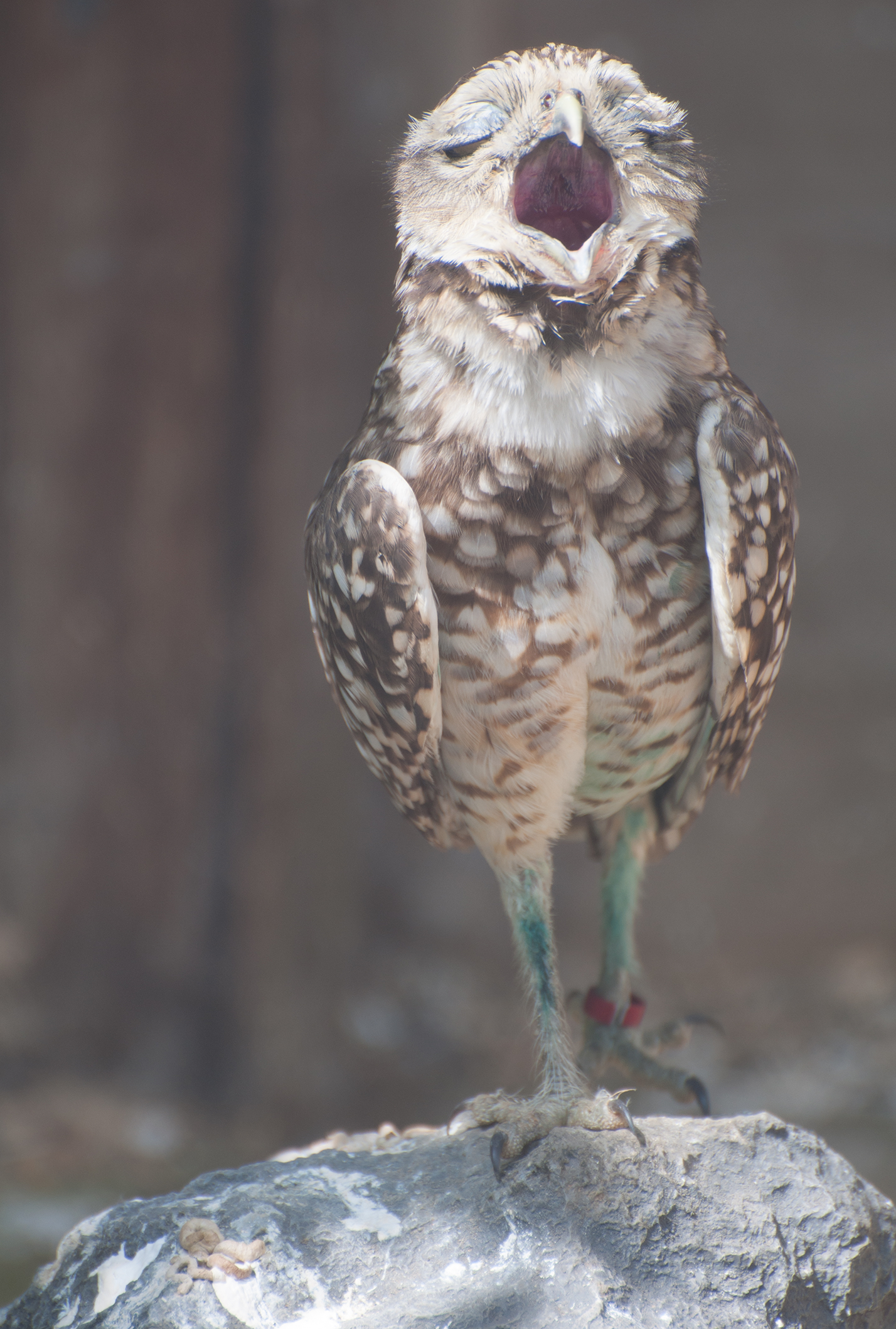 BELTHOFF: They like areas with very little vegetation—little or none actually is what they prefer. And the reasoning is that they like no vegetation so that they can see any ground dwelling predators approaching their nest, so they can get out of the way.

RICE: It's a strategy that works.

RICE: A tiny brown and white adult owl, no more than ten inches tall spots us. He rises up on a pair of spindly legs, sounding a warning call.

RICE: The rest of the owls are hunkered down, but we know right where to dig. Belthoff, a professor at Boise State University, has built some artificial plastic burrows. The owls have moved in and he can dig down to the lid and open the den up without too much trouble.

BELTHOFF: Some footprints in front of this one, so we'll probably find some babies in here.

RICE: Belthoff reaches his hand into the den to retrieve a bird and suddenly…

RICE: The sound is coming from inside the hole.

RICE: We know that this area is crowded with rattlesnakes, but Belthoff doesn't jump back. He reaches deeper into the hole, blindly feeling around.

RICE: He grabs something, coming out with a burrowing owl fledgling. The bird is about a month old. Its mouth is open, and it is hissing at us. 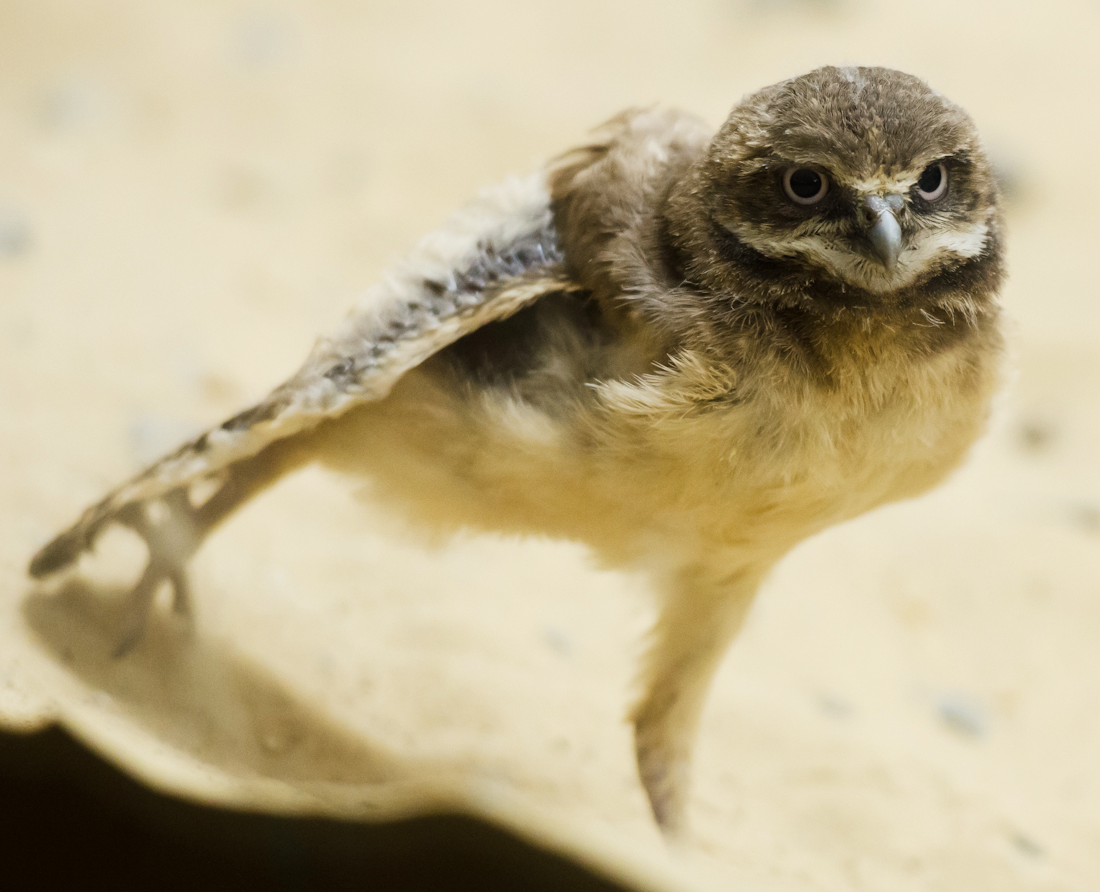 A juvenile owl, like this one, lives in a brood of 3-12 chicks. (Photo: Jim and Pam Jenkins, Smithsonian's National Zoo)

BELTHOFF: Burrowing owls have about seventeen documented types of vocalizations, of which this rattle call or hiss is one of them.

RICE: It's uncanny. Belthoff explains that it's something that only the juvenile owls will do. They haven't developed their ability to fly yet, so they need another way to ward off predators. 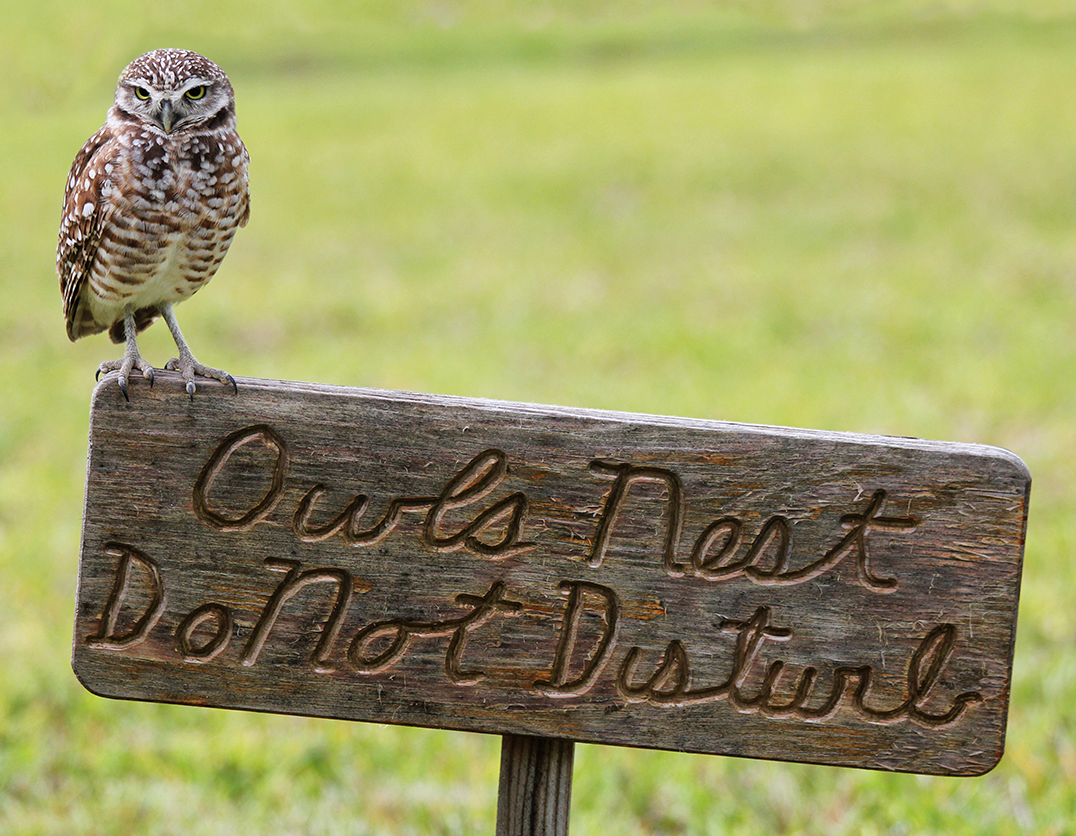 People hope to preserve this rare species by building safe habitats for them to live in. (photo: Chris Foster)

BELTHOFF: There's a lot of rattlesnakes in holes and so any potential predator that's coming up on this hole and sneaking down the tunnel would actually think twice, perhaps, if he hears a rattlesnake in there. Certainly, I feel some trepidation when I’m reaching my arm down in there and I hear those rattles, and I'm hoping it's not a rattlesnake.

RICE: The owl's mimicry is effective against predators like badgers, but it can't protect it from its biggest threat, bulldozers and creeping human sprawl. Burrowing owls are considered threatened or endangered in a number of western states. The owls tend to live on wide-open flat ground, a perfect place for shopping malls and parking lots.

RICE: That's why Belthoff is monitoring the birds—keeping track of their health and weight, and tagging them to study their migration patterns.

BELTHOFF: We band each one with an aluminum leg band, and then we give them three-color bands. So, then when they sit up on a perch, we can actually read those color-band combinations with a spotting scope. And we can tell whom it is we're dealing with without having to recapture them.

RICE: After the young birds are tagged, we cover up the owl den. An adult owl has been watching us from a fence post, probably the whole time. Its call, a bit less fearsome above ground.