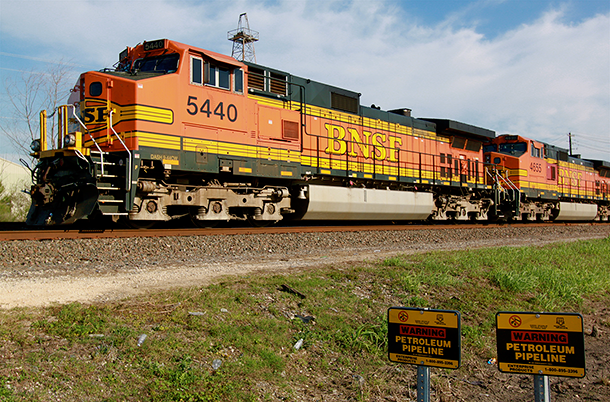 One of the largest freight railroad companies in North America, BNSF, transports much of the country’s flammable oil supplies through the Northwest. But BNSF management has forced workers to skip critical safety checks, and fired employees who blow the whistle on unsafe practices. Ashley Ahearn reports from the State of Washington.

CURWOOD: Fracking has helped boost gas and oil production in the U.S. to the highest in the world, even more than Saudi Arabia. And much of that oil is now shipped by rail, especially from the Bakken shale of North Dakota, the source of highly flammable and explosive crude. More than fifteen trains of Bakken oil cross the Northwest each week, most of it transported by the Burlington Northern Santa Fe Railway. An investigation by the public media collaborative EarthFix reveals some troubling patterns in the way BNSF deals with whistleblowers who voice concerns about safety. EarthFix reporter Ashley Ahearn has the story.

AHEARN: Curtis Rookaird doesn't look like the kind of guy who wants to pick a fight. He's soft spoken yet strong, with a calm, unassuming way about him. He was a conductor for BNSF Railway for six years before he was dismissed in 2010.

ROOKAIRD: I was just doing my job like I was trained to do that day. I didn't know I was going to be in such a battle. And it's a battle for my life, for my family, you know, not just for my job. 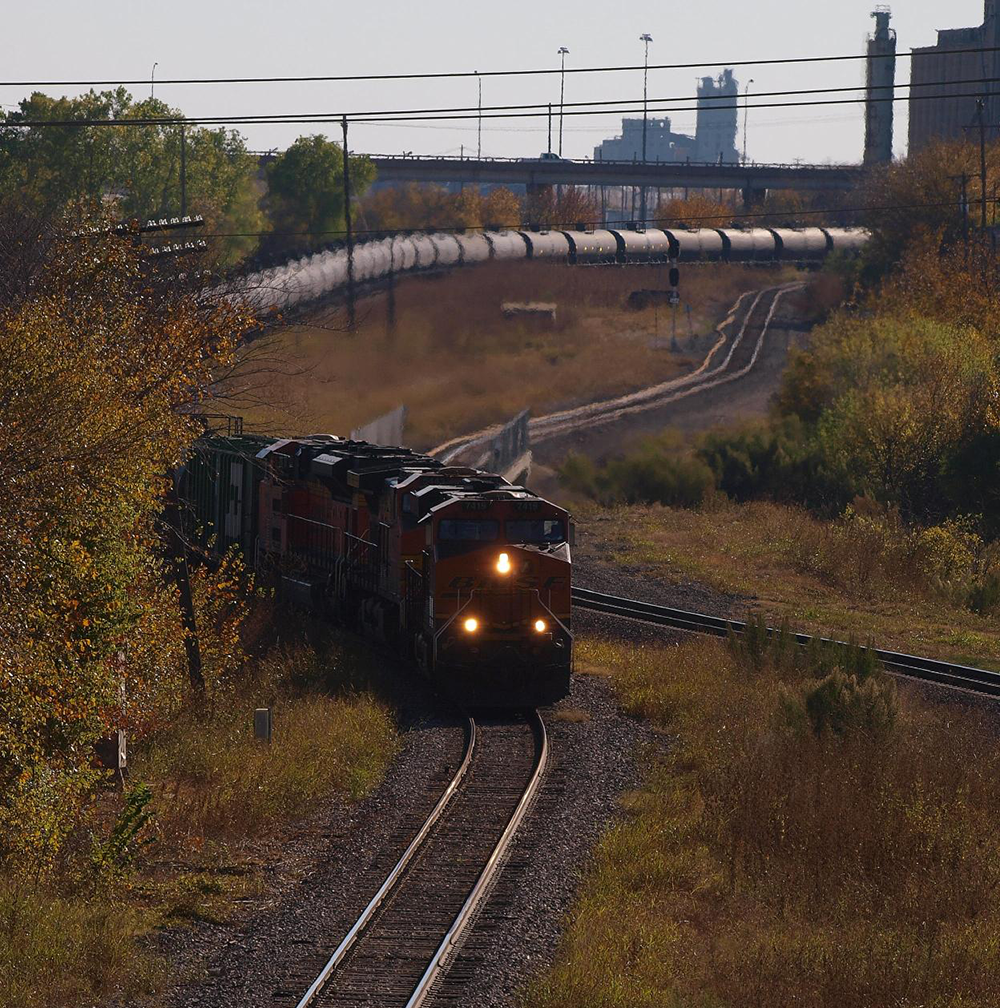 The BNSF freight network transports as many as a million gallon of crude oil in a single train. (Photo: Ashley Ahearn)

AHEARN: On February 23rd, 2010 Rookaird went to the rail yard in Blaine, Washington, ready to start lining up train cars and doing safety checks. One of the most important checks is called an air test. That's when a conductor or brakeman walks the length of a train to see if the airbrakes on each car are properly set and functioning.

ROOKAIRD: If you don't have brakes, the cars roll away from you. You don't have control of the train; you can crash into things.

AHEARN: Forty-seven people died last summer when airbrakes on a train carrying Bakken oil from North Dakota were deactivated, allowing it to roll into a community in Quebec. That investigation is ongoing. Testing airbrakes is standard operating procedure for Class 1 railroads, including BNSF. But on that day, Rookaird's supervisor told him and his crew to hurry up and that the airbrake test wasn't necessary.

ROOKAIRD: It was really odd. We were, like, looking at each other going, can he be serious? What is going on here? Why would he even ask that? Yes, it does need to be tested, and he goes, “Well, we'll talk about it later.”

AHEARN: Instead of, “talking about it later,” Rookaird was dismissed. A replacement crew was brought on hours before his shift was supposed to be over. Rookaird called the Federal Railroad Administration, which regulates railroads, and asked if he'd done anything wrong. The FRA said he was right to have conducted the airbrake test, even though his supervisor told him not to. Later, the FRA conducted an investigation of the incident and fined BNSF Railway. 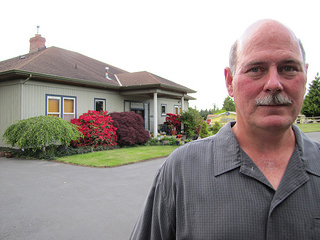 The FRA declined to be interviewed for this story.

BNSF Railway fired Curtis Rookaird. The company claimed he failed to work efficiently and had not properly filled out his timesheet that day. Rookaird and other current and former BNSF employees say management values speed over safety.

ROOKAIRD: They get performance bonuses based upon velocity and if they don't show those cars moving, they don't get those bonuses.

AHEARN: Curtis Rookaird is not alone in his experience with BNSF Railway. EarthFix found three other pending cases where workers say they were fired for insisting that standard airbrake testing procedures be followed. In more than a dozen interviews, current and former BNSF employees described an intimidating work culture that discouraged workers from reporting accidents, injuries or safety concerns. Several spoke on condition of anonymity because they are afraid BNSF Railway will fire them for speaking out.

BNSF Railway declined to be interviewed for this story.

George Gavalla was the head Safety Officer at the Federal Railroad Administration from 1997 until 2004 and has worked on rail safety issues for 37 years. 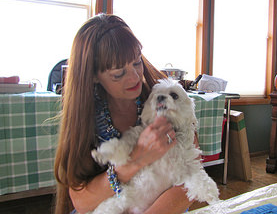 Curtis and his wife, Kelly Rookaird, face home foreclosure as their wrongful termination case awaits resolution in court. BNSF was ordered to rehire Mr. Rookaird by OSHA (the US Occupational Safety and Health Administration), but BNSF has appealed the finding. (Photo: Ashley Ahearn)

GAVALLA: If employees are either intimidated or discouraged from fully implementing all the safety rules and procedures it's going to impact on their own safety as well as on the public safety.

AHEARN: For example, say an employee is punished for taking the time to complete an airbrake test, that employee may not insist on conducting that important safety procedure in the future. Railroad safety records have improved over the years, but some in the industry say there is more work to be done.

KROHN: There's this entire culture of blame, and blame the messenger kind of situation. We've had situations were people have been fired because they continually did report safety violations.

Railroad worker fatigue is another issue that has dogged federal regulators for years. Railroad engineers and conductors have to be ready to report for duty on relatively short notice and their schedules are often erratic, making it difficult to get adequate or regular sleep. Krohn says that means the people working on any given oil train rolling through Seattle may have been awake for 24 hours at a time, and that, combined with fewer workers per train, could be a recipe for disaster.

KROHN: The history of railroads in America has been one where things generally don't get corrected until people die, and that is frightening to me.

AHEARN: In an emailed statement, BNSF Railway says it conducts frequent operational tests and audits to make sure employees are working safely and in compliance with all company rules. The company also pointed to its formal policies prohibiting retaliation against whistleblowers.

WALLACE: We have a safety culture; so if an employee sees something that isn't right—whether that's a supervisor-level or someone below them or at their level—they feel comfortable enough to say, “Stop, that is not the right approach.” And so it doesn't matter, and so it all begins and ends with us.

AHEARN: Curtis Rookaird is skeptical about BNSF Railway's commitment to safety. He believes that he was fired from his job as a conductor because he insisted that standard airbrake tests be done, even though his supervisor said to skip the safety procedure.

The Rookairds live on well-kept cul-de-sac in Snohomish, Washington. Curtis sits at his kitchen table with his wife, Kelly, when their two sons, Reese and Roman, come home from school.

ROOKAIRD: Oh the boys are here.

AHEARN: The couple adopted the boys from Russia not long before Curtis lost his job.

KELLY ROOKAIRD: Can I have a kiss?

AHEARN: Roman, who is nine, plops down next to his mom.

KELLY ROOKAIRD: Prior to the BNSF incident our world was pretty perfect. We were very very happy. We finally got our kids and it was a miracle that we got them. We were very blessed.

ROMAN: And the lord blessed us all.

KELLY: Blessed you too, right?

AHEARN: Curtis Rookaird has been in a legal battle with BNSF Railway for more than four years now, and things for his family have started to fall apart. He left for a while to work in the oil fields of North Dakota as a truck driver, but the pay wasn't as good as it was when he worked for BNSF. The family is now more than a hundred thousand dollars behind on their mortgage payments.

There's a fire in Kelly Rookaird's eyes when she talks about the ongoing case. She says that BNSF Railway, which is controlled by billionaire Warren Buffett, is delaying justice and had no right to fire her husband.

KELLY ROOKAIRD: Safety should come over money, and that's what I'd like to say to Warren Buffet. Wake up. Us little people—you can take everything from us—but you're not going to take our pride and our dignity. He loved his job [CRYING] and we loved his job too. And he would take those boys out to the train and teach 'em about the engines, and let everybody see his kids. He thought, well, maybe one day one of these kids might want to follow in his footsteps, but now that we go through this, I don't know. It's bittersweet, you know.

AHEARN: In September of last year, the Federal Occupational Safety and Health Administration ruled in favor of Curtis Rookaird and ordered BNSF Railway to put him back to work. BNSF Railway appealed OSHA's ruling, as they have done with several other similar whistleblower cases.

The Rookaird's home is now in foreclosure, and the family could be forced to move within a month. Curtis Rookaird's case won't go before a federal court until May of next year.


Read the piece on EarthFix, with documents

A map of crude oil transport facilities from BNSF