As global biodiversity steadily disappears, so do the world’s languages, says a new study from the World Wildlife Fund finds. Host Steve Curwood speaks with Jonathan Loh, a Research Associate of the Zoological Society of London, about the parallels and the need to conserve both nature and culture.

CURWOOD: So if the sea does swallow the island up, it will take with it an English dialect that exists nowhere else. And many of the seven thousand or so languages spoken round the world are also under threat. A new report from the World Wildlife Fund finds that where linguistic diversity declines, biological diversity often falls as well. Jonathan Loh is a Research Associate of the Zoological Society of London and a study co-author, and he says that is why it's important to conserve both biological and cultural diversity. Welcome to Living on Earth, Jonathan.

CURWOOD: Comparing language, and species diversity seems, well, a bit of an unusual pairing. How did you get into this?

LOH: Well, I am a conservation biologist in my background, and I got interested in the problem of endangered languages. And it really started out as a little bit of a hobby, but the more I looked into it, the more fascinated I became because I realized that, in fact, there’s some extraordinary parallels between biodiversity and linguistic diversity.

LOH: Biologists use a system called the IUCN red list for assessing the threat status of different species around the world, and we applied exactly the same criteria that a biologist would use to assess the status of a species in order to determine how threatened a language is.

CURWOOD: IUCN, by the way, is the International Union for the Conservation of Nature. So, in sum, what did your study find? 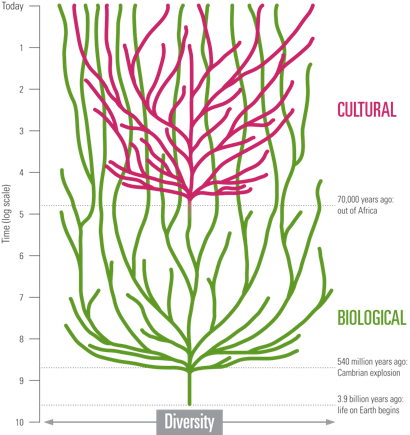 The cultural tree of linguistic diversity began to diversify much later than the biological tree, after humans came on the scene. (Image: Loh and Harmon, 2014. Biocultural Diversity: threatened species, endangered languages. WWF Netherlands. Zeist, The Netherlands.) 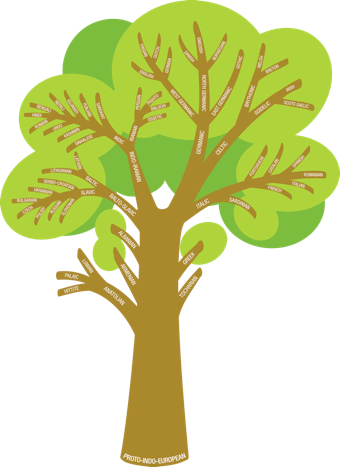 CURWOOD: So, why is there such a close link between the decline in linguistic diversity and biological diversity? 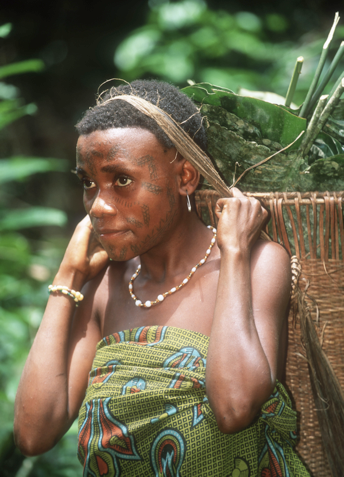 LOH: Some of the drivers that are driving the extinction of biodiversity, and the decline of biodiversity—such as increasing global population, increasing consumption of natural resources, increasing globalization and so on—are applicable to languages as well, and those basic drivers are having a similar effect on linguistic diversity as biodiversity. You can look at the evolution of languages in a similar way to the evolution of species, and languages evolve over time. Of course, languages evolve much faster than a biological species, but nevertheless, you can trace closely related languages back to common ancestors. And then there are also remarkable parallels in the ecology, if you’d like, of languages and if you look at the distribution of the world's languages on a map, you'll see that the patterns of diversity of languages is not evenly spread around the world. There’s a much greater density of languages spoken in the tropics and as you move away from the tropics towards the poles, there are fewer and fewer languages spoken, which is exactly the same pattern that you see with species diversity.

CURWOOD: Talk to me about where you see the parallel declines and the lifestyle of the humans who are losing their languages. 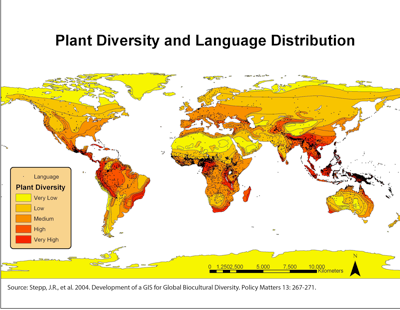 LOH: One of the interesting findings was that where a species goes extinct—because the population of the species declines away to nothing—a language doesn't go extinct because the population of speakers declines away to nothing, but usually because the speakers shift from their mother tongue to a second language, usually a more dominant one, and increasingly this means that the thousands of indigenous languages spoken around the world are being replaced by one of a dozen or so dominant world languages like English, Spanish, Mandarin Chinese. The places which are losing languages most rapidly are the Americas and Australia. About three-quarters of the languages of the Americas are under the threat of extinction, and in Australia, the situation, if anything, is more critical where ninety-five percent of the indigenous aboriginal Australian languages are threatened with extinction and declining extremely rapidly.

CURWOOD: What is your research tell us about the value of these less dominant indigenous cultures? 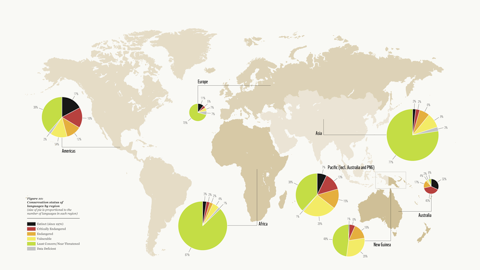 LOH: The cultures have evolved in a particular environmental context, so they have an extraordinary amount of traditional ecological knowledge—knowledge of the local species, plants, animals, the medicinal uses of them, the migration patterns of animals behavior—this vast wealth of knowledge, and that knowledge is encoded in their indigenous language. And sadly, when children stop learning the language, they also stop acquiring that traditional knowledge. So there’s tens of thousands of years of knowledge acquired over the course of human evolution about different environments of the world, but that's just, kind of, the useful aspects of the traditional culture—because of course the enormous cultural diversity that there is worldwide embodies more than just the knowledge of how to survive. It includes food, music, clothing, everything that we might consider being as part of culture has evolved in different ways, in different parts of the world, and as with species, when a language is lost, it's gone forever. You can never get it back.

CURWOOD: So Jonathan, if both biological and cultural diversity are important to preserve, what should we do, how do we move forward? 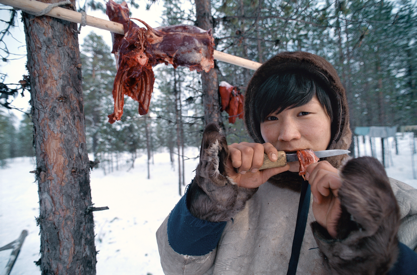 LOH: I’ve met now a number of linguists who are working on endangered languages and trying to record them and transcribe them and write down grammars and dictionaries, and it struck me how useful it would be if biologists and linguists could work together on this, for a couple of reasons. There’s this extraordinary wealth of traditional ecological knowledge that's bound up with a lot of the world's indigenous languages, and I think it would be really useful to biologists in understanding how to manage natural ecosystems. And linguists often don’t have the knowledge of natural history that’s necessary in order to be able to record an endangered language because so much of the lexicon is tied up with names of species or types of ecosystems, and linguists don’t have the training in that. And if we can recognize that culture and nature are inextricably interlinked, then working on a biocultural diversity as a whole, as a subject, would be a more fruitful way of looking at conservation. 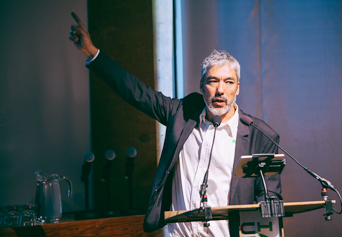 Jonathan Loh is a Research Associate at the Zoological Society of London and co-author of this study. (Photo: courtesy of Jonathan Loh)

CURWOOD: Jonathan Loh is a Research Associate of the Zoological Society of London. Thanks so much for taking the time with us today, Jonathan.

LOH: It's my pleasure.