A tidal current turbine that will be installed in Scotland’s Inner Sound (Photo: MeyGen.com)

Scotland is a world leader in tidal and wave power research and hopes to produce all of its energy from sustainable low-carbon sources by 2020. Host Steve Curwood spoke with Calum Davidson, Director of Energy and Low Carbon with Scotland’s Highlands and Islands Enterprise about the project to install the world’s first commercial tidal turbine array.

CURWOOD: Now, as Lang Banks noted, Scotland is rich in sources of renewable power, and it will soon install the world’s largest tidal power array in the far north, in the Pentland Firth near the Orkney Islands. The project will ultimately anchor 300 or more turbines on the seabed, creating jobs and helping Scotland reach its renewable energy goals. Calum Davidson is the Director of Energy and Low Carbon at the Highlands and Islands Enterprise, a Scottish government agency, and we called him up at his office in Inverness. Welcome to Living on Earth.

DAVIDSON: Thanks for having me.

CURWOOD: So what's the goal of this project to have tidal energy capture?

DAVIDSON: Well, Scotland's been a leader in the wave and tidal energy for about 15 years, even a bit more with some of the work at universities and pretty much most of the world's main manufacturers have been here in Scotland testing and developing their device. So we're moving to the next stage, which is to build out the world's first commercial-scale tidal offshore power station, and the focus here is very much on creating a new clean no-carbon source of electricity that we can develop both for Scotland, but also help the rest of the world.

CURWOOD: So commercial scale is starting. How soon are you going to be able to generate electricity to sell to the grid from tidal power? 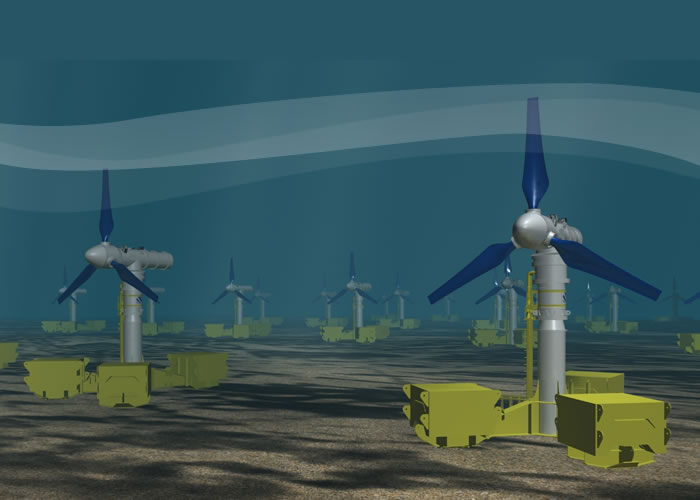 DAVIDSON: Yeah, well, a lot of the prototype devices have already been doing that at the test center because it is being grid connected and they've been testing and making money and some machines have been running three or four years. What we're planning to do now is just build out, starting in the next few months actually, putting in four 1.5 megawatt turbines, and that's the first phase of a 400 MW underwater power station to be built out over the next 10 years.

CURWOOD: So talk to me about the timetable. You have all the money for this by now, I gather?

DAVIDSON: Yes, last week the private company, which is Atlantis Resources - they're originally from Singapore now based in Scotland - they put together a 50 million pound sterling which is about $80 million, for this very first phase which will be built out during 2014 and 2015. And then there's going to be what we call a fallow year in 2016 where there's going to be a lot environmental monitoring going on to make sure there's no adverse impact on the environment. By the end of this decade in 2020, 60 turbines will have been built.

CURWOOD: And ultimately you expect... 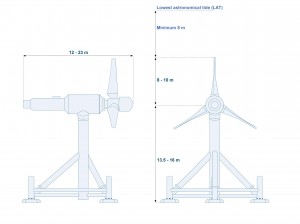 A diagram of the tidal current turbines to be installed in Scotland’s Inner Sound (Photo: MeyGen.com)

DAVIDSON: Well, 400 megawatts. Maybe 500 megawatts. That's half a gigawatt. That's pretty much the same size as a major thermal power station, and that will be - you know - 300 turbines.

CURWOOD: So what are the environmental risks of commercial-scale tidal power?

DAVIDSON: Well, of course, for something like this, a brand new technology, there's been a huge amount of work gone into the environmental impacts and really the financial closure last week was on the back of three or four years of environmental studies. But, of course, nobody has done this before to any great extent, putting a number of turbines there, so the 2016 will be very much focused on monitoring the impact on things like marine models and the seabed and diving birds, for example, and on fisheries. But expectation is because the tidal currents are so strong in that part of Scotland, and the waters there can be moving in four to five meters per second, which is really quite enormous, the seabed actually doesn't have a huge amount going on to it, it's pretty much bare rock. And actually, the blades, they don't turn very quickly, they're going slowly, sort of womp, womp, womp as opposed to, for example, an onshore wind turbine. And some major studies have shown that the effects are quite minimal and quite acceptable.

CURWOOD: Now, how much carbon does this save going into the atmosphere? 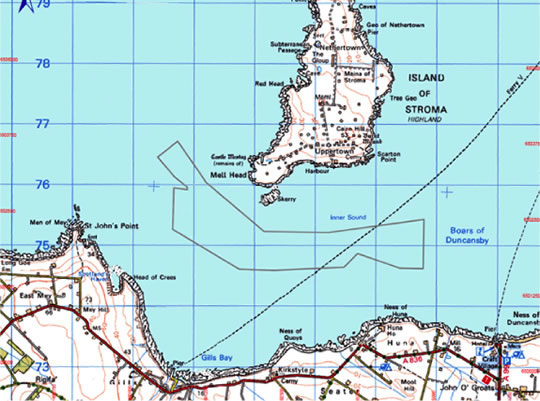 A map of the Pentland Firth in northern Scotland, where the world’s largest tidal array will be installed (Photo: MeyGen.com)

DAVIDSON: Yeah, I mean, the carbon savings are very dramatic. If we're looking at this very first, very modest six megawatts, it's going to save 14,000 tons of CO2 a year compared to coal and once the big power station has been built, it's going to save a million tons of carbon a year.

CURWOOD: So at the end of the day, what kind of employment does this project create?

DAVIDSON: Yeah, well, Scotland currently has had very ambitious and very large renewable energy marketplace. We have a significant amount of hydro, lots and lots of onshore wind. And interestingly, in Scotland, there's currenty about 11,000 people employed directly in the renewables industry. That's actually more people employed than in the scotch whisky industry. We expect this project to create about 50 direct jobs over the next couple of years, maybe another 70 in the supply chain, and as it builds out over the next decade, we're looking at several hundred jobs being supported by this clean, no-carbon underwater power station. 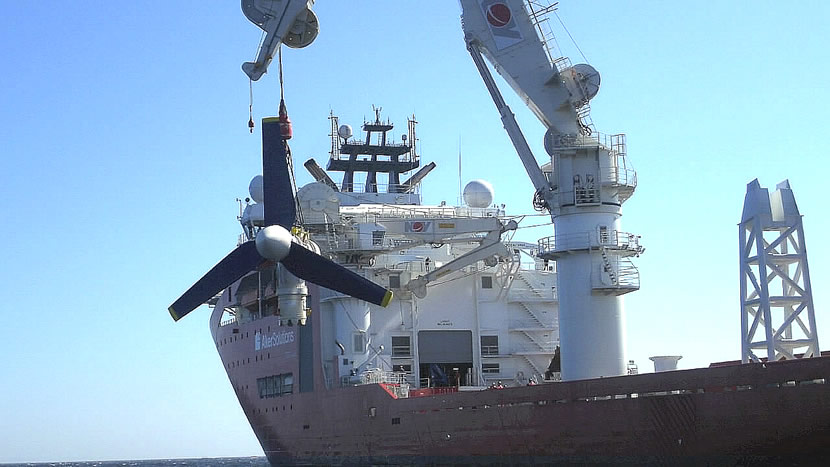 CURWOOD: I imagine this costs a fair amount of money. At what point, does this become profitable to do?

DAVIDSON: Yeah, we're talking about very early stage technology here, and that's not cheap, but the expectation is as the supply chain grows, and as we standardize and know how to put these things in order, the cost of developing tidal power will fall significantly. And the objective is to get to the same level that offshore wind is at the moment in the next few years.

CURWOOD: Now, one concern about renewable energy is that it doesn't operate all the time. How does this tidal power source fit into that concern?

DAVIDSON: Well the great thing about tidal power is that it's completely predictable and completely reliable. You get tidal power kicking in at different stages of the day so you build that in with a different energy mix, tie that back in with onshore wind, offshore wind, and hydropower. So it's a really good source of regular, clean, no-carbon electricity. 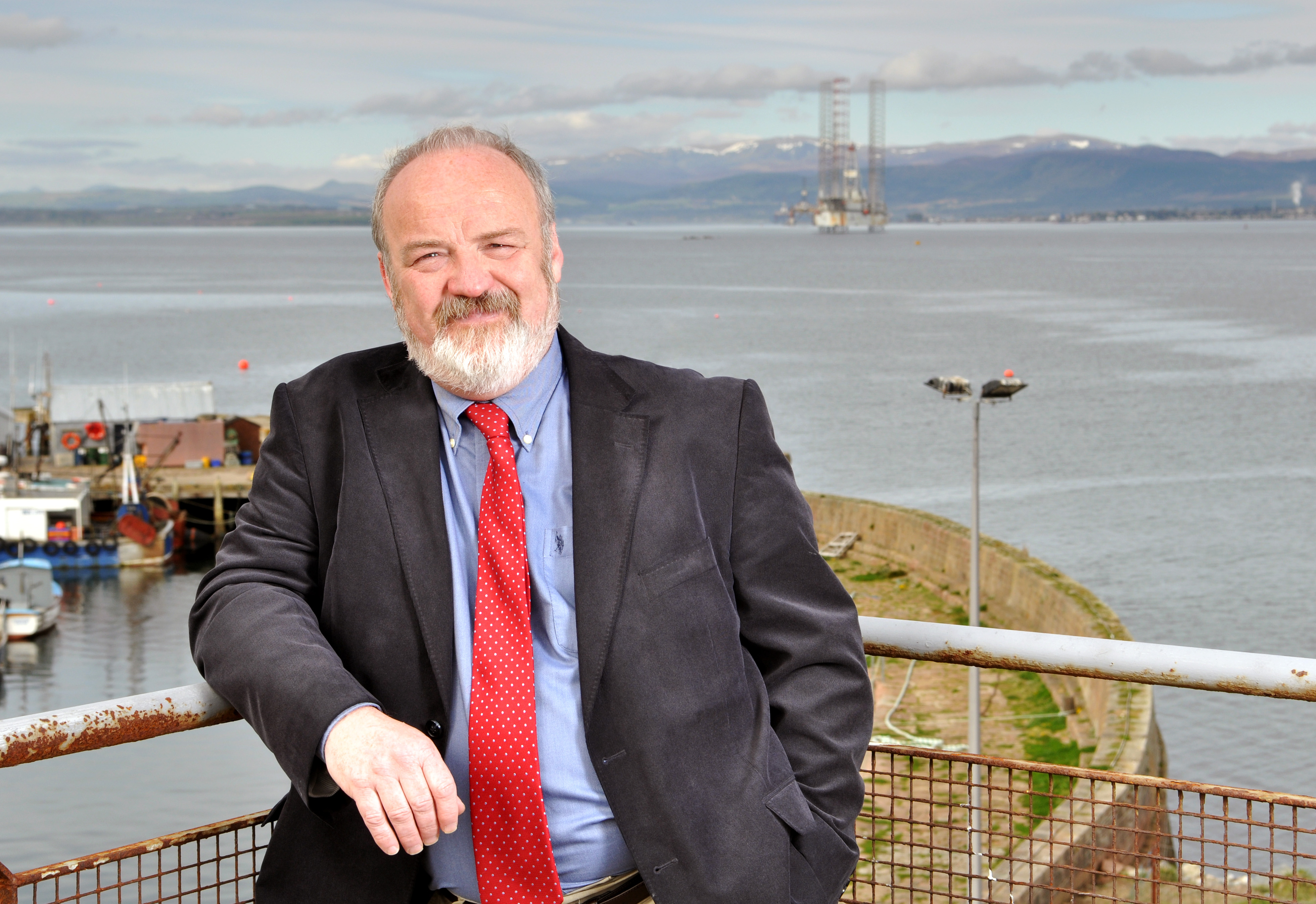 Calum Davidson is the Director of Energy and Low Carbon for Scotland’s Highlands and Islands Enterprise (HIE), a governmental agency. (Photo: Courtesy of HIE)

CURWOOD: How much of the day does it generate power?

DAVIDSON: Somewhere like the Pentland Firth is actually generating for pretty much 20 hours out ot a day. You know, it's a 13 hour cycle, there's only about one hour of the day when the tides, shall we say, doesn't move. When the tide is moving fastest it's in the middle of those cycles and that's when you get the most power and tailing off at either end of the tide. So the expectation is some of these things will be working at maybe 30, 40 percent efficiency?

CURWOOD: How do you feel about this going forward now?

DAVIDSON: Well, I'm really excited. There's not many people who get the chance to work at the start of new industry, and personally, I come from the part of Scotland where this is being build out, so it's kind of very very satisfying to know that the very small part of the world where you come from is right at the heart of creating a whole new global industry based upon low-carbon, no-carbon underwater tidal power.

CURWOOD: I suppose you could say you're part of a "sea change".

CURWOOD: Calum Davidson is the Director of Energy and Low Carbon at the Highlands and Islands Enterprise, that's the Scottish government agency. Calum, thanks for taking the time today.

DAVIDSON: Thank you very much for asking me on. Delighted.

Learn more about Atlantis Resources Limited, the company supplying the tidal turbines for the project

Read a press release from the U.K. Government, which is helping to financially back the project.