BirdNote® A River of Raptors Over Veracruz 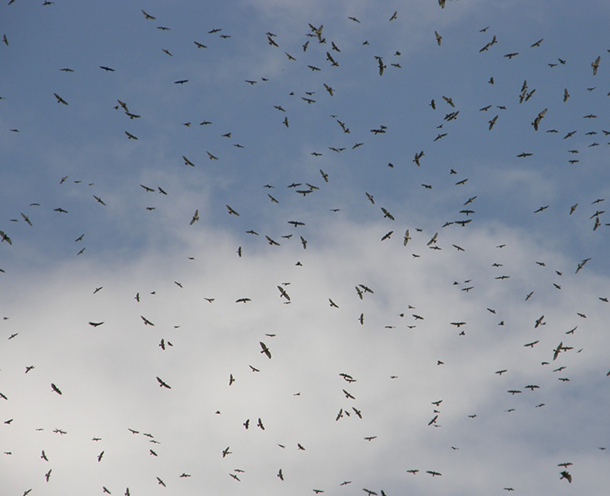 In Living on the Wind: Across the Hemisphere with Migratory Birds, author Scott Weidensaul describes watching hundreds of thousands of raptors circling on columns of rising warm air. (Photo: BGV23; CC)

In September, migrating hawks, turkey vultures, and kestrels flood the skies above Veracruz State in eastern Mexico. Michael Stein shares an excerpt from Scott Weidensaul’s book Living on the Wind: Across the Hemisphere with Migratory Birds, as Stein witnesses hundreds of thousands of raptors on the wing.

CURWOOD: Well, the changing weather is already affecting the natural world and that includes birds and their migrations, with some species starting earlier or staying later. But in the right place at the right time, you can see the most spectacular sights – as Michael Stein tells us in today’s BirdNote®

Counting a Million Raptors Over Veracruz

[Musical selection from “Tree of Life” by Nancy Rumbel]

STEIN: In September, a river of raptors flows through Veracruz State in eastern Mexico.
In his book, Living on the Wind, Scott Weidensaul [WHY-den-saul] describes counting the birds there as they circle in “kettles” on columns of rising warm air and then drift steadily south.
[narrator reads from Living on the Wind]
“Nothing in a lifetime of birdwatching had prepared me for this spectacle. The kettles grew to almost frightening proportions, twenty or thirty thousand hawks in each one.” 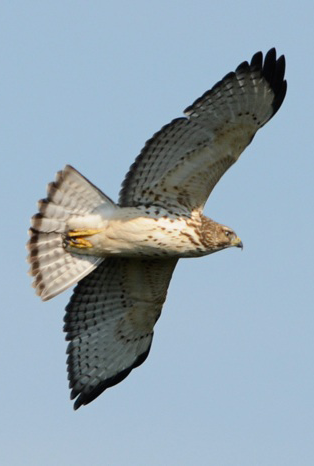 STEIN: “From two to three o’clock we counted 126,516 broad-winged hawks, nearly 46,000 of them in one ten-minute period. The next hour there were even more, along with nearly 11,000 turkey vultures. A steady stream of kestrels was moving low along the horizon, passing at a rate of five per minute, their wings flashing in the sun like a thin reflection off the distant Gulf."
“And so it went for hours. From our hot, dusty rooftop in Cardel, we had counted more than 435,000 raptors. As our sense of numbed disbelief gave way to comprehension, we realized we had witnessed – by far – the heaviest hawk migration ever recorded, anywhere in the world.”
Since that day in 1992 the record has been far eclipsed. Some days more than a million birds have been counted passing through the narrow, vulnerable corridor of Veracruz.
I’m Michael Stein. 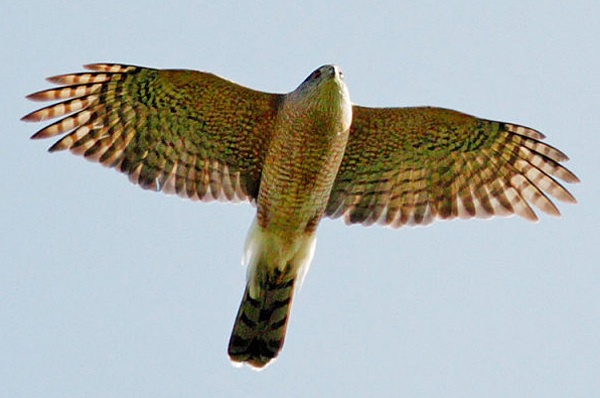 In September, a “river of raptors” flows through Veracruz State in eastern Mexico. (Photo: Courtesy of Tom Grey)

Today’s show brought to you by the Bobolink Foundation. Find a link to Weidensaul’s book at birdnote.org.
Written by Todd Peterson
“Tree of Life” composed and played by Nancy Rumbel; album Notes from the Tree of Life, Narada, 1995.
BirdNote’s theme music was composed and played by Nancy Rumbel and John Kessler.
Producer: John Kessler
Executive Producer: Chris Peterson
© 2014 Tune In to Nature.org September 2014 Narrator: Michael Stein

CURWOOD: And to find some picture of the raptors that gather over Veracruz – soar on over to our website LOE dot ORG. Coming up: Writer Naomi Klein on why climate change changes everything—including economic growth and capitalism. That's just ahead on Living on Earth – stay tuned.

Living on the Wind: Across the Hemisphere with Migratory Birds by Scott Weidensaul