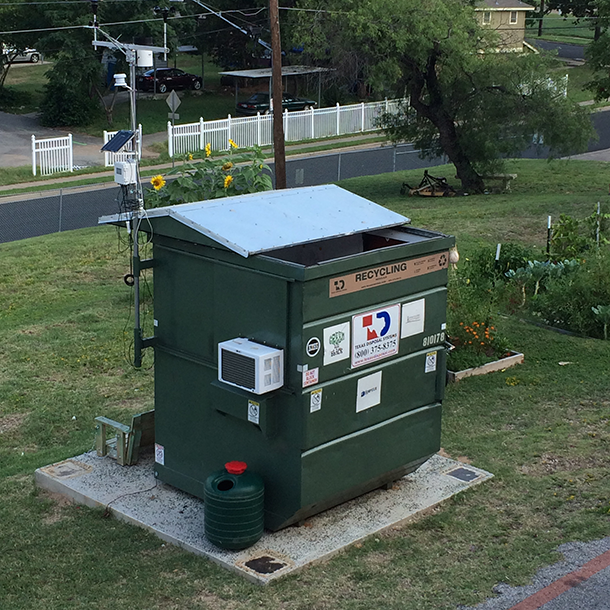 At Huston-Tillotson University in Austin, Texas an environmental science professor teaches sustainability by example, transforming an empty dumpster into a tiny apartment where he’s lived for a year. Professor Jeff Wilson tells host Steve Curwood about life in his micro home and his long-term goals for Project Dumpster.

CURWOOD: Oscar the Grouch lives in a trash can. So did Popeye the Sailor Man, but it’s hardly the kind of home you’d expect for a college professor. Yet Dr. Jeff Wilson, aka Professor Dumpster, is teaching sustainability by downsizing his living quarters to the dimensions of a dumpster – a clean dumpster, mind you. Jeff Wilson joins me now from his steel abode on the campus of Huston-Tillotson University in Austin, Texas, where he’s Dean of the University College and teaches environmental science. Welcome to Living on Earth, Jeff, or, do you prefer, “Professor Dumpster?”

WILSON: I’ll take Professor Dumpster and you’re at my disposal.

CURWOOD: [LAUGHS] Right now you're in your dumpster. What kind of headroom do you have?

WILSON: Well, it's a standard 10 cubic yard dumpster, which means it's six foot by six foot at the base. And this one's actually quite tall; it's about seven feet. 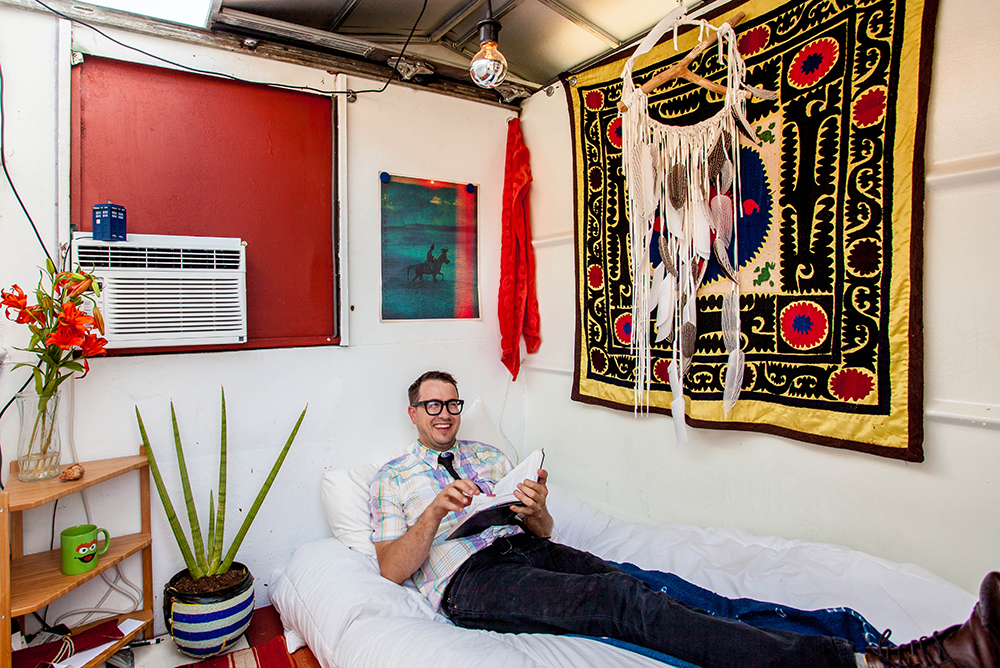 CURWOOD: I have to say, it doesn't sound like you're in a metal box. What creature comforts are there with you in dampening the acoustics?

WILSON: Right. We're actually in the second phase of this experiment turning it into an average studio apartment. First of all, I've got a wooden false floor, so the actual height of standing room is about 6'2" right now. I've got a window unit air conditioner. I have a few tapestries hanging on the wall. I have a twin bed and then a very small bookshelf on the corner with various things like an Oscar the Grouch mug and a Dr. Who Tardis.

CURWOOD: You moved into your dumpster about a year ago. How come?

WILSON: So the main point of this entire experiment is to test if one can have a pretty good life on a whole lot less. This is obviously an outlier, an extreme example of that. I've moved into 36 square feet, which is 1 percent the size of the average new American home today, so that’s the ultimate goal of this. A lot of people asked why we used a dumpster instead of a tiny house or instead of even a container, and the reason we did that were some of the awareness and educational aspects of this project around addressing waste. And dumpsters, you know, are these magical boxes that we put our waste into and come back a few days later after a little bit of noise in the middle of the night, which I'm very aware of at this point, [LAUGHS] that garbage truck noise, and everything's disappeared. So we want to highlight some of those subjects as well. 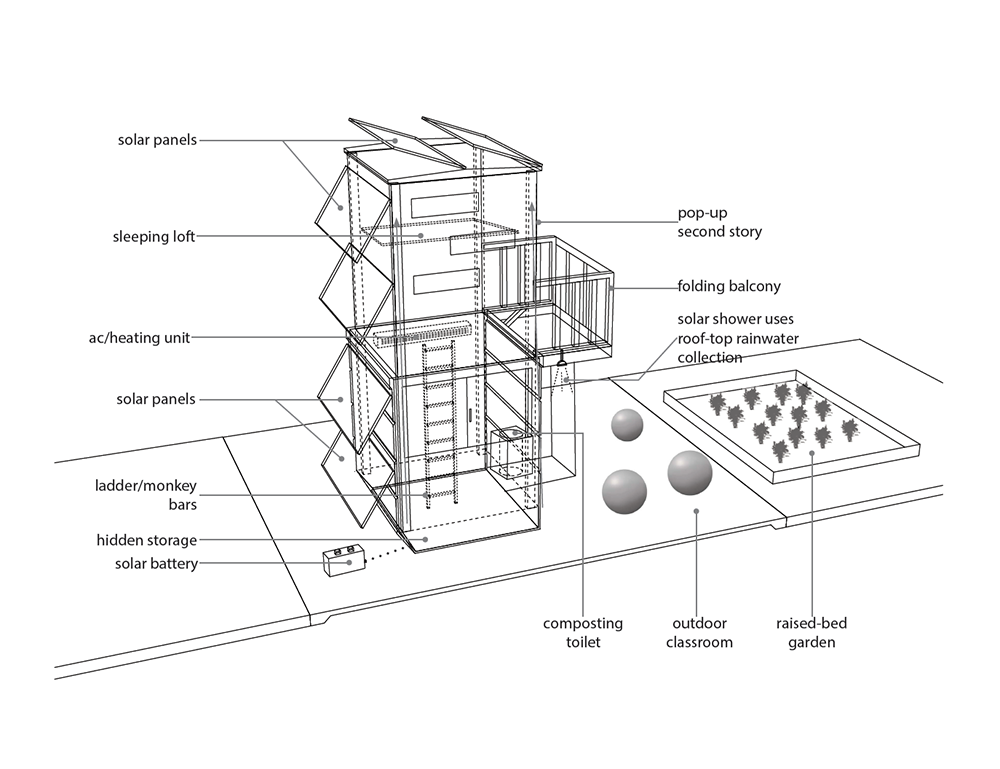 Dr. Dumpster plans to amp up his sustainability project this winter by adding amenities such as a second story, solar panels and a composting toilet. (Photo: Jeff Wilson)

CURWOOD: By the way, what risk do run from, you know, the odd garbage truck seeing the dumpster and figuring maybe it'll dump you?

WILSON: There is a bit of confusion, especially since all the dumpsters are still labeled no entry for humans. We have a few safety features, so that I'm not serviced. We have welded shut the front pockets, they usually pick up dumpsters with. And there also happens to be a weather station on this dumpster, so even the new guy hopefully won't mistake this dumpster for a normal trash dumpster.

CURWOOD: Now, I'm looking at a drawing from your website entitled, "Early thoughts on proposed designs." Let's see, there's solar panels, a sleeping loft, air-conditioning and heating, a water collection system, even a folding balcony. To what extent have you actually transformed that 36 square feet of metal into home sweet home? 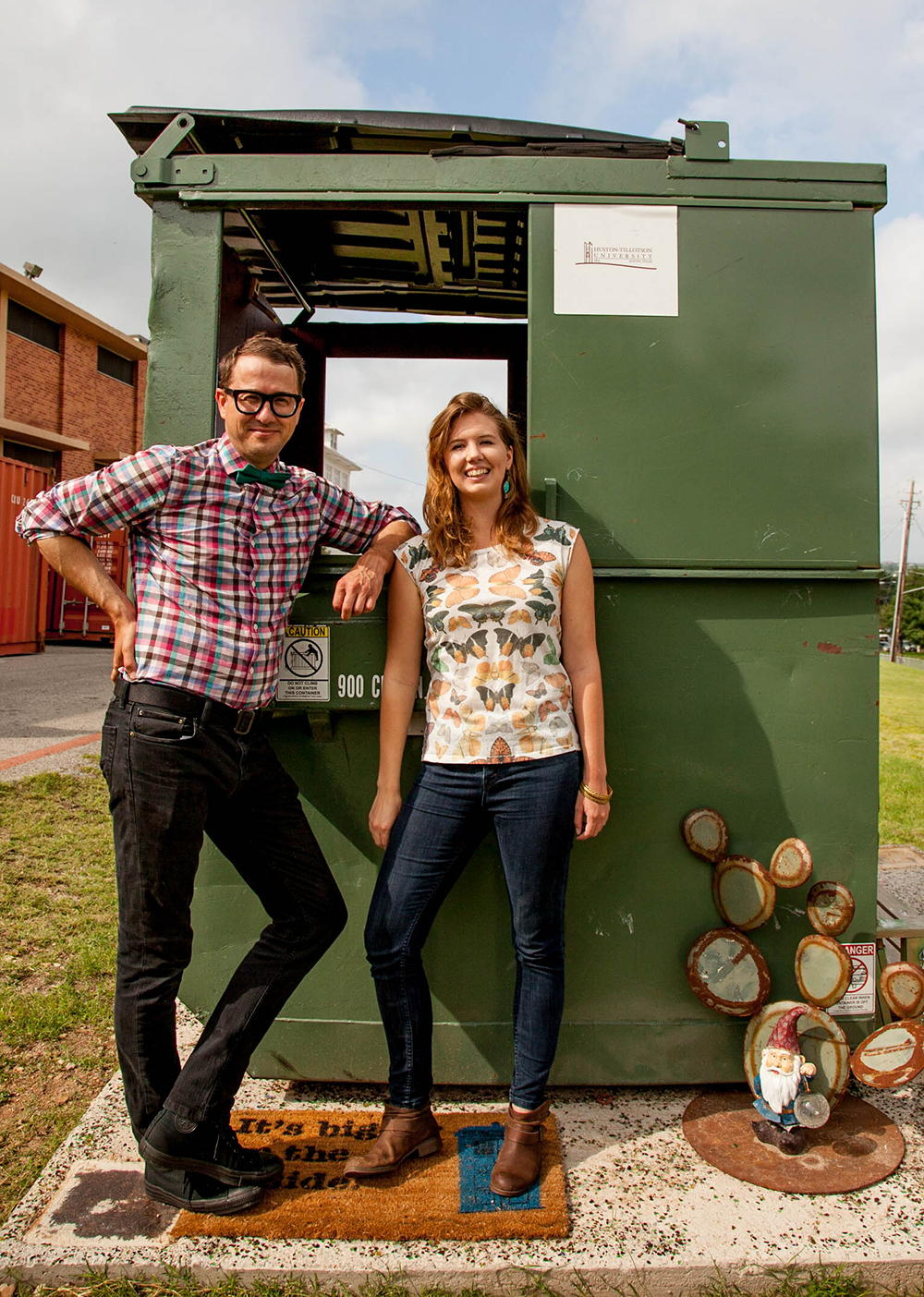 WILSON: What we're going to do in this phase is try to make this into an average American home using normal appliances. So we're going to get a fairly normal toilet, shower head; we'll probably expand out a few of the walls to give us a little bit more space to do this. The spec that you're looking at is actually the third phase, what we call the "uber" dumpster, and in his phase we're going to use all the baseline data that we collected using the normal sort of stuff. In this third phase we're going to utilize solar and lower-flow type equipment so that we can hopefully get to 1 percent the usage of energy and water, and 1 percent the creation of waste of an average American home.

CURWOOD: So what about Mother Nature? I mean, particularly what do you have in the way of plumbing?

WILSON: This is a particularly difficult issue to deal with. Not only is it not a lot of fun urinating into a bottle when it's an emergency, or running to the nearest building in the middle of the night; it's also a problem in terms of design: dealing with waste in a healthy-type way, and also one that doesn't give off much of a fragrance in such a small space, but also by coding regulation. In Austin, it's currently not legal to have a composting toilet. What we are probably going to have to do is, you know, attach something to the outside of the dumpster or expand one of the walls and just capture that blackwater like in an RV. 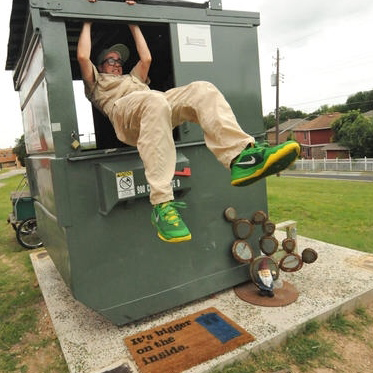 Egress from the dumpster can be challenging. (Photo: Jeff Wilson)

WILSON: Well, we did quite well in the first phase because we weren't plugged into water or electricity for the first six months. The only issue is that it wasn't exactly that comfortable. When I'm moved in February we had three, what they call at least in Texas "snow days" meaning that it got below about 35 degrees, and generally the temperature in that phase inside, was the temperature outside. What we hope to do, not only looking at newer technologies for using less water and energy and things like solar, but also thinking a little bit more carefully about what sort of activities we use water and energy for. Most people, sort of, when they move to a smaller house,or move to a tiny home, one of the things they notice is that they spend a lot more time outdoors and a lot more time in the community. And one of the things we're interested in is the increased interactions with the community and the environment when you're in a smaller home like this, sort of what that might do for one's sort of quality-of-life and sense of experience and just the overall magic that is brought into the everyday. If you want to call it dumpster magic.
[LAUGHS] 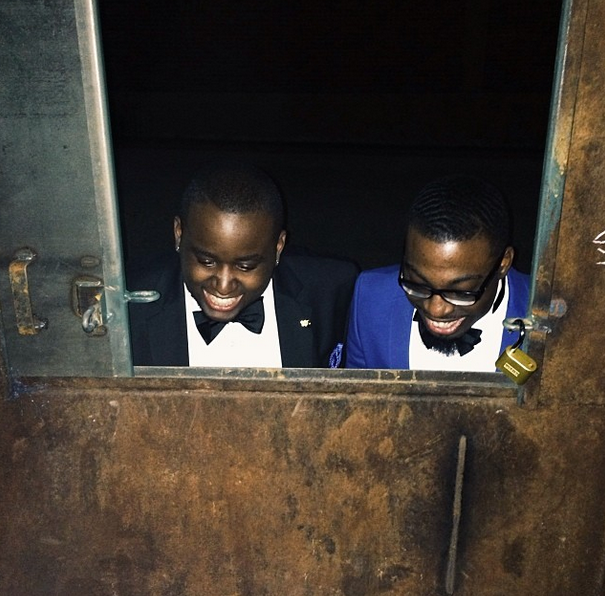 CURWOOD: Well, you certainly sound like a friendly guy, and I'm sure that you have friends, lovers, perhaps. So what kinds of guests do you have at your dumpster?

WILSON: [LAUGHS] Well, I'll start with the latter one. I did have a girlfriend at the beginning of the experiment, and it seems that she is still around at least in the last coupleof days. And a lot of people do ask if you know this is the type of experiment that attracts the ladies, and I'll say that's a definite no. I do have frequent guests here; I don't stay in the dumpster when I have these guests—and these are generally students or couch surfers. I've had people from several continents couch-surf in the dumpster; we’ve got a very special guest on Thursday, I actually have the CEO of “couch-surfing” itself, dumpster-surfing.

CURWOOD: And as for your girlfriend so far she hasn't dumped you.

WILSON: So to speak and I refrain from calling her a trashy chick.

CURWOOD: So your goal for dumpster dwelling goes beyond just spending a year in a small space, it's all about educating through this project dumpster. So what do you hope to accomplish?

WILSON: In the short-term, we've really got sort of a Zen, in the moment thing going on. We're looking to reach out to the public and reach out to our students for ideas such as ideas on this toilet. It's one of the biggest problems. I mean, the idea of a toilet, the pure ridiculousness of it—that you've got to have this big piece of porcelain; you've got to have a whole sewage system. You've got to have a couple gallons of fresh water. These are some of the things that I think we're able to attack in a very small way. I mean, ultimately what this experiment is all about is not just can you be happy on a lot less, but I like to think of the dumpster as a conversation box, and as long as a conversation continues to go on, whether it be about sustainability, climate change, tiny homes or whether it be—as some have suggested Obama's new housing plan—as long as that conversation's going on and people are talking about it, I think we'll have accomplished our goal.

CURWOOD: Professor Jeff Wilson teaches Environmental Studies at Houston-Tillotson University in Austin, Texas. Great talking to you from your dumpster. I hope you'll bring it to Boston and invite us for dinner, or maybe even a sleepover.

WILSON: Hey, Boston or Austin, mi dumpster es tu casa, so just let me know next time you’re around and when we're in Boston we'll drop by.

CURWOOD: [LAUGHS] Thank you so much.

More on issues and obstacles faced by Professor Dumpster http://www.theatlantic.com/features/archive/2014/09/the-simple-life-in-a-dumpster/379947/