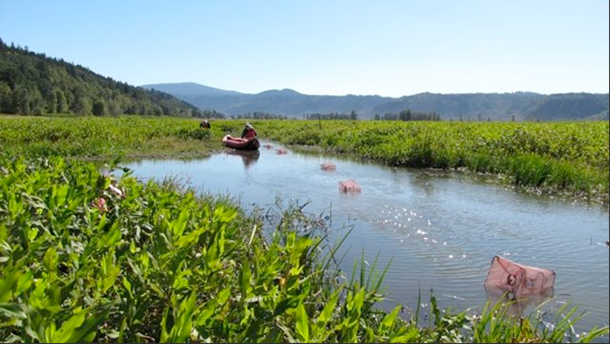 Scientists with the U.S. Geological Survey gather samples near coal train tracks in the Columbia Gorge near Washougal, Washington. Little research has been done on how coal interacts with the environment. (Photo: Ashley Ahearn)

With recent proposals to bring coal by rail through the Pacific Northwest for export to Asia, some scientists worry that coal dust containing mercury might contaminate Washington’s wetlands, threatening wildlife. Reporter Ashley Ahearn treks through marshes and muck near railways with USGS scientists as they look for coal’s potential impacts on wetland ecosystems.

CURWOOD: Of course, coal is a big driver of the warming of the world and its oceans, and while we are using less of it here in the U.S. these days, we still plan to export more coal to Asia. That means transporting it by trains, as we’ve done for decades, but there’s very little research on the effects coal has on the environment when it escapes from coal hoppers bumping along the rails. With two large coal export terminals proposed for Washington State, a federal agency is hoping to add good science to the debate over the risks of coal train dust. From the public media collaborative EarthFix, Ashley Ahearn has our story.

AHEARN: This is the sound of wetland science.

BLACK: I’m pulling a two-person inflatable kayak that I suspect weighs about 80 pounds by itself, and then there’s gear in it. And I’m old. [LAUGHS] 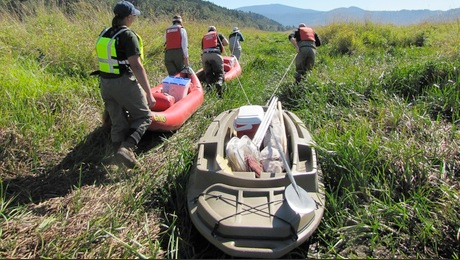 Scientists from the U.S. Geological Survey head into the marshes of the Steigerwald Wildlife Refuge near Washougal, Washington to learn how coal dust from trains might impact the environment. (Photo: Ashley Ahearn)

AHEARN: Bob Black is the lead researcher on a new study being done by the U.S. Geological Survey. The USGS is wading into the controversy over coal trains and coal terminals in the Northwest.

AHEARN: Black and his team are gathering samples from this stretch of marsh, sandwiched between the Columbia and train tracks, just across the river from Portland.

AHEARN: An orange BNSF engine squeals by a little more than 1,000 yards from the scientists as they prepare fish traps and other sampling gear.

AHEARN: Right now only one or two coal trains come through here per day, but if the proposed coal terminals are built in Longview and near Bellingham, Washington, that number could rise to more than 20 trains per day.

AHEARN: Black acknowledges that this is a tricky issue, but he says his job is to check all personal opinion at the door and just get down to the science.

BLACK: We have to be as unbiased as we possibly can be. So I understand people’s concern, but our role here is to try and see if the science supports those concerns or not.

AHEARN: Coal contains mercury, arsenic and other metals, but scientists don’t know whether those contaminants are easily released from the coal when it gets into the environment. So this team is gathering samples at two sites here – one closer to the tracks, and the other farther away. They’re looking for potential signs of coal pollution in the food chain – from fish to dragonfly larvae. 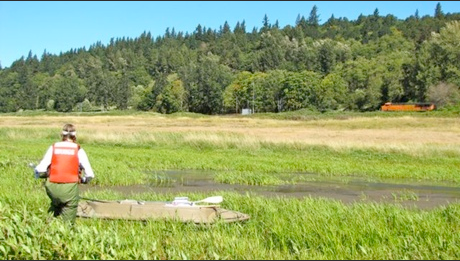 Right now, roughly one coal train per day travels along the Columbia River and north through Seattle to service a Canadian coal terminal, but that number could jump to more than 20 trains per day if terminals are built near Longview and Bellingham, WA. (Photo: Ashley Ahearn)

EAGLES-SMITH: You can see it trying to bite me.

AHEARN: He holds one up to inspect before putting it into a plastic baggy to take back to the lab. It looks like something straight out of the Alien movies.

EAGLES-SMITH: These guys cling on to plant matter, and they kind of lie in wait. And then when a food item comes by, it kind of jumps out with its arms and grabs them.

AHEARN: Dragonfly larvae are voracious predators, and they live in the muck for several years before turning into adults. That means they have a lot of time to accumulate mercury, and then potentially transmit it up the food chain to the frogs, birds and fish that eat them. 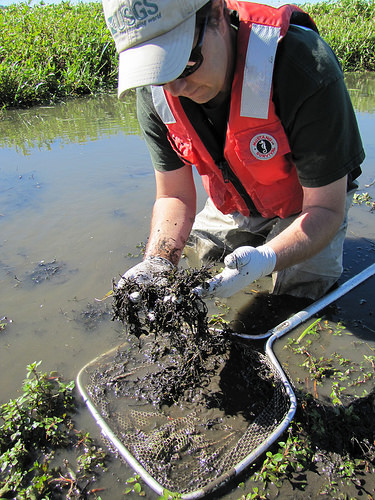 AHEARN: Wetlands can be stinky places. Eagles-Smith says that rotten egg smell we associate with mucky spots like this one, is a sign that tiny organisms are doing their duty, breaking down organic material. And they might do the same thing for coal - releasing the mercury from the coal, into the food chain.

EAGLES-SMITH: I like to think of it as activating the mercury, and it makes it more biologically active, more toxic.

AHEARN: But the scientists don’t know for sure if that’s happening here. The USGS will detect any mercury in the dragonfly, fish and muck samples they gather today. Then they can examine the mercury’s isotopic fingerprint to try to figure out where the mercury came from.

AHEARN: It’s no easy task. Mercury can travel in air pollution for thousands of miles. Some research has traced mercury pollution in the U.S. to coal that was burned in Asia. But scientists want to know if coal trains that pass through wetlands like this one might serve as a sort of direct deposit of mercury pollution.

BLACK: There are multiple locations through the Northwest where tracks are near water, so it should be a concern, something to consider in more than in just a few locations.

AHEARN: Black says The USGS hopes to have results within the next six months. They’ll be sharing their findings with the state and federal agencies that are studying the environmental impacts of the two proposed coal terminals in the Northwest. I’m Ashley Ahearn in Washougal, Washington.