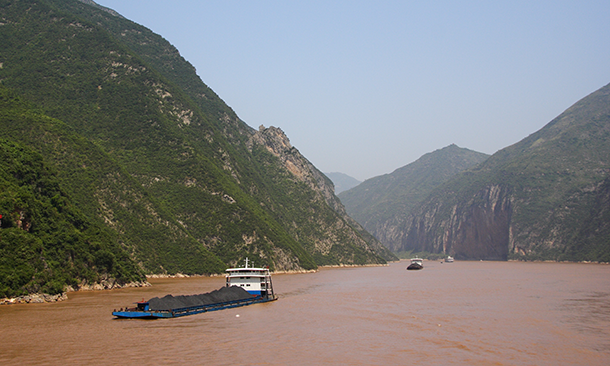 Transporting coal down the Yangtze River in China. (Photo: BigStockPhoto)

CURWOOD: Well, as Dabo Guan says, air pollution in many Chinese cities is a public health crisis, with dangerous smog and particulates way beyond safe levels. The Chinese government has begun moving power plants away from population centers, and making massive investments in solar and wind power. And now, as co-authors Jaeah Lee and James West detail in the current issue of Mother Jones Magazine, China has put a lot of cleaner-burning natural gas in its five-year plan, and is looking to the U.S. for fracking technology. James West joined us on a line from his office in San Francisco.

WEST: China's getting involved in fracking by firstly, this kind of top-down approach. In their latest national plans, they have an aggressive goal to create a certain amount of shale gas by a certain year, by 2020. It's a really big goal, it's twice the rate of the way the U.S. first started their industry, so it's fast. They're really pushing for this to happen.

CURWOOD: I take it the attraction for China for shale gas is that when you burn it, it doesn't spit out the particulates that you got from coal. 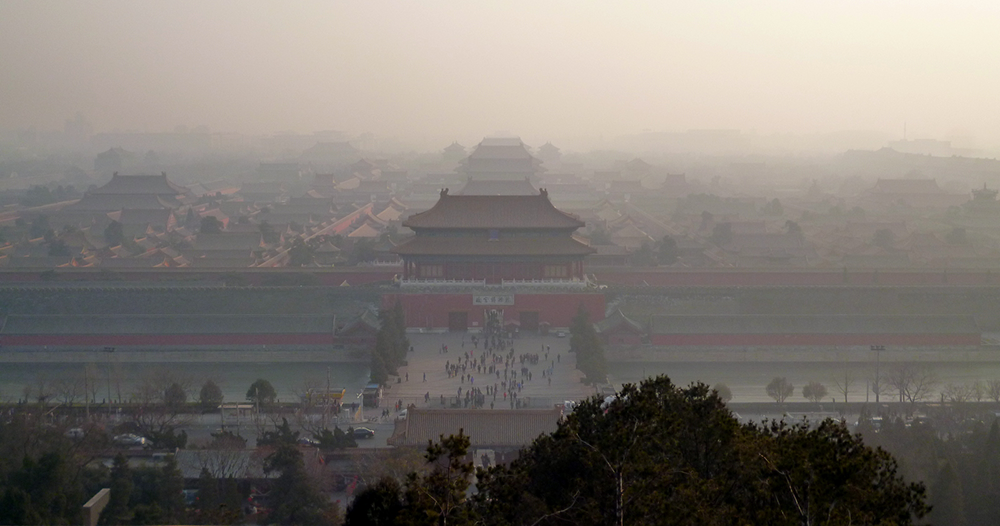 WEST: That's exactly right. We saw coal plants in the dozens spewing out these particulate matters, the main cause of smog across China. Fracking causes far less of that, and so that is a huge appeal to the Chinese government right now. It could potentially have an enormous source of cleaner fuel, not just for this particulate matter that causes smog, but also for greenhouse gases. As we know, there's an ongoing debate about the level of greenhouse gases that fracking itself produces, and whether or not methane, which is a byproduct of the fracking process and can leak out of the pipes in the fracking process itself—that's a very potent greenhouse gas. And there's an ongoing debate about how potent and whether or not it's worse or better than CO2 emissions from coal burning. But at this point, the Chinese government is putting all its cards on the table and going, "We're going to play them all at once," and certainly this is one of them in the hopes that their huge reserves of it will potentially prove to be much cleaner than coal.

CURWOOD: And just how big are China's shale gas reserves?

WEST: They're bigger than in the U.S. They are the biggest in the world. They have two major shale gas basins in China, one is in the Sichuan province, which is, I guess famous in the rest of the world for its spicy food and its pandas…

WEST: ...and also in the vast Northwest region of China, which is home to the Uighur minority. And they haven't begun fracking there so much because there’s quite a lot of political instability in that area and not a lot of water. So they're really focusing on the Sichuan basin. It's a remote farming providence, very poor, very rural, full of villages that have largely remained untouched by China's very rapid modernization.

CURWOOD: Now, hydraulic fracturing to get shale gas, to get natural gas, is super high tech—a lot of fancy equipment the United States was developed to make all that possible. How are the Chinese doing with the technological challenge here, and what role are U.S. companies playing in helping the Chinese extract natural gas through fracking? 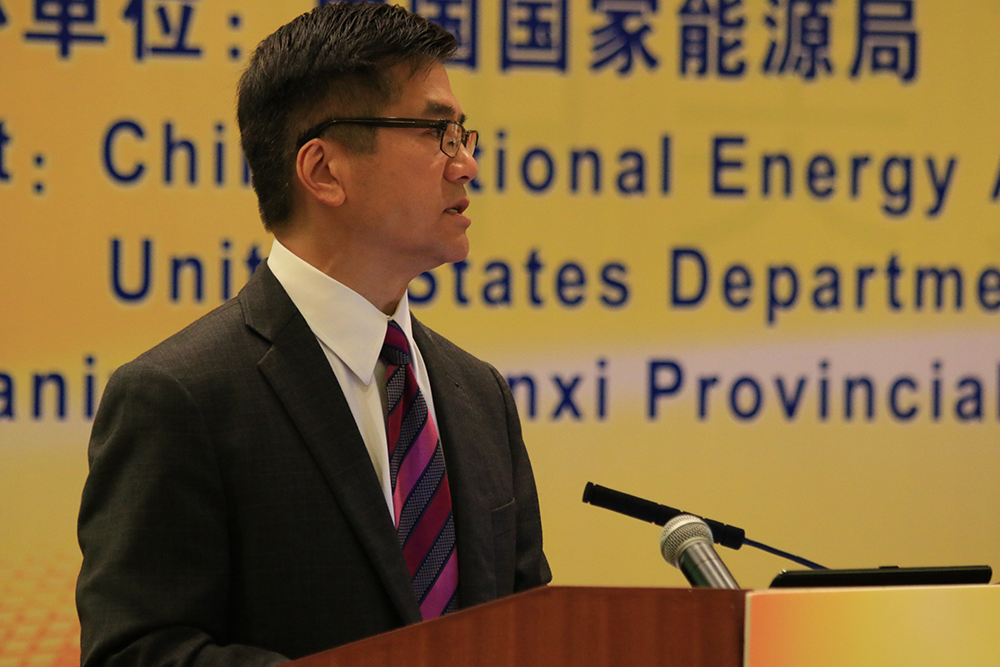 WEST: This part of the story is actually quite eye opening, I think, personally. We had exclusive access to this conference where we saw top-level Chinese officials interact with U.S. counterparts from the State Department, from trade, from commerce, these people who had providing entrées to the CEOs of Halliburton and Chevron and Exxon to really hammer out these deals between frackers in China and frackers in the U.S. They are talent-sharing, skills-sharing, performing the function, not only of providing money, but also expertise—and that's the thing that China so desperately needs. They don't know how to do it and are asking the U.S. to help. The shale reserves in China are deeper and more complex than the ones that provided the boom here in the United States. And so there's a few tricky things to iron out, and so, that expertise, they're counting on it, and the U.S. is giving it in spades.

CURWOOD: Now the power plant emissions regulations that the Obama administration is rolling out really favor natural gas here in the U.S. To what extent do you think that the administration, the White House, is trying to promote this industry at home and abroad? 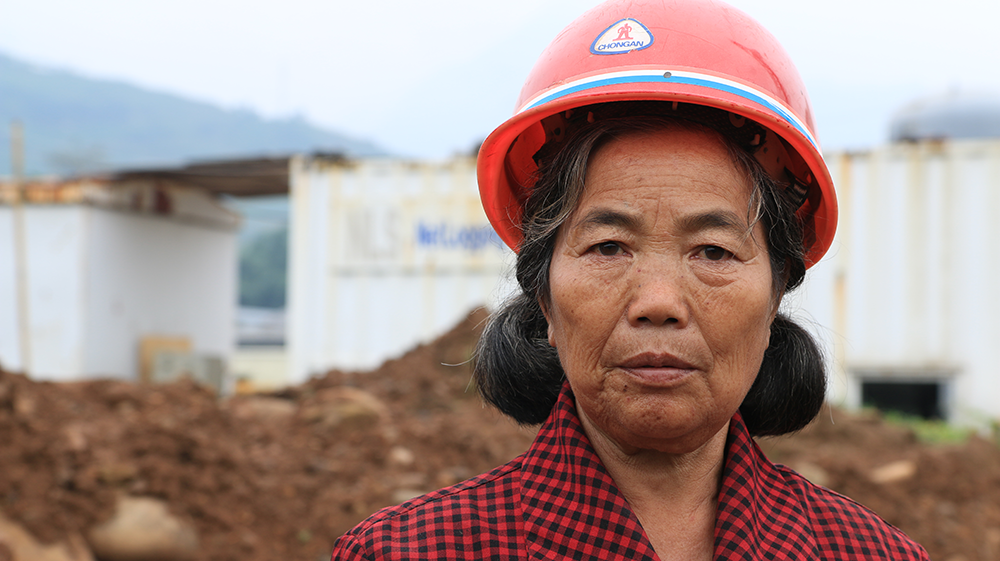 WEST: Yeah, I think we've begun to see evidence that, particularly under the Hillary Clinton State Department, that this is something that the United States is directly exporting to foreign governments at this point. We saw the then U.S. Ambassador, Gary Locke, directly talking about the U.S. efforts to spread that technology around the world in particular to China in this case. So yeah, you're absolutely right. This is something that they have almost branded as U.S. know-how. The way we heard it described is, what's good for America in terms of business is also good for China in terms of learning, but also that an energy independent China is a secure China—one that stays within its borders potentially. One that doesn't have to look into the South China Sea, doesn't have to be a kind of aggressive geopolitical force in Southeast Asia. The way it was described to us is, that's a good thing for the United States as well. 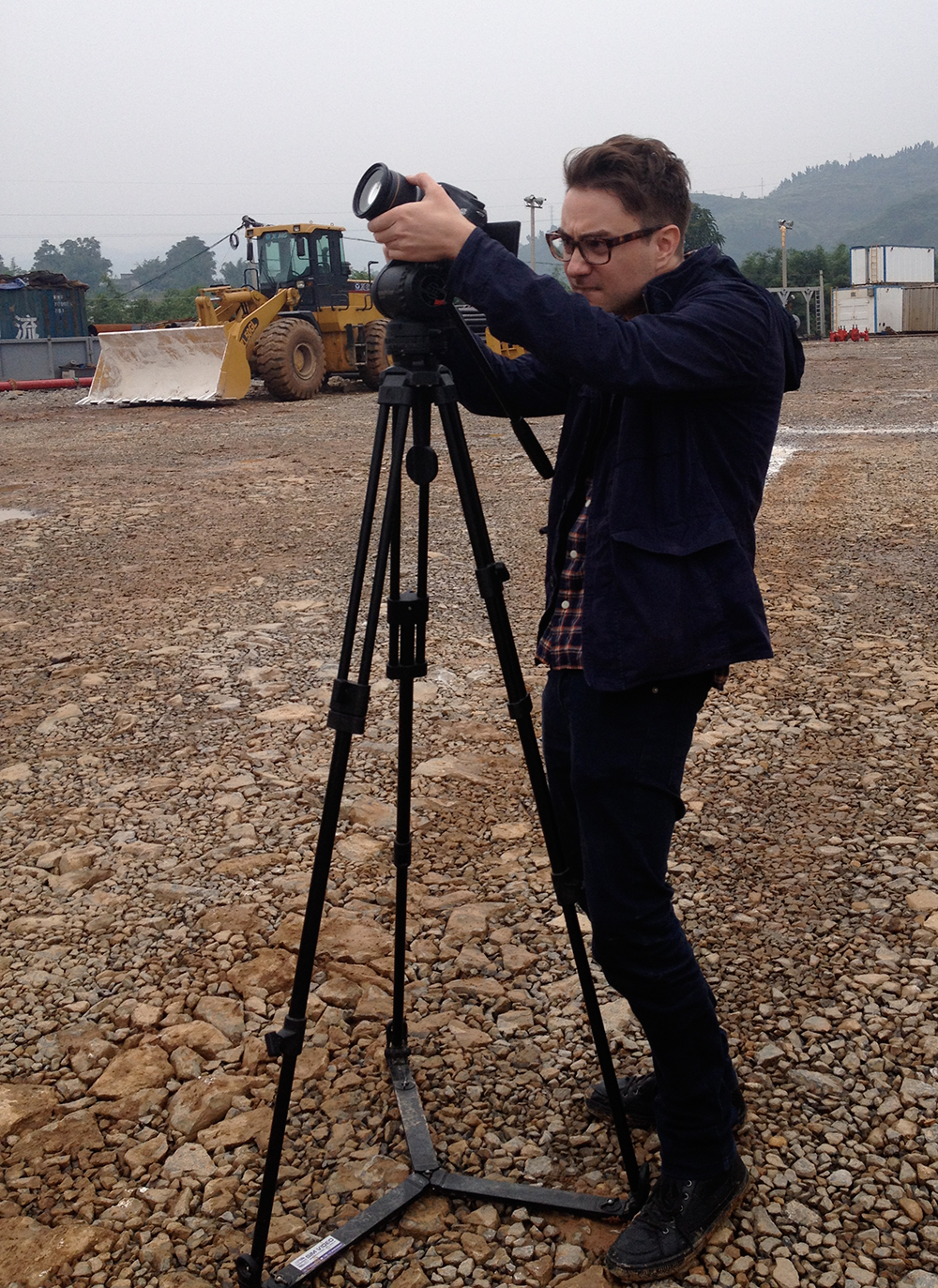 WEST: At the moment, there seems to be enough water in Sichuan province where we were, for the scale there right now. It's quite a fertile area. It feeds the Yangtze River basin. But really the main worry is not necessarily where the water is coming from in Sichuan, it's where the wastewater is going. We saw this fracking wastewater site that was 100 feet, maybe less, from a tributary of the Yangtze River, and you can imagine during a downpour all of that water going straight into the Yangtze River. And so you began to see this kind of capsule of a bigger problem. If they were to expand rapidly, which is their plan, then is this what we're going to see across the Yangtze River basin? And you can anticipate that's going to be a major headache for the entire area if they do get on top of it right now.

CURWOOD: What folks in Sichuan are concerned about water issues?

WEST: Yeah, we spoke to a number of people that were explicitly concerned about the water quality after the frackers had come in. Most all of them said that mysterious stuff started to come up in their water. And not only that, but their groundwater had begun to become depleted after the fracking industries had come in. We spoke to one woman who said that ever since they came in, set up the well, and left, they have no ground water whatsoever. They had to start carrying in water from a neighboring village.

CURWOOD: We have some audio of this woman talking about these water issues. What's her name Daijong Fu.

WEST: This is Daijong Fu. She's a local in Sichuan that we met outside of a gas well, and she says that the groundwater just hasn't been the same since the frackers left.

FU: [speaking in a Chinese dialect and translated] We can't even use the water to cook rice anymore. Now when the kids come back from the city, they bring us bottled water. We have to use boiled mineral water mixed with powdered milk to feed the kids. No water. So nothing we can do. People from the well site came often. They even brought boxes specifically to take water samples for testing, but there's been no results. 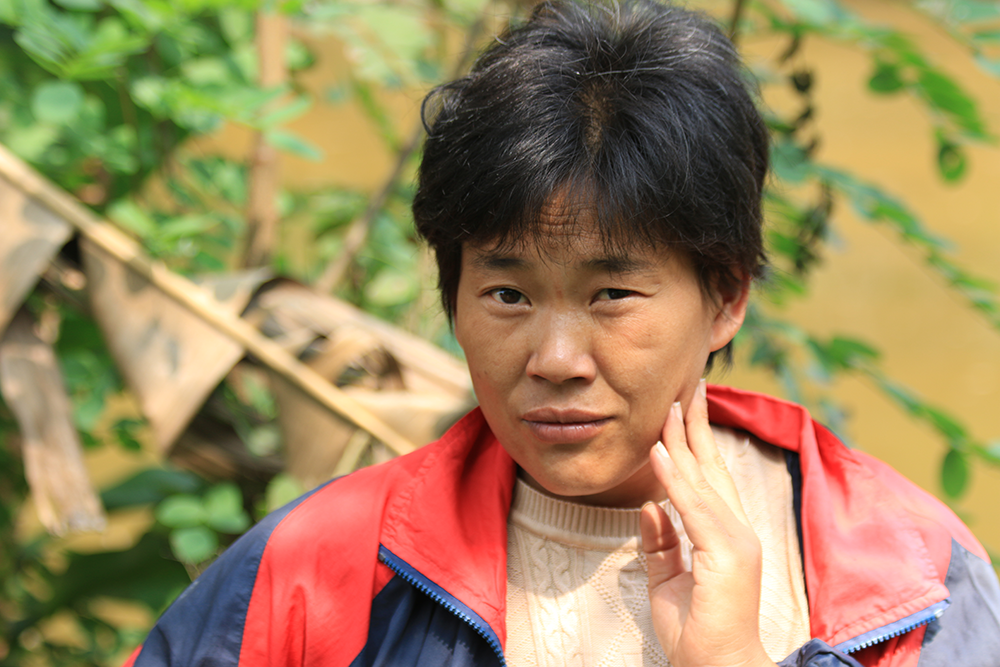 Dai Zhongfu, a woman from Sichuan Province, says her water has been contaminated by fracking. (Photo: James West)

CURWOOD: James, the other day, it seems like China is really in a bind here. We've got serious public health problems related to the particulates from firing coal, but fracking for natural gas is raising questions around water quality. It seems like they're between a rock and a hard place here.

WEST: Yeah, and you know this is what really scrambles everyone's ideas about how potentially easy progressing to renewable technologies could be in the west, or climate action in general in the west. I think when you go to China, it's such an environmental emergency, 70 percent of their energy comes from coal. They're the biggest consumer, the biggest producer of coal. And so, what do they do? It's a different algorithm to work through than what goes on here in the west. You can feel one way about fracking here, but I think you kind of have to feel a different way in China, and my personal opinion from reporting there is that I didn't really come away with a sense of, they should or they shouldn't, really. Are the U.S. companies playing an important role in making it the safest it could possibly be? Yes, but we know that in the states where they can take a shortcut they likely do. So in a country where everything is a shortcut, could it be a potential race to the bottom, you know? And I guess we don't have answers to that. We are sort of mapping out this sort of vibrantly new field of industry there. The locals don't know what's going to happen; the people doing it don't know what's going to happen. But all we know is that China has to do something and do it fast in order to prevent a bigger crisis from happening. And you know, the world is waiting to see. China is the biggest emitter of greenhouse gases in the world, so we should be encouraged by their actions to embrace cleaner technology; we should also be vigilant about how they do it. And that was, I guess, my main take-out from the trip: be vigilant, keep watching, be confident but also be very wary.

CURWOOD: James West is a writer for Mother Jones and a producer for Climate Desk. Thanks for taking the time with us today, James.


Check out the original story here. Produced by Jaeah Lee and James West