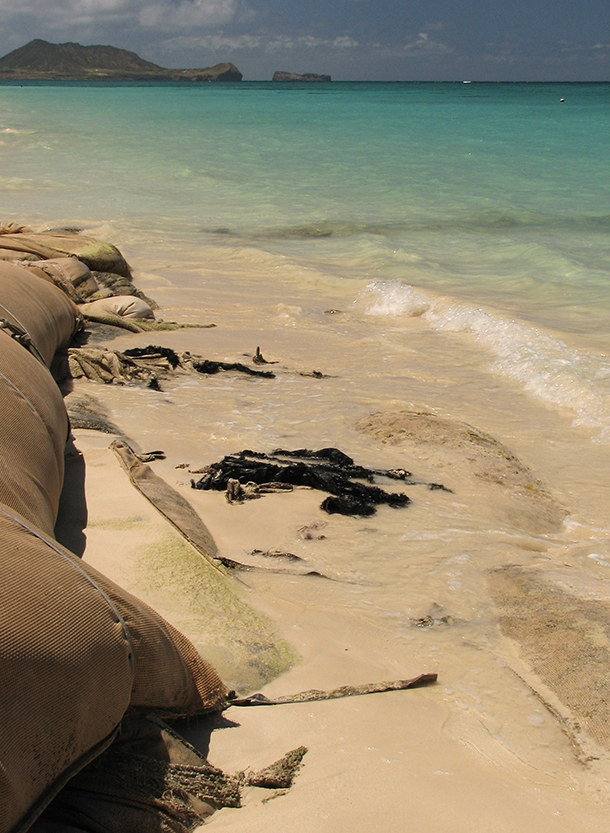 Beach erosion is a consequence of the worldwide building boom. Sand is required to make concrete, and its mining is happening faster than beaches can naturally be replenished. (Photo: Sarah Kim; Flickr CC BY-NC-ND 2.0)

In this week’s trip beyond the headlines, Peter Dykstra tells host Steve Curwood about stolen beaches, and the impact of the NAFTA trade agreement two decades later.(

CURWOOD: It's Living on Earth. I'm Steve Curwood. Time now to catch up with Peter Dykstra. He’s the publisher of Environmental Health News, that’s EHN.org and DailyClimate.org. He’s on the line from Conyers Georgia. Hey, Peter, what did you turn up beyond the headlines today?

DYKSTRA: Well, hi, Steve. Y’know, we’ve talked here in the past about the sand wars associated with the boom in fracking. Since you need silica for the fracking process, places like Wisconsin and South Dakota, and Texas have seen their own boom in sand mining, but elsewhere in the world, there’s something of a sand crime wave going on.

CURWOOD: Wait a second, I mean, sand has got to be one of the most cheap, common resources out there. What makes it valuable enough to cause a sand crime wave?

DYKSTRA: In places like China and Brazil and India, there’s an unprecedented building boom. That building boom needs an unprecedented amount of concrete, and to make concrete, you need lots and lots of sand. The UN Environment Programme says we’re using 40 billion tons of sand and gravel every year, most of it for concrete, and sand is just as subject to simple economic laws as anything else. Demand goes up, the price goes up, and then people steal beaches.

CURWOOD: Whoa, and when they do, it’s not like we’re replacing those 40 billion tons of sand and gravel we’re taking.

DYKSTRA: Right, the German Magazine Der Spiegel covered this in depth. They reported on a situation in the Cape Verde Islands, where the beach sand is disappearing one bucket at a time. In one sadly ironic case, there was a town there, once protected by a wide beach, and now prone to high-tide floods. So, of course, they built a seawall.

CURWOOD: Out of concrete, I presume, Peter? Like they’re doing elsewhere because of rising sea levels?

DYKSTRA: Correct. So, let’s move off the sand-crime beat and on to some good news. 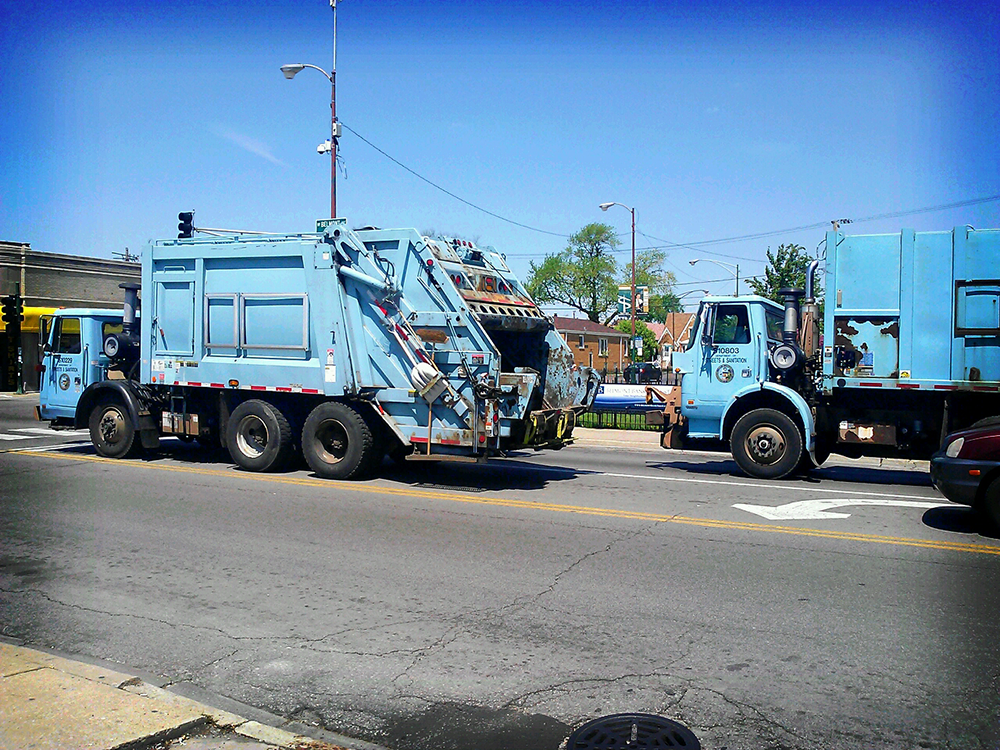 CURWOOD: Oh, good. Be my guest.

DYKSTRA: The garbage trucks that haul our household environmental messes away also leave a few environmental problems behind. Traditionally, garbage trucks are diesel trucks, belching smoke. Sometimes not doing much better than a mile per gallon of fuel, and making a tremendous racket that, depending on your garbage route, might be outside your door at four in the morning. But Chicago’s city fleet of garbage trucks is getting a little quieter with emissions-free, almost noiseless electric trucks.

CURWOOD: Silent, smoke-free trash pickup? How is this going to work?

DYKSTRA: Some have been in use elsewhere, but these would be the first electric garbage trucks in North America. Chicago’s conversion is only partial, initially 20 of their 600 trucks, and the electric ones cost more to buy, but it’s hoped they’ll save fuel and maintenance costs in the long run.

CURWOOD: Well, perhaps with some turbines we could have wind-powered garbage trucks in the Windy City, huh? OK, Peter, take us back through the annals of environmental history now. What’s on the calendar this week?

DYKSTRA: Well, if this is the age of government by soundbites, 22 years ago this week, we heard a soundbite for the ages and it came from H. Ross Perot, maverick businessman and really the most successful third-party Presidential candidate this country has seen in recent years. In a Presidential debate, Perot predicted that NAFTA, the free-trade agreement between Mexico, the U.S. and Canada, would result in – and here’s my best Ross Perot imitation – “A giant sucking sound.” That was his way of saying that free trade would pull American jobs to low-wage workplaces in Mexico. 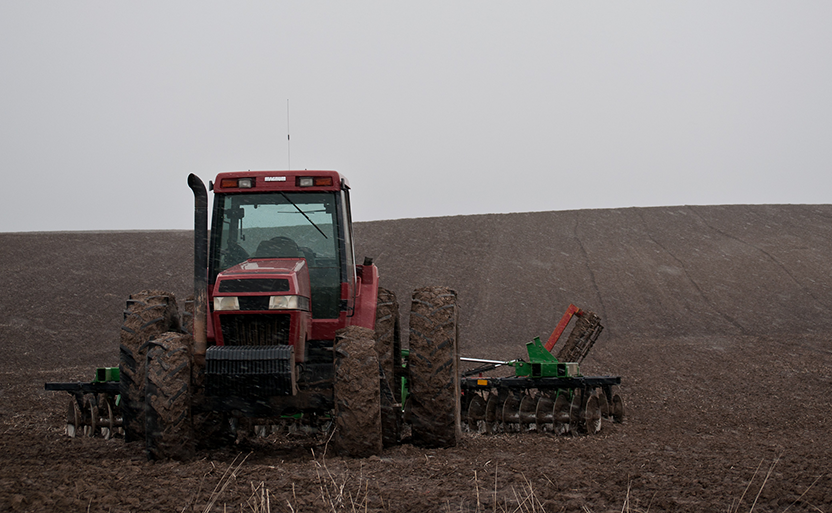 CURWOOD: And critics also said it would hurt environmental enforcement. How does it all look 22 years later, Peter?

DYKSTRA: Not so good. A report by nonprofit groups in Canada, Mexico, and the US, released earlier this year for the 20th anniversary of NAFTA taking effect, said the treaty is every bit the environmental disaster that was predicted. The agreement helped enable Canada’s single-minded pursuit of tar sands oil and the resulting Keystone pipeline controversy in the U.S., and in Mexico, NAFTA’s helped build huge mining projects and industrial-scale, pesticide-intensive farming.

CURWOOD: Well, so that’s the environmental side, but with other trade agreements taking hold around the world, how did NAFTA help in terms of economics?

DYKSTRA: NAFTA’s net economic impact has helped the bottom lines of Canada and Mexico, but at the expense of the U.S. The Census Bureau says the U.S. ran a $54 billion dollar trade deficit with Mexico, $31 billion with Canada last year. Communities throughout the so-called Rust Belt of the U.S. continue to lose jobs and struggle and wither, and here’s one of the oddest unintended consequences of NAFTA: All those industrial-scale farms in Mexico? They displaced small farmers, and many of those small farmers went north looking for work. And they became part of what is often called America’s immigration crisis. How’s that for full circle?

CURWOOD: Well, you got me scratching my head, Peter. Peter Dykstra is publisher of Environmental Health News – that’s EHN.org – and TheDailyClimate.org. Thanks so much, Peter. Talk to you next time.

DYKSTRA: Thank you, Steve. We'll talk to you soon.

NAFTA: 20 Years of Costs to Communities and the Environment

Trade in Goods with Mexico

Trade in Goods with Canada