Using An Oil Legacy to Save the Oceans 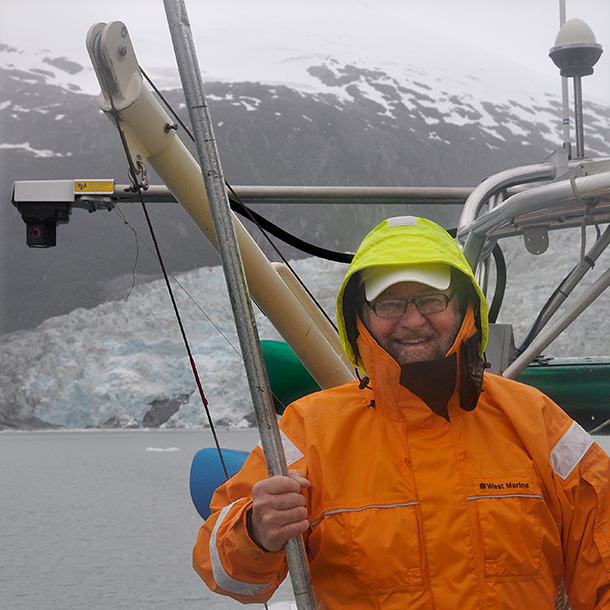 David Rockefeller Jr., grew up sailing and his love for the oceans spurred him to create Sailors for the Sea. (Photo: David Thoreson)

CURWOOD: Nearly 140 years ago, John D. Rockefeller, Sr. co-founded Standard Oil, which revolutionized the petroleum industry and helped build one of the largest family fortunes in US history. He also helped revolutionize philanthropy, creating, among other funds, the Rockefeller Foundation, now chaired by his great-grandson, David Rockefeller, Jr. David was also a member of the Pew Oceans Commission and is using some of his family’s wealth to help save our seas. Welcome to Living on Earth, David. 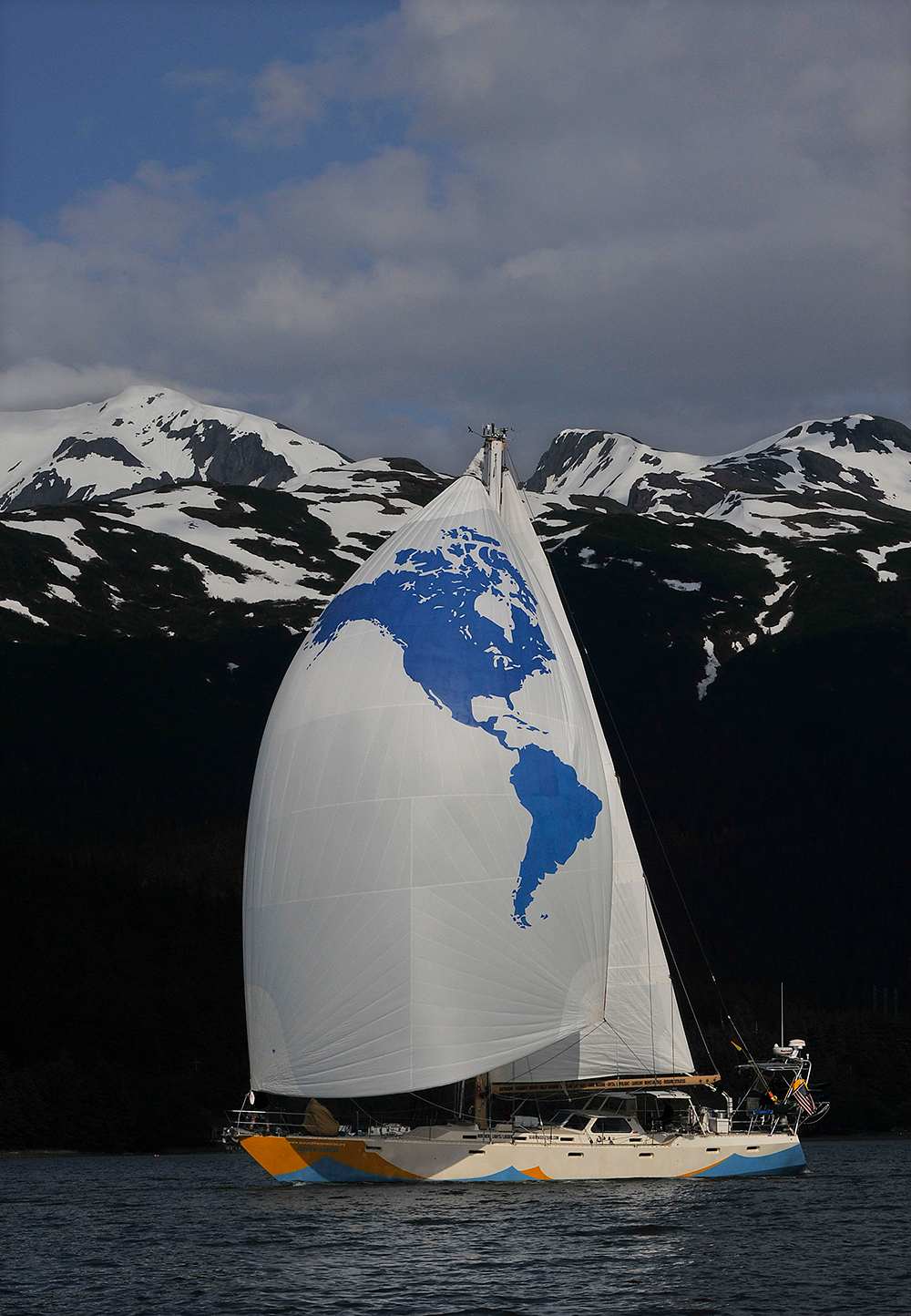 David Rockefeller, Jr. sailed on the vessel, Ocean Watch, during the Around the America's expedition. (Photo: David Thoreson)

ROCKEFELLER: Thank you so much, Steve. Glad to be with you.

CURWOOD: So what got you so interested in oceans?

ROCKEFELLER: Well, I grew up on the ocean, and then I became a sailor. And I got to see, not only the coast of Maine but other coasts, and the ocean looked great. It looked wonderful. But then I joined the Pew Oceans Commission in the year 2004 and for three years learned about what lurked under the seemingly beautiful surface of the ocean.

CURWOOD: And with that experience, I gather you became something of an activist.

ROCKEFELLER: I did. Well, you know, commissions and reports are just that. They don't themselves transform policy or create action, but they hopefully lead to it, and so I said to myself, "Well. I've been on this commission for three years. What is it I am best capable of doing now that I know the threats to the ocean?" And the answer was fairly simple in a way: I'm a sailor; I don't think most of my sailing friends or boating friends have the faintest idea - and this is 10 years ago - what the problems of the ocean are. And I am going to form an organization to help educate them and then activate them into being ocean stewards. So that was my dream and my thought process. 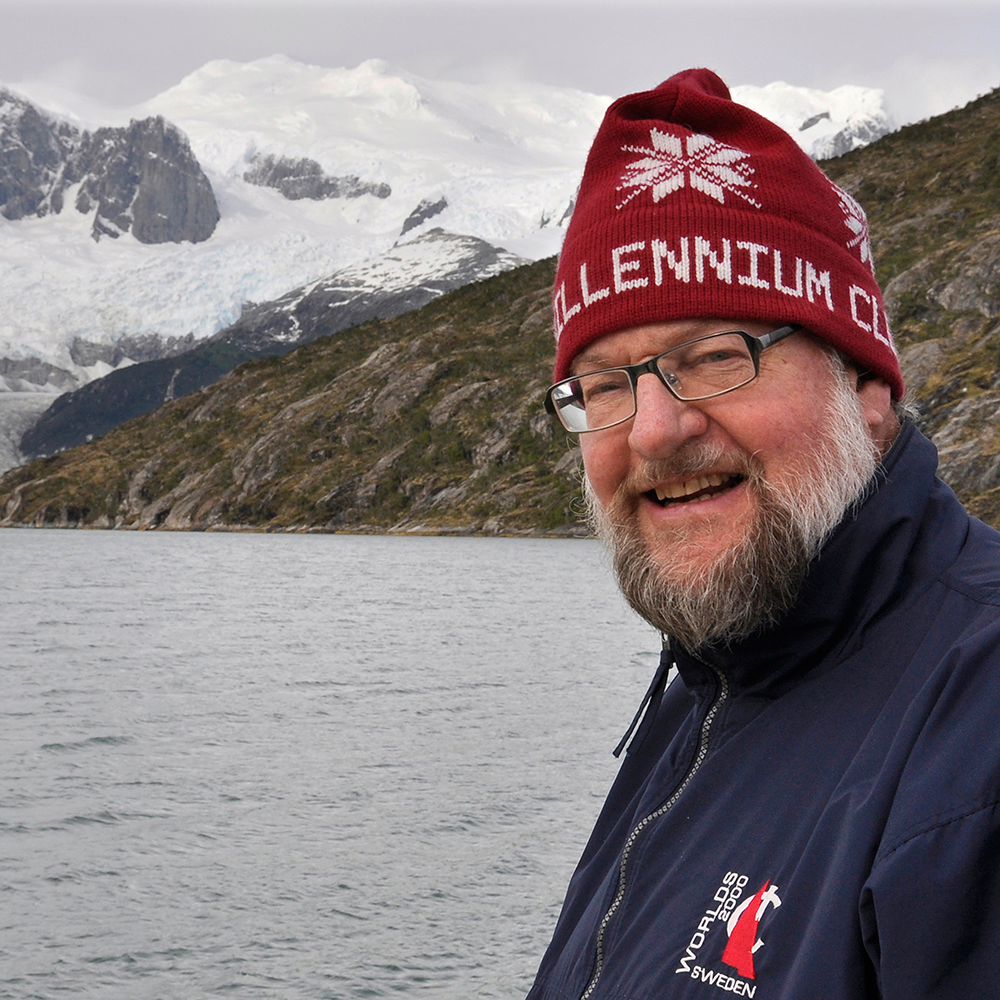 CURWOOD: Now, you came together to start an organization that you ended up calling, what, Sailors for the Sea?

CURWOOD: And I'm wondering what role do you see sailors or other recreational users have in the effort to protect the oceans?

ROCKEFELLER: I started Sailors for the Sea with the idea that there were some excellent previous models of recreational users of sensitive environments, and my models were: Surfrider, protecting the beach areas, Audubon, protecting flyways and marshes and places where rare birds collected and migrated, and then Trout Unlimited, which protected the trout streams. And in every one of those cases, the recreational users became passionate advocates to keep pristine and well stocked the areas that they depended upon for their recreational enjoyment. So, the oceans. Who could protect the oceans? Sailors and other boaters.

CURWOOD: And how's it going so far? 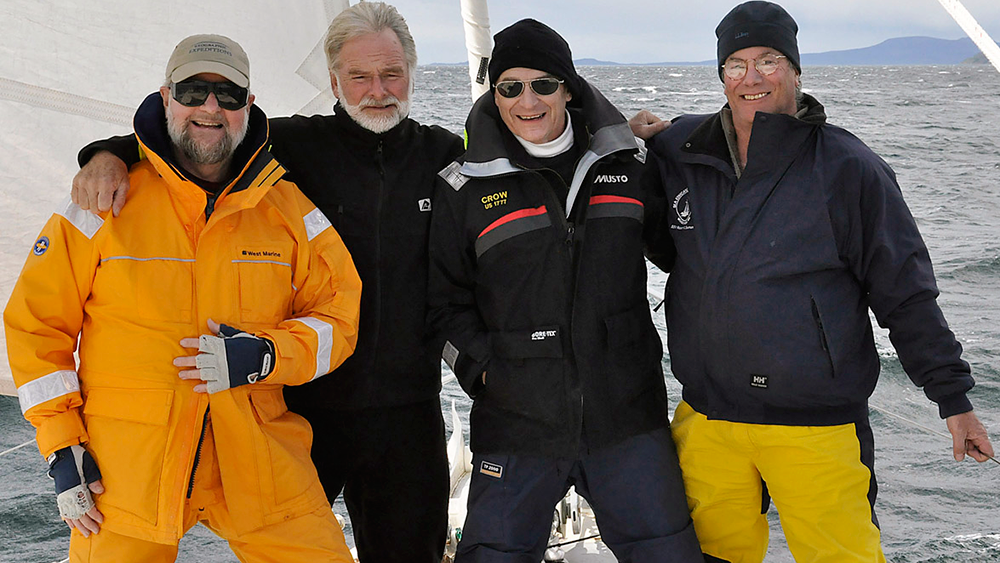 ROCKEFELLER: It is going very well. We're now...Sailors for the Sea is a little more than ten years old. We got the ear of as many as 5 million sailors and interested boaters when the America's Cup occurred in San Francisco recently. We've got hundreds of thousands of children and sailors who were involved in our regatta programs and education programs.

CURWOOD: So briefly, what you see as the biggest threat to the oceans today?

ROCKEFELLER: Carbon is the biggest problem, not something that the Pew Oceans Commission actually even focused on, so it's really come to our attention recently. And carbon when it dissolves in the ocean increases the acidity of the water and the acidity then keeps shellfish shells from hardening and interferes with the activity of the reefs in a negative way. And all of that undermines the ability of the oceans to provide food for the world, so I think food is the big reason to care about oceans and the big threat is carbon. 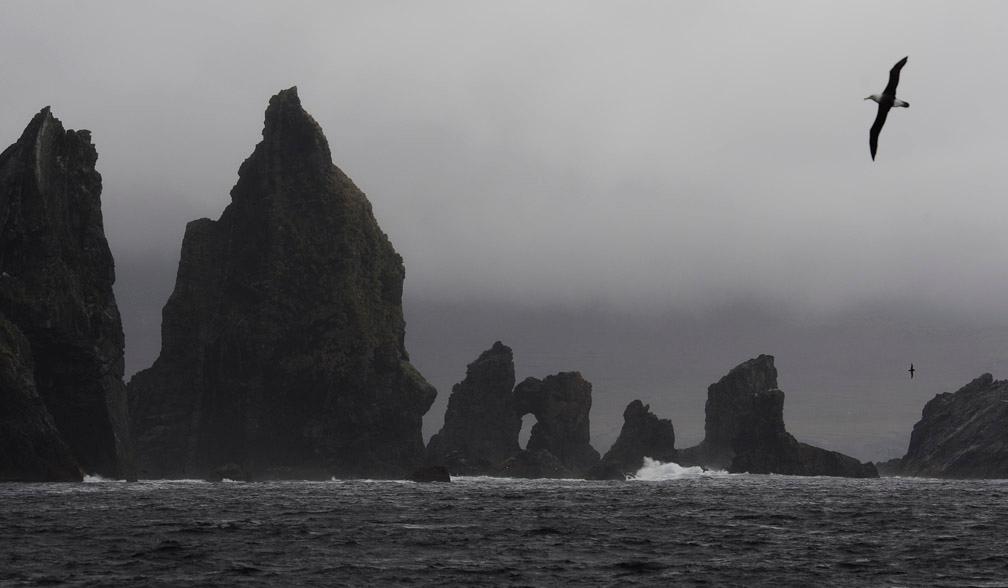 CURWOOD: So, CO2 leads to all this acidification in the ocean that has you concerned. What should we do about the sources of CO2?

ROCKEFELLER: Well, humans are the principle source of CO2 emissions through the cars that we drive, the factories that we operate, etcetera, and so the more that we can use alternative forms of energy, the more that our cars are electric or we use bicycles or walk or use mass transit, the better things can be. If, for example, 10 percent of the registered vehicles in the US drove just a mile less a day it would eliminate 22 million tons of CO2, which is about the same amount of the ocean absorbs every day. 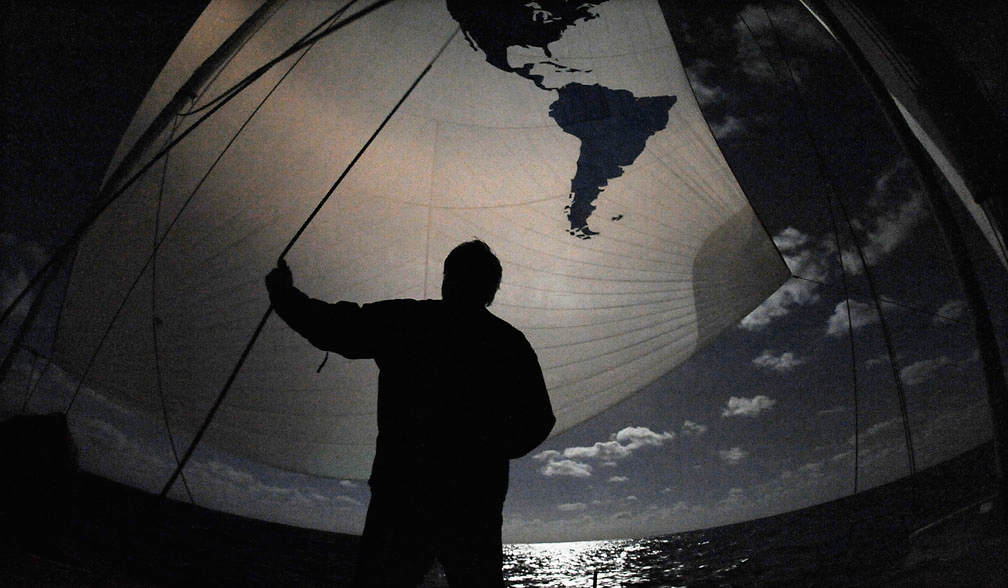 Looking beyond the Ocean Watch’s spinnaker, which featured an image of North and South America, representing that we all live on one island surrounded by one ocean and that we must work together to protect this precious resource. (Photo: David Thoreson)

CURWOOD: What about overfishing?

ROCKEFELLER: Well, overfishing certainly is a problem, and it's a problem all around the world and it's driven, of course, by global population. A century ago we were something like 2 billion people. We're 7 billion now. We will, it seems, be 9 billion by mid-century and those people need protein. They need energy. They need food, and as countries like China become wealthier, they will demand more food and more sea protein. So this is a huge challenge and has pushed overfishing.

CURWOOD: Now, you and the Bloomberg philanthropies are trying to leverage the power of private markets to, and I'm quoting you here, "to save our oceans and fisheries." What exactly are you doing? 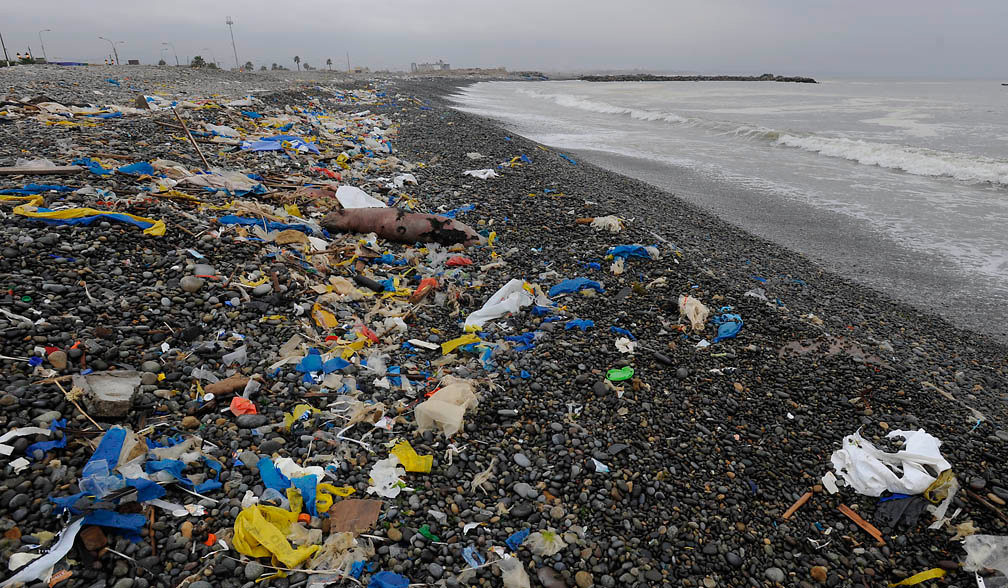 A beach covered in plastic pollution in Peru was spotted during the Around the America's expedition. Every square mile of the ocean contains approximately 46,000 pieces of plastic, the majority of which originates on land. Plastics such as this poison and kill wildlife and ecosystems. (Photo: David Thoreson)

ROCKEFELLER: Well Bloomberg has made a very big commitment and the Rockefeller Foundation is still working on where it will make its commitment, but we are looking at what it would take to convince, especially artisanal local fishermen, to stop fishing for a period of time, to give the oceans a rest, and what it would take them to finance their livelihood between the time they stop and the time they can resume. Very important because obviously, if you're asking fisherman, most of whom are not wealthy people to give up their livelihood, you need to help them deal with that, so that's the zone that we are looking at.

CURWOOD: So, David, you're chair of the Rockefeller Foundation; your sibling foundation Rockefeller Brothers Fund recently divested from fossil fuels. What steps do you think you'll take at the foundation you chair in terms of divestment? 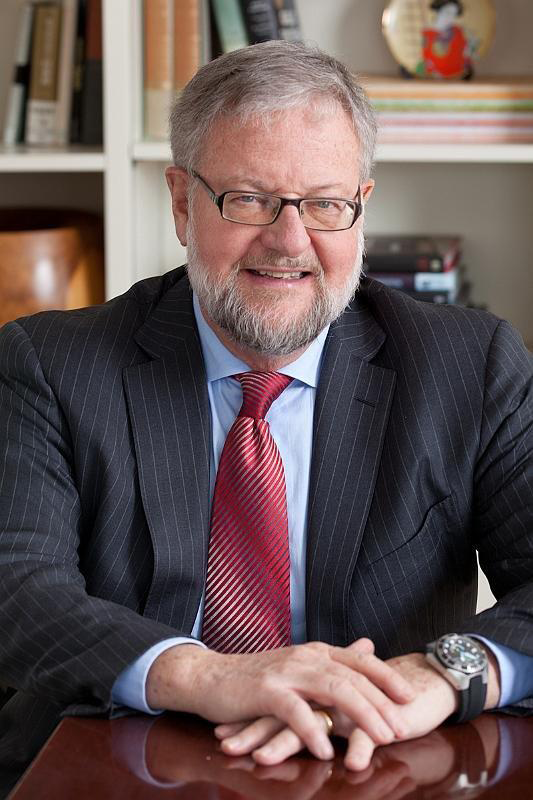 David Rockefeller Jr. is the Founder of Sailors for the Sea, and Chairman of the Rockefeller Foundation (Photo: David Thoreson)

ROCKEFELLER: The Rockefeller Foundation that I chair already has a very, very low level, I think it's less than 1 percent of its investments in coal and oil and gas, and those were the targets that the Rockefeller Brothers Fund said it was going to bring its level of investment to down to something comparable, which is a wonderful thing. So we're already at a low level and we will probably continue to look at it, but we won't go to the divestment route, but I'm very proud of the Rockefeller Brothers Fund for speaking out publicly about this issue.

CURWOOD: David Rockefeller, Jr. chairs the Rockefeller Foundation and the NGO Sailors for the Sea. Thanks for taking the time with us today.

ROCKEFELLER: Thank you so much, Steve. Glad to be with you.


Sailors for the Sea