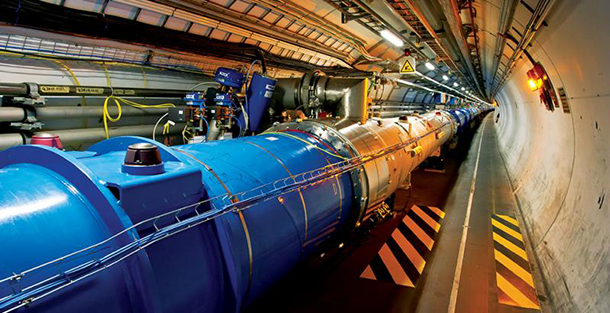 The Large Hadron Collider accelerates beams of protons or ions close to the speed of light in order to produce high-energy collisions. These collisions produce some stable and some unstable particles, which can be seen in the data collected. (Photo: CERN)

Scientists analyzing data from the Large Hadron Collider have discovered several new particles, including a couple of what are called mesons. Professor Tim Gershon of the UK’s University of Warwick, the lead author of a paper that describes this discovery, told Living on Earth’s Helen Palmer that it could help explain one of the basic forces of the universe.(

CURWOOD: It's Living on Earth, I'm Steve Curwood. Now, we don’t often report on particle physics, but there’s a lot of news in this cosmic field. Recently, the Large Hadron Collider in Geneva found evidence of the Higgs Boson, a subatomic particle predicted years ago to partly explain how energy can become mass. And now researchers using data from the collider have discovered more new particles. Two of them are called mesons, which seem to exist for the briefest of moments as tiny subatomic particles known as quarks come together to make bigger particles like protons and electrons. This finding helps explain a fundamental force of the universe. Tim Gershon of the University of Warwick in the UK is lead author of the study in Physical Review Letters. He spoke with Living on Earth’s Helen Palmer. 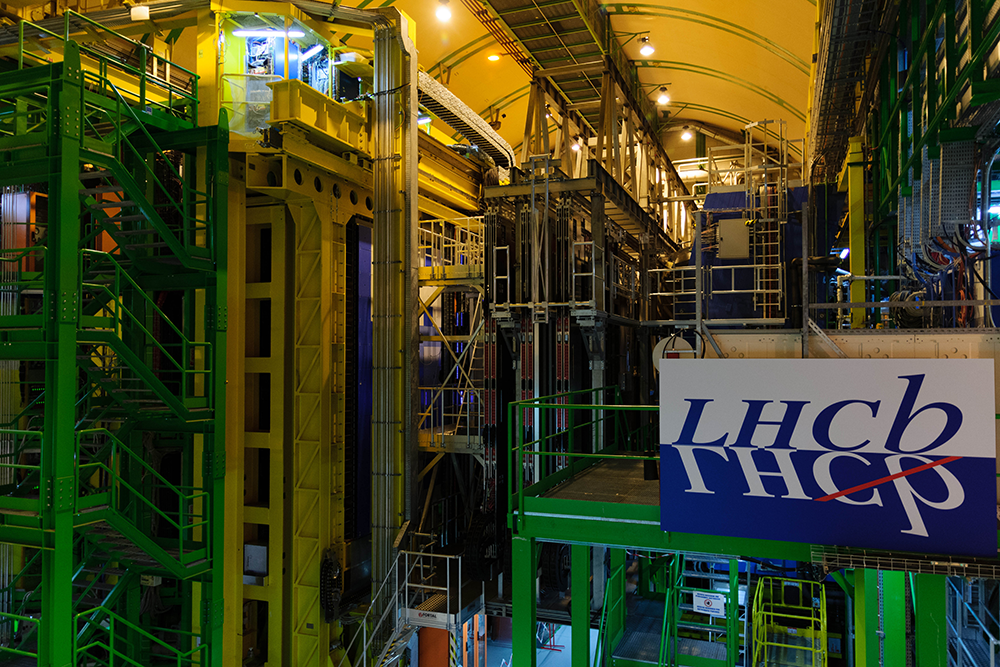 PALMER: So can you describe for our listeners, in layman’s terms if you possibly can, what exactly have you found?

GERSHON: So we have discovered two new particles. These particles are of a class of particles called mesons, which means that they're composed of smaller particles which we call quarks. Quarks are among the fundamental articles of nature, you cannot divide a quark into anything smaller.

So let's imagine if we look at the world around us, and we can see a nice view, we can see trees, and trees, of course, are built of proteins that contain molecules and the molecules are made up of atoms and inside an atom is a nucleus at the center of it, surrounded by electrons. If we go closer still into the nucleus to find that is made up of protons and neutrons held together, but inside the protons and neutrons themselves we find quarks. 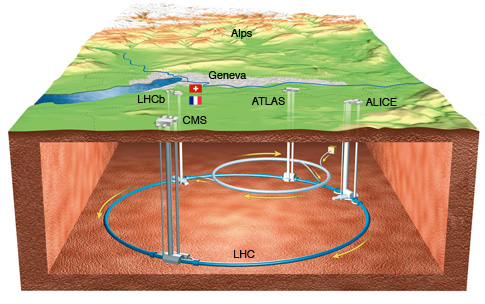 The Large Hadron Collider is buried 160 to 570 feet below the Franco-Swiss border, near Geneva, Switzerland. (Photo: CERN)

PALMER: So, basically you've gone as tiny as it is possible for anyone to go to look at what makes up our universe?

PALMER: So tell me about the quarks that are out there? 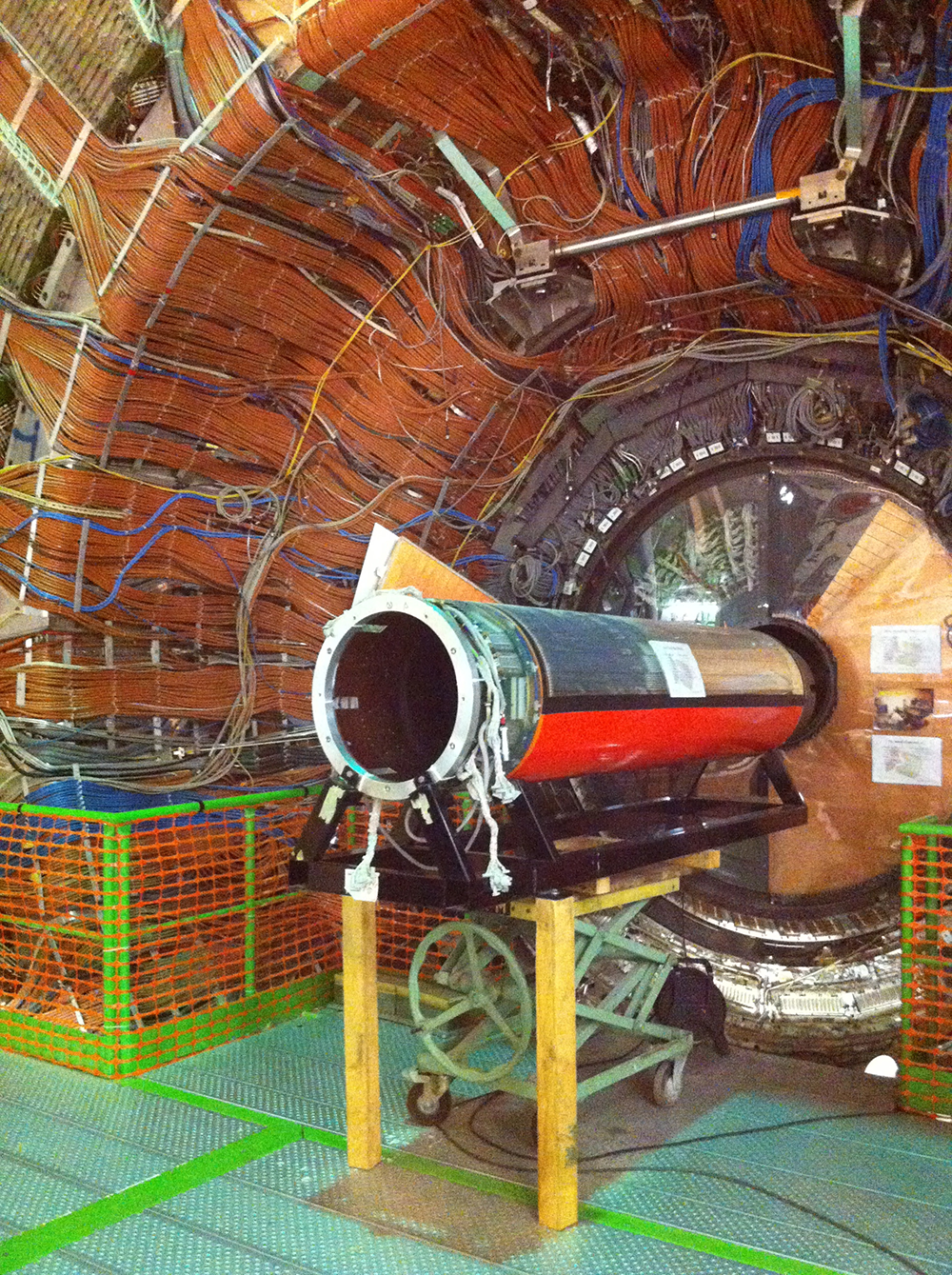 The LHCb detector records the decay of particles known as B mesons – b for ‘bottom’ (previously ‘beauty’), which is one of six types of quarks. (Photo: Jeremy Keith; Flickr CC BY 2.0)

GERSHON: There are six types of quarks that we know about, and they are called up, down, strange, charm, top, and bottom. So the lightest ones are the up and the down, and those make up the protons and the neutrons. But the heavier ones can be produced in particle accelerators. These mesons do not exist as stable particles in nature, but can be produced in particle accelerators. The new particles that we've discovered contain a charm quark as well as another quark. They're mesons so they contain a quark and an anti-quark.

PALMER: So they're subatomic particles, but what exactly did you do to actually create these new particles not known before?

GERSHON: Well, we worked with data from the LHCB experiment at the CERN Large Hadron Collider. The Large Hadron Collider has received a lot of publicity for the discovery of the Higgs Boson. That experiment is called Atlas and CMS and quite rightly so, but there's also other experiments at the LHC and in particular the LHCB experiment is designed not to look for very heavy particles like the Higgs Boson but to understand the properties of lighter particles called B-hadrons. So the "B" here stands for bottom, which is as I mentioned, one of the six quarks. I should say that actually sometimes we call them beauty, which is perhaps a nicer name than bottom.

PALMER: Well, charm and beauty, I mean, come on. [LAUGHS] 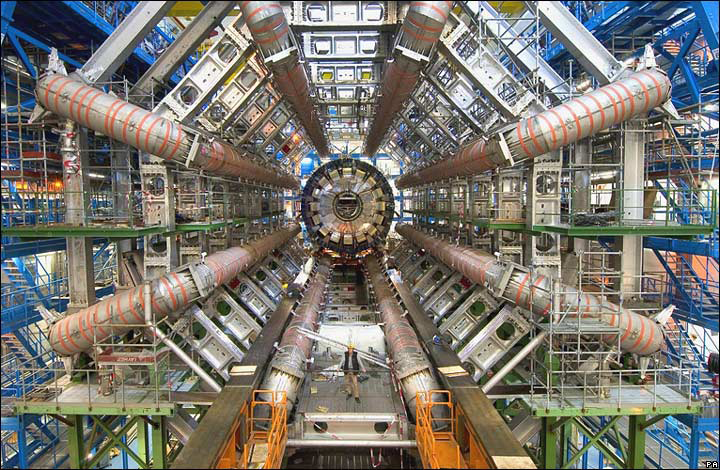 The Large Hadron Collider, with a circumference of 17 miles, is the world’s largest and most powerful particle accelerator. The European Organization for Nuclear Research (CERN) operates and maintains the collider near Geneva, Switzerland. (Photo: Image Editor; Flickr CC BY 2.0)

PALMER: So the strong force or strong interaction is a really vital force of nature? I mean, you spoke about the four forces. These are the forces that basically hold everything together in our universe. 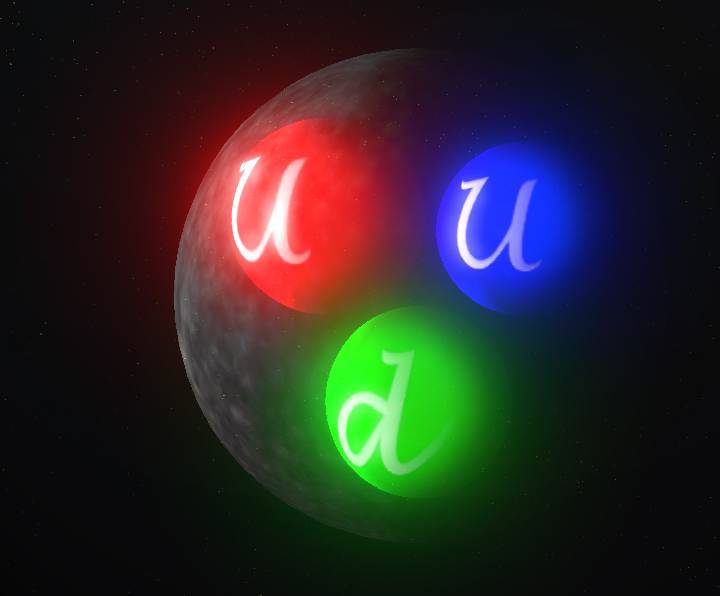 A proton is composed of three quarks: two “up” and one “down.” In contrast, the mesons recently discovered each contain one “charm” quark and an anti-quark. (Photo: J.Gabás Esteban; Flickr CC BY-NC-SA 2.0)

PALMER: So what you have just discovered will help you understand the strong force, which is what holds these mesons together. The weak force holds what together?

GERSHON: The weak force doesn't hold things together. So, the strong interaction holds nuclei together, but the place where people would be most familiar with the weak force is that it's responsible for causing nuclear decays. The weak interaction also has a very crucial role for processes that are going on inside the sun, for example. 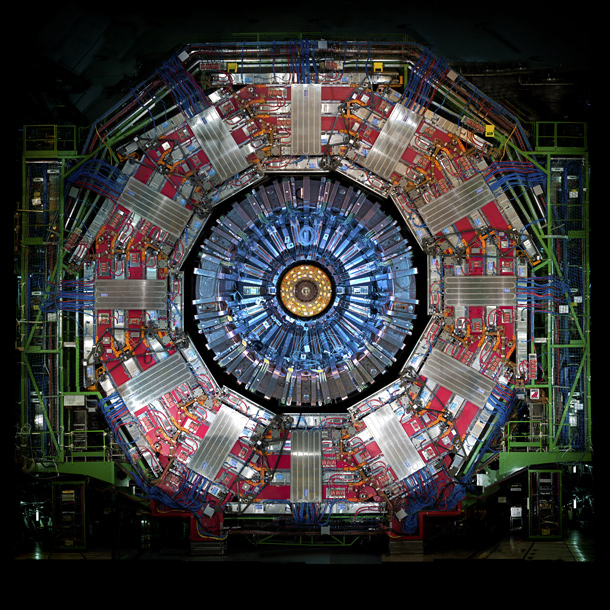 In July 2012, researchers at the European Center for Nuclear Research (CERN) announced that the Large Hadron Collider’s CMS detector, shown above, had observed the Higgs boson, marking the discovery of a new subatomic particle. (Photo: Phil Plait; Flickr CC BY-SA 2.0)

GERSHON: The development that I'm really excited about is the possibility that we can use the same technique to try and study the weak interaction, and if so, this could be a great way to learn more about one of the greatest puzzles that we have, not only in particle physics, but in all of science: why the universe exists at all.

Dr. Tim Gershon is a professor of particle physics at the University of Warwick and studies B mesons and quarks. (Photo: Courtesy of Tim Gershon)

So we want to be able to study differences between the behavior of matter and antimatter in the laboratory, but we still haven't discovered enough different types of CP violation in order to be able to explain where the asymmetry in the universe comes from. And therefore, we're looking for for more sources, and what I'm very excited about is that we can perhaps use this technique that we've discovered these new particles with to perhaps learn more about this mystery of how the universe evolved.

GERSHON: That's exactly right, and what a bleak universe that would be.

CURWOOD: Tim Gershon is a Professor at the University of Warwick in the UK. He spoke with Living on Earth’s Helen Palmer.


The paper on the particle discovery, published in Physical Review Letters