The Best and Worst Cities Preparing For Climate Change 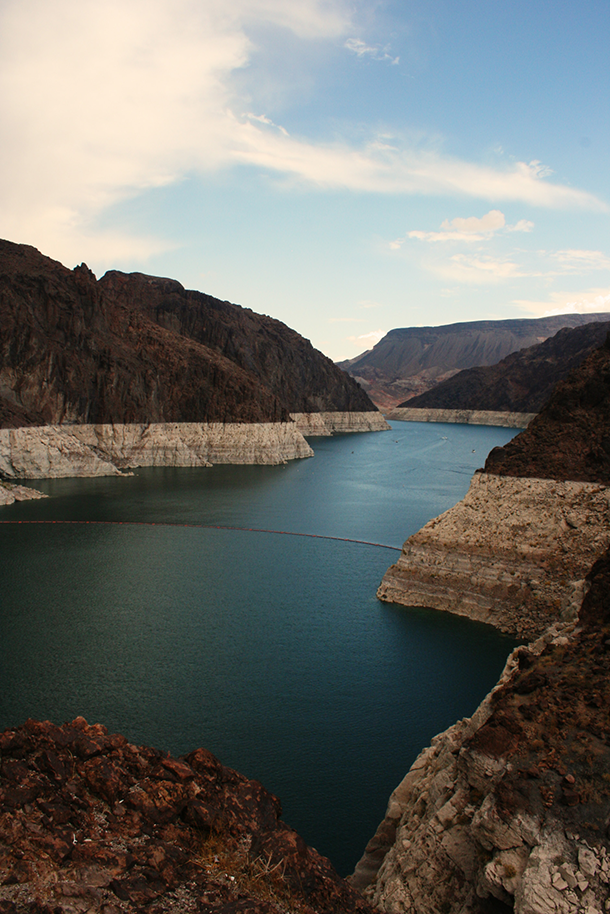 As a consequence of rising demand and shrinking supply, Lake Mead has dropped 130 feet in the last fourteen years, and Las Vegas, which depends upon the artificial reservoir for 90 percent of its water, faces severe water shortages. (Photo: Kyoba; Flickr CC BY-NC-SA 2.0)

Global warming presents cities around the world with challenges that range from drought to storms to rising sea levels. Jeff Turrentine of OnEarth magazine tells Steve Curwood which cities are doing the most to prepare climate change, and which cities have yet to plan ahead. 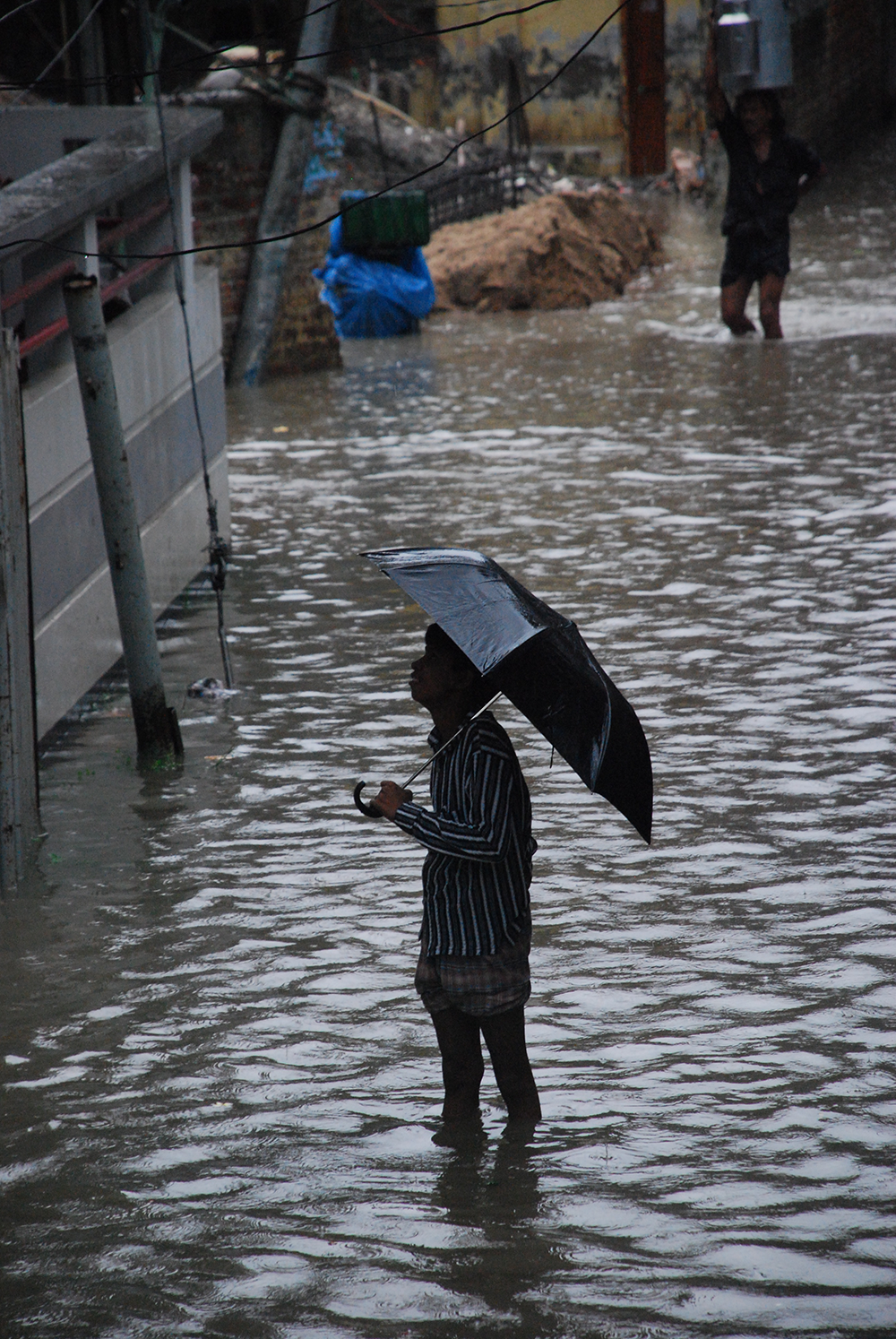 Dkaha, the capital of Bangladesh, is home to millions of climate refugees forced out of their homes elsewhere in the country. But the city itself lies just twelve feet above sea level, and flooding is an ever-increasing occurrence, earning this city a spot on Turrentine’s list of those “headed for big trouble.” (Photo: Sumaiya Ahmed; Flickr CC BY-NC-SA 2.0)

CURWOOD: From the Jennifer and Ted Stanley Studios in Boston and PRI, this is Living on Earth. I’m Steve Curwood. Today we are taking a special look at cities, where already more than half of us around the world live, and more and more of us are moving in. While the urban footprint covers only four percent of the land, cities consume three quarters of all energy, and generate 70 percent of the global warming gases from humans. When Hurricane Sandy brought floodwaters onto the streets of New York in 2012 it underscored how vulnerable our cities are, and that to adapt to rising seas, increased drought, more frequent storms, and slow global warming, we must start with cities. Jeff Turrentine is a writer and editor with OnEarth magazine who has identified some of the cities that are doing the most and the least to prepare for climate change. He says among those who aren’t looking ahead are two sprawling cities in the dry American Southwest: Phoenix and Las Vegas.

TURRENTINE: You know, 60 years ago, nighttime temperatures in Phoenix never crept above 90 degrees Fahrenheit. Now, nights in the 90s are commonplace. Their water table has dropped by 400 feet over the last 50 years, which corresponds to the amazing population growth and urban sprawl that you characterize with a city. We're talking about a city that's probably going to have temperatures in the 130s by the end of the century and they're just not prepared in terms of water and resources.

TURRENTINE: Las Vegas is in a similar boat. Las Vegas is a city that gets about four inches of water annually, 90 percent of which comes from Lake Mead—that's drying out. Seventy percent of the water that Las Vegas gets goes toward the watering of lawns, golf courses and parks. So they're using their water in what some might say is a profligate way, and Lake Mead's water level in the meantime has dropped 130 feet in the last 14 years.

CURWOOD: Now, where else in the US?

TURRENTINE: Well, in the US, the one city that is really in an unfortunate state is Miami Beach, Florida, for just the opposite reason. It's not going to dry up; it's going to flood. Already, floods are pretty routine in Miami Beach. Every autumn it floods and the drainage system in the city is reversed so that sea water and sewage start to come up through storm drains. There's one researcher at the University of Miami who believes that Miami Beach really can't survive until the end of the century. It's average elevation is about four-and-a-half feet above sea level. That's 18 inches below what is considered to be the upper range estimate of sea level rise for South Florida by the end of the century. It would turn the city into a bathtub, basically. 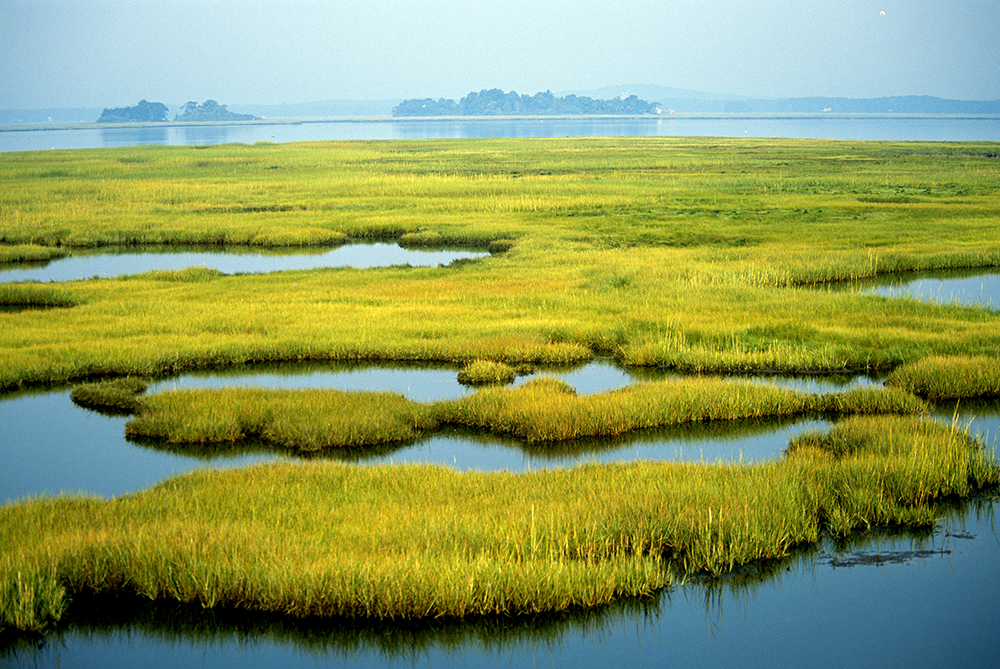 CURWOOD: OK. It may be too late to save Miami Beach, but what cities around the world, in your view, are doing a good job to prepare for climate change?

TURRENTINE: Well, sort of the flip side of Miami Beach is the city Rotterdam in the Netherlands. It's Europe's biggest port, and even though it's not a city that a lot of American tourist may know, it's a very big deal indeed to the European Union. So they have put all of their effort and energy and quite a bit of money into making sure that Rotterdam stays above water. One of the things they've done is create this incredible plan called Rotterdam Climate Proof, which really focuses on sea level rise in making sure that the city doesn't get flooded. One of the most amazing things about Rotterdam is that they’ve created what might arguably be called climate change's first tourist attraction. In the bay there, there are these three giant floating jellyfish-like contraptions that people love to go and visit. What they really are, are kind of models of how cities might need to start creating floating infrastructure in the future if they want to deal with rising sea levels. 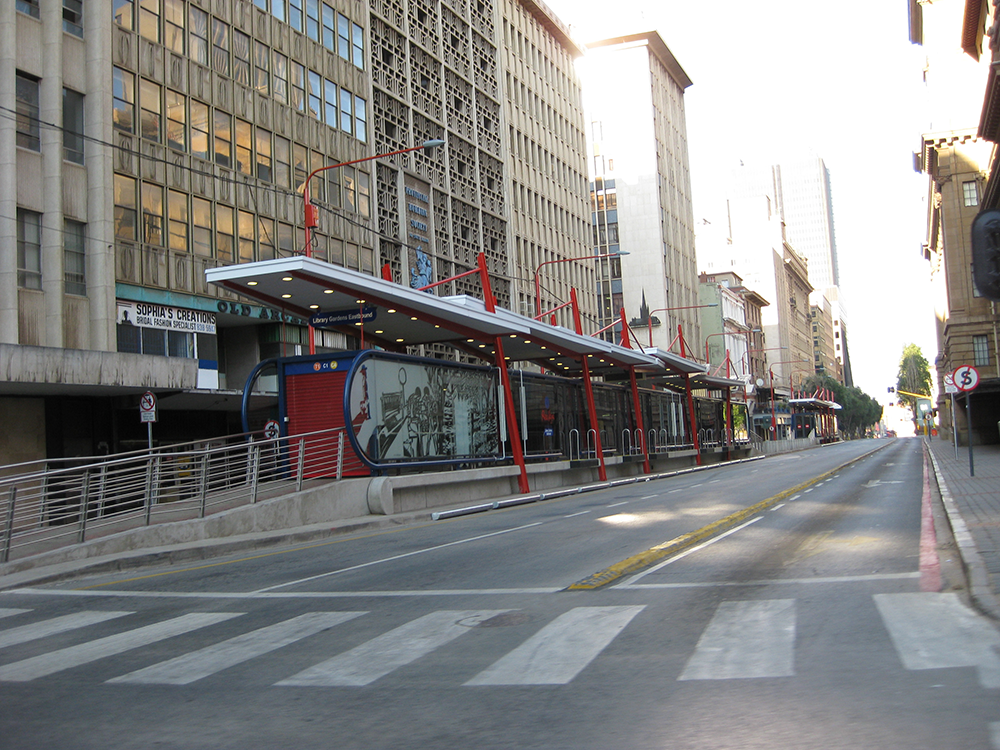 CURWOOD: Hmm. So if you're a hospitality business, go for the cruise ship rather than the hotel?

CURWOOD: So what other cities around the world are taking climate change seriously?

TURRENTINE: Well, in United States certainly I don't think you could understate the degree to which Hurricane Sandy made a believer out of New York City. When that occurred in 2012 and dozens of people were killed and it led to $20 billions worth of damage, Mayor Bloomberg another city officials responded vigorously with a package of more than 250 different initiatives that were going to be implemented over the years, pretty much all of which were designed to minimize the city's vulnerability to coastal flooding and storm surge. 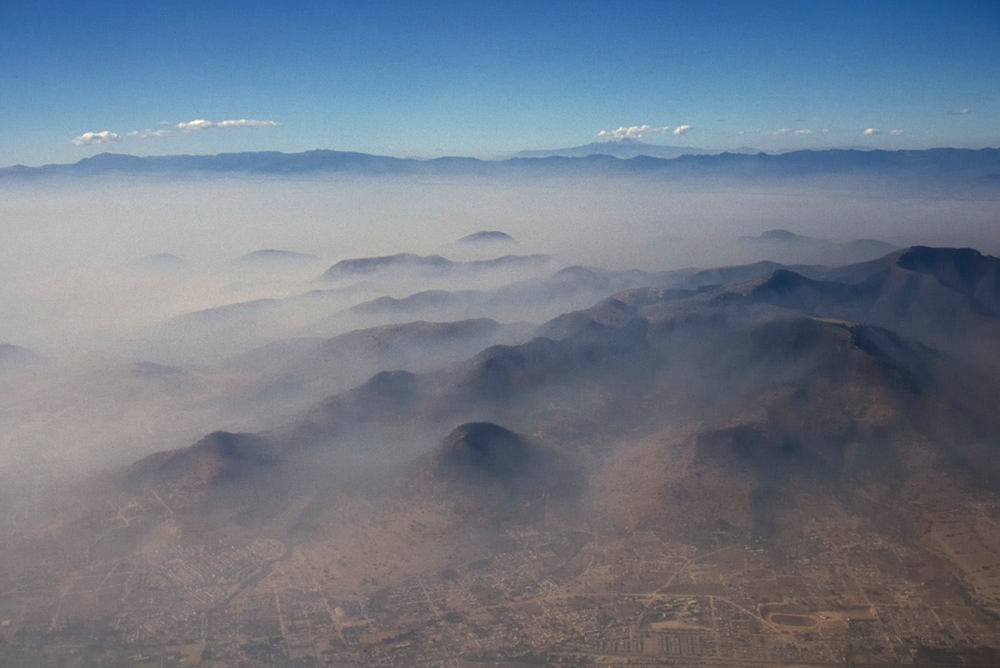 Mexico City used to be infamous for its choking smog, photographed here in 1981. Since then, the city has significantly reduced its air pollution: its all-time record low of 8 “good air days” in 1992 became a remarkable 248 days in 2012. (Photo: George Lamson; Flickr CC BY-NC-SA 2.0)

TURRENTINE: It's a 438-page document and the plan is about $20 billion dollars of money going to these different mitigation measures. Three-fourths of that is going to be about rebuilding infrastructure, but interestingly $5 billion or so is reserved for exploring new technologies and kind of playing around with new ideas to see if there might be some better technique or technology out there—the talk of seawalls and armored levies and green infrastructure like wetlands and swamplands and sand dunes and things like that.

CURWOOD: And where are the other cities in North America on the list?

TURRENTINE: Well, one city that doesn't have to deal so much with flooding, but has had incredible air pollution issues, of course, is Mexico City. In 1992, the United Nations declared Mexico City to be the world's most polluted city. There was one report around that same time that speculated that as many as 100,000 children in the metropolitan area could be dying as a direct result of air pollution. Breathing in the city was just a dangerous thing to do and as global temperatures rise and air pollution increases and ozone increases, the people in that city would've been disproportionately feeling that global burden. The government got serious about it; they created a plan that was going to curb emissions of greenhouse gases and pollutants in Mexico City by 7.7 million metric tons between 2008 and 2012. 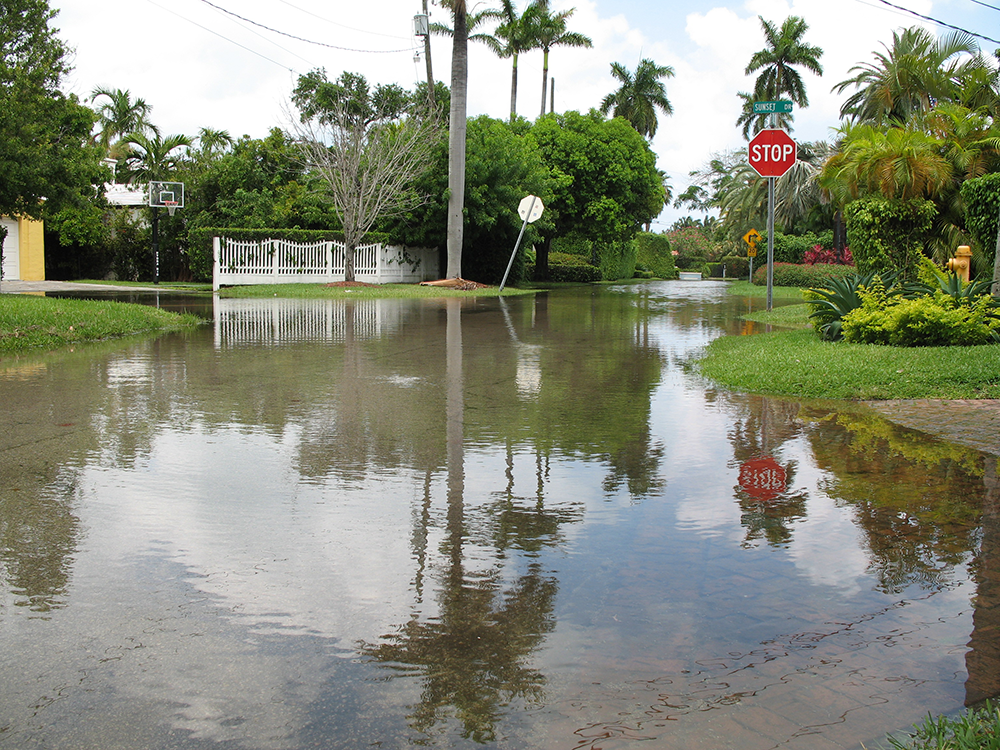 Flooding in Miami Beach. Experts worry that the city could be underwater by the end of the century. (Photo: Nathan Forget; Flickr CC BY 2.0)

TURRENTINE: To the surprise of the entire world they surpassed that goal by 10 percent and suddenly cities all around the world that were dealing with air pollution were looking at Mexico City as a model of inspiration rather than a model of peril and danger.

CURWOOD: Jeff Turrentine is an editor and writer with OnEarth magazine. Thanks for taking the time today, Jeff.

TURRENTINE: Thank you very much.

Despite cutting its water use by a third since 2002, Las Vegas, which receives only four inches of rain annually, still uses approximately 220 gallons per capita per day (GPCD). That’s more than twice California’s statewide average water consumption. (Photo: Zach Dischner; Flickr CC BY 2.0)

More on cities in the latest addition of OnEarth magazine