Car-Free To Become Carefree In Helsinki 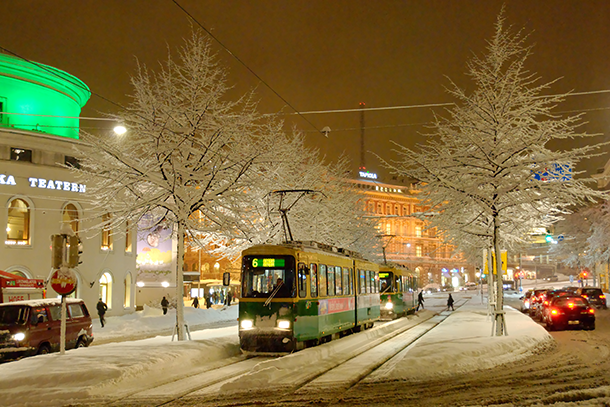 A tram in the Helsinki winter. City Planners predict that current roadways and subways will not be able to support Helsinki’s growing population unless a smart phone-based mobility service is implemented to make better use of resources. (Photo: Niklas Sjöblom/City of Helsinki Tourist & Convention Bureau)

Finland’s capital of Helsinki is growing fast and the city’s current transportation system is overstretched and short of money. Helsinki’s Director of Transport and Traffic Planning Ville Lehmuskoski tells host Steve Curwood about the city’s novel “mobility as a service” model and how investing in shared modes of transit based on needs will save money, reduce traffic congestion, and improve travel comfort and convenience.

CURWOOD: Helsinki is growing fast, and city planners trying to prepare for that growth, realized they needed a better way for people to move around. The public transit system in Finland’s capital city is already overcrowded, and there isn’t the money to keep investing in new roads and highways. So, they turned to the novel idea of treating mobility as a service, and using a mix of all modes of transport that would take the job of figuring out how to get from point A to point B out of users’ hands. Ville Lehmuskoski is the Director of Transport and Traffic Planning for Helsinki, and he joins us now from a park bench in the city to talk about the plans. Welcome to Living on Earth.

CURWOOD: Talk to me about this idea of mobility as a service. What does it mean at the end of the day?

LEHMUSKOSKI: The basic idea is you have a transportation operator that takes care of arranging your transport. So you have an interface provided by this transport operator and in the interface you test the points, A and point B, and then get the options and the prices for different options, for example, local public transport or long distance public transport, carsharing, city bike system, automobile rental system, or you have a mixture of all these. 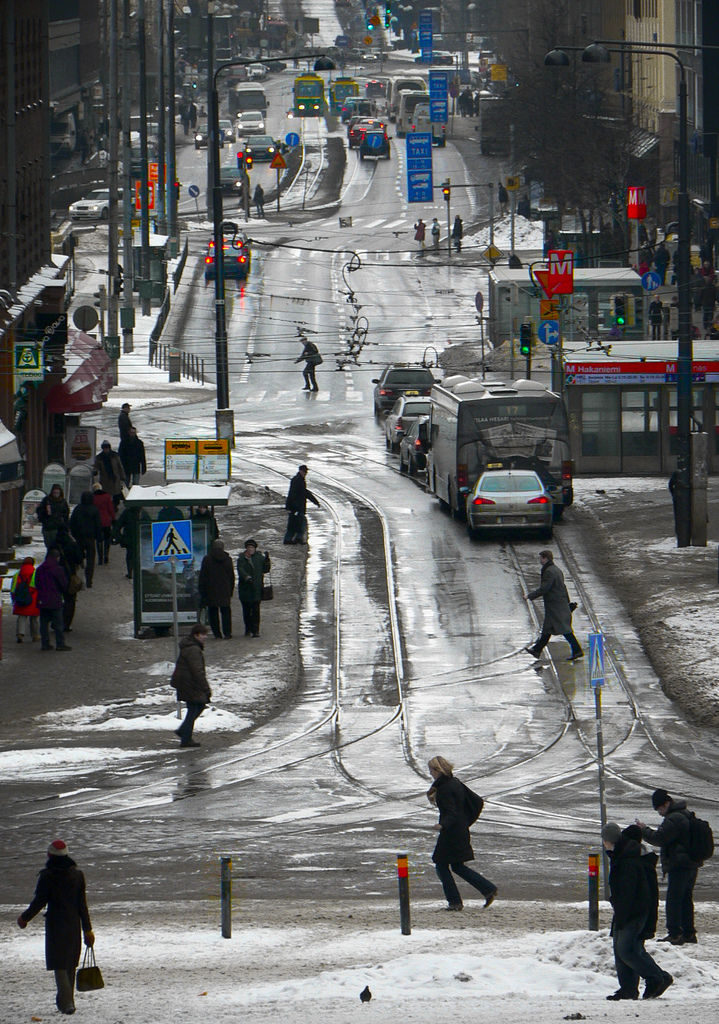 Helsinki has a range of transport modes: train, bus, bicycle and walking. “Mobility as a Service” would build upon this, allowing people to use bikes, cars and public transport on a need basis. (Photo: Aapo Haapanen; Flickr CC BY-SA 2.0)

CURWOOD: So paint a picture for me would you please? If I'm a resident of a future Helsinki where this newly redesigned transportation system is in place, how do I get from point A to point B?

LEHMUSKOSKI: In the current mobility system, people own their cars. They just have their car or two cars that the family has. But in your life you have a several kind of different situations and, if you use mobility as a service, for every trip you get just the kind of car that you need, that you want. For example, at some point you need your Toyota Corolla, at some point you would like to have a van, at some point you would like to have some sport car, Ferrari or something like that, and you also have the possibility to take public transport, take bikes, take also different kind of bikes. You see you can always take the best option. And also important is that you don't have to invest. The investment cost is very big when we talk about cars. In Finland, a car as in America, it costs several thousand Euros and if you use it as a service, you don't have that investment cost. You just pay by use.

CURWOOD: So how does this work? I pick up the phone and call my service provider or do I go online? How would I engage?

LEHMUSKOSKI: Well, of course, that depends on your mobility operator, but in my imagination I see that it's a mobile phone application or computer application.

CURWOOD: Who will these mobility managers be?

CURWOOD: Now, just how far along are you there in Helsinki in the process of adopting this system?

LEHMUSKOSKI: We have already some small pilots, but I would say that traffic as a service in the way that I described to you will take a least a few years, maybe five years to be reality. 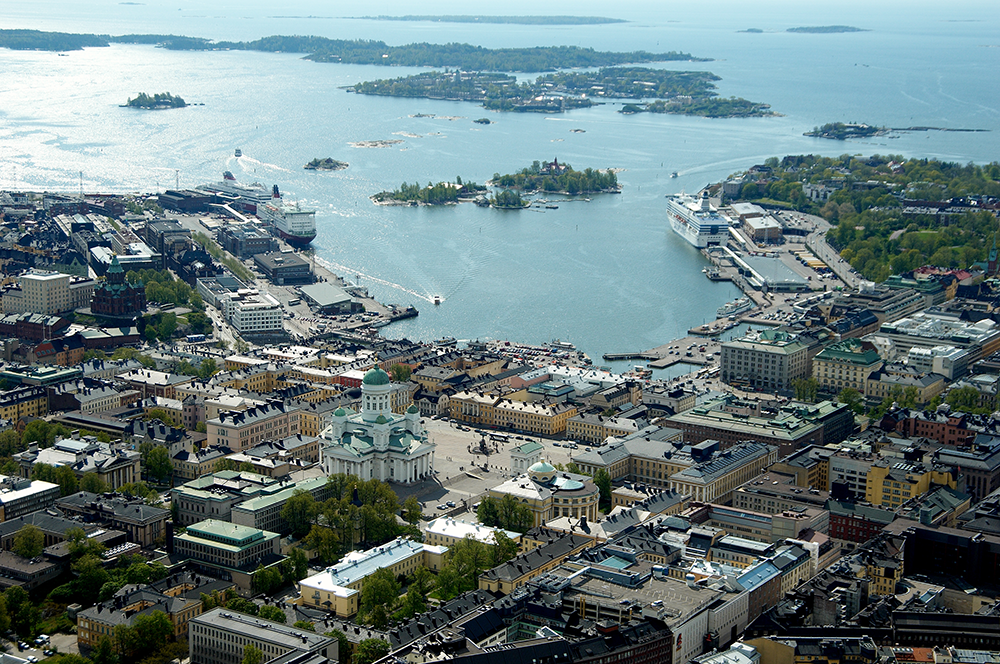 A view of Helsinki from the air. (Photo: Suomen Ilmakuva Oy/Visit Helsinki)

CURWOOD: To what extent is a core goal of this plan to make owning a car basically unnecessary in Helsinki?

LEHMUSKOSKI: Well on our streets there is no place for expanding car traffic but we don't have any fixed numbers for how many cars we want away by using this system. But, I'm very sure that when you have all these options and you pay per use, not as an investment then a big number of citizens will use sustainable modes instead of car. I would say that the change will be dramatic.

CURWOOD: What about the cost of all this? How much is it going to cost to really build out and maintain a system like this, compared to the present?

LEHMUSKOSKI: Hmm, the back of the system actually needs not any rugged science software, so it will not be a big cost. But when we talk about economical efficiency of public transit system we need to remember that, at least in Finland, that passenger cars are not in use 96 or 97 percent of the time. And all the time anyway, the capital is tied up to the car, and that's a very ineffective use of capital. That's lazy money, I would say. When there's not that big a need for capital in cars, it makes the system as a whole much more effective in terms of efficiency of both public money and private money.

CURWOOD: So your expectation then that this is going to be cheaper for everyone once it's working. 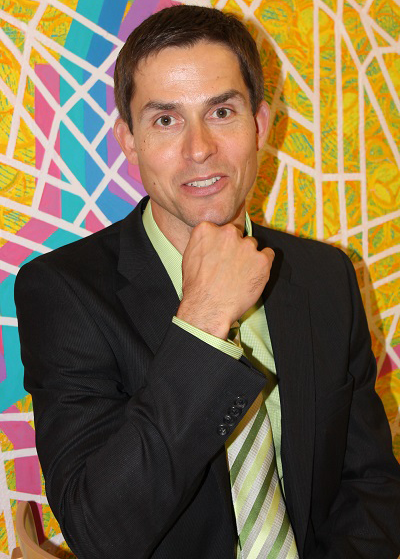 CURWOOD: Let's fast forward, say, a decade. What do you imagine the streets of Helsinki would look like, and how much parking would be available?

LEHMUSKOSKI: In the future, there's a lot of parking available because the cars are moving. Those cars that are needed, they take one passenger to place A to place B, then they continue, so the amount of cars is maybe half of today or even less. So there's much space in the city; there are much more cyclists, much more public transport users. And there are happy car users.

CURWOOD: Ville Lehmuskoski is the Director of Transport and Traffic Planning for the city of Helsinki, Finland. Thanks so much for taking the time today.


“Mobility as a Service” Thesis

The Helsinki Times’ story on the future of Helsinki transport

Plans to implement “Mobility as a Service”