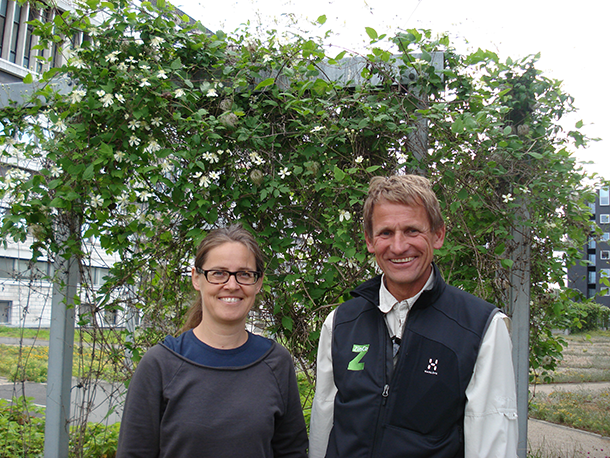 Dorthe Rømø, a biologist and Project Manager of Green Roofs Copenhagen stands with Per Malmos is the Director of Responsible Sales with Malmos, a company that specializes in creating green spaces. (Photo: Helen Palmer)

Copenhagen, the capital of Denmark, was named Europe’s greenest capital in 2014. It’s partly due to the ubiquitous bike paths and the ambitious renewable energy goals, but as Living on Earth’s Helen Palmer reports, also due to the many green roofs the city is installing to soak up excess rain and cool the capital.

CURWOOD: It's Living on Earth. I'm Steve Curwood. About 550 miles southwest from Helsinki lies Copenhagen, the capital of Denmark. It's a prosperous, urbane city of just over half a million; a city of high prices, high taxes and extraordinary attention to the environment. Copenhagen earned the official European seal of approval in 2014, as the EU officially anointed it as EU's greenest city. Living on Earth’s Helen Palmer went there and found it, well, green. 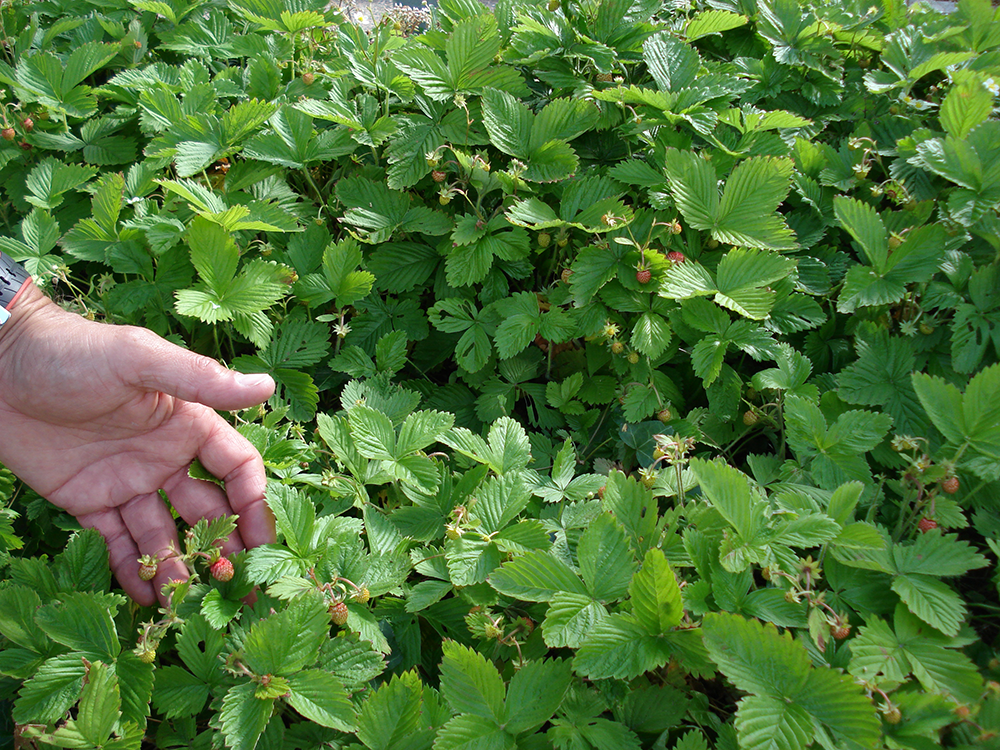 Strawberries grow in raised garden beds on the roof of the National Archives. (Photo: Helen Palmer)

PALMER: The windy port of Copenhagen is truly the greenest of green cities. Beyond the busy harbor, and the statue of the Little Mermaid, massive windmills in the ocean and on the industrial island of Christianshaven spin in the brisk wind.

A brand new bike path loops and sweeps at third floor level between banks and businesses, to link the inner harbor through a series of parks and gardens on the rooftops to the railway station. After all, it's a city where just about everybody rides bicycles.

Dorthe Rømø, a consultant to the city's Department of Planning and Climate Adaptation, has a pretty good idea why the city keeps winning green awards. 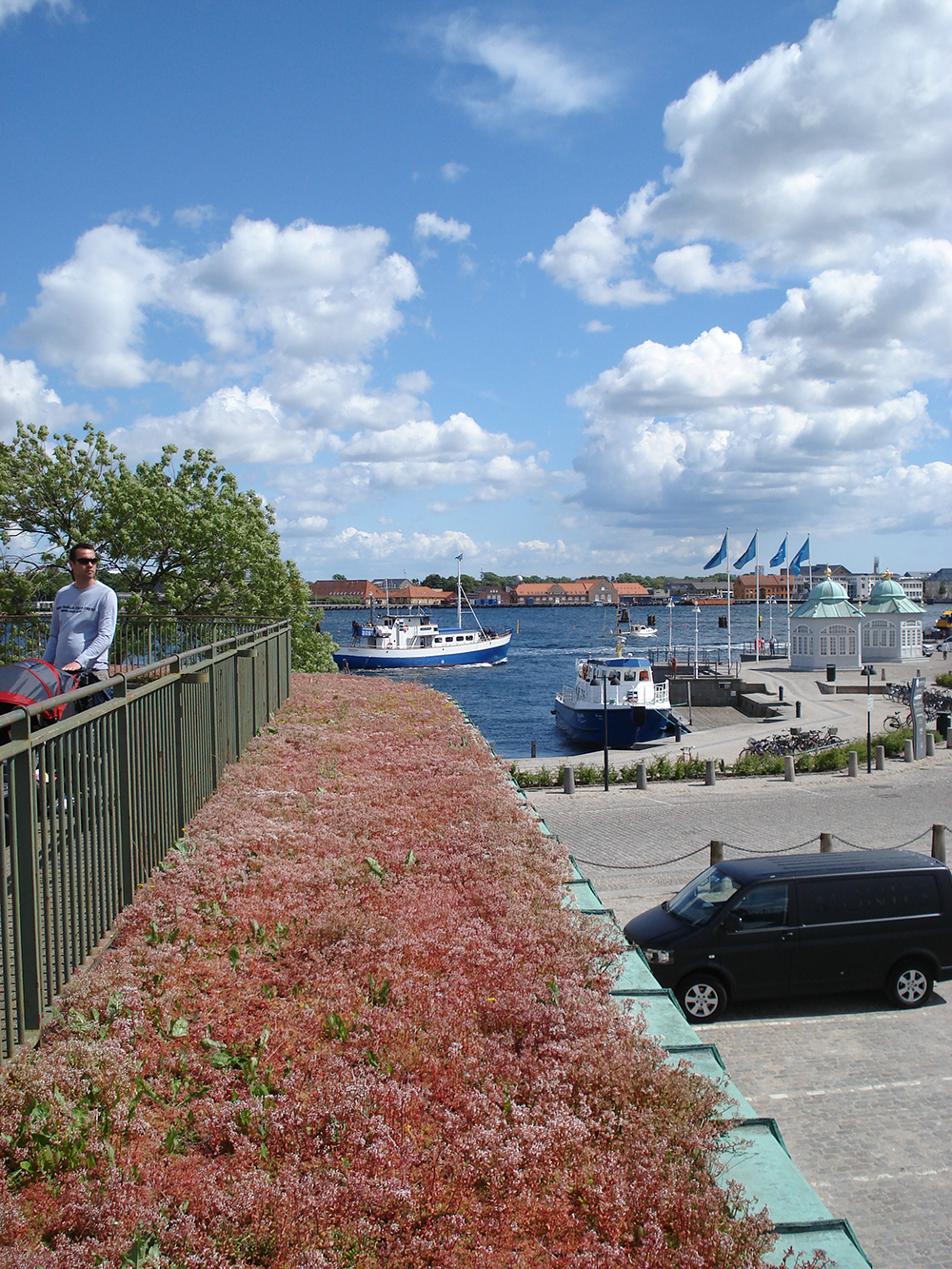 Flower beds, 3 feet wide, run along the building’s edge and soak up the rain in place of gutters. (Photo: Helen Palmer)

RØMØ: I think it's a matter of many different aspects – it's due to our focus on renewable energy. It's a focus on sustainable traffic. You know that the city of Copenhagen is doing many things for bicycles in the city, and then we also have a tremendous focus on greening the city. A part of that is to install more green roofs, and have focus on wherever there’s space to green the area, transform the grey to the green.

PALMER: Urban planners tout the benefits of installing plants on rooftops as insulation and as an antidote to urban heat islands - not a problem you'd expect for a place that's on roughly the same latitude as Moscow and Goose Bay. But green roofs have been mandatory on suitable new buildings in Copenhagen since 2010, and Dorthe Rømø says you could be wrong about what the city needs to plan for.

RØMØ: In the future due to the climate change, we will expect there will come higher temperatures in our city – but that's only one aspect of the initiatives about green roofs in the city because another very important aspect is that we know and we are aware that we will have more intensive rains and more rain in general and, due to that we know that green roofs and green area can absorb, infiltrate, evaporate and delay the rainwater. 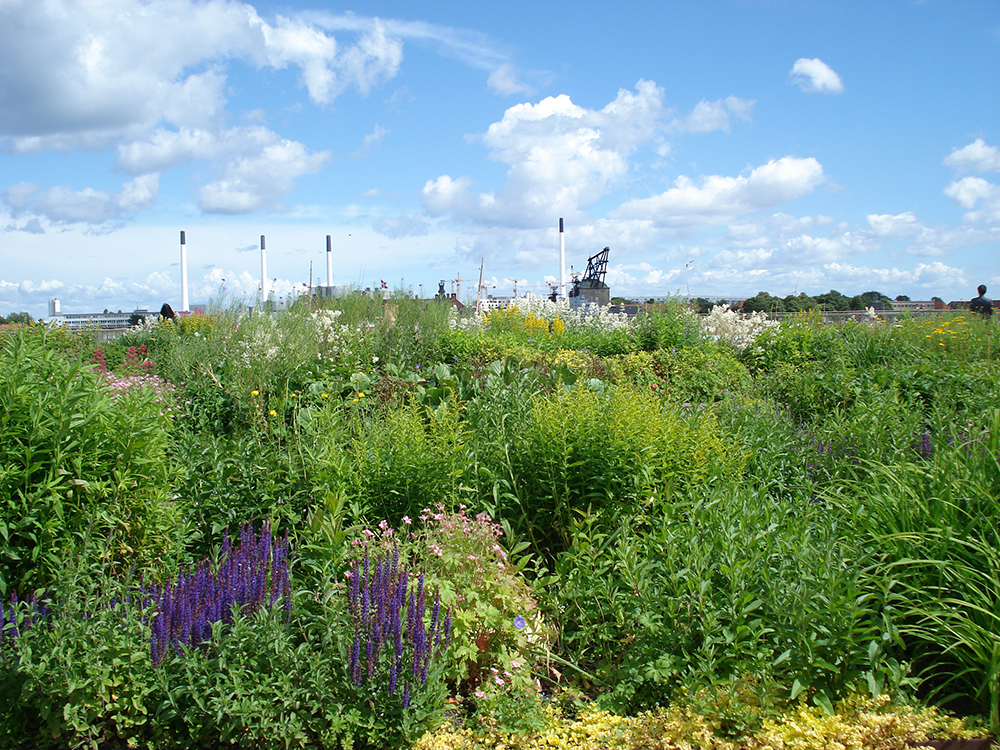 PALMER: Now, we’re standing here actually on one of your green roofs. Describe where we are and what exactly we’re seeing around us.

RØMØ: Yeah. We are pretty close to the inner harbor and we are in the middle of a green botanical corridor. We are on the new Danish National Archive, and the unique about this is that it's one amongst other green roofs that's connected and accessible for the public to walk from one area in the city to another area in the city, and you can in fact also take a bicycle and cycle from one area to another area.

PALMER: So it's a basically like a system of parks as it were on top of roofs? 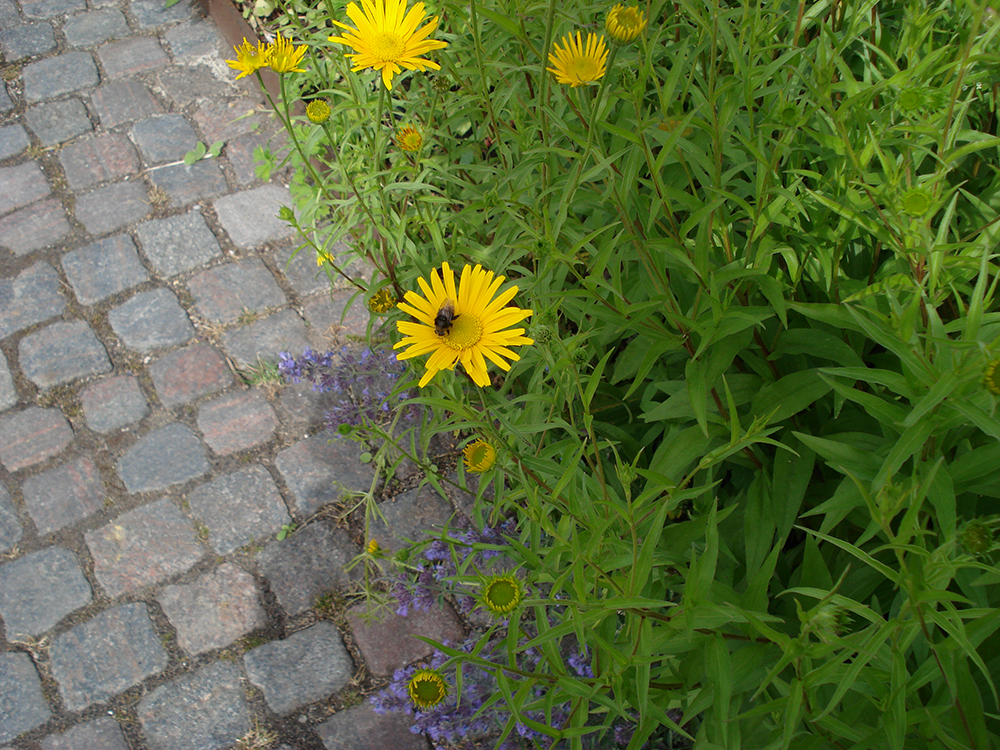 RØMØ: Exactly, and this green roof which is one of my favorite here in Copenhagen, it's an option for you to sit on benches surrounded with strawberry beds which is designed to create silent gardens alongside the whole project.

PALMER: The rooftop of the National Archives is about the size of a football field but it looks for all the world like a meadow; there's vetch and thyme and thrift and nodding grasses interspersed with those strawberry beds and benches bordered by trellises clad in purple clematis and Travellers Joy. The studied artlessness of the garden is due to complicated planning and very careful construction, says Per Malmos, whose company installed the roof.

MALMOS: First of all you have to make sure that you don't make leaks—you don't disturb the membrane when you install it. You have to be sure that the waterproofing protecting against the roots growing inside the membrane. 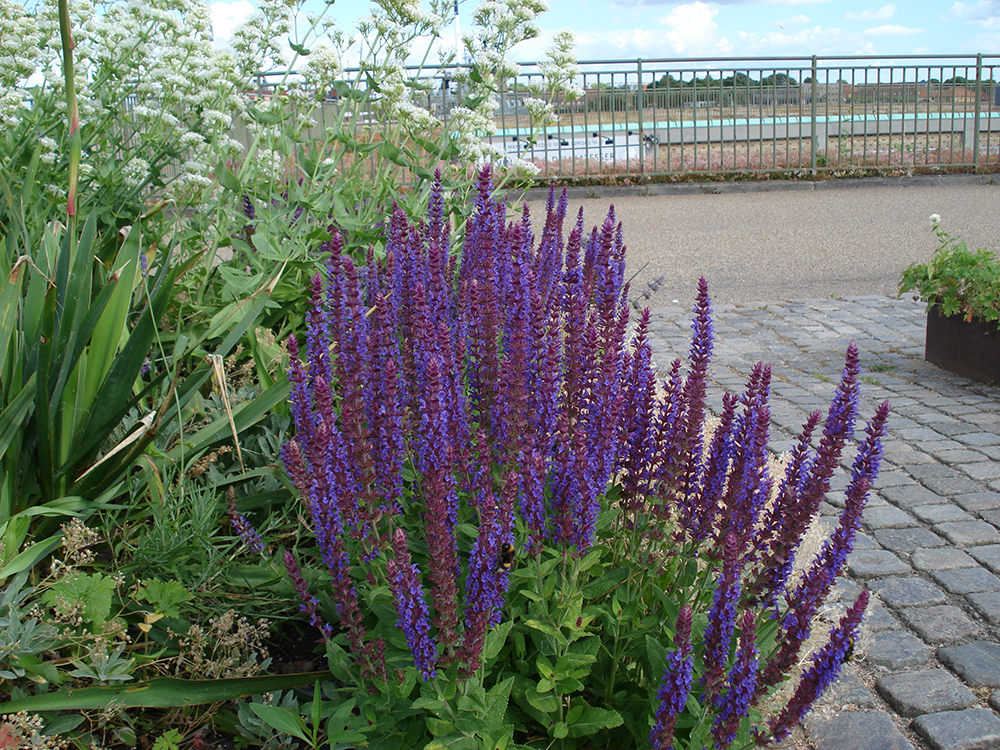 PALMER: Ah, so it's got to be totally impervious to water but also tough enough so the roots don't make holes through it.

PALMER: Malmos had brought along samples of the materials layered underneath the plants on the roof to protect the building below from leaks, and collect the rainwater so the garden needs no irrigation.

MALMOS: Then you take care of the membrane, and on top of it you place a drainage layer, so you can be sure when it will rain very heavily the water can still running away because if not, it will flood and be muddy and you couldn't walk on it.

PALMER: Right. So what you've got here is a layer of something that looks like felt and on top of this is—it looks for all the world like what we make egg cartons out of. 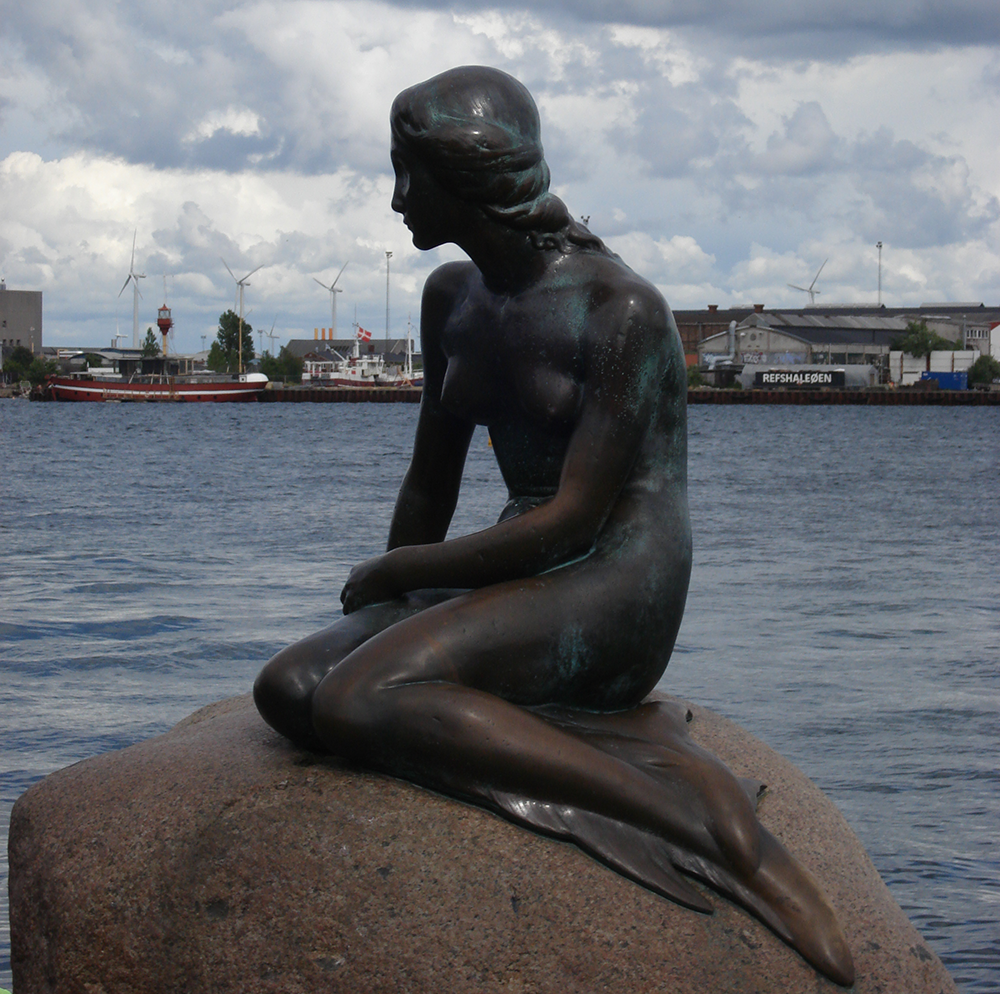 MALMOS: Yeah, it's a sandwich layer underneath, and then you have a layer of substrate. And it's not normal top soil; it's a top soil which is light. It sucks the water, so it's full of water.

PALMER: It's a system that's been developed over years to work really well, and now the meadow and flowerbeds are thriving. Dorthe Rømø says they provide other benefits.

RØMØ: It create the opportunity to create habitats, to support biodiversity.

PALMER: So biodiversity, you mean, like rabbits in the middle of Copenhagen?

RØMØ: [LAUGHS] Not exactly, but butterflies and bees and birds, and invertebrates like that but also diversity of plants. 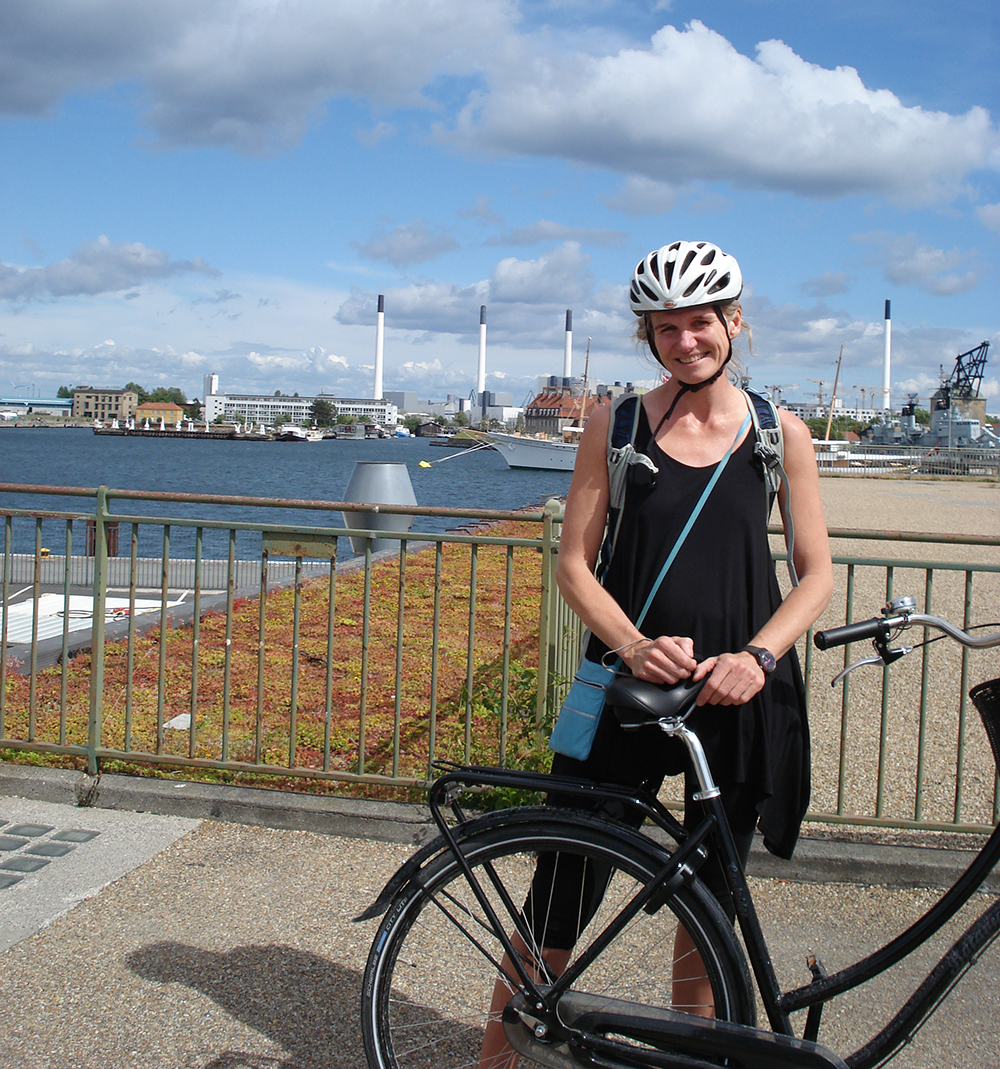 [BIRDSONG, DISTANT SOUNDS OF THE CITY]

PALMER: It's peaceful walking on the roof. In one corner, there's a group of office workers having a barbecue. Further along, the ramps that lead down to street level are a magnet for local skateboaders.

PALMER: Copenhagen intends to have half its citizens getting to work or school or running errands by bicycle by 2015, and to generate all its power from renewable sources by 2040. Dorthe reckons the city's on track to meet those goals; already 40 percent of its energy is green. It's too soon to know what impact the green roofs have on the carbon balance, but she's sure they affect the citizen's balance and their well-being.

RØMØ: We like to have the view of some beautiful areas, but in fact you can also create these beautiful areas. And I, in fact, have also heard from people they are surprised of being in a silent area even though that you are in the middle of a city.

PALMER: And there are these oases of green not only on houses, hotels and city buildings, but also on parking garages and even on bicycle and storage sheds. 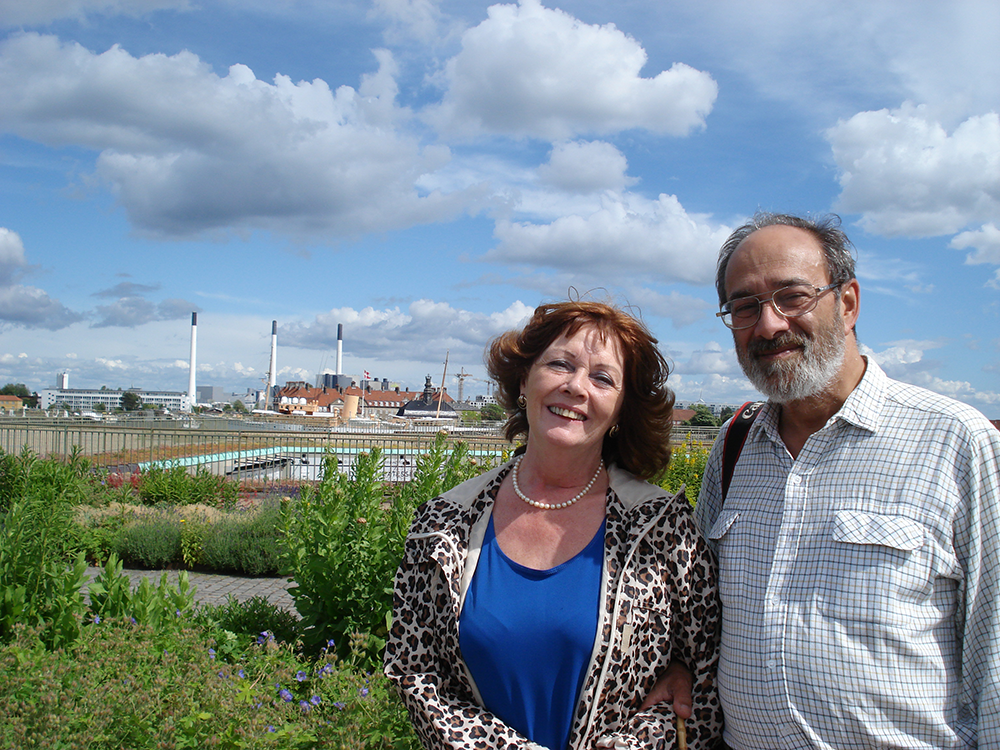 [SOUNDS OF WAVES LAPPING, AND BIRDSONG]

RØMØ: Right at the harbor, the roof of a development of shops and cafes is covered with flowerbeds, benches and walkways but no gutters, because a three-foot-wide bed of stonecrop and sedum along the edge takes up all the rain. I met Hille Løvig up there with her bicycle, taking pictures.

LØVIG: Oh, I think it’s nice; it’s absolutely nice. I’m working just under this roof, so I enjoy it here and I enjoy the water of course. And it's important to have flowers around us. I think I am one of the luckiest [LAUGHS] here in Copenhagen to work in a place like this.

PALMER: Walk further along the harbor and you come across the statue that commemorates Hans Christian Andersen's story, the Little Mermaid. Cruise ships stop here and tourists like to stroll, people like Bridget Whiting from London. 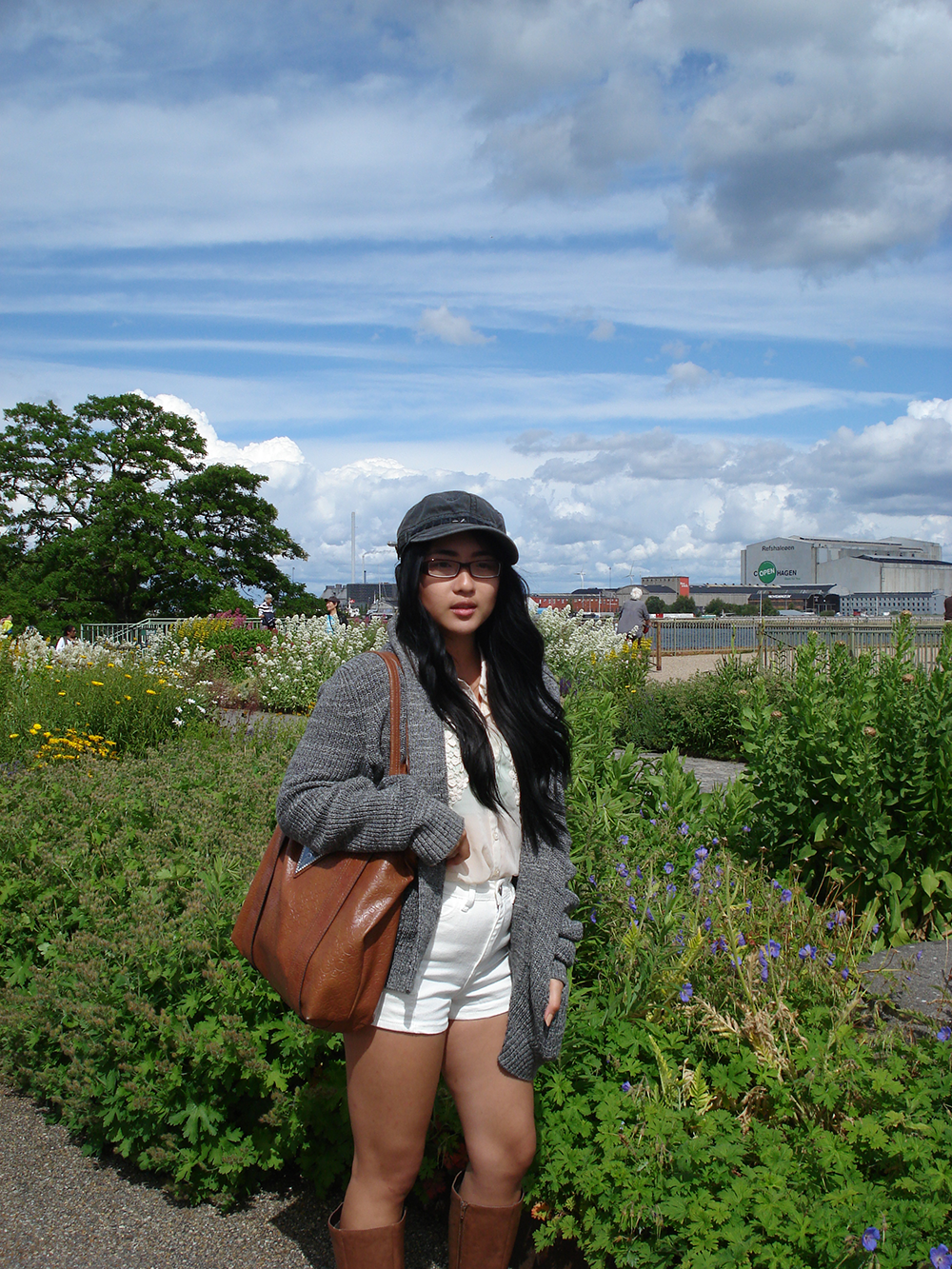 WHITING: Yes, just brilliant, all the bees! And of course we have this problem of the bees, and I'm just so delighted to see them. Isn't it fantastic?

PALMER: Well that's actually part of their thinking, that it provides habitat for insects and everything.

WHITING: Yes, and you can see it’s working. I just love all this; I really do.

CHEN: I think it's not a new idea, definitely you know Tokyo, Japan, like they've been doing it for years. And a lot of Asian cities, they started doing the same thing, and I'm glad you know Copenhagen is doing it as well, you know.

PALMER: Do you think it has an affect on how people feel?

CHEN: Well definitely green is a good color. You know, it brings positive messages, and it's great contrast with the industrial area just right across the canal obviously. So, you know, I think it’s a really nice change.

[BIRDS CHIRPING]
PALMER: And in the end, maybe that's the message: a green city with green roofs can blunt some effects of global warming by soaking up excess rain and sucking up excess carbon and certainly by cheering up the people who live there and visit.

For Living on Earth, I'm Helen Palmer in Copenhagen, Denmark.

Per Malmos’ company helps to install green landscapes and facilities around Copenhagen.