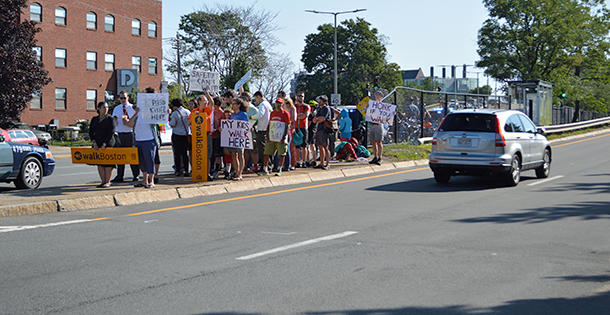 Harry Mattison and residents of Boston’s Allston neighborhood march at the Rally for a Safer Cambridge Street on July 28, 2014. (Photo: Jake Lucas)

After the Second World War, planners built roads with wide lanes and high speed limits to accommodate trucks carrying goods. But these wide fast roads were unfriendly to pedestrians and cyclists in towns and cities, and as Living on Earth’s Jake Lucas reports, cities are redesigning streets with people in mind. The concept of “Complete Streets” is taking hold all over, including Boston’s Allston neighborhood.

CURWOOD: It's Living on Earth. I'm Steve Curwood. Across the country, in big cities and rural towns alike, many places are making streets friendlier for the people who use them. The policies behind those changes are new, but the problems and complaints they’re addressing are often as old as the roads they aim to fix. That’s the case in Boston, where one particularly troublesome road is getting a makeover. Living on Earth’s Jake Lucas has our report.

LUCAS: On a bright Tuesday morning, in Boston’s western neighborhood of Allston, a small group of locals with picket signs crowds onto a little wedge of concrete. They’re standing on Cambridge Street, right where a highway on-ramp splits off from the fiercely busy six-lane road that has been a sore point for years.

MATTISON: Cambridge Street is a street that’s a crucial link in our neighborhood, and it’s also an incredibly unsafe, dangerous street.

LUCAS: That’s Harry Mattison, a 31-year-old software developer who’s a longtime advocate for pedestrian and cyclist rights in the area. Since Cambridge Street was last redesigned 50 years ago, it’s been high on the list of residents’ complaints, and with good reason.

Two pedestrians were killed here in the last two years. And one of those accidents happened just a few weeks before this rally, when a car hit a man as he tried to cross from the on-ramp to where the protesters are standing now.

They’re holding signs with messages like “My kids walk here,” and they’re demanding a safer Cambridge Street. Mattison has three kids, and laments not feeling safe on a street that cuts through the heart of his own neighborhood.

MATTISON: I want to be able to walk with my kids, to bike with my kids, to drive safely in the neighborhood where I live, and we just can’t do that today because this street is so poorly designed and so unsafe.

LUCAS: The city is already working on a short-term fix to make Cambridge Street safer. But in the long term, the transportation department has bigger plans. It’s going to bring the street into the modern day and transform it using the principles of what’s called a “complete street.” Complete streets look different in different places, but the idea’s simple - make transportation systems about people, so there’s equal access for all forms of travel and all people.

Boston’s Transportation Department has its own complete street guidelines. The head of policy and planning, Vineet Gupta, says that in Boston, every street redesign will include a handful of features from a menu of possibilities. 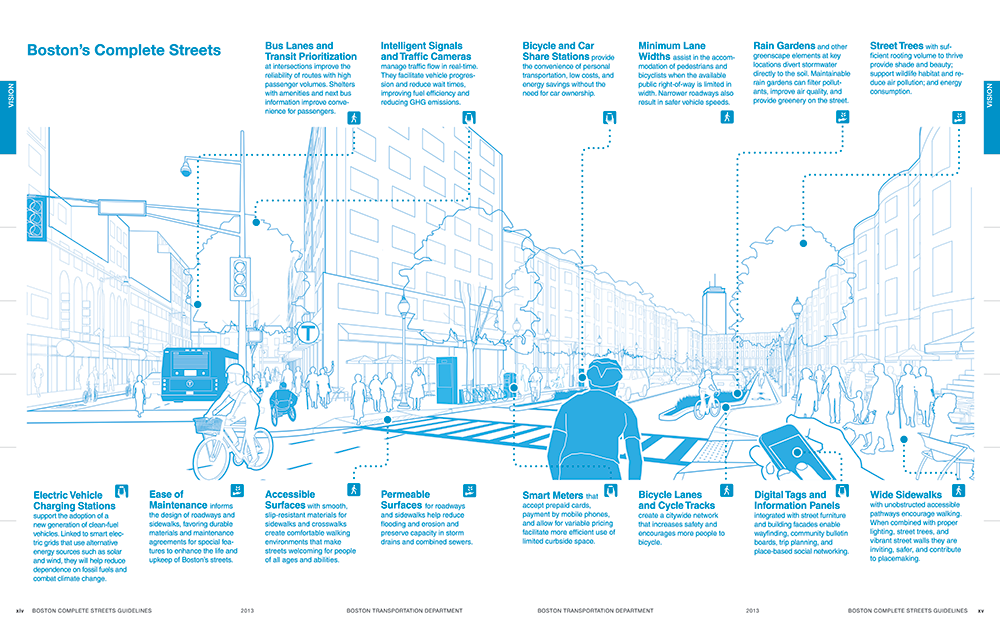 The “menu” of different options that could be included in a street redesign in Boston. (Photo: Courtesy of the Boston Transportation Department)

GUPTA: Any street that’s going through a redesign process will have some elements of complete streets in it based on its size, based on what the community wants and based on where it’s located.

LUCAS: In some places that’s as simple as narrowing the road by adding a bike lane. Projects with more room and better funding, like Cambridge Street, might also allow for things like new bike sharing stations, more trees along the street or smart parking meters that direct drivers to open spaces. The final design will be tailored toward the wants and needs of the people who use it. Here’s Vineet Gupta again.

GUPTA: There may be some streets, for example, where wide sidewalks are really important because restaurant owners want to see cafes opening onto those wide sidewalks. That might mean that the bicycle facility is not a cycle track, but just a bicycle lane. There are some streets that see more bus traffic than others, and maybe that’s a street where exclusive bus lanes are most important, at the expense of a bike lane.

LUCAS: Designing streets according to how people use them makes sense, but that marks a major change in the way we think about how we get around. When Cambridge Street was built, highway engineers had one aim in mind. Here’s Stefanie Seskin, the deputy director of the National Complete Streets Coalition.

SESKIN: Post World War II, we embarked in the United States and in many other countries, on a massive infrastructure investment to move goods really across the country. And that had a lot of really important and good changes to the way that we built our roads in terms of safety, when you’re travelling at high speeds, when you’re thinking about trucks and how they move.

LUCAS: But Seskin says while wide lanes make highways and other high-speed roads safer for traffic using them, they were never meant for cities and town centers. And yet city streets were built the same way as those high-speed roads. Vineet Gupta of Boston’s Transportation Department says that post-war engineering mentality explains why Cambridge Street is so bad for pedestrians today.

GUPTA: In those days, all they cared about was moving traffic and making traffic flow more efficient, and really not focusing on what cities really are, and what makes them livable.

LUCAS: That’s where people-oriented complete streets are different, and the idea has been gaining traction around the country. The National Complete Streets Coalition says that the number of places with complete street policies leaped from 86 in 2008 to 610 last year. Stephanie Seskin has noticed. 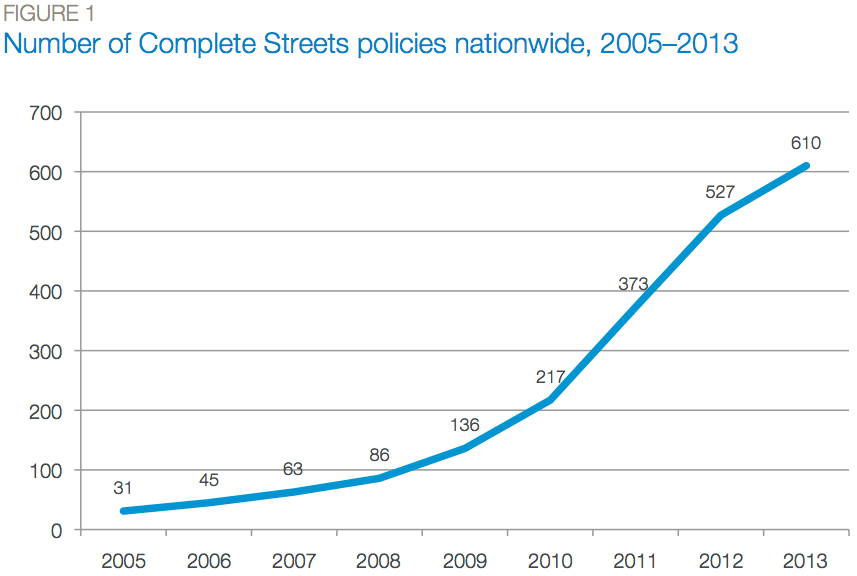 The “Complete Street” movement is gaining national traction and the number of complete street policies over the past few years has shot up. (Photo: Courtesy of the National Complete Streets Coalition)

SESKIN: The last five years have definitely been an explosion of interest in this, from all sectors.

LUCAS: And now there’s a federal complete streets policy in the works. The Safe Streets Act is under consideration in both the House and the Senate. The act would require all federally-funded transportation projects to comply with complete street principles that Seskin calls pretty close to ideal. The idea of cites and streets planned around people isn’t new. Vineet Gupta points out that many areas of Boston, like the Rose F. Kennedy Greenway and the North End, are already pedestrian-friendly. But in other cities, Stephanie Seskin says the name “complete streets” has helped those ideas catch on.

SESKIN: The complete streets movement really got a lot of traction because it put a nice name on this more abstract idea that lots of people had for what they wanted in their communities. You know that, “We don’t want to have to drive everywhere. We do want choices, and we want it to be safe. And we want our kids to have the opportunity to ride their bikes in our neighborhood without the parents worrying about it.”

LUCAS: That sounds just like what Harry Mattison and other Allston residents are asking of the city. Their signs demand a street where they can bike and walk safely with their kids. And half a decade after the last redesign of Cambridge Street, the City of Boston is giving them one. Though it may not be until the end of the decade that a complete Cambridge Street is actually completed. For Living on Earth, I’m Jake Lucas in Boston.