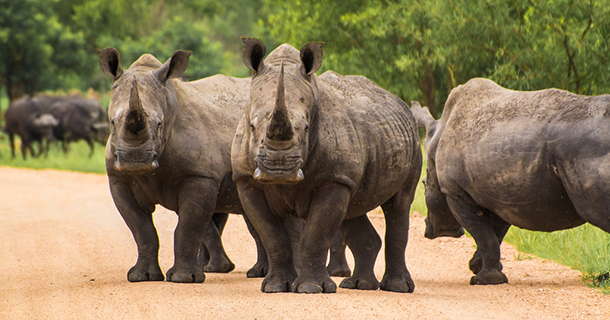 Poaching for rhino’s horns has left the species on the brink of extinction. (Photo: brainstorm1984; Flickr CC BY-ND 2.0)

Poaching African rhinoceros for their horns has pushed to them to brink of extinction. Today, there are only 25,000 rhinos left in the world, 85-percent of them in South Africa. Now a national park there is selling off some of its rhinos to relocate and protect them. Bobby Bascomb reports from Pilanesberg National Park.

CURWOOD: Now few people could say that rhinos are cuddly, but they are a majestic keystone species of the African savannah. They are also severely threatened by the demand for rhinoceros horn from wealthy consumers in Asia, and their numbers are now reduced to a mere 25,000. Over 85 percent of the world’s rhinos live in South Africa, mostly in game parks – but that does not necessarily protect them; Kruger National Park, South Africa’s largest reserve, has lost nearly 600 rhinos this year to poachers. Park officials have considered many schemes to protect the rhinos: from poisoning the horns to humanely removing them, and now the park is selling off some of its rhinos in the hope of protecting them. Bobby Bascomb reports from Pilanesberg National Park in South Africa. 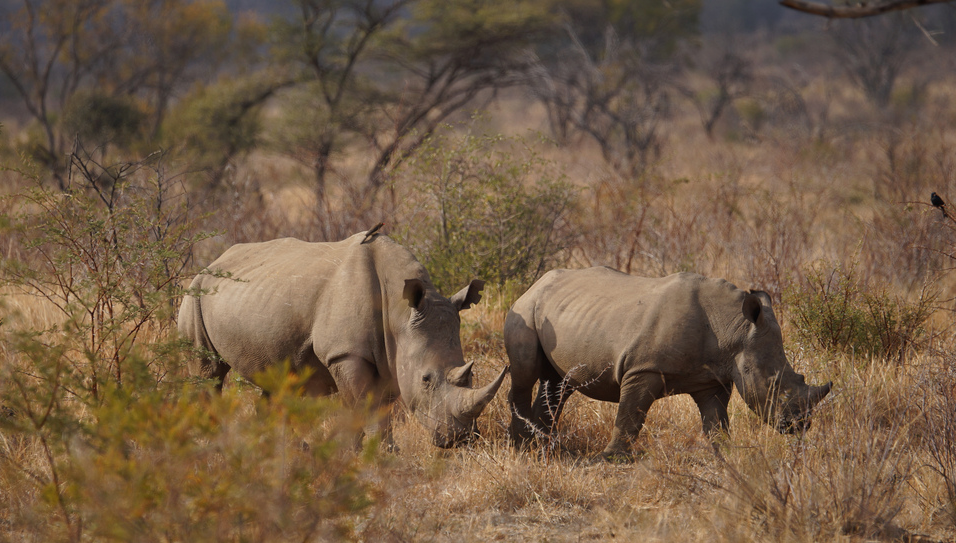 There are only 25,000 rhinos left in the world, most of which live in South Africa. (Photo: Dion Hinchcliffe; Flickr CC BY-SA 2.0)

BASCOMB: A red dirt path cuts through the savannah of the Black Rhino Game Reserve in South Africa’s Pilanesberg National Park. Michael Joubert, Co-owner of the reserve, bumps along in the back of a safari truck and points across a wide expanse of knee-high dried grass towards the anti-poaching unit charged with protecting the conservation land’s rhinos.

JOUBERT: Right on that hill about half a kilometer in front of us on the right, that’s usually where they are stationed. They always try to find the highest place in the reserve and then they’ll change their sort of patrol tracks because they don’t want any kind of routine because then it can be learned.

BASCOMB: The anti-poaching units are similar to military personnel and the job is just as dangerous.

JOUBERT: These guys, when they come on they’ve got snipers and they’ve got AK47s and they have weapons that can’t match what the anti-poaching guys have. It’s almost like an unprotected war zone.

BASCOMB: Black Rhino Game Reserve lost three rhinos to poaching this year, all of them within 100 meters of the road. It’s a dangerous place for rhinos and the people protecting them but it’s still far safer than the country’s largest park, Kruger National Park. Roughly 530 kilometers east of Pilanesberg, Kruger is home to more than 8000 rhinos, the single largest population in the world. But they are losing them at an unsustainable rate - between one and two a day are killed by poachers. Now the park is trying to sell off some of its rhinos to places like Black Rhino Game Reserve in the hope that they might find safer sanctuary. Howard Hendricks, from the South African National Parks conservation services explains. 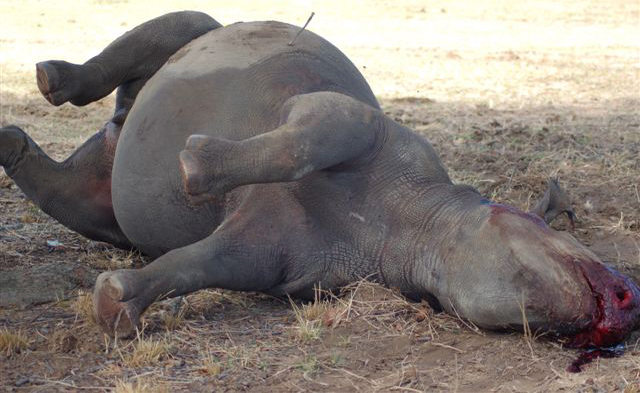 Poachers tranquilized a pregnant black rhino and removed her horn. In order to do so, they cut into her skull and then left her to bleed to death. (Photo: Sokwanele-Zimbabwe; Flickr CC BY-NC-SA 2.0)

HENDRICKS: Our translocation program is aimed at translocating rhinos from hotspots - poaching hotspots - to areas of high levels of security.

BASCOMB: Kruger Park is a poaching hotspot for several reasons. First, it’s huge - more than 19,000 square kilometers, about the size of the country of Wales, and difficult to manage.

[RANGER TALKING ON THE RADIO]

An even bigger problem though is the long porous border Kruger shares with neighboring Mozambique. Until recently, the penalty for poaching in Mozambique was a small fine that rarely got paid. As a result, Hendricks says roughly 80 to 90 percent of poachers in Kruger Park are from Mozambique, one of the poorest countries in the world.

HENDRICKS: Poaching takes advantage of the high level of poverty around Kruger. Poaching is a problem simply because there’s high monetary values involved. If someone is poor then obviously it’s an easy access to money. 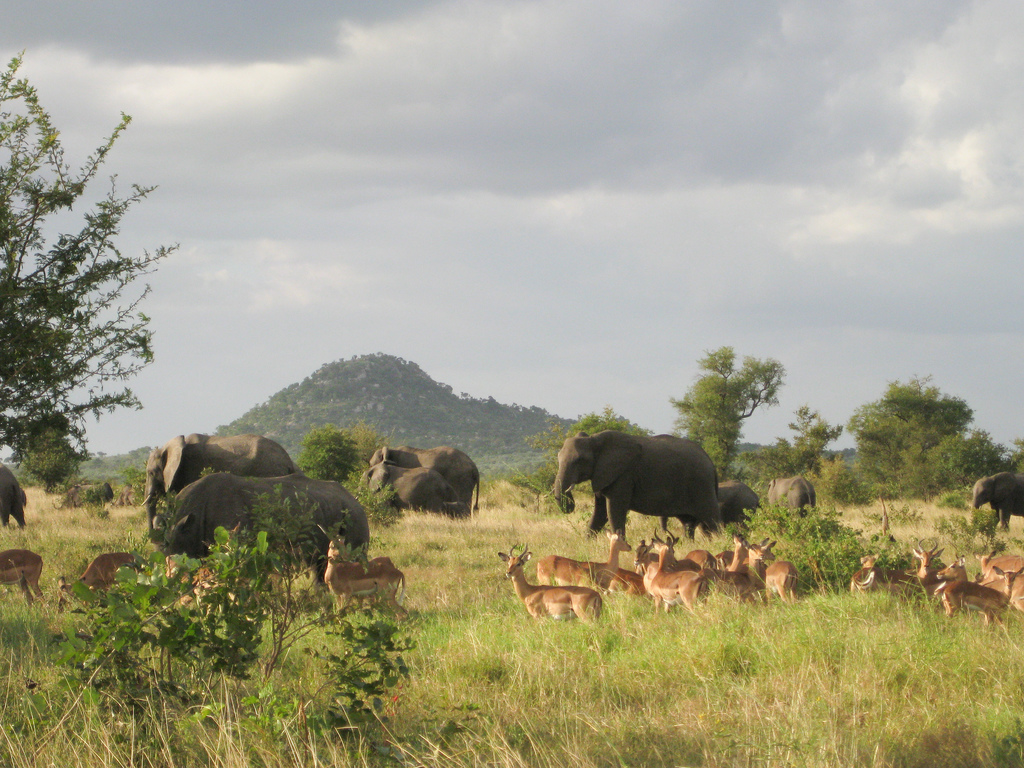 BASCOMB: It’s estimated that rhino horn is worth more than 1 million Rand, or $90,000 per kilo - although it’s difficult to confirm that figure. It is the black market after all and conservation groups don’t like to advertise its value, fearing it will spur more interest in poaching. In any case, poaching is a high-stakes multi-billion dollar industry. Again, Michael Joubert from Black Rhino Game Reserve.

JOUBERT: Per kilo it’s worth more than cocaine, gold, platinum, anything like that. It’s run professionally by crime organizations, similar to a drug cartel or anything.

BASCOMB: Earlier this year a ranger and two staff at Kruger Park were arrested for rhino poaching. One rhino horn could be worth nearly a lifetime in wages for anti-poaching units.

JOUBERT: The heartbreaking reality is they aren’t paid well at all. Just as police and law enforcement and teachers and stuff - these jobs that should have a high paying salary the truth is they don’t.

BASCOMB: Joubert says the trick is to hire guards that genuinely care about the animals and feel passionate about protecting them. Rhino horn can be humanely removed without hurting the animals, much like cutting your fingernails. But the thickest, widest part of the horn is embedded in the rhino’s skull.

JOUBERT: They want every gram of the horn. They’ll actually saw into the skull. And they don’t kill the rhino beforehand, they tranquilize them first so the rhino goes to sleep, they remove the horn, then the rhino eventually wakes up traumatized...it’s got this massive hole in its skull and then it actually bleeds to death. So it’s just so sad. 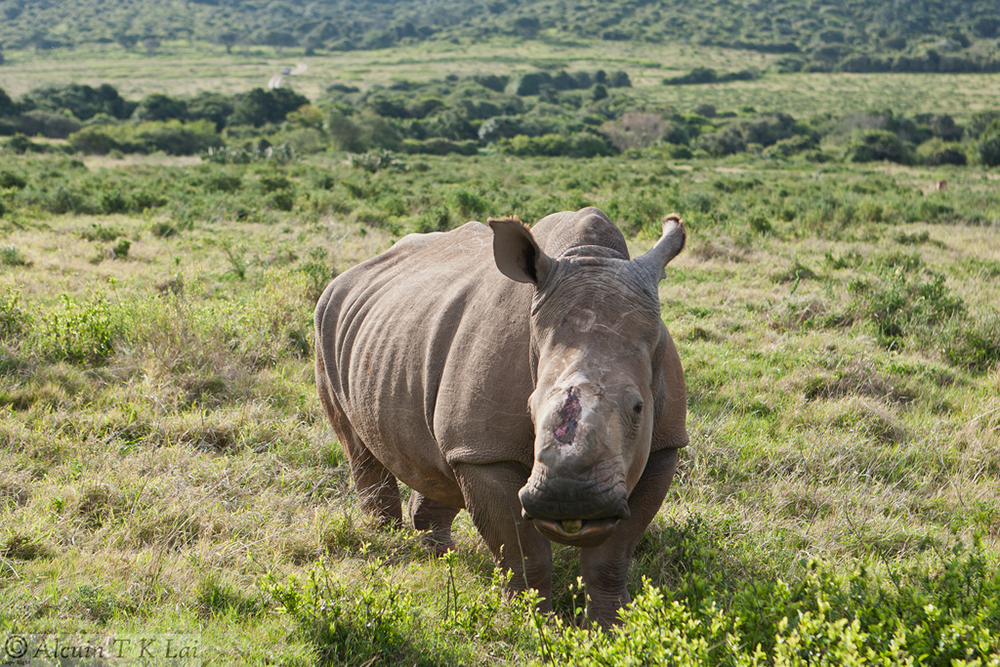 In some of the world’s poorest countries poaching and selling rhino horns on the black market is big business. (Photo: alcuin lai; Flickr CC BY-SA 2.0)

BASCOMB: Rhinos are in a sad state today and scientists worry that the number of rhinos being killed will soon exceed the number being born, threatening the species with extinction in the coming decades. But Jo Shaw, manager of the rhino program for World Wildlife Fund in South Africa, says the sale and translocation of rhinos being proposed has a proven track record for protecting the animals.

SHAW: At the turn of the 19th century there were only maybe 50 Southern White Rhinos left in the world in just one park in South Africa. And it was the movement of these animals to new areas like Kruger Park that grew the numbers that we see today. So, including this strategy to combat rhino poaching is actually really a tried and tested approach to combating this kind of threat.

BASCOMB: Kruger Park officials are still working out the details of their translocation sale, but observers like World Wildlife Fund are hopeful that moving some rhinos from poaching hotspots will be a step in the right direction towards saving one of Africa’s most iconic species.

CURWOOD: That report came to us from Radio Deutsche Welle.