Beinecke's Message of Hope for a Planet In Peril 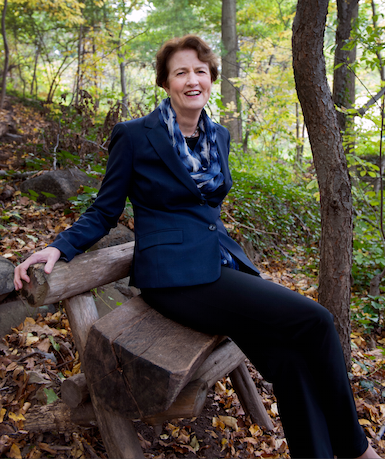 After four decades of working for the Natural Resources Defense Council, its president Frances Beinecke is stepping down. Host Steve Curwood discusses her life, and her new book, The World We Create, with its message of hope for the future of the environmental movement and the Earth.

CURWOOD: For 40 years, Frances Beinecke has been involved with the urgent need to protect our environment. She first worked as an intern at the Natural Resources Defense Council back when it was getting started…and stayed. For the past eight years she's been NRDC's President and for eight years before that she was executive director. Now, she's stepping down and has written “The World We Create”, a book subtitled “A Message of Hope for a Planet in Peril.” Welcome to Living on Earth, Frances.

BEINECKE: Well thank you, Steve, it's so great to be here. 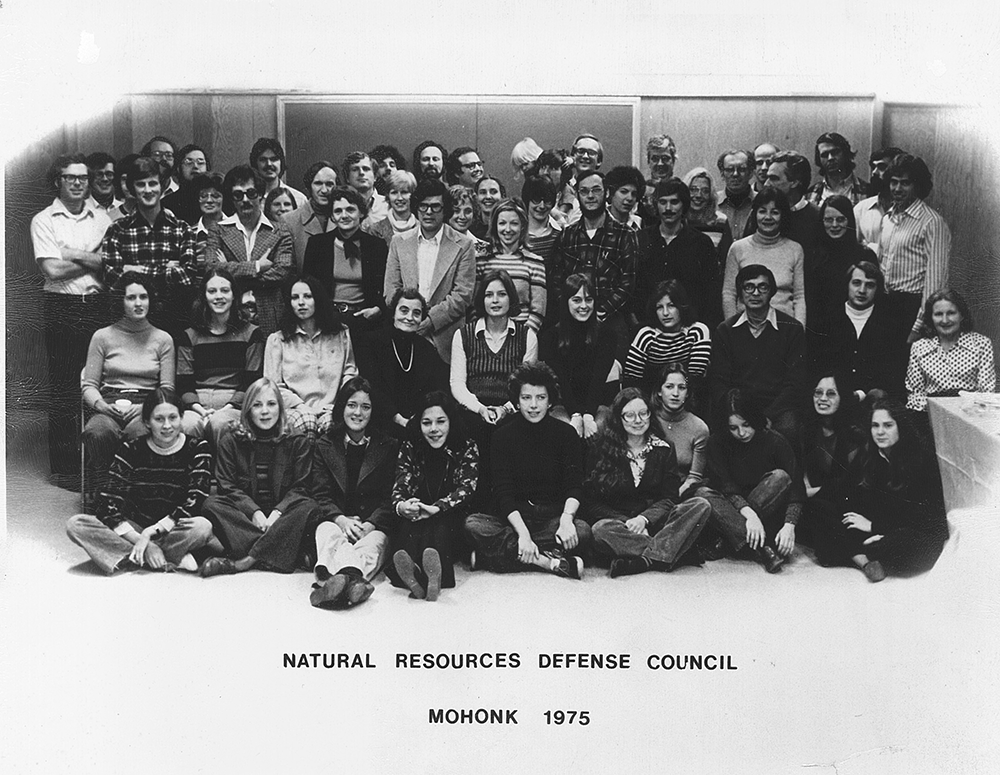 Frances Beinecke joined the NRDC as an intern in 1973. She is shown here in a staff photo taken five years after the organization’s founding, in the 2nd row, 1st on the left. (Photo: courtesy of NRDC)

CURWOOD: Well, let's go back. Your early life gave you a love of nature and the US landscape, a house in the Adirondacks; your father taught you to fish, you were a keen hiker.

BEINECKE: You know, I was able to see a lot of the American landscape when I was very young, which really caught my attention, and really I think created a passion, and then when I was in college and later on I became a very avid hiker and a lover of nature, so it sort of came on throughout my childhood.

CURWOOD: So you were a student back in the 60s and 70s. It was exciting times for the environmental movement: Earth Day, new laws for clean air and water, and a great time for activism. How did that affect you? BEINECKE: It really affected me very, very significantly. So when I got to college in 1968, that was really at the beginning of the very strong anti-war movement and I was swept up in that. We went to Washington, we joined marches, we were on strike at our universities. I think that for me, that really formed my commitment to social change and to civic engagement.

CURWOOD: Given the current climate crisis, how much of the spirit of the ’60s and ’70s do we need today, do you think?

BEINECKE: Well, first of all, we really need it, and the thing I'm really heartened by is it's coming back. People are both rising up, they're raising their voices, and they're also looking at what are the alternatives, what are the clean energy pathways that we need to go down?

CURWOOD: You were, of course, a member of the president's commission on the BP Macondo well disaster. The commission's final report was critical of just about everybody involved in that. What's your biggest takeaway from that experience, looking at how the fossil fuel industry conducts itself?

BEINECKE: Well, my biggest takeaway, which was not new, but it was a potent reminder of how immensely powerful the oil industry is. It was a reminder that they basically own the game, and if we don't have the system of laws and oversight and enforcement of the environment, the public wellbeing and the economy of people who are living near their operations are at risk. It just doubled my resolve to ensure that we have a system of safeguards. 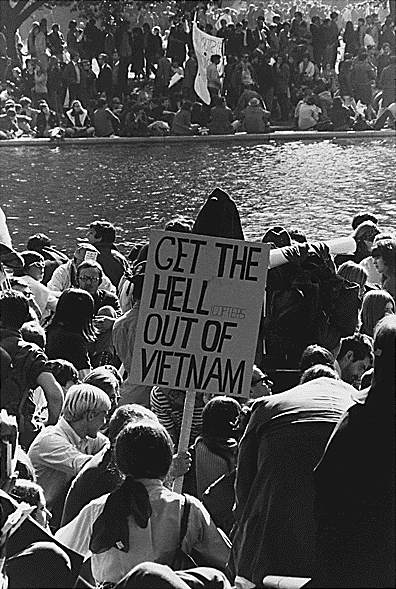 CURWOOD: Now, for a number of years NRDC, the organization that you're the retiring president of, was at the forefront and try to get a cap-and-trade through Capitol Hill. It didn't work. What do you think went wrong and what you think needs to be done now?

BEINECKE: It didn't pass for a lot of reasons, I think first and foremost it was the downturn in the economy that really made it very difficult to get something as sweeping as that passed. But one thing coming out of that was it did not alter our resolve at all because climate is such an important and urgent matter. It really made us double down and look seriously at what are the strategies that we needed, where did need to make the investment to really build the public case and support for action on climate, and now what we're focused on is using the authority of the Clean Air Act under the executive authority of the president to get at our largest source of emissions, which is our power plants across the country, and that's something that you know we hope and we're working hard to achieve in the next two years: adoption of these carbon pollution standards under the Clean Air Act. 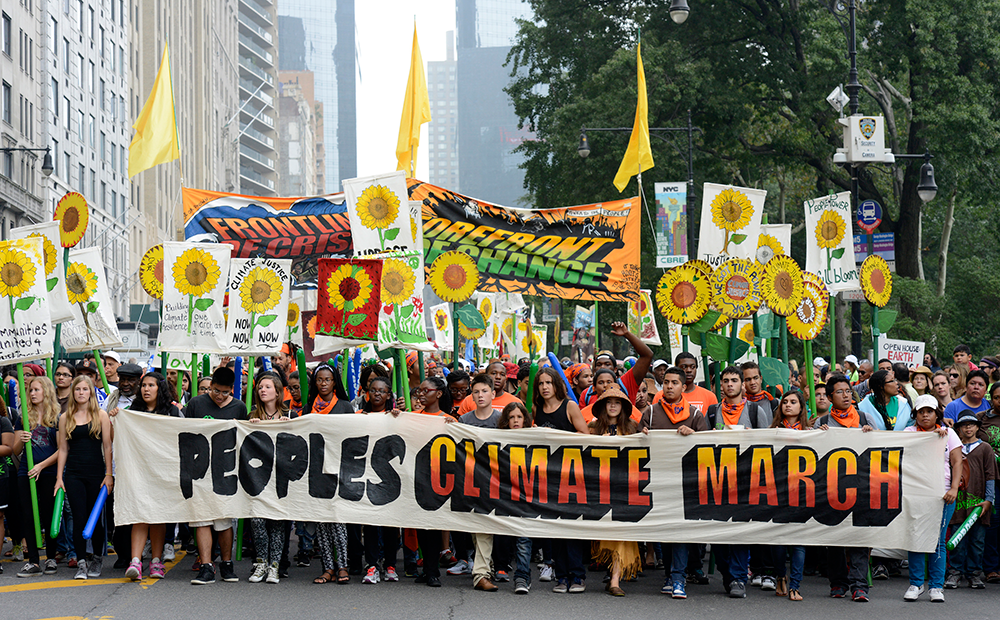 CURWOOD: How fair is it to say that the failure of that cap and trade legislation is a sign that the fossil fuel industry is simply not willing to come half the distance with people who are concerned about climate, that it's their way or the highway?

CURWOOD: So the recent election brought gains for the Republicans. It doesn't look like there's much likelihood of congressional action to take on fossil fuels over the next couple of years, and the new likely Majority Senate Leader, Kentucky's Mitch McConnell, has made it a new top priority to approve, what, the Keystone XL pipeline and defund any carbon controlling measures by the EPA. What's your view? 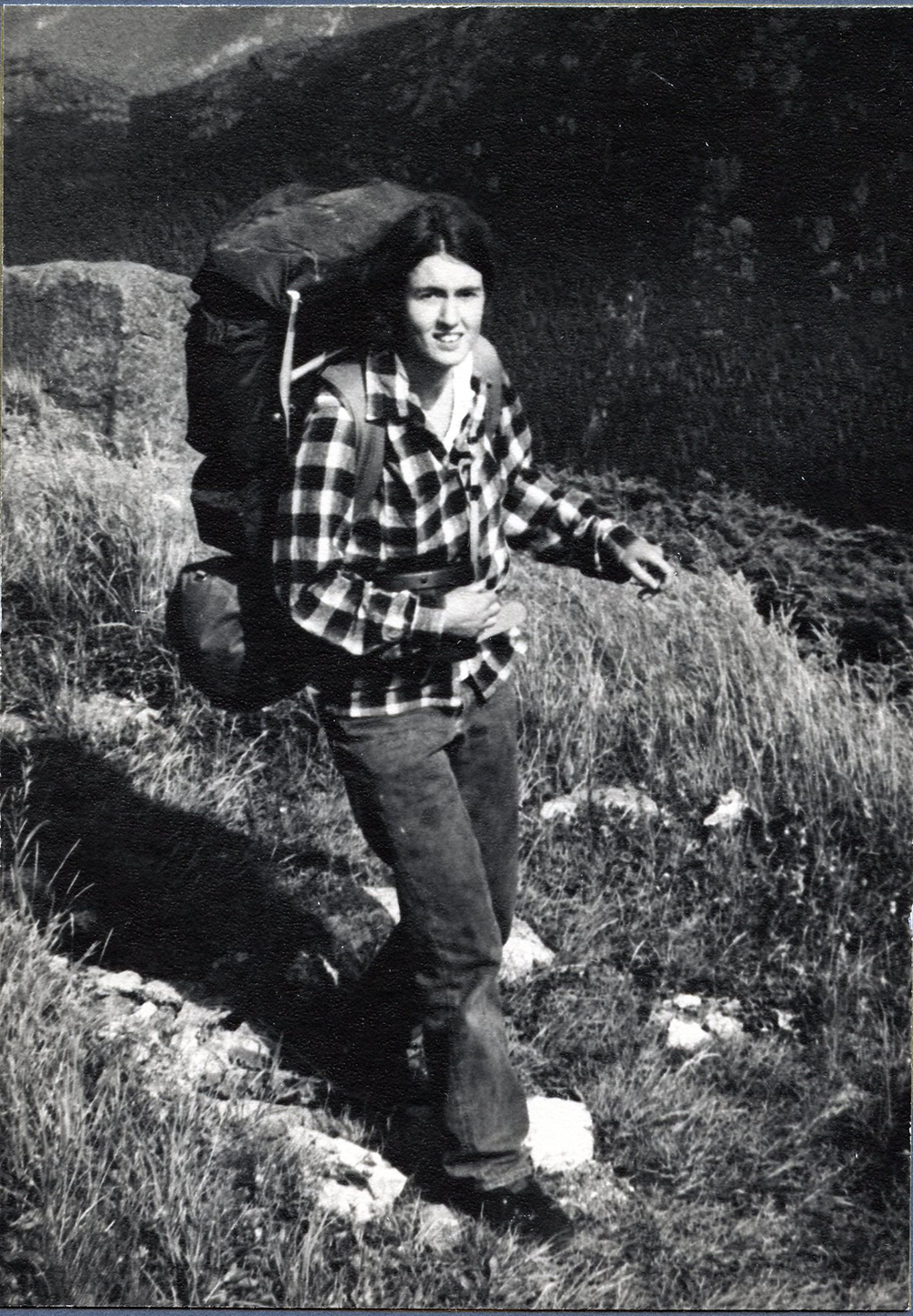 While in college at Yale, Beinecke enjoyed connecting with nature while backpacking. (Photo: Courtesy of NRDC)

BEINECKE: So that is absolutely not what our agenda is, we think it's imperative to act on climate, to reduce emissions, to use the Clean Air Act authority which was upheld by the Supreme Court three times. We realize this is going to be a fight with the Congress and you know that's a fight we're prepared to undertake. We also believe that the President is deeply committed to putting these standards in place and will do everything within his power to ensure they are adopted. This will not be an easy path over the next two years, but it's certainly a path we're going down.

CURWOOD: What kind of backbone rating on climate change would you give the President of the United States? Mr. Obama's first four years there was really not much of a mention about climate. Yes, we did have vehicle emissions standards, mileage standards come forward but he didn't really get up on the bully pulpit until after he was re-elected. How strong is he really on this issue?

BEINECKE: Well, Steve, I think that the President is very strong on the need to act on climate. On June 25, 2013, when he made his speech at Georgetown and really kind of laid the template down for what his climate strategy was going to be, it was very comprehensive. I mean, it included the carbon pollution standards, but it really directed every agency in the federal government to have a very active climate agenda and figure out and take action on what they could do to reduce emissions and move us down a clean energy pathway. He really understands and sees what the long-term threat is to the country and to the planet, and, you know, I think the the US actually is in a very strong position through the fuel efficiency standards that he adopted in the first term to these carbon pollution standards for the power sector to put the US in a leadership position worldwide. You know as you know, the world leaders are going to gather in Paris in 2015 to again reach agreement on how to reduce our emissions from climate change, and I think the US will be going into those conversations from a very strong place. 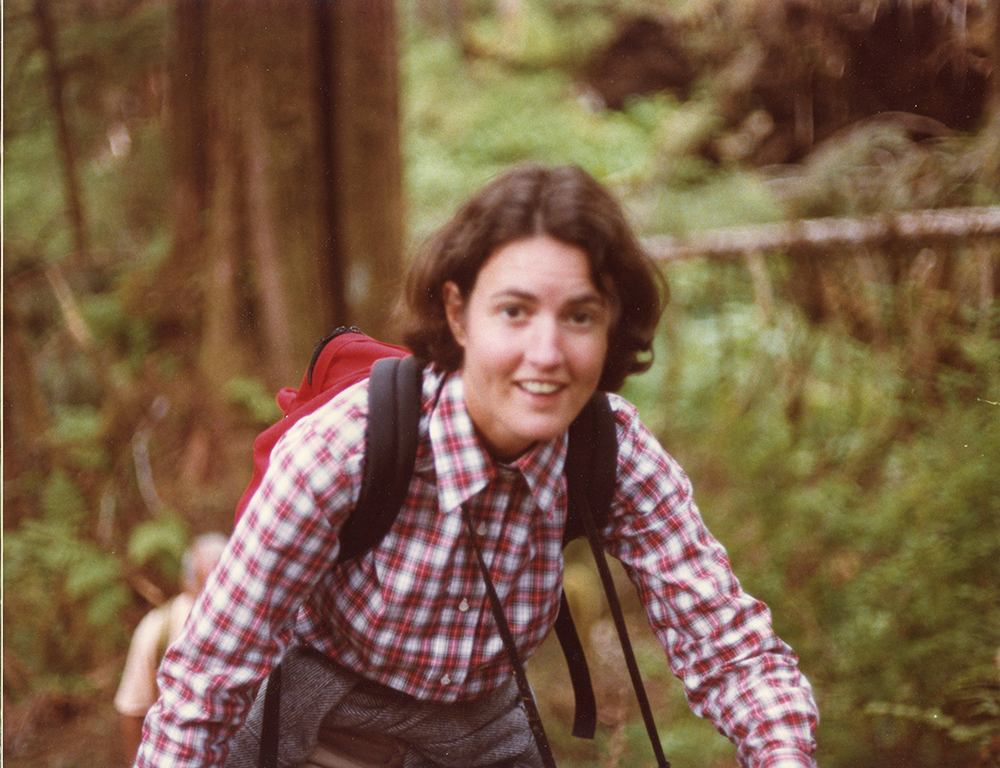 CURWOOD: So since those days where you were an intern and you guys were wondering maybe when the next rent check would come from, NRDC has grown and developed beyond all recognition. What do you think is the most important focus for the NRDC today?

BEINECKE: Well, first of all, NRDC is 43 years old, and we now have 500 people and seven offices, we’re a very large place, but we still have our primary commitment, which is to safeguard the Earth and ensure that all people have a system of environmental protection. Climate change is the very urgent threat that we face every day. We have as many as probably 100 people on NRDC staff working at one aspect or another of curbing emissions and unleashing clean energy and people in our oceans program, our land program, our public health program are working on all aspects of this very serious threat, and are very focused on what are the solutions we have to put in place as well as making sure that people are aware of how very urgent this threat is. 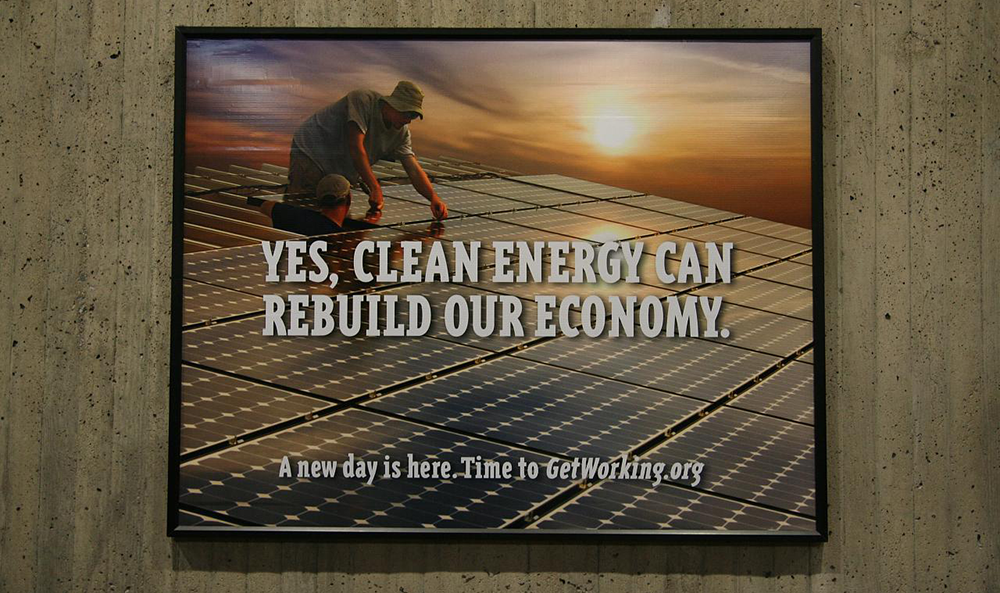 In 2009, the NRDC joined more than 60 organizations to form the Clean Energy Works coalition, advocating “unleashing clean energy” as a strategy for mitigating the climate crisis. (Photo: Courtesy of NRDC)

CURWOOD: The subtitle of your book, Frances, is "A Message of Hope". Now, of course, we're looking at the latest UN reports that paint a fairly dire portrait of the state of the planet and the climate. Where is it that you find hope?

BEINECKE: Well, where I find hope, Steve, is in the engagement of people. Just looking at the last three years, the number of people who are now understanding what the consequences of fossil fuel development is to them and wanting to go down a different pathway, whether it's the frackivists in New York where are very loud and determined not to allow fracking here, to the farmers in Nebraska who live along the Keystone pipeline, to the people all across the gulf whose businesses, whether the fishing industry or the tourism industry or even the oil industry, were put out of business because of the Macondo disaster. One of the most heartening things to me was the climate march in New York City in September where over 400,000 people joined together to demand climate action. And those 400,000 people were just a tip of an iceberg that's growing across the country of people demanding action on clean energy and, at the same time, there is a tremendous amount of clean energy being developed around the country. There's wind farms, solar arrays, in state after state after state, and there are people who are employed in those industries, who are making money in those industries who see this as a huge opportunity for the country, so it's both in the voices raised and in the economic opportunity that's been created that I see hope.

CURWOOD: Frances Beinecke is the retiring President of the Natural Resources Defense Council and the author of the new book "The World We Create: A Message of Hope for a Planet in Peril”. Frances, thanks for taking the time today.

BEINECKE: Thanks, Steve, it's a pleasure to be here. 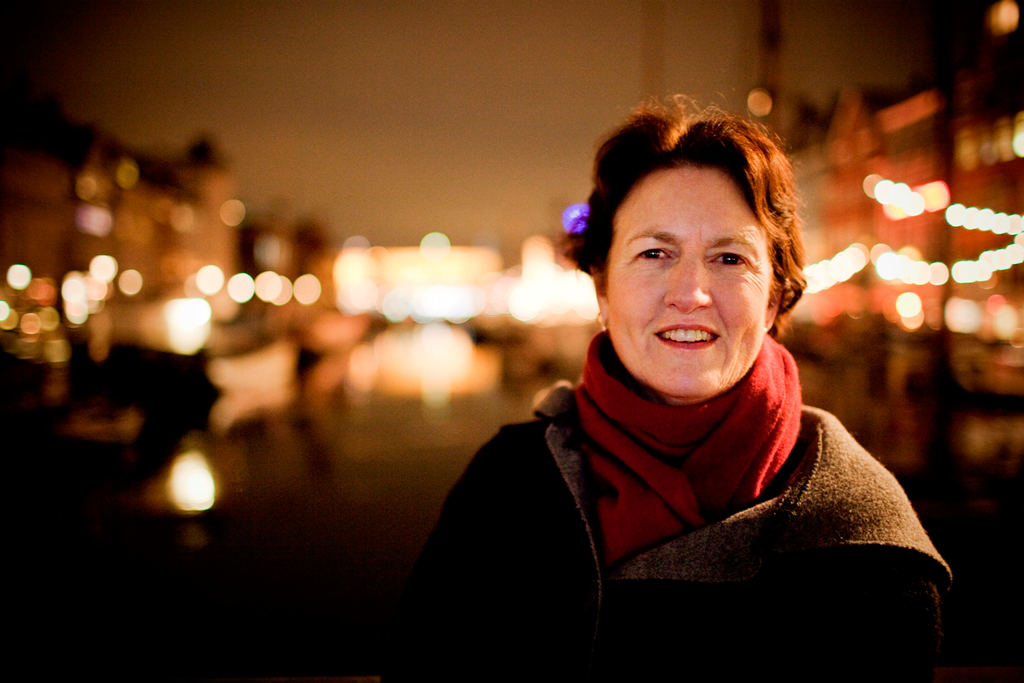 Frances Beinecke retires after more than forty years at the NRDC. (Photo: Courtesy of NRDC)


Frances Beinecke’s NRDC blog about her book, The World We Create